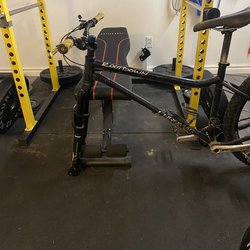 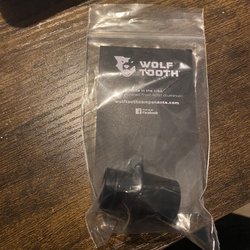 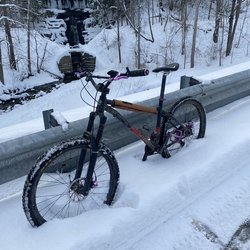 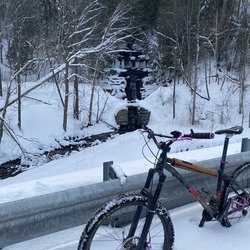 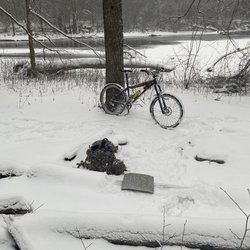 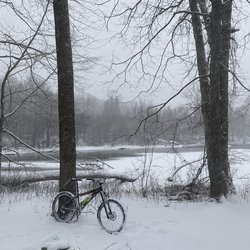 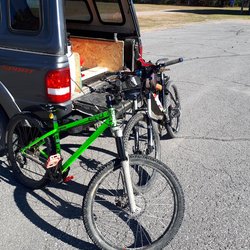 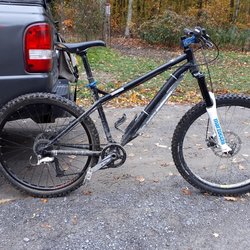 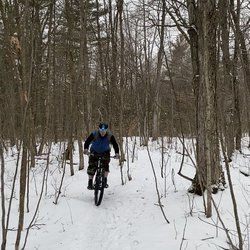 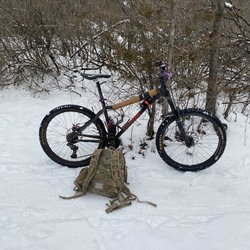 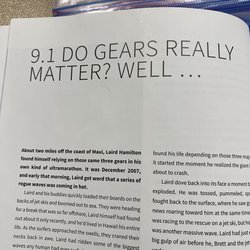 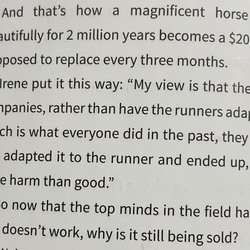 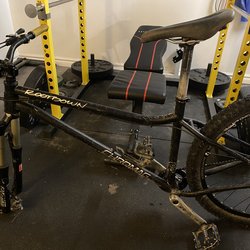 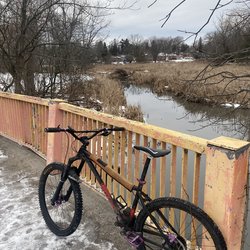 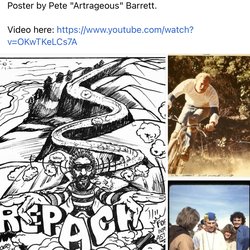 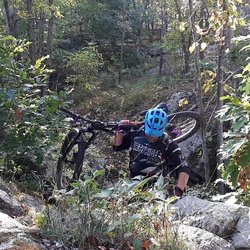 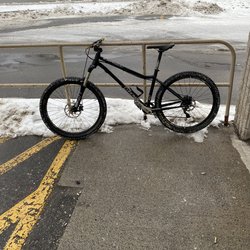 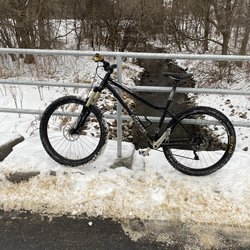 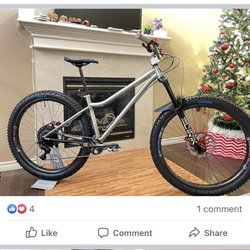 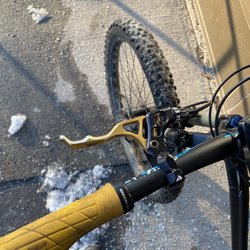 Andy, the pain and such issues is a valid point in figuring out how to carry water and such. Myself was advised by medical side to figure out ways to carry more stuff on the bike as a way to decrease the effects on the long term injuries. Had just started but on hold while heal from surgery.

Always carry one of those Lifestraw filters now.

Found this company recently that has their ideas for solutions. Even has a system that allows one to use 1L or bigger Nalgene bottles.

LOL...have driven three different versions of the CUCV back in the early 1990's.  Even used the CUCV Amb as a camper while on ex. Benefits of being the driver. LOL

Andrew, Just did a drivetrain swap a week and a half ago on the Wideangle.  8 speed rear cassette with thumbshifter. Don't really notice any difference between it and the 10 speed had on earlier. Though would say that depending on where one lives and terrain the gearing will be different to meet those needs.

Andrew, got the Bell Super DH end of summer 2020. After getting taken out and left to die by a driver in 2019 noticed in 2020 in certain riding areas was overthinking everything due to PTSI and everything else with it. Kinda concerning when you realize those things are going to get you hurt despite you knowing how to ride terrain. Decided to pick up a Super DH with the removable chin bar you know to try a way to work around the PTSI caused overthinking. If it didn't help well hey have a helmet covered by insurance for destroyed property. End result this year is that those places where had issues because of PTSI and overthinking volume as I call it helped get the volume down from 9 to a 2-3. And riding improved just by trying a different method to manage the mess in my head.

The Stylus was a heavier bike compared to the Wideangle

"The Stylus is the bruiser of the fleet. Featuring aggressive, low slung geometry, the Stylus is built around our most robust chromoly tubeset."

"The Wideangle is our lightest, most nimble 27.5" machine."

It does. Admit was more using the weight in hand feel as reference. But to me if was to go back to the whole one bike for everything situation would lean to the Stylus as it can take more in the end as it was built for it. Where as the Wideangle or Rootdown is the second bike choice for more general riding shall we say more leaning to XC and more moderate trails. At least that is how view the frames.

On the bright side, the frame has now been replaced with a new Stylus!

At least the story has a happy ending. Enjoy the new ride.

Vik, one thing I should note. While didn’t hang from the neck to weigh them. But by simple picking them up before put Surly bar on the Stylus. The Stylus was a heavier bike compared to the Wideangle. Kind of suspect that if one was a Clydesdale or a rider who was hard on bikes the Stylus would be the general choice.

Even the Rootdown feels lighter than the Stylus before the bar swap. So think it leans more like the Wideangle to the more XC and general riding side. This is ironically what my Rootdown is kinda aimed at.

Front hub adapter arrived and installed the actual fork. Steer tube might be long enough to not go the route of the Stylus bar wise. 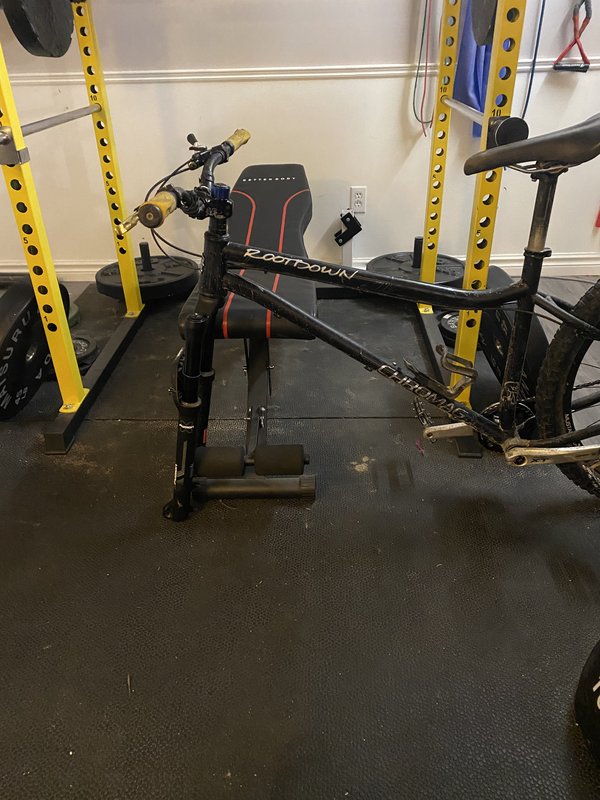 Wolftooth adapter for the win. 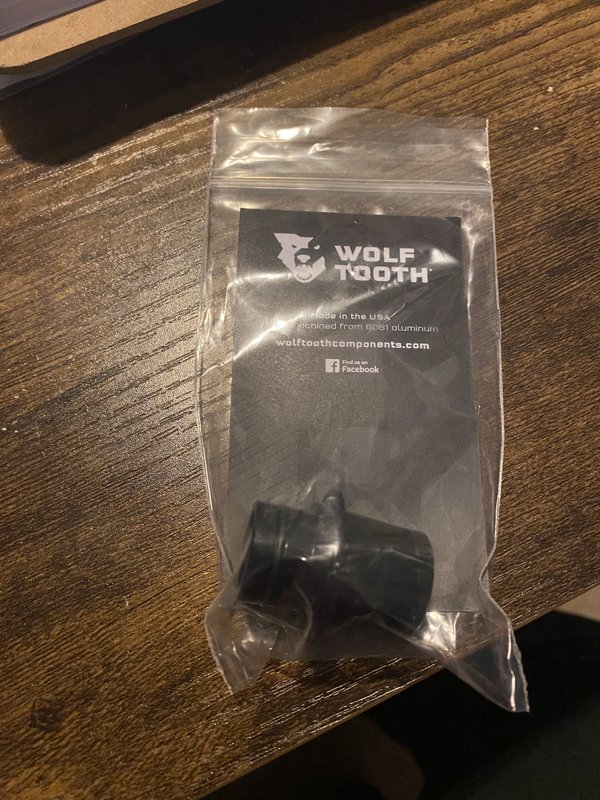 Not leaning. Enough snow that it holds up the bike. LOL Trails are buried in Orlean's near Ottawa. So wandered around for a bit on sidewalks and side streets. 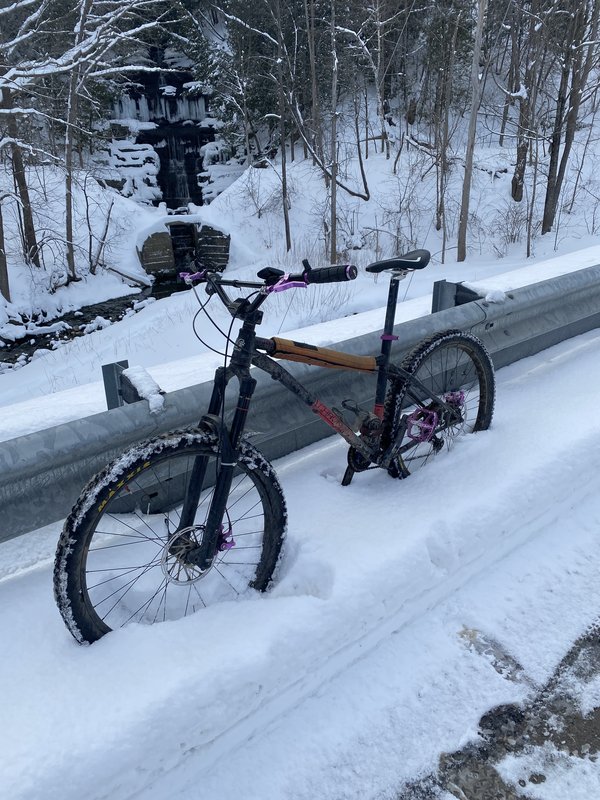 Such a great view from the ridge on the Hornby trails. It never disappoints. Thanks for the ride suggestion Niels. I napped when I got home and then slept well last night. Today is a rest day and I'll go MOAR old man mode by swapping in some higher rise bars. This was my longest ride on the Moxie and the bars were a bit lower than my upper body wanted.

Speaking of Hornby that used to be where the Hornby island Bike Fest and races happened. Think some of  it was on Fabrizio "Tig" Cross' parents property there. Little known fact....one year they had the BC MTB Champs there can't recall the year but Geoff Kabush the XC racer won the DH provincial title one year.

*spews beverage out of nose*

LOL.  Free.. pffttt. And the health care provided by the Ontario Ministry of Unhealthcare was a mess long before Doug Ford,  Lots of scary little details that no one knows about.

And in some departments the beat healthcare practice is to encourage those needing help to seek MAID.

In the middle of todays snowstorm and the first Snow Lightning Flash. 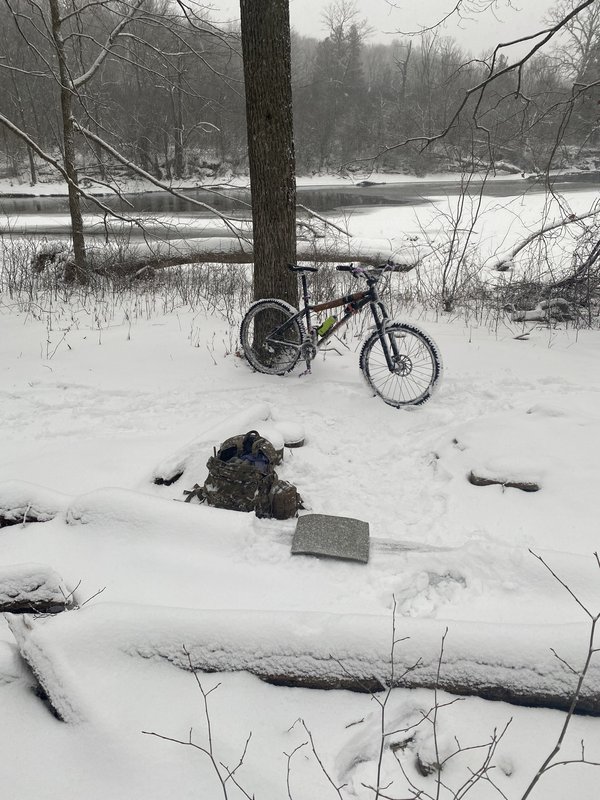 I feel like a idiot because I couldn't figure out why they were so freaked out sliding around on the trails. I'm taking inspiration from Andrew to give them proper gear like I'd want to have fun times. We'll see when it warms up enough for them to want to go ride bikes with me! :)

Young people and new riders need good gear. The old paradigm of putting the least capable folks on the worst gear made no sense. My GF's first ever MTB was a Santa Cruz Nomad.  It was the same brand/model my buddy and I rode so when she was on the trail she knew she was on the same equipment as us. Looking back I am really glad we made that choice instead of getting her some sort of introductory bike. Especially given the savagely technical trails she had to learn to ride on.

Why a while ago had found a Gary Fisher hardtail and stripped it of all the crappy parts and rebuilt it for my daughter. When she outgrew it she eventually took over daddies NS Surge. Which for a bit prior was the one my wife borrowed on the rare occasion we rode together, 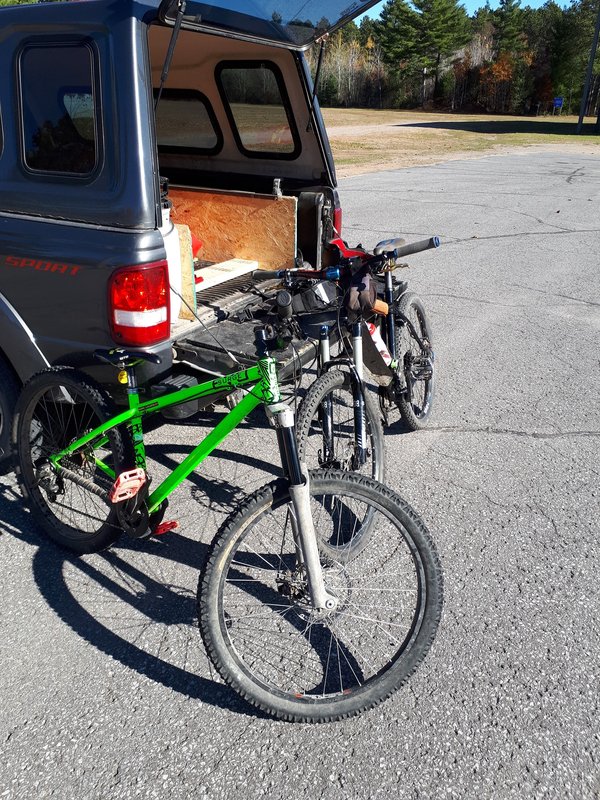 Meanwhile Joely took over the NS eccentric I had when got the Stylus. Had swapped saddles when she took it over. Hopefully now am doing better. This year will get to do some rides with her. 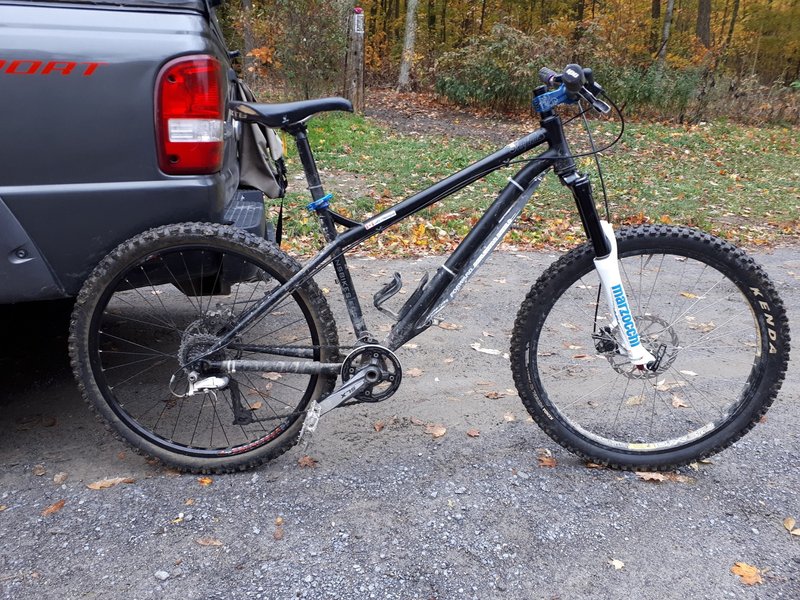 Yes, there is something to be said for weighting the front with 170mm of coil goodness to smooth out the ride.

After a mid ride survey I made up, all my injuries have stated that minimum 140-150 mm is best to avoid a negative reaction. LOL

Before the next snow fall. 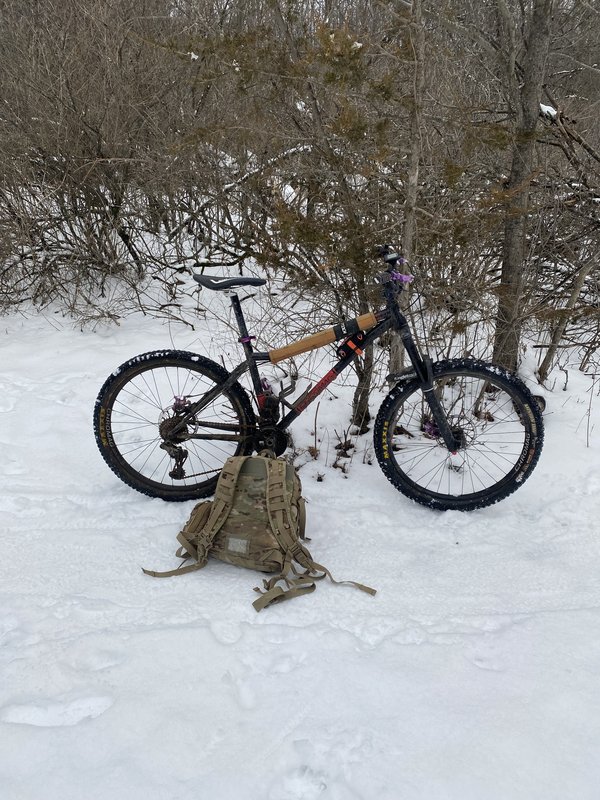 Day before me first ride on snow covered trails in 2023.