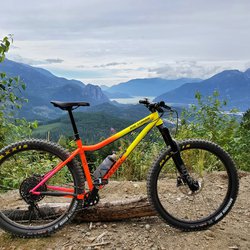 "The spiral retaining ring is used instead of a more common standard clip with an opening that's squeezed together. These are said to provide improved retention thanks to the 360 degrees of contact."

Fox had these 10+ years ago. On the same note, Fox's air bleed system and floating axles are straight out of Marzocchi forks from the turn of the millennium. Funny how old ideas keep getting re-hashed as new. Oh and yay more proprietary tools for no reason at all :D

It's funny how different welding styles can be. These are huge! They remind me a bit of the old American (ABM) frames from back in the day.

"E Bikes are shit motorbikes". I almost want that on a T-shirt. He has a point though. The power delivery is pretty terrible on any of the higher settings. I've seen people spin out and crash going uphill, and also fail to make tech climbs that I can get up on my hardtail with no issues. In 'Boost' type modes you are just hanging on and assisting the motor, rather than the other way around. I guess most people just want a self-uplift for MOAR LAPS so don't care about such things, but IMHO the technology needs a hell of a lot of refining.

"My pet peeve about pets is owners insisting their precious rides in the vehicle during shuttles. I do not want dog hair all over my ride nor my gear and the same goes for me sitting in their stinky hairy vehicles."

Awww diddums ;) Do you cover your Tacoma in a huge tarp when parked so it doesn't get dust on it?

It's  a no-brainer to buy the bike that is in the shop if one's current bike is knackered. Until 'Plan A' is on a boat it could be held up for months due to container shortages. If one's current bike is fine, then do whatever you want and just ride that one in the meantime. Re the deposit, what's the point of paying one if it can be returned? That makes no sense at all.

Riding a hardtail with a 77 degree seat tube angle, this has reminded me that I need to angle the nose of my saddle up a bit. I always have it flat, but moving the saddle so far forward, and having the front of the bike dropping a bit when on it means that I am constantly sliding forward on the saddle. The trend for really steep angles and horizontal brake levers insinuates that bikes are only for riding up super-steep climbs, and then down cliffs.

7 sp XT thumbshifters with the 'extra' click so you could still use them with 8 speed. Mounted upside down (so with the RH shifter under the LH brake lever) for better ergonomics, other than needing 10cm long thumbs to get into first gear ;)

I've got a bike on order with the 'standard' pawl system Deore MS freehub body. I'm hoping that it will be more reliable than the XT one that I've had previously that would make horrific grinding sounds. People 50 meters up the trail would look around wondering what the hell the sound was. It would go away with a full strip down and lubrication of the 'do not take apart / lubricate' bits but always come back again. Deore hubs seem to be another area where 'min-maxing' makes sense.

Does anyone know when tickets will be on sale for The Dumpsters Vs Trail Slayer handbag fight?

Pinkbike Day 1: Must See! Watch some fucktard blow up volunteer built berms in order to rep some shitty pants.

Pinkbike Day 2: Watch this video which explains the 10 things that you can do to keep trail builders happy.

Pinkbike Day 3: Must See! Watch some fucktard blow up volunteer built berms in order to rep some shitty pants.

Props to NSMB for having more integrity and interesting / innovative content. Especially the likes of Andrew Major's musings.

Another RMB 'ambassador' logged a ride on a trail that I had closed for major work and wanted the dirt to firm up. I'd marked the trail as 'closed' on TF but of course not everyone (including me) is going to look on TF before a ride. So I piled logs along the whole of the climb into the trail and across the entrance to the actual work. Looked like him and presumably his Bros lifted their bikes over the whole logged section and still dropped into my soft trail work when they could have at least ridden around it..... These company's need to stick a bomb under their riders and start promoting responsible riding before areas get closed down.

'We' have had 26/29 mullets in the past but failed due to them being for XC applications which might as well be 29/29 for most people. But for people who like to smash drops, land whips sideways and generally hoon around, there's some logic at least in just going all out BRC. Maybe the industry is pushing the wrong trends yet again ;)

I'd say geometry is the main positive change over the last few years. I'd much rather ride something like the Norco hardtail linked below over some 'Gucci' Santa Cruz from 2012 that someone will probably think is still worth $3000. You can really embrace the 'elbows out / weight low' riding position on the steep trails around here on a newer bike Vs hanging off the back of the bike like you are allergic to the front wheel. All you really need is a decent front tire and front brake and you are good to go!

At this time, all non-essential travel should be avoided. This includes travel into and out of B.C. and between regions of the province. "

Syncro posted this above from the Govt and I think it sums up the confusion. Everyone has their own idea of what a 'region' is! Especially 'influencer types' who have been travelling between Vedder and Pemby, Coast etc all winter without a care in the world. RideENNUF all congregated on Bowen recently which got plastered all over social media (which was deemed OK because it's in the same 'region'). If it's OK for them, it's OK for us....right? Loads of people from Vancouver travel to Squamish. Loads of people from Squamish travel to Pemberton. Everyone goes to the Sunshine Coast. And so it goes on.....

'NORBA' certainly wrecked bike geometry for a long time. My first mountain bike was in many respects garbage and in 1987 had 'outdated' geometry with long chainstays, short stem and riser bars yet I was able to ride that bike up a steep rooty climb that I could never make on any of my subsequent bikes. I guess someone decided that short stays meant good climbing, but without long top tubes, it meant having 150mm flat stems to keep the front wheel on the ground. Slow hand clap ha ha....

The local industry seems to operate inside a 'bro-bubble'. They do what people from Vancouver and the S2S think is 'cool', i.e. ripping up loamers and riding whatever new unsanctioned trail is the flavour of the day (and will be forgotten about tomorrow). When's the last time all these bro-pros filmed on Upper Oil Can, Grannies etc? They'd make great backdrops for selling pumps or whatever. It's really ironic that we have all this legendary terrain here, yet it's 'cool' to film trails that look like they could be outside Birmingham in the UK. Sick braaaah ;)

Credit to RaceFace and Wade Simmons for using sanctioned trail for their latest series.

Just keep checking on Pinkbike for the latest 'influencer' video. Twice so far this week we've pretty well seen directions to 'sick loamers' thanks to showing really obvious landmarks such as roads and water towers..... You'd think that in 2021 they'd finally smarten up?

Awesome cinematography but weird trail choice IMHO. Surely a bike like that should be filmed smashing Incline at high speed, not riding generic loamers? ;)