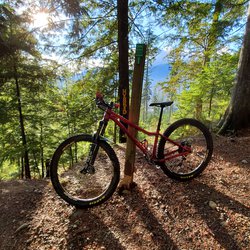 I got the steel version and it is so much fun to ride. Super sporty and capable. I tried the ti version. It's beautiful for sure, and you notice the weight difference when you pick it up, but no compelling reason to pay extra for it. I have never wished I had the ti version while riding the steel one.

The 157 spacing is a non issue. Just get the wheels that fit the bike. No problem sourcing them. It helps that my fully also runs 157, but honestly I have had to swap wheels exactly zero times.

Timely article Dave. I recently rode my Knolly Fugitive for the entire duration of the BC bike race. Obviously not the best tool for the job, but it is the bike I own. The wrong bike for 90% of the trails, but oh boy did it feel sweet passing people on the few properly steep sections. I did what I could to make it slightly more suitable, replacing tires, fork, and shock, but it still weighed 32 pounds.  Was I slow? Yes. Did I fully enjoy myself? Hell yes!

Nailed it right there. Using the Manufacturer's recommended product seems like the best practice.

Interesting discussion AM. I usually ride with the ball of my foot roughly over the axle, but sometimes move my feet forward on the downhills. I ride OneUp pedals exclusively and really like them. I am curious to see if I change my foot position during recovery from my broken ankle. I definitely use a more centered position pedalling with the cast on. The scariest thing about this is that I can't drop my ankle, and it feels very insecure.

Well put Mr Roggeman. I'm far too old to care what anyone thinks of me, and very aware that I have a limited time to keep doing the things that bring me joy. Doing these things under my own power is immensely satisfying.

I love riding my e-commuter, but have zero interest in a motorized mountain bike. I've been trying to understand why I have such divergent feelings towards them. One just makes so much sense to me and the other is an anathema. I too grew up riding dirt- and street -bikes, but gave both of them up once I started riding mountain bikes. I love everything about them, and have never once wondered if having a motor would enhance my experience.  It doesn't bother me if other people ride motorized bikes, but for me it feels like capitulation. The day may eventually come when I can no longer pedal,  but until then I intend to propel myself up the hill for as long as possible.

I have a Kuat NV 2.0. it's a very well -made rack that does a good job of carrying bikes. I run the 2 bike version on my small car.

I have to say though that my NS 4 rack is quicker and easier to load/unload. Not to say that the Kuat is difficult to use, but the NS feels more efficient, at least for non-E mountain bikes .

PNW posts and customer service are great. Their dropper posts and remotes work very well, last a long time, and are reasonably priced. PNW and OneUp are the only posts I will buy. Cartridge posts are cheaper/easier to buy and maintain, and perform just fine.

The latest crop of hide-away tools are clever and all, but for me the best solution is always going to be a multi-tool stored in the belt pocket of my backpack or fanny pack. It's cheaper, easier/faster to access, and there's a huge selection of multi-tools to choose from. I also carry the wolf tooth 8-bit pack pliers, but I don't love the small, fiddily bits.

I guess Noel changed his mind about 29ers. I'm very glad he did!

I just ordered one of these new lights from Dylan. I plan to run it on my helmet.  Will report back once I have tried it out.

I think that land acknowledgement statements are somewhat disingenuous. Many people will say they are living on unceded territory, but how many property owners are willing to give it back? I know I am not.

I'm definitely a 'function over form' guy. Performance is the most important criteria to me, followed by thoughtful design, robustness, ease of maintenance, and cost.  Appearance doesn't even factor in. Sure it's nice to have a bike you like the looks of, but if the bike makes me happy I couldn't care less what colour it is.  I'm partial to Knolly because they make bikes that really work well for me. I do like supporting a small local company, but if a different brand made bikes that suited me better I would definitely consider them. Boutique bikes are beautiful, but unless they perform better they aren't something I would consider buying. Mainstream bikes with budget builds are just fine with me  There is no such thing as a boring bike if it's putting a smile on my face!

OTOH watching the people give up mobility/capabilities and become more motor dependent is sad and as is the environmental impact of the switch to e-bikes from bicycles.

It would be interesting to know how stats skew in terms of replacing car trips with e-bikes versus bicycle trips with e-bikes. Certainly, I know a lot of the latter personally, but that also speaks to my bias so it may be I'm looking to those stories.

My positive micro-campaign with family, friends, or neighbours who ask me about buying a blender is always to look at their plans for it. 90% of the time looking at their goals they'd be fully capable either right away, or with a little bit of training, of doing their planned riding under their own steam.

The advantages of making that choice are epic. A significantly better bicycle for less money upfront and long-term. With proper care, it can last forever. Nothing to charge. Significantly less to go wrong. Sense of personal accomplishment. Building fitness while traveling places that can then positively impact everything you do.

For folks riding to work, like my wife, the net time savings actually aren't that great either, even ignoring faffing with the charging setup and making up the lost exercise time (shorter ride / less effort). The e-bike doesn't cut down on time packing, changing, showering, etc. A commuter e-bike would shave an average of 30-minutes a day total, which is currently spent getting exercise.

Which goes back to my last post. Better to be selling what's rad about cycling instead of what sucks about battery-powered-everything.

On my ebike trips I save approximately 25% of my actual travel time, plus less time showering and changing since I usually don't break a sweat. This works out to approximately 40 minutes savings total on my daily commute. The lack of exercise is a problem though. I limit myself to 1-2 days per week on the ebike and the rest on the pedal bike. The ebike is pretty low barrier, so I often ride it instead of drive if the weather is iffy or I'm not feeling 100%. I'm pretty happy to have the ebike right now while my leg is in a cast. Without it I wouldn't be riding at all.

I bought a pile of the sintered disco pads for my zee brakes. They don't have quite as much stopping power as the OEM Shimano metallic pads, but they are fine on the back. Apparently disco have a different compound that has more grab, but I haven't tried them.

I finally got motivated to bust out the FS rig! Not a reason I wanted, but my toe lost a fight with a kitchen cabinet and once it's broken less badly I figure it would be nice to give it a stiff shoe and a cushy bike to ease back into shredding! ;-)

Sorry to hear that Vik. I'm riding my e-commuter with a cast on at the moment. Do what you gotta do....

I carry road bikes on my NS rack all the time. Face them backwards and use 2 sets of hooks per bike and it works fine.

Both of my friends with fancy Titanium hardtails had mystery creaks that were super challenging to track down. In both cases it turned out to be the headset cups. Not sure if it was lack of grease during assembly or if it's a titanium thing.

For sure, but there's another user group at the other end of the spectrum. The people I see buying modern HTs are all very experienced riders looking for a bike that offers a different riding experience to compliment their full-sus rigs.

"I do agree that hardtails are mainly for weirdos - seems to be the common thread and I include myself under that banner."