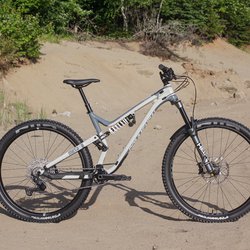 Oh I see! The Rancilio Silvia is a nice machine! The Flair has become my only espresso machine at home since the old Breville died, and what I am missing the most is the steam wand. I have ordered a Subminimal Nanofoamer to see what it can do, but it's not going to replace a good old steam wand. For the office or travel it's either an Aeropress or my small Vev Vigano stovetop depending on how I feel, and I'm always up for a truck stop coffee if that's all there is haha!

It's funny how mtb people end up with many similar interests. Now I just got a sewing machine to try to fix, customize and upgrade my gear, I don't know if that will become a shared interest with many others ; ) Cheers!

I can also vouch for the Feedback stands. I have a black one that I bought at MEC 10 years ago, I fold it and store it in a corner when I don't use it and it's always been solid and stable. I'm guessing it will last at least another 10 years and it's good to know that they carry replacement parts.

I am a totally manual coffee guy now and it's nice to work out a bit while making coffee without noise! I bought a 1Z Presso JX Pro grinder and it's also awesomely well machined and runs soo smooth. I'd be curious to try a Comandante to compare as they seem more well known.

Pete, if you have the chance, try a Flair manual espresso maker. I got the Pro 2 (with all metal/stainless construction and pressure gauge) and the shots I'm getting from it surpasses my old electric Breville by quite a long shot. Plus, it's silent and there is nothing to break on it.

All good gift ideas and I bet most people would be delighted to receive them!

Congrats! This is an awesome bike/project. Everything looks like it was researched and thought in depth, and every detail seems refined. I wouldn't have thought it was a first version if I didn't know, it looks dialed. I'd love to try the bike, now you just need to visit our trails in Quebec : ) Cheers!

When I used to build trails for a living, we mainly used the 70H (amongst McLeods, pulaskis, rakes and excavators!), and after I stopped doing that (my back couldn't do it anymore), I bought myself a 70H. Perfect for bench cuts, and just the right size for everything. I once basically built a whole trail with only that, a rake and some snips.

@Hawkinsdad Next time hit up Sentiers Boreals in Québec, it will probably end up much cheaper!

Edit: their tool site seems in maintenance for now, but the 80RH was 76$cdn when I checked last May.

Do you remember where you bought the Hex-plus bit set by itself ? I haven't found it anywhere in my last round of research! Cheers!

Also seconding the Accugauge and Wera hex key sets! I have few presta and schrader Accugauges and they're great.

For cheaper Wera fans (like me), the black hex set is jthe same quality and range as the more expensive color-coded ones, but I've got 2 sets for 14$/set at BC Fasteners. For those who like to keep their toolboxwars case foam free from grease, they're also easier to clean than those with the plastic sleeves, but probably a lot less fun to give/receive as a gift!

Most people won't care, but details like that keep my wallet safe!

The bike is gorgeous and looks like the geo is dialed though.

Well, no wonder you had better airflow and no fogging after you removed the Sweat Glide... you also cut your facial hair at the same time!! The suspicious looks you had with the mustache also morphed into an almost-smile afterwards, so it's hard to say which removal had the most effect on the other. My 0.02$!! ;)

Thanks for the great read Mike. I'm glad to see that I'm not the only one with that life/fitness cycle! A few years ago, for  few consecutive years, I had one stupid crash at every beginning of season, putting my riding on hold for 1-2 months. Also losing wage each year because of said accidents, after 20 years of riding and passion for bikes, I decided it was enough and sold my bikes except for my commuter. (Funnily, just as I started working in a bike shop as a mechanic for a few months).

Then I started riding again 2 years later and it was like I was starting over anew and I really enjoyed it. That first year I had a few stupid crashes, then the next one another one... those traumatized me a bit and I'm still trying to overcome not thinking about crashing anywhere.

I don't why I wrote this, but anyway, what I wanted to get to is that in your writing, I found a new vision or approach to riding. I realize that I am often influenced by my riding friends and their way to see riding bikes.

Some just go for the epic rides that leave me completely empty halfway (cool sometimes), some ride the gnarliest trails at full speed (used to be me, not that much anymore), some are chill and just talk the whole ride (cool sometimes). If I rode more with one of those, I would get in that mindset and mold myself to that way of riding for the whole season. Then I'd try to progress as a rider to get better in that particular discipline/approach.

Earlier this year, (I'll be paraphrasing here), you said that if one doesn't feel like riding, then so be it and don't force things. Well I listened and only rode twice this year so far haha! As summer passes by, I'm starting to feel like riding again now, and I'm glad to have found a new inspirational riding attitude : the Ferrentino way, which in my head means : it's okay if it's not always perfect, just follow your guts. Correct me if I'm wrong, but this feels more human and it is exactly the kind of inspiration that I needed to "begin" this riding season. Thanks Mike!

I'm riding the D2 and nothing ever turns out of place, but it seems to be the same problem that others have had with the OTT adjuster winding itself out.

Nice picture @Vickb! Makes me want to go ride in the snow too, but it was super warm here out East this weekend so no snow yet this season. Maybe next week!

I've been back on a carbon bar in 31.8 and it is really good. I only mentioned 35 because that's what a lot of people have.

I've read or heard an interview with an industry guy a few years ago who said that they went with 35mm mainly for aesthetic reasons. I bought a 35mm stem on my last build to feel the difference and sold my previous bike with the 31.8 so I'd like to stay with what I currently have even if it's harder to find a bar I'd like.

My favorite bar ever was an old steel Bontrager Crowbar (25.4), that I had bought at the time because it was the widest available (like 2004-2005).

I've been running 9* backsweep Deity and E Thirteen bars for the last 4 years and I've been looking for a 35mm bar with more backsweep (between 12 and 16). Since it's against SQ Labs' principles to make 35mm bars, any of you know any alternatives in that diameter for rougher trails? I'd also add my name to the Chromag more-backsweep bar group! (But in 35mm)

So far this year I haven't even taken out my Meta AM once and I've been only riding  my '09 RM Reaper 1 that I bought on kijiji as a loaner bike for 100$ 4-5 years ago. I've rebuilt and changed most parts, but it still has the original RS Dart fork, stock narrow wheels and cheap cable disc brakes.

Most people I meet in the trails only look at my bike and I can see the judgement in their eyes. I guess It would be different if I was riding a Chromag, but I don't care and  I'm having just as much fun as when I'm riding my tricked out full suspension bike. (My back does not agree but it's just temporary.)

Maybe it is location dependant, but riding an old hardtail is a good test for ego and/or a nice sociology experiment around here. Whenever I see someone riding and old bike or a rigid bike (hasn't happened to me since the late 90s here on the East Coast), I'm thinking they're like me and they like to vary their riding experience, or that's what they were able to afford and it's nice that they're giving the sport a go without needing a 3-4K bike.

Unfortunately, people are so influenced by marketing, sales people and looks these days. Everyone would benefit from more open-mindness.

To precisely measure angles, I take a side shot of my bike using my DSLR with a fixed-focal lens. The trick is to be level, centered and squared with the bike as much as possible, use a lens that doesn't have too much distortion, and not shoot it from too close to limit distortion, once again. Then I upload the picture in Camera Raw/Photohop and compare various dimensions with the longest that I am able to measure "in real life" (like wheelbase or tire diameter) to limit variances. For angles, I just convert the image to a layer, level both axles with a line, then I rotate the layer until I get the measure that I'm looking for. To measure reach, just use vertical lines and measure. Since you can zoom in as much as you like to mark the start-end points, the measures are pretty precise.

For my bike, the wheelbase, ETT and reach numbers were spot-on, but the head angle was 0,1degree slacker than what the company stated. This method is also useful to measure the "effective" seat tube angle relative to your saddle's position on the rails. I put mine quite a bit forward and I can precisely measure how steeper the number really is, which is useful to get for future reference.

That's pretty nerdy, but I like those things haha!

My last two bikes were bought sight unseen and the size chosen by the geo chart. Reach mattered a bit to me, but the most important thing for me was also the effective top tube.

The Rift Zone's pedaling position felt a bit long even if the reach was shorter, and the Commencal fits perfect. I don't get why people choose only with reach, but to each their own!

One way is to have small children. Once your ride frequency is reduced by 90% everything lasts way longer. :-D

I'm doing it the Kenny way too! Did not even take my full-suspension bike out yet this year so my bearings are still fresh as!

I second the Nicolai / Geometron suggestion. I'm tired to buy and deal with misaligned frames, the next one I'm getting will be made by those guys. Plus no paint on the frame means one less thing to worry about for me 😅