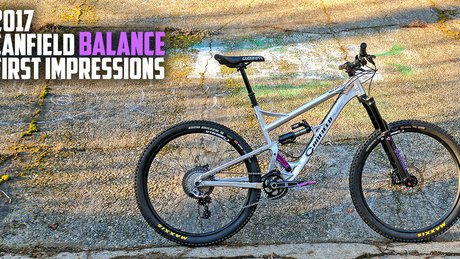 It's made of aluminum, it doesn't have wagon wheels, it's got lots of travel - this will definitely make bikes great again...

“29er wheels can be prone to feeling a touch floppy with their longer spokes, so the stiff rim and high spoke tension counteract that….”

"In use it made the fork dive hard into its travel, particularly on steep sections of trail when on the brakes..."

The idea is that an oval ring can make the most of the stroke where power is produced by giving you a slightly higher gear, and minimize resistance where it isn't by lowering your gear...

When Shimano finally released their one solution in XTR form, there was mass derision from the internet hoards...

"the  beautiful anodized finish made this retro grouch teary-eyed reminiscing about the 90s..."

Sweden isn’t just about Ikea and meatballs, Thule also hails from there. Does their T2 hitch rack pass NSMB muster?

Can elbow and leg armour be comfortable for the entire ride and still protect when you want to get rad..?

"When I was a condo dweller, the quest to find a suitable hose to clean my bike drove me nuts..."

“…keep the digits from getting numb while at the same time not making it seem like you have just stuffed your hand into a bag of cotton wool.”

“…I am guessing that the banana was appreciative of the yellow hue of my new bone dome.”

Sure they are pretty, and loud, but can they handle some abuse?