lol. I've always pronounced Sproatt such that it rhymes with "throat", but someone declared "local-longer-than-you" privilege and said I was doing it wrong. :/

I always say sprout. No one has called me out yet and most people understand. 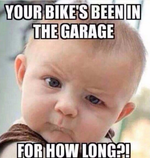 Sproat is an old English name pronounced like "sprout". Maybe Sproatt is a variation of that name?

Sproatt, rhymes with boat. I don't see a u in there. Sproat Lake on Vancouver island is pronounced the same way. Now if the mountain is named after a person that pronounces the name as Sprout, perhaps we should rethink that.

Then you got your renamed places. Whistler mountain used to be London mountain. And River of Golden Dreams (barf) should be renamed River of Drunken Louts. Or River of Get The Fuck Out of my Town.

We finally hit up LOTS on Sunday which was pretty much perfect timing weather wise. The rain on Saturday tamped down pretty much the entire trail except a few dusty corners toward the bottom. The temperature was perfect for climbing as was the fresh air, and we even got a bit of sun in the alpine.

Hats off to everyone involved (as highlighted in an earlier post by flip). Definitely one of my all time favourite rides and I cannot wait to do it again. The climb wasn't anywhere near as bad as I was expecting, although I did wish for a 30t chain ring a few pitches and had to jump off and push. We started from Stonebridge so that saved some energy. The entire Into the Mystic to the top of On the Rocks is really well graded, lots of opportunities to recover. On the Rocks was the highlight for me, just amazing views around every single turn and fun terrain. I was impressed to see only minimal evidence of folks going off trail as well, hope people continue to respect the alpine.

LOTS descent is just endless fun. I loved the middle section with up and down the rock rolls and all the fun single track as the forest gradually grows more dense the further you get. Definitely getting worn in and sucks to see people smashing in alternative lines so soon. My buddy is a solid intermediate (this is his first summer on an mtb, he's a roadie) and he handled the descent fine with only a few corners walked and of course he smashed the climb no problem.

I'm a mid 30's office drone in mediocre shape and it took 3h45m moving time from Stonebridge to Stonebridge with lots of waiting on the descent for my friend to catch up. I think I could cut about 30 min off next time.

I did the Rainbow End and LOTR in the same weekend. They maybe both alpine trails but they are way different. Rainbows End is more technical. Some tech at the top but most of it comes once you hit the treeline. Very steep sections with tight corners and tight trees. Was awesome, but a totally different experience to LOTR which was way mellower.

I did the drop on Rainbow this year. The route down from the Alpine has a couple parts and is pretty mellow, but as noted above when you get to the tree line is where the fun starts. It's black technical chutes that go on for quite a while. Super fun if you like and can handle that kind of stuff.

I have. Didn't really enjoy and probs wouldn't bother again unless someone promised to carry some beers for me

Straight up the descent. It was about 5 years ago so no idea on the time sorry. I remember it definitely got steep, annoying and im generally all for suffering, but i thought never again when doing.