The two pieces behind the saw were one piece and I ripped it freehand using a 2x4 laid loose on top as a guide. That single piece had originally been cut from that log using a beam machine - you can see it a few posts above.  That long piece on the right of the pic is 5"x5" and is about 20ft long, I cut that using the beam machine and the big saw too.

When I need to mill beams I bring in my screw gun to screw the 2x4's to the log. I lay it out using a chalk line and use a 6ft level to keep the 2x4's straight as I screw them down. Those 2x4's have been sitting out there for a few years and they're mostly straight still, the level just helps to make sure they're straight. The level is nice to have if you're setting posts as well. I use 4" screws to make sure they get good bite into the log and I run the 2x4 about 2ft past the end of the log to make sure the cut is square the whole length. Next time I go I'll make a vid.

The cool thing about the beam machine is that it's cheap and easy to use and you end up with pretty straight cuts. They're also super easy to pack. I don't mind cutting freehand, it just takes more time and concentration. Some people complain that the beam machine doesn't sit tight enough on the 2x4 so they wobble a little bit, but they're not really meant for precision milling. I like the looser fit as it slides along the 2x4 pretty easily. If you wanted a tighter fit a few wraps of electrical tape around the sides would help tighten things up.

Below is a vid that shows what it is and the next vid right after shows it in action. You can get them on Amazon for $70 and something similar in the link below for $36. I paid $40 for the original one from Quadra Tools a bunch of years back but it looks like they're no longer in business. The price of Alaskan mills have come down so much tho that most people that have a good saw would probably just go that route.

Instead of using large nails to tie structure supports together and wanting something less expensive than bolts I've switched to using ready rod.
It works great and there's no waste in terms of bolt length. 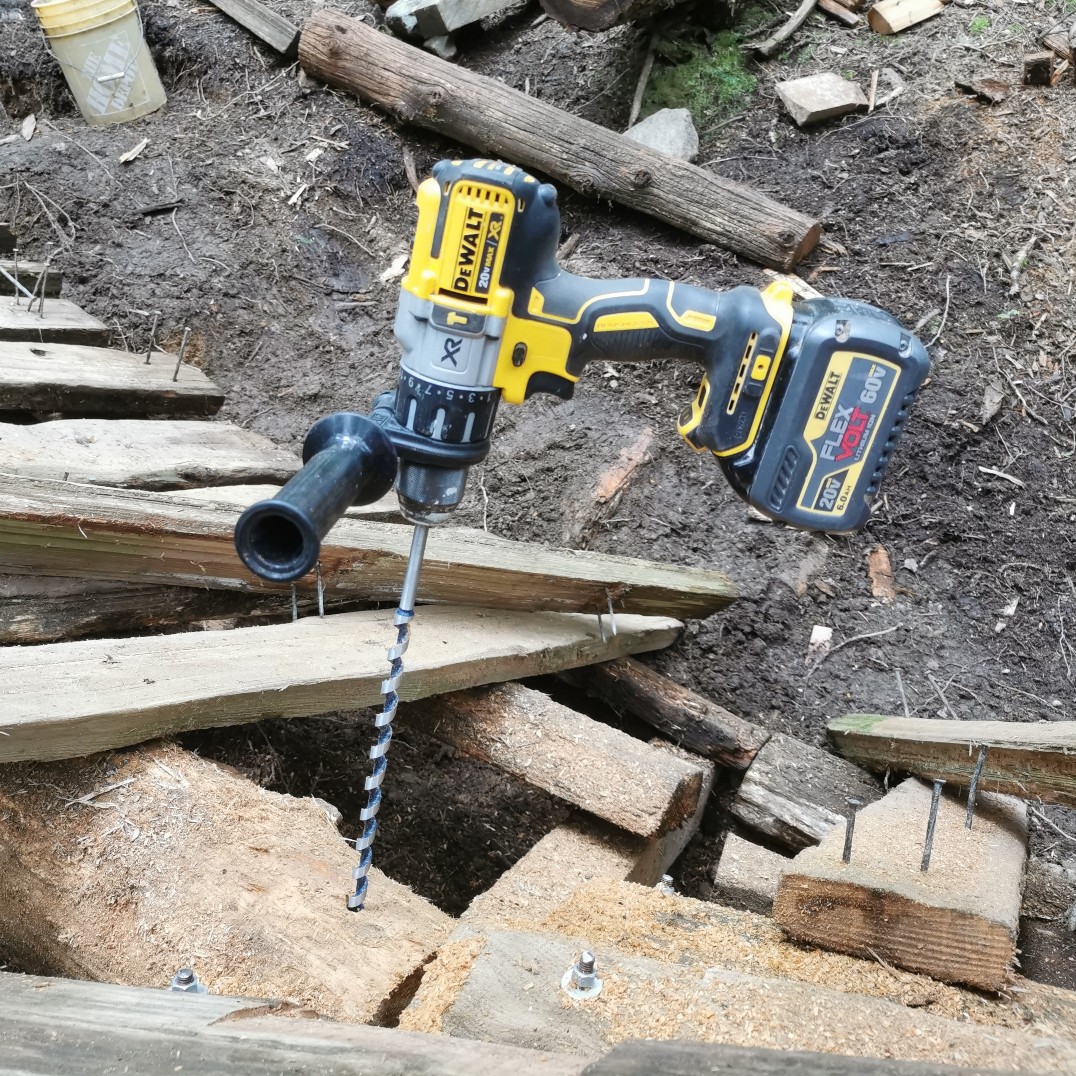 Worst part of trail building is digging out stumps 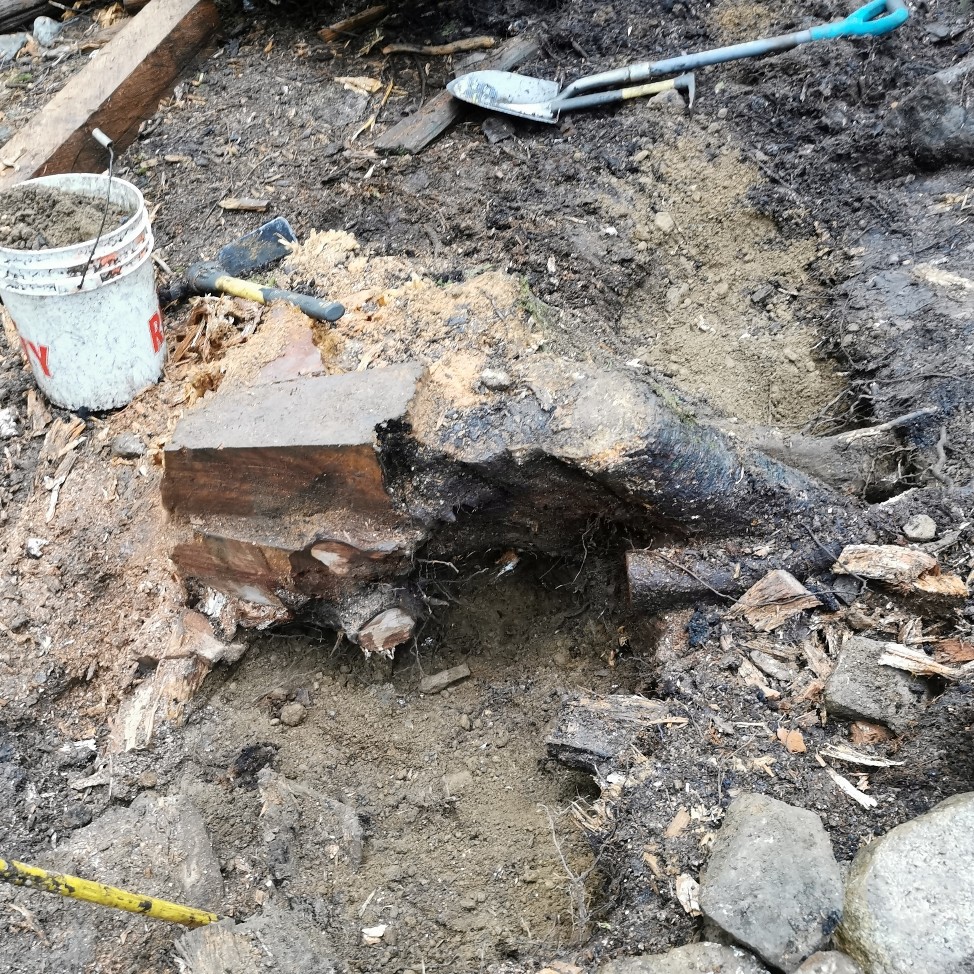 I think next time I need to remove a stump I'm just going to use a stick of dynamite. Same result and way easier. 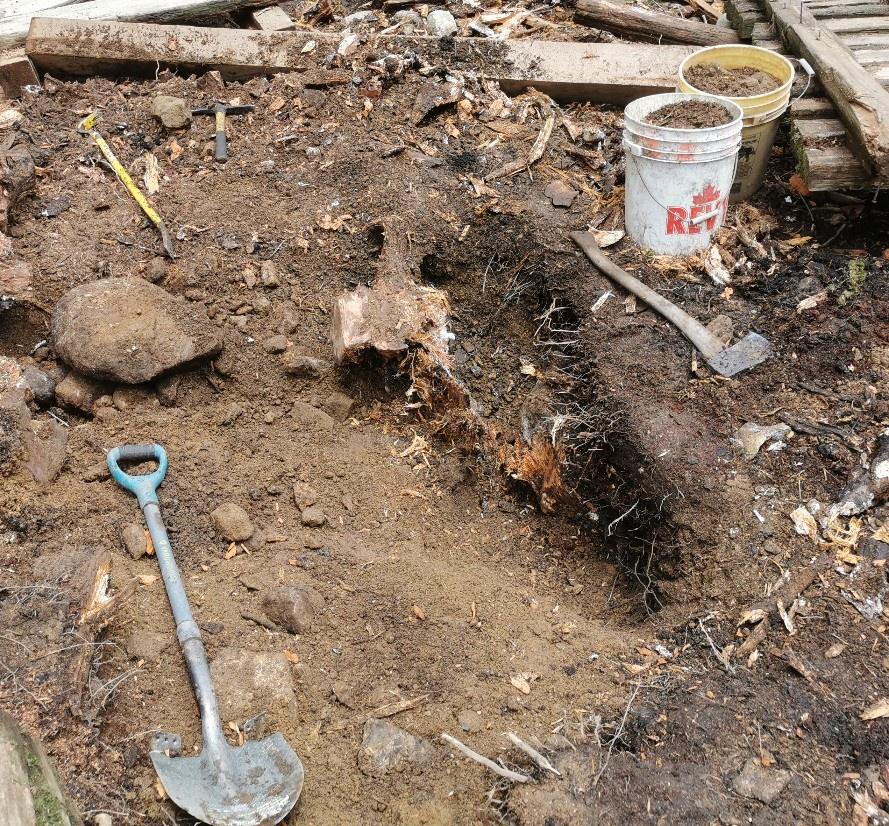 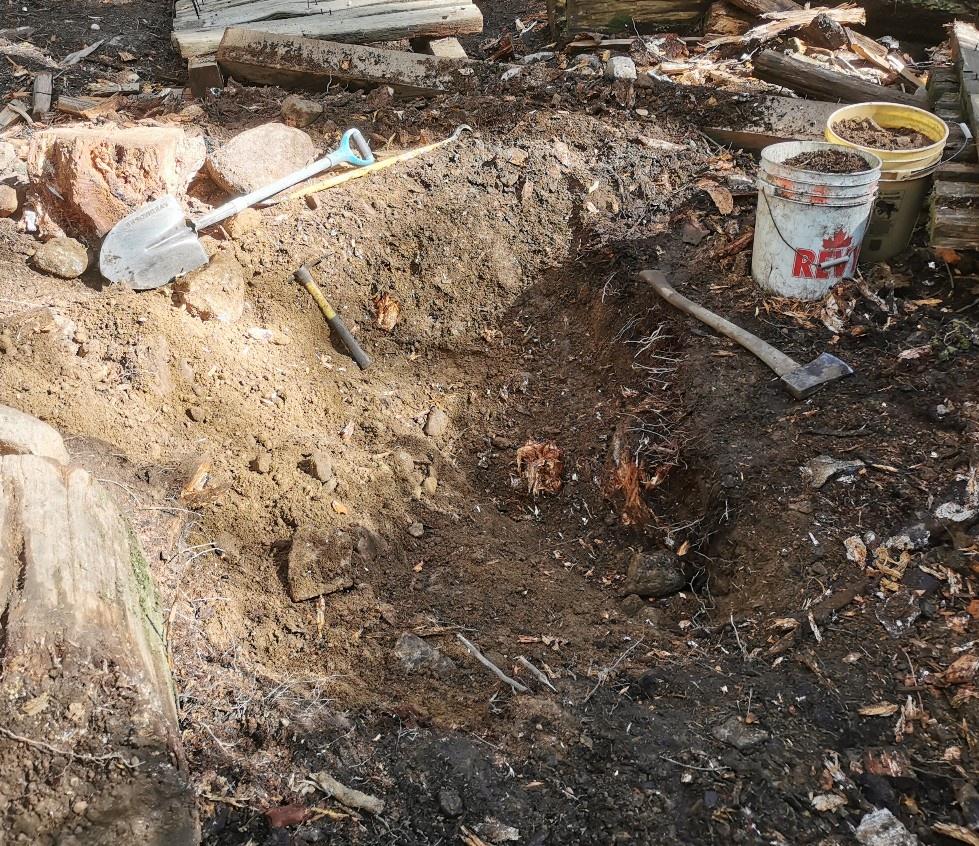 Rocking in a bridge entrance. 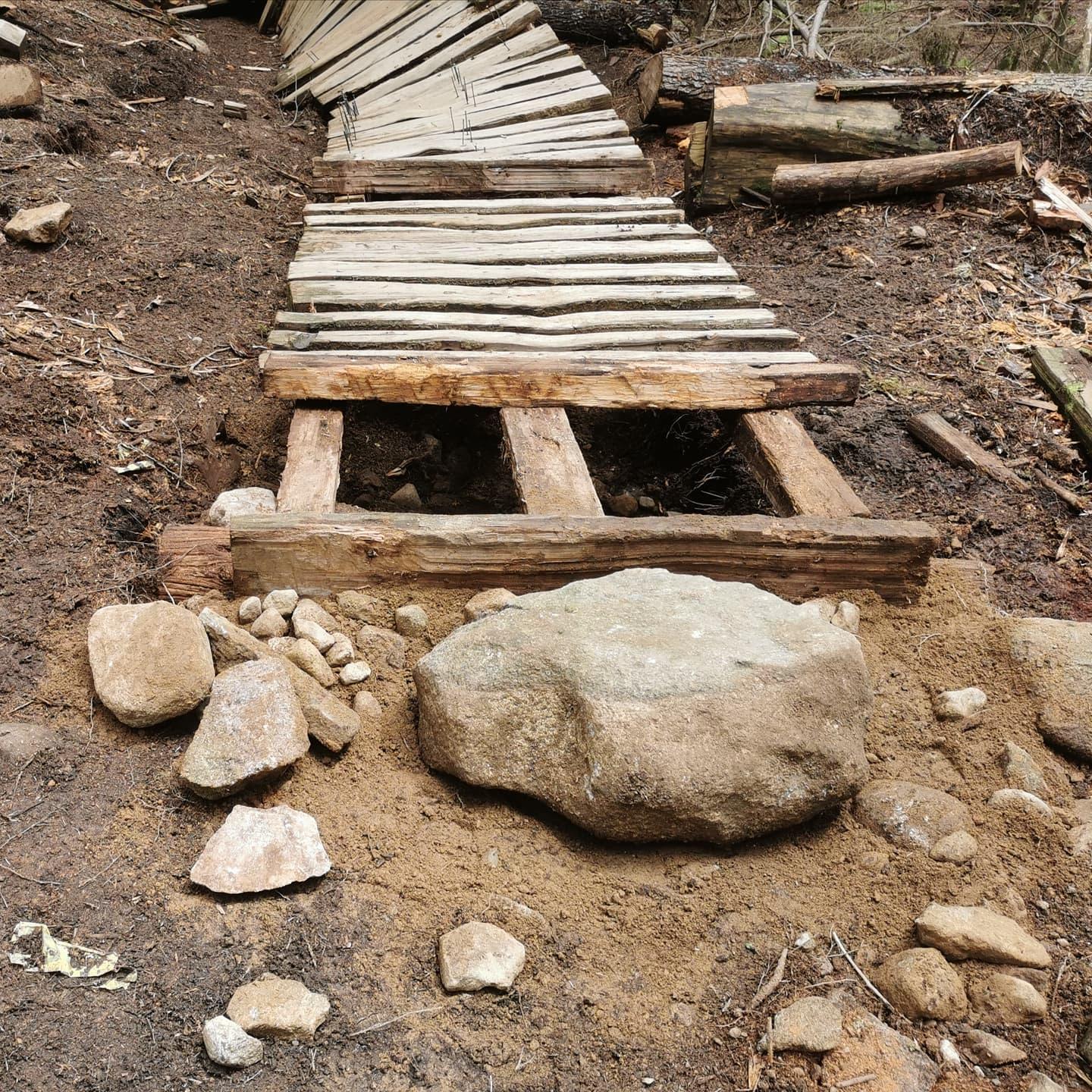 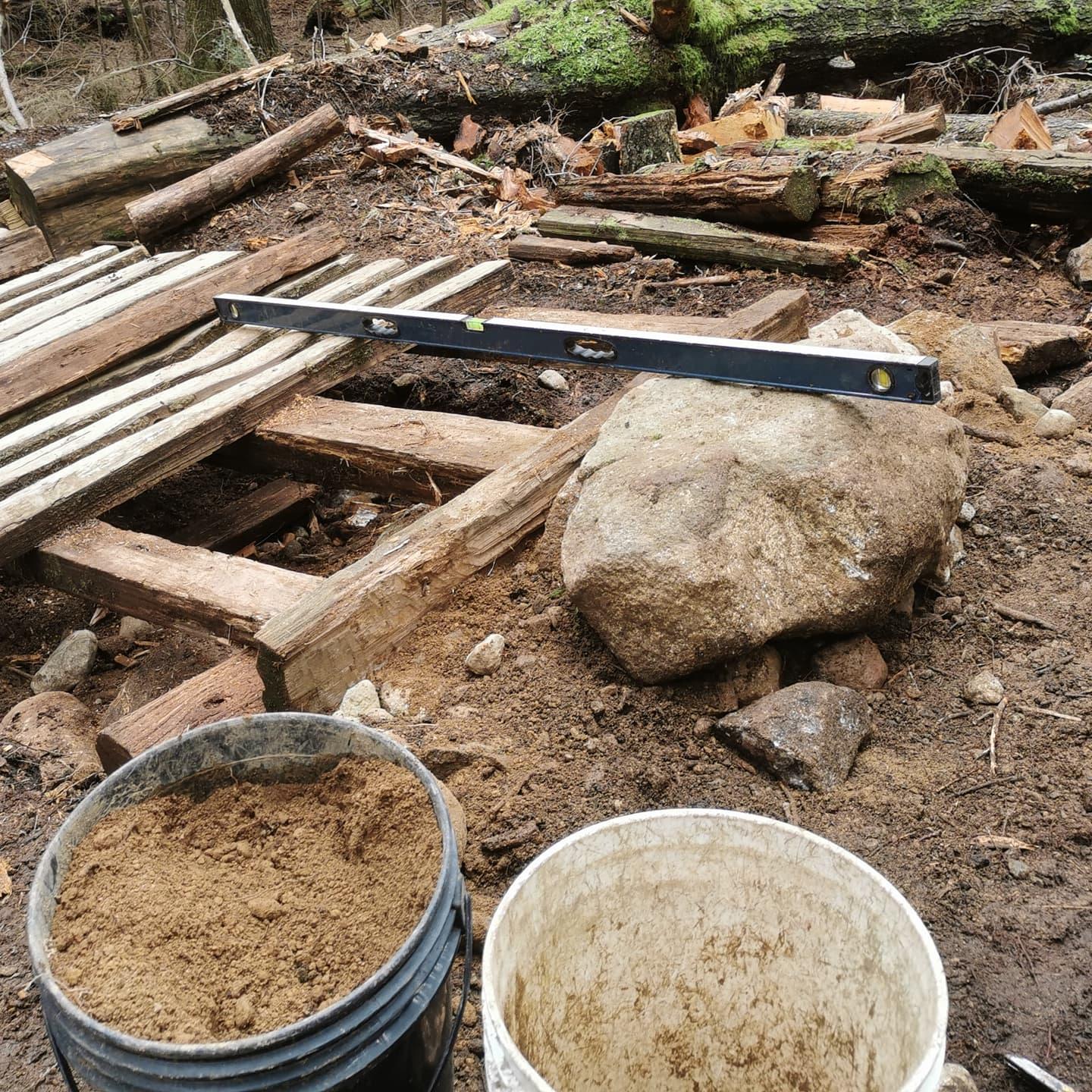 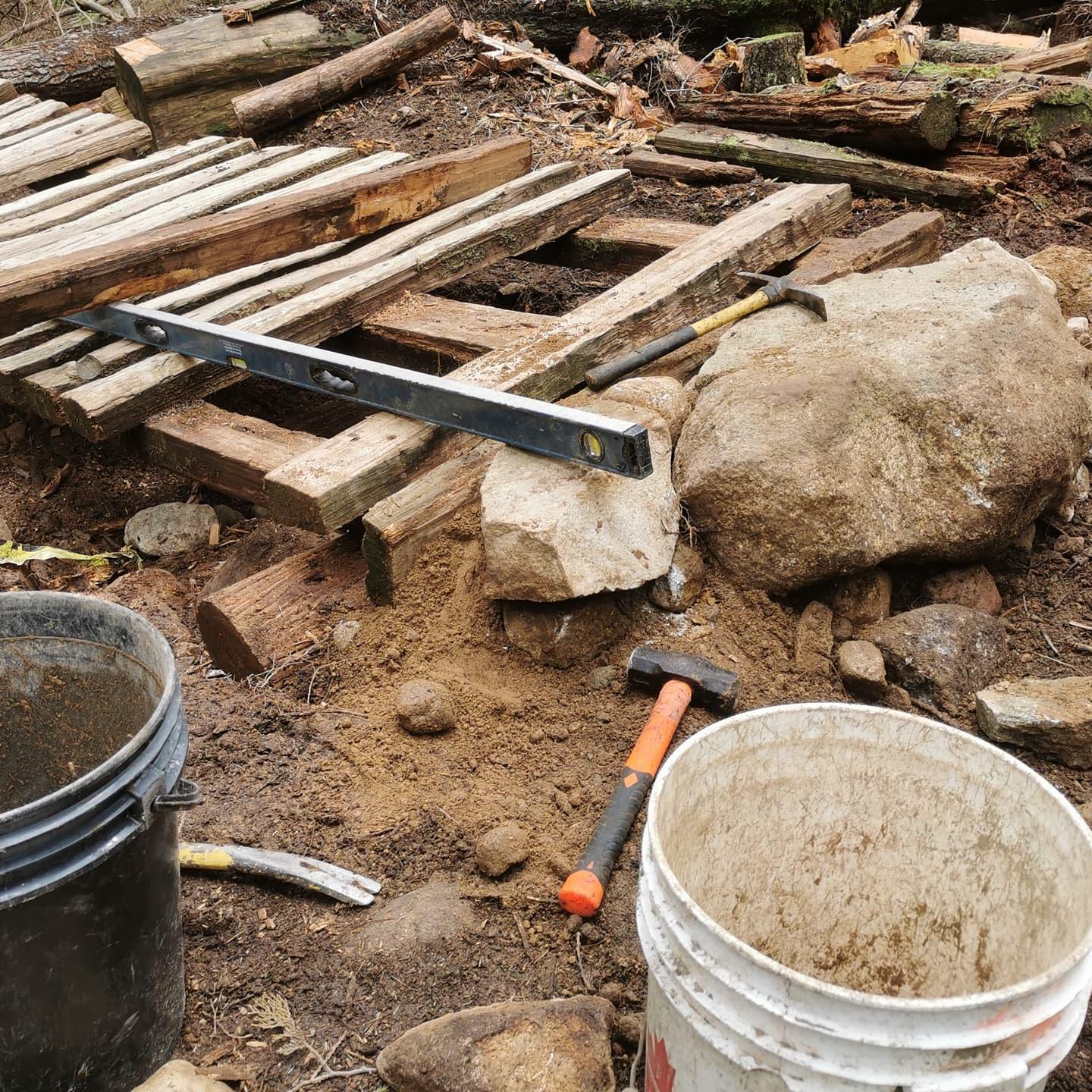 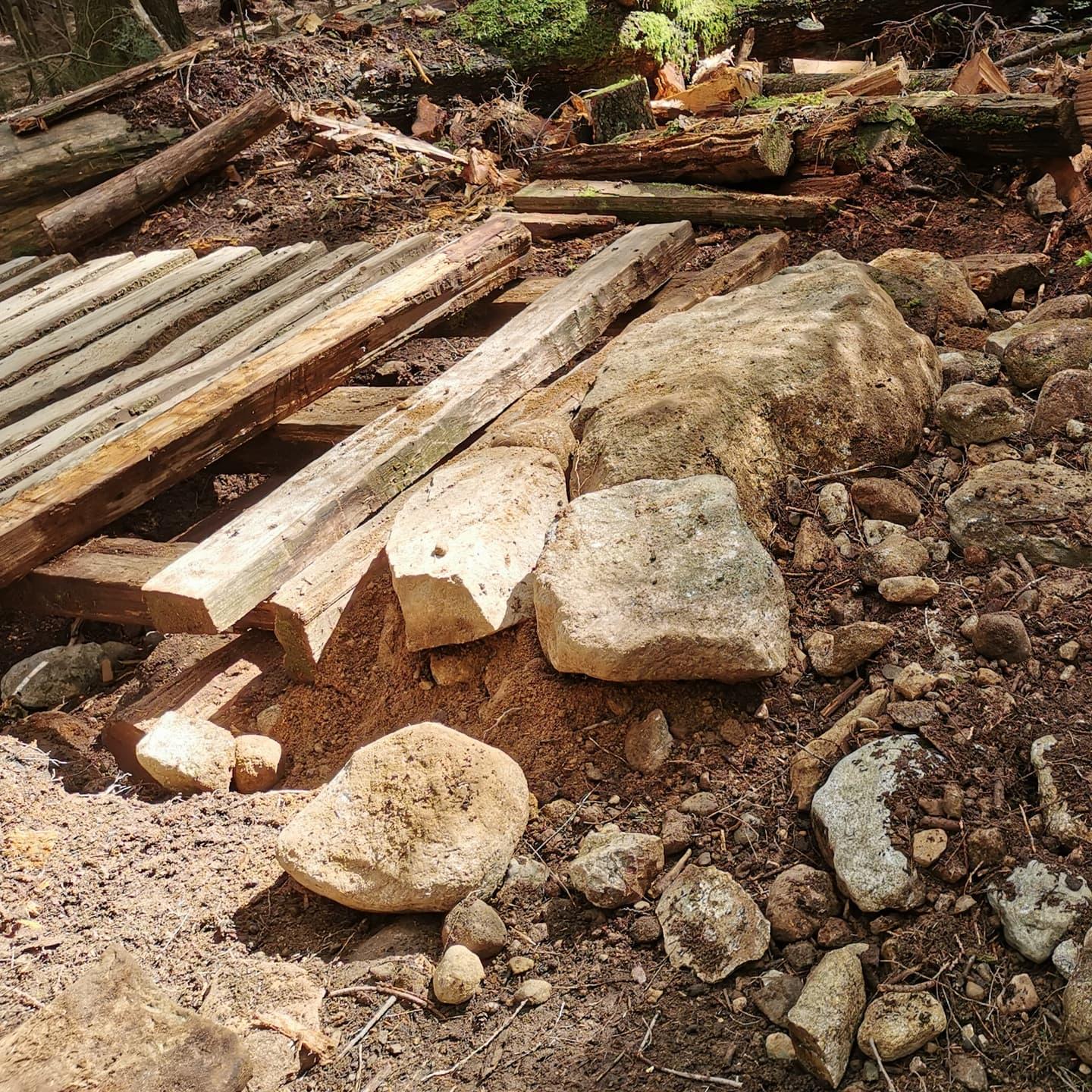 Sometimes getting rungs to sit flat on stringers/supports can be a pita and in the past I just used a hatchet to knock down the high spots. Now it's power tools to the rescue...

works like a hot damn for knocking down high spots so that rungs sit flush with stringers.

So the teeter is gone and this is in it's place. Not as exciting but still not a cake walk either 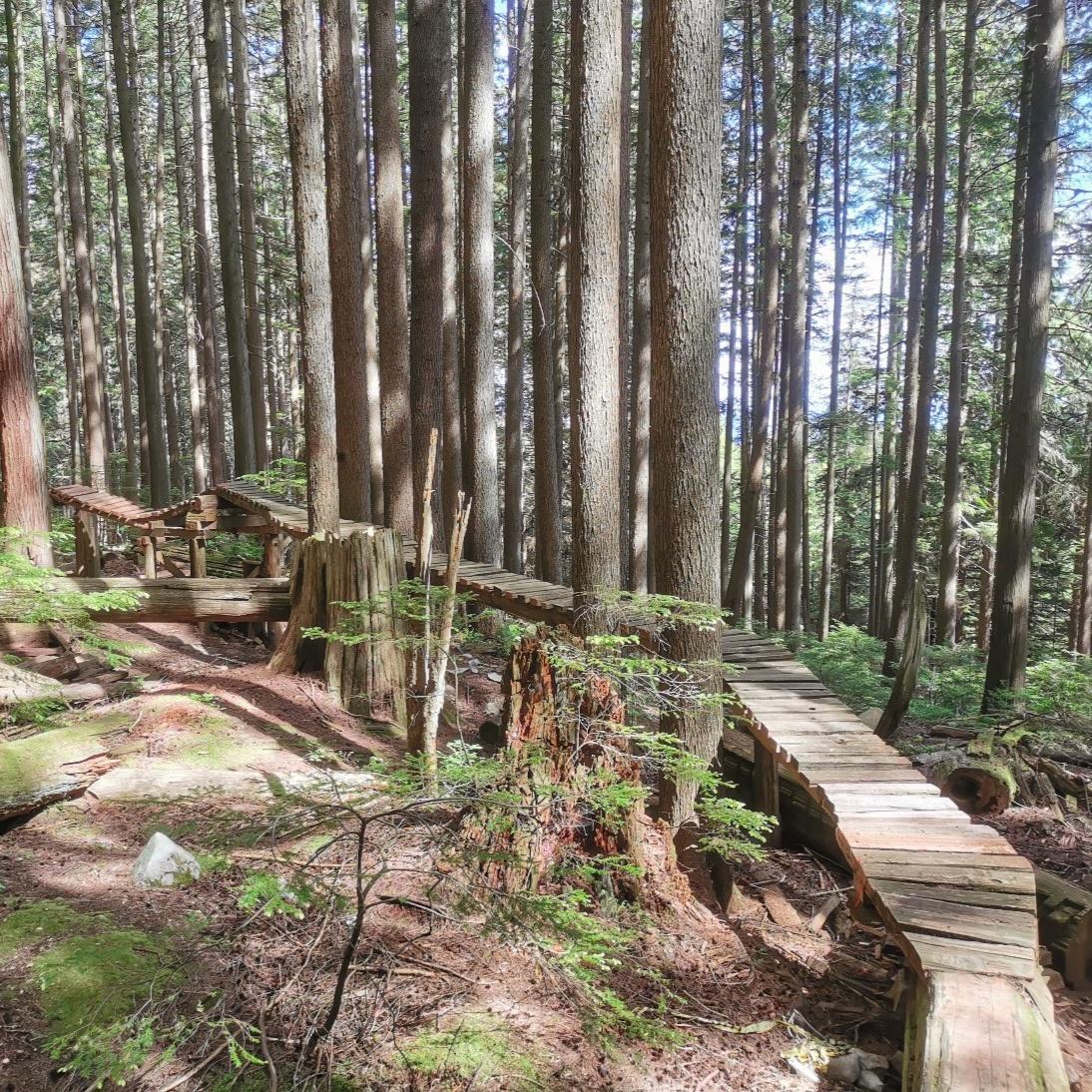 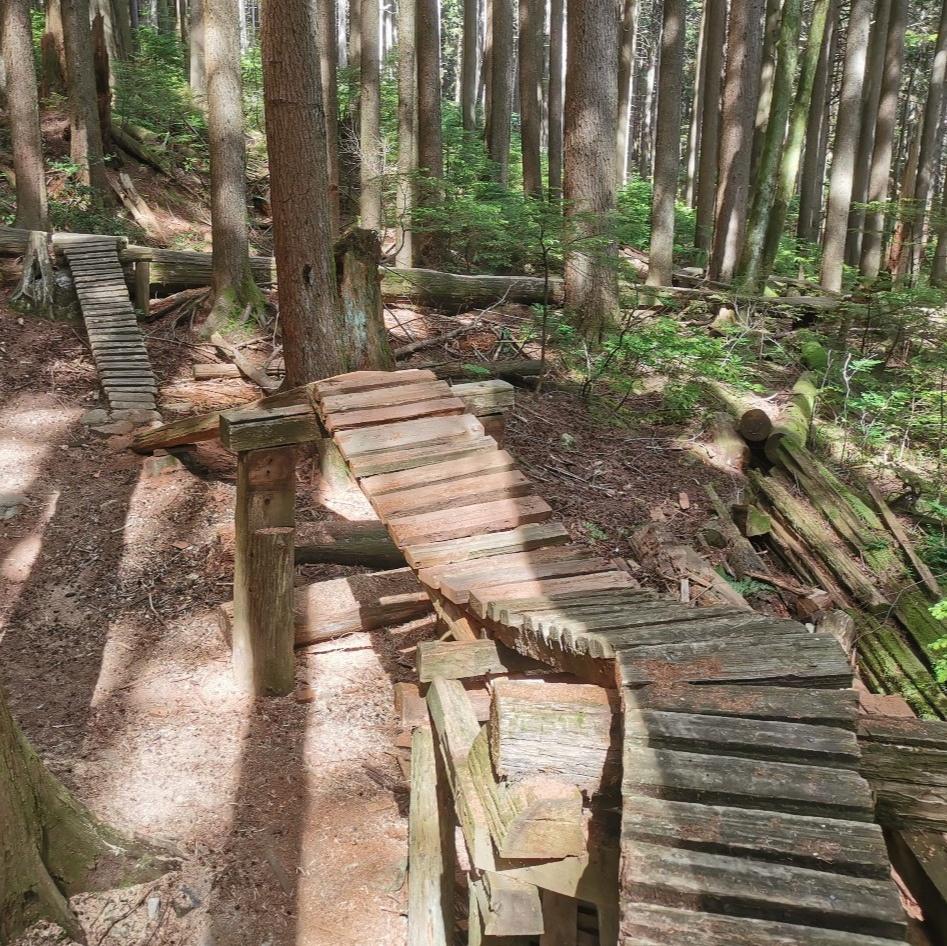 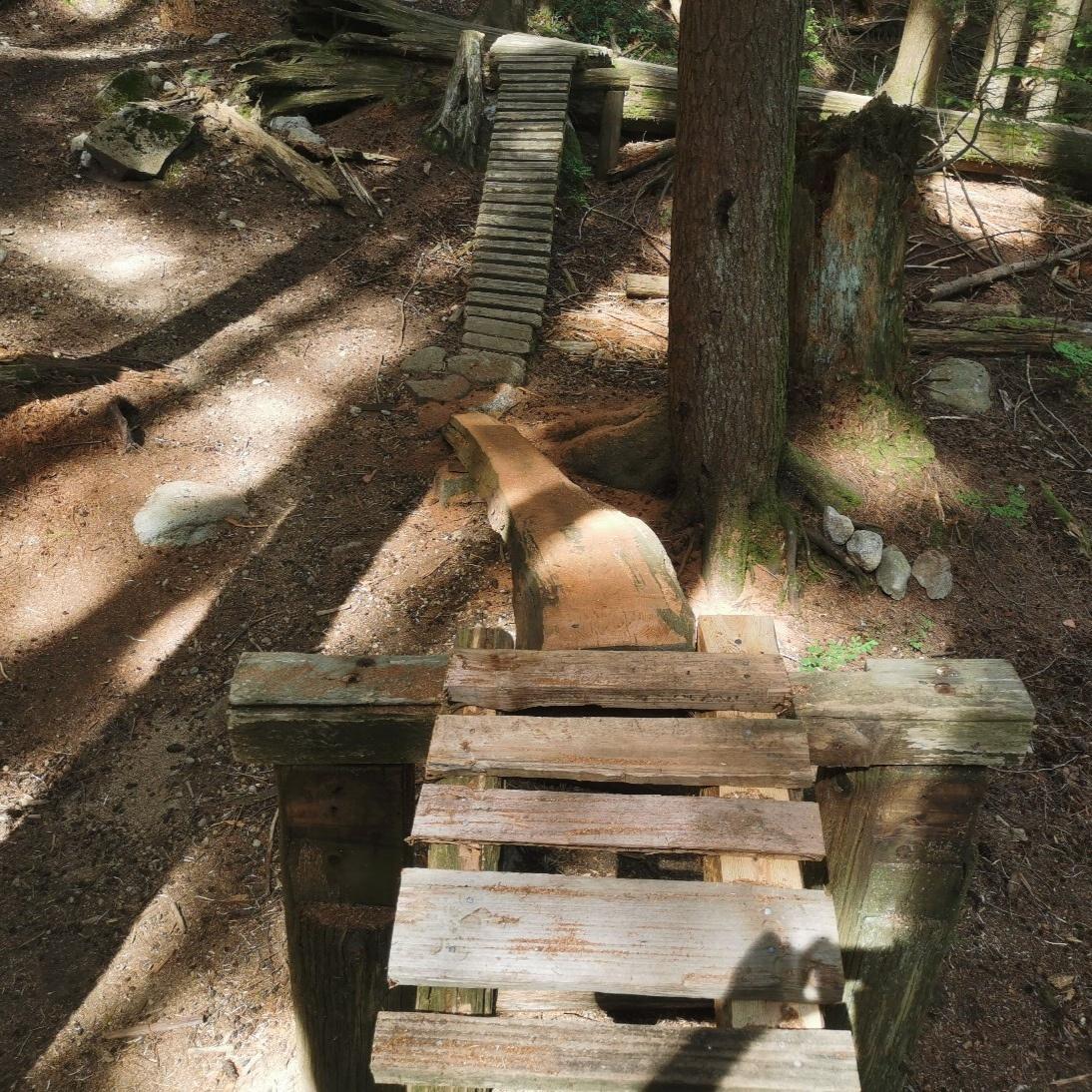 I understand the removal of the teater, anything that moves requires 10 times the maintenance.

Looking at the picture of the skinny, I think it is probably more difficult than the teater, not a complaint, just an observation.

That said, awesome to see some sweet woodwork.

I'm bummed the teeter is gone but this is definitely still in the spirit of the trail IMO.

Took the new trail toy out for some testing last night - works great. I'm almost thinking it could be worth in buying another and taking the light head off to use as a light for night riding. 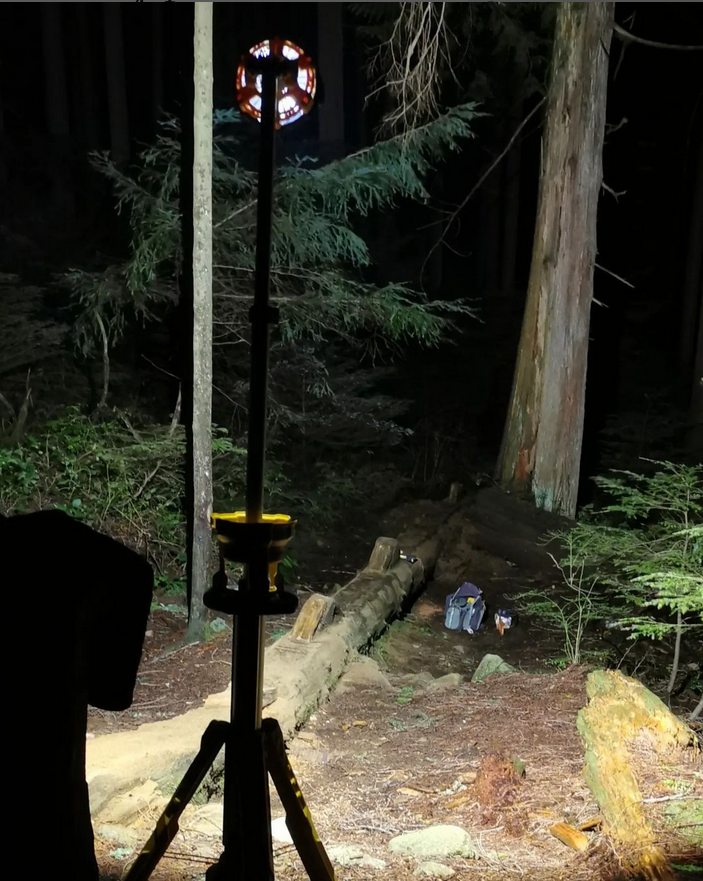 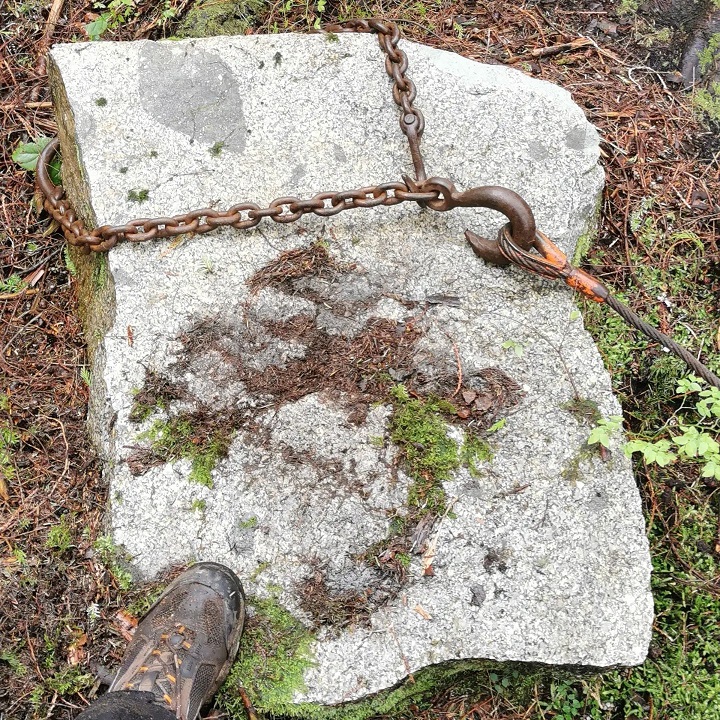 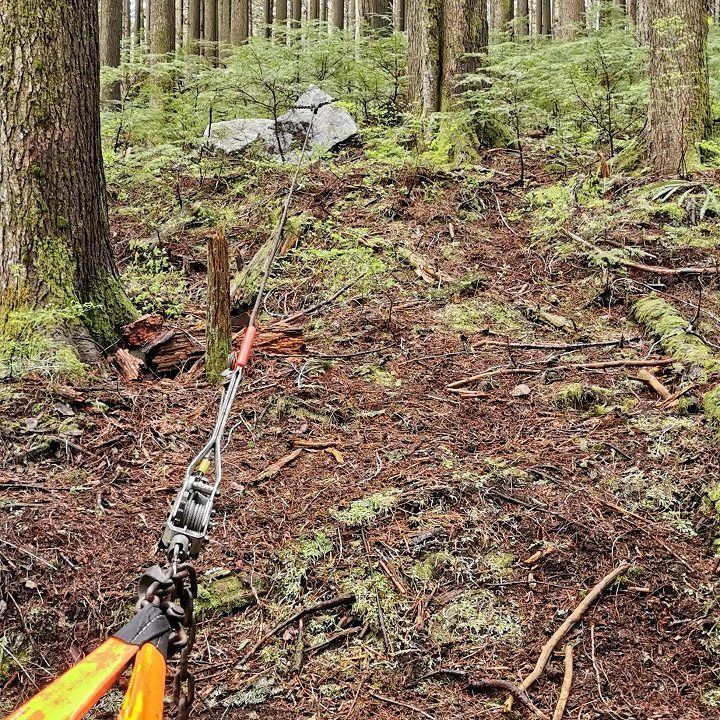 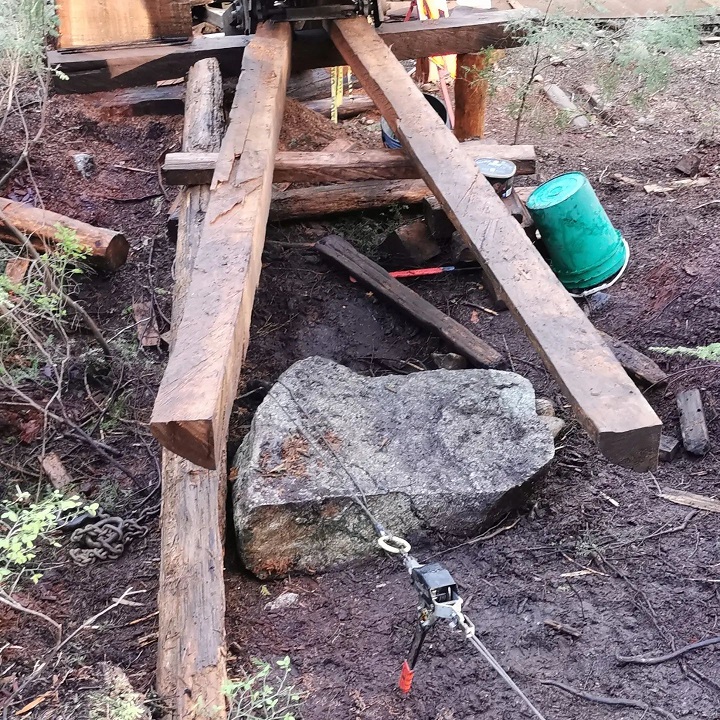 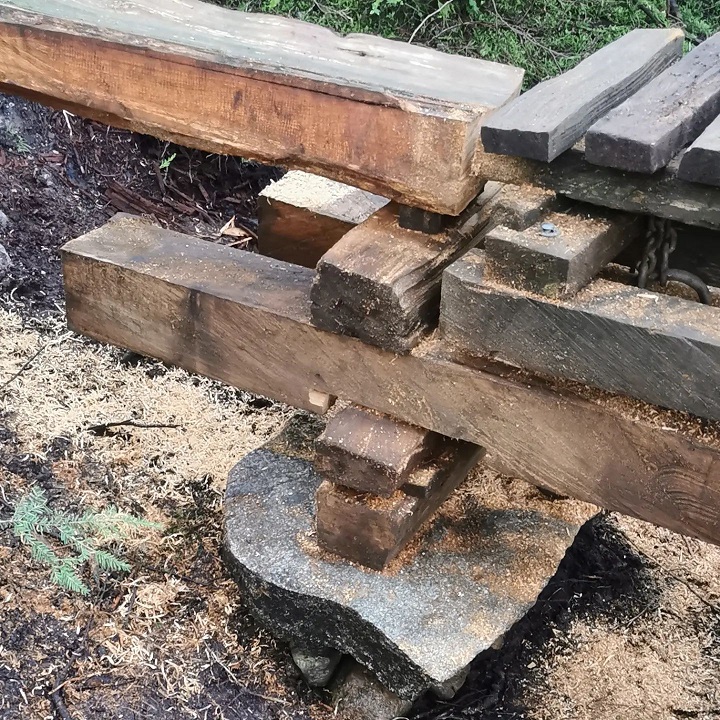