We have a MS250 and a MS180. The 180 is noticeably lighter to hike in with, sometimes even ride with, which I wouldn't do with the 250. It's also noticeably better on gas so lightens the load again. On the 180 I use a Powersharp bar/chain which is awesome. For sure, I'll take the 250 if there's a lot of big cutting to do, but the 180 will do pretty much anything if you take it slow. A great little saw. Pic is the 180 on the biggest log we cut out for GSM. 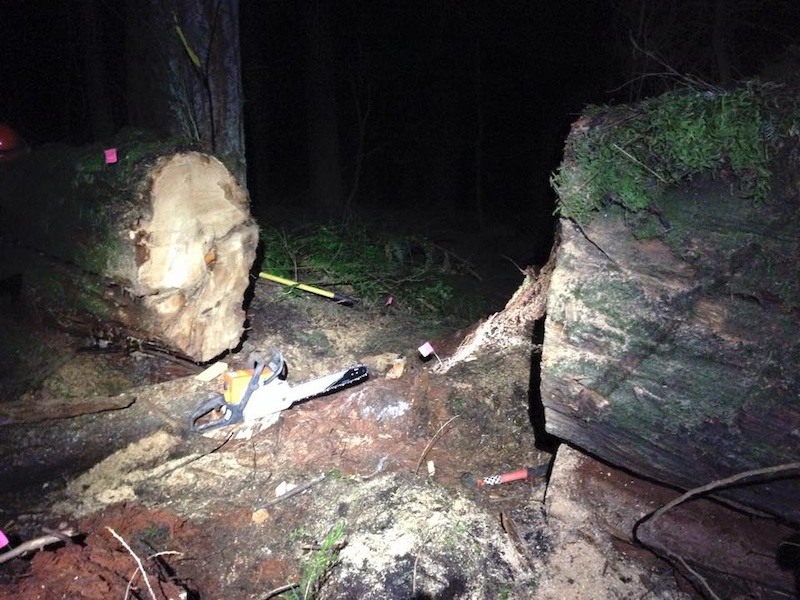 Sustainable will be around forever.

So the Husky dealer in town said that the sale Nechako mentioned above is below their cost, and they won't sell the saws for that price until they get the shipment from the distributor at the end of the month.

That said, I found out that my dad's farming equipment store is a husky dealer, so he's going to grab a 435 for me and bring it up when he visits next weekend.

Now to settle on a pack to carry it.

Dakine Builder pack isn't perfect but works well for what I've been doing. Not cheap or that easy to find though.

Dakine Builder pack isn't perfect but works well for what I've been doing. Not cheap or that easy to find though.

Yeah the new Evoc one looks nice as well, but it's not cheap either.

Good call Skip. I use a Powersharp bar and chain on my MS170. Works great.

A real faller can free hand a chain but I'm not so I use the husky chain filing guide it works well.

even pros it's suggested to use a filing guide - this from the guys at oregon. Bill who runs pacific arborist in nvan has been a pro and saw repair guy for years. he told me the last time he did some training at the oregon facility he thought he knew how to sharpen a chain freehand but he saw/learned the difference and now recommends everyone to use a guide and he does so himself.

if you do it regularly enough you get good at it and the file only needs a couple of passes to keep the chain sharp. i find it's pretty much the same amount of time or less to sharpen as it is to swap out a chain and i don't have to worry about packing extra chains around.

nobody can sharpen a saw like Bill… highly recommended.

I picked up a ms251, without easy2start, and been running it hard for a few months. Way harder than intended for sure, but it's the most pro-est of the prosumer kind. Appreciating the lower emissions. Might be because I'm accustomed to it, but when it's in my builders pack I forget it's there. Once aware of the changes from the 250 no problem spending a few more. Since I'm not pro I also got extended warranty for buying stihl brand oils with it.

I've got a bad habit of free hand sharpening, owned so many guides now and never happy with them and don't carry with me and do most of my filing in the woods. This thread got me looking at them again. Any one tried the stihl 2 in 1? Not sure how it helps with the angle.

As for the guides, the simple Oregon ones work fine. They are stamped on the top with markers to get your angle right and the big reason for the guide is they keep your file straight as you push it through the tooth. Freehand means the file will bow a little bit resulting in not as sharp a tooth.

The Stihl or Husqvarna 2 in 1's are nice, but I like to take my rakers down a bit more for a more aggressive cut.

Another nice tool is a stump vise. You hammer it into a stump and it clamps onto the saw's bar to hold the saw steady while you file.

not a bad way to go on the cheep. Mine is at least 15 years old, left it outside under a stump for countless winters, run old gas through it, generally abused the crap out of it for all that time and it still runs very well. Little more power than the Stihl 170 (39cc vs 30cc makes a difference), weighs the same, fits in a backpack easily, pretty much disposable if someone happens to find it stashed in the bush and walks away with it.

For $125 and a couple new bar/chain combo's I've definitely gotten my use out of it. It's main purpose is for cutting stringers and shake blocks to build bridges, perfect for that although it does ok (just ok) at cutting bigger blowdown if you take your time. Small stuff under 12" is no problem at all.

nobody can sharpen a saw like Bill… highly recommended.