Cypress - New Survey is up - TRAILS ABOVE 1200ft IMPACTED

I don’t have a date for when that multiuse trail will go in but it could be started as early as next year. I don’t know yet.

And so you know, the easier trails we are talking about are SOB and SexGirl and DC. Removing those also destroys the feeders that go into the proposed MTB area, which contains Trunk Monkey and S&M and difficult terrain between.

Construction of Cypress Village starts next year. There will be parts of it that don’t start for quite awhile still you are right but the main part does start next year.

The results of these surveys matter and will matter soon. Counsel uses them as a guide to approve  or modify development plans.

I feel the same frustration with the seeming endless public feedback, but have you noticed the change in attitude towards bikes? There's a new staging area, including a bike wash. The proposal actually has an area for mountain bike trails.

As a bit of a side note, what would be involved in taking over that whole spire of land to the southwest of the ski hill? I don't think anyone but mountain bikers would really want to put that to use. 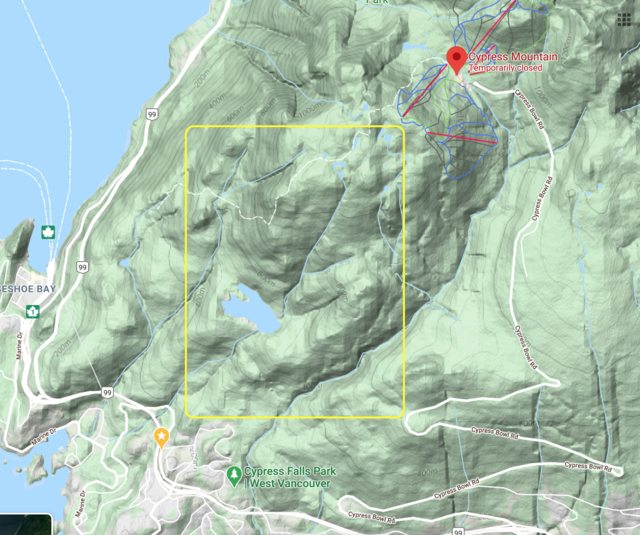 Well, the top part is BC Parks land and the middle is watershed and the bottom part is popular with hikers, but otherwise you're correct 😉

Done! Survey closes today for those who haven't had a chance to complete it.

Pretty stoked though if Morgies can see a re-imagining, always felt like a bit of an afterthought

This was the right move to do right now. I agree that there are risks, but you cant discount the possibility that we would wake up one day and those trails would be closed for whatever reason. This avoids that.

Its a good test case as well - who knows where this can lead and at least its not full steam ahead with all the trails before we see how it plays out.

I can speak to a number of your questions.

Does "improved safety" mean dumbing down those trails? Response: this is a risk but there are a number of safeguards in place. DWV very much wanted NSMBA involved in this and NSMBA was firm in that it would not get involved without support of the local builders. Locals are excited about the prospects for this project but were ONLY willing to support it if the character of the trails remained the same (not dumbed down) and we also included the strict criteria that the current builders must be offered paid work for these trails (no stripping of trails to give to different builders). Without those two, there would be no local support and NSMBA would therefore not be involved and DWV would be out of luck with it all. As would BPP, who is attracted to this project because it shifts potential (although likely nil) liability to DWV for these trails. There might be adjustments, but these trails were agreed to stay as rowdy DH trails and not turn into Espresso on Cypress. That said, I imagine that there will be some saying that they should become more usable for a greater number of people, that is however not what was agreed to.

You need to start somewhere - lets see if people stay true to what they agreed to - we need to give everyone the benefit of the doubt if we want to make progress.

Personally, Im stoked on the idea of a climb trail there. I hate the road and with a new climber in there I might actually venture to Cypress East now and then. Land ownership is a bit of a checkerboard in the area of where the climb trail is headed, so it might get complicated. The days of only DH bikes on those trails are gone - so those with pedalable big bikes might love this new option!

Thanks for expanding on this Ddean. As I was reading your post I also texted with my good buddy (maintainer of Jersey/Meat). This is all pretty crazy, but like you say, there's plenty of optimism to be found if you look for it.

Its a good test case. If we end up with pressure to turn the zone into Espressos, then the builders are out and NSMBA will have to make a decision to stand firm or not - right now we need to trust that people will follow through with what they said. I believe that they will.

We will be fine as long as everyone stands united.

This zone was a good choice to start with because you can start with a small number of trails that see a lot of traffic, and the risk of a pedestrian bike 1v1 were higher. Plus, its above the 1200 ft line which means that its not impacting development in any way.

"Developed in consultation with stakeholders, the agreement outlines the creation of a bi-directional hiking and uphill mountain biking trail as a reconstruction of the historic Old Forks Trail, a route once used by hikers and skiers to reach the Hollyburn area. This new trail will provide safe and enjoyable access for all recreational trail users. Additionally, three existing mountain biking trails—Meat Sweats, Jersey Shore and Morgies—will be formalized, and trail maintenance will commence to improve safety while maintaining the integrity of the original trails."

E-bikers will rejoice at the more direct route, whilst everyone else continues to shuttle (as it's sooooo easy in that zone).

Whilst I'm not against climbing only trails, I'm not sure that zone actually needs one...

Anyway, hopefully, they'll also fix the missing bridge over MacDonald Creek and put the connection to Millstream back in...

Climb trail is because:

1) There is an existing obligation for BPP to put a hiking trail in the Rogers Creek area. This has shifted that to the Mystery zone and changed the classification to a multiuse trail (two way foot, uphill only bike) to bring benefit to riders. (EDIT: one of the proposals was to transition a bike trail from the area around the third switchback to a hiking only trail - it made no sense but we would have lost another trail there).

2) The concept of having downhill only trails ending at the switchback and forcing bikers to pedal up the road (which is viewed poorly due to vehicle risk) or forcing people to shuttle (which is also viewed poorly due to parking, mostly at the top), was not desirable. One needs to assume that bike traffic will increase a lot (who knows if it will), and if you increase the number of vehicles parking or dump riders onto the road to pedal up, you're asking for trouble.

Yes, Mystery will be impacted as it is indeed the Old Forks Trail. DWV was considering making that no bikes anyways due to its history as a relevant hiking route and its condition in some segments. I agree that its a give but its not a big one.