Whistler during the olympics

The Photogs were out in force! Reuters, New York Times ect 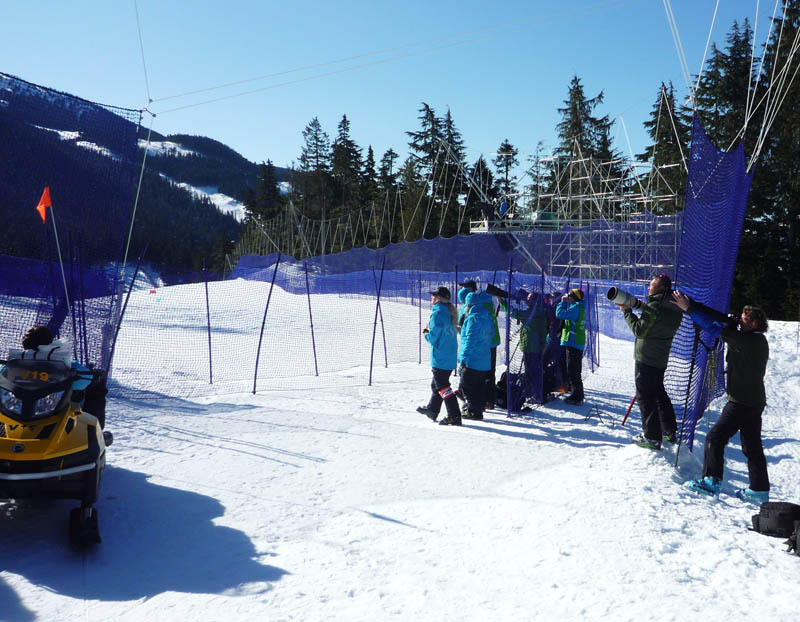 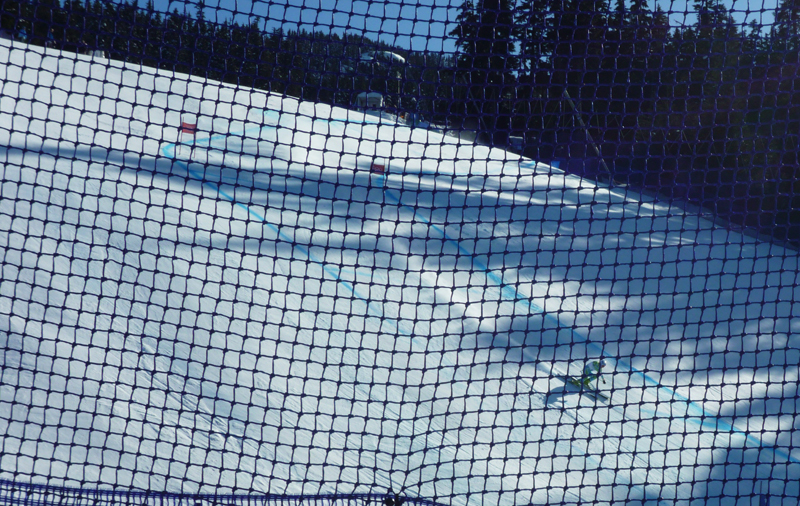 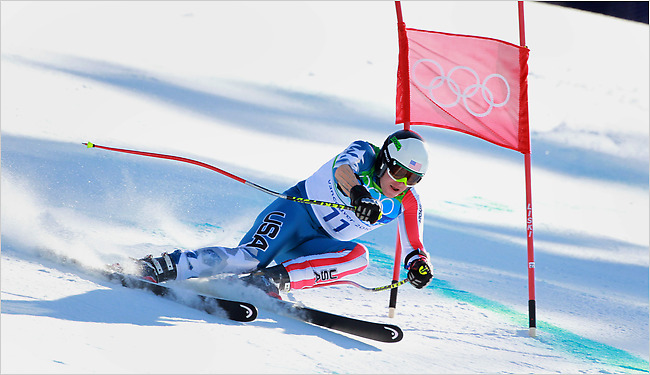 one of the red racer outfits from the opening ceremonies! 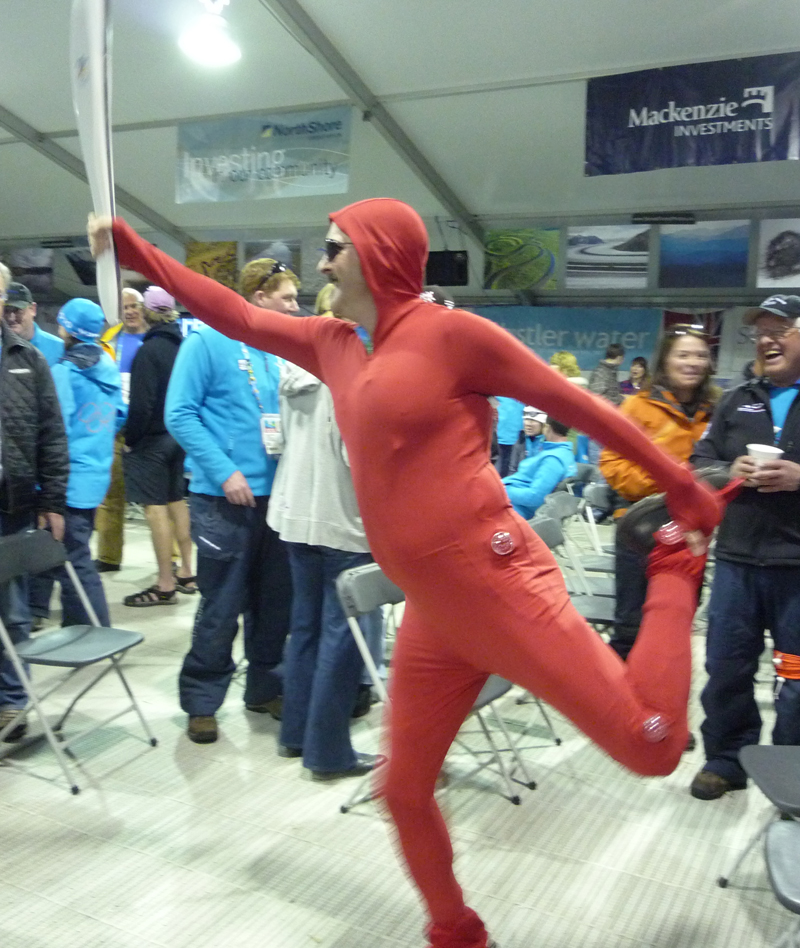 The Men's Combined - Sunday Feb 21 - DH Portion. I was stationed in the middle of the toilet bowl. 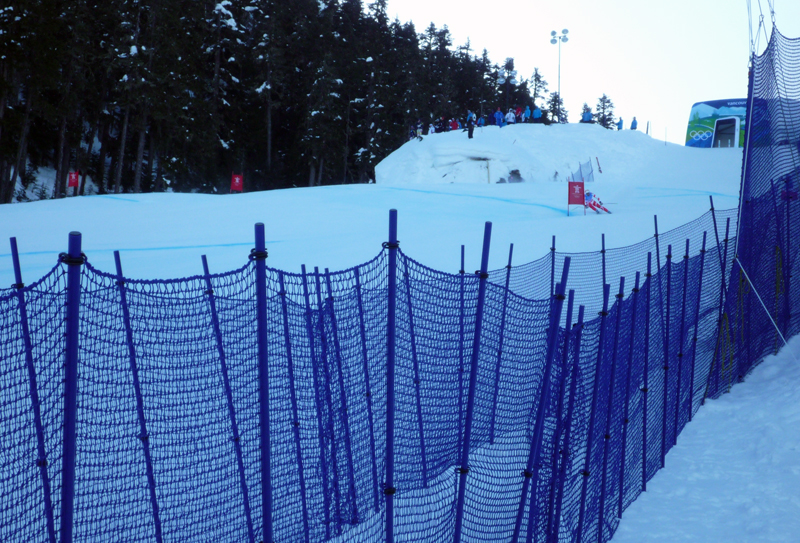 Skier coming out of the toilet bowl just before the weasel. If anyone has skied this slope they should have an appreciation of the speeds these guys are going. Three people crashed on this corner. I think this is Michael Janyk. 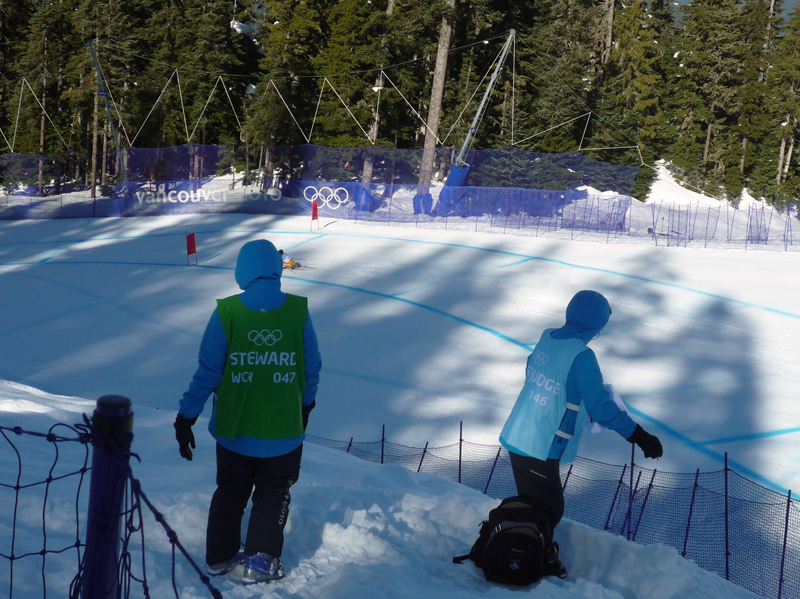 Watching the Village Square TV with hundreds of my closest Whistler friends.

Where's Gooch during all of this?

Where's Gooch during all of this?

Pretty sure I seen him working at Starbucks

those tracks are steep and icey ,you can get Grivel crampons from that shed behind the soup tent so you can stand up othwerwise a fall will result in a very long ride

those tracks are steep and icey ,you can get Grivel crampons from that shed behind the soup tent so you can stand up othwerwise a fall will result in a very long ride

Oh, come on. Testing the nets is fun.

Friendly tip though, do not ride a Willy Bag from the top of Fall Away.

Before each race there was an hour and a half course inspection. The SERIOUS racers would use the whole time and visualize the course. 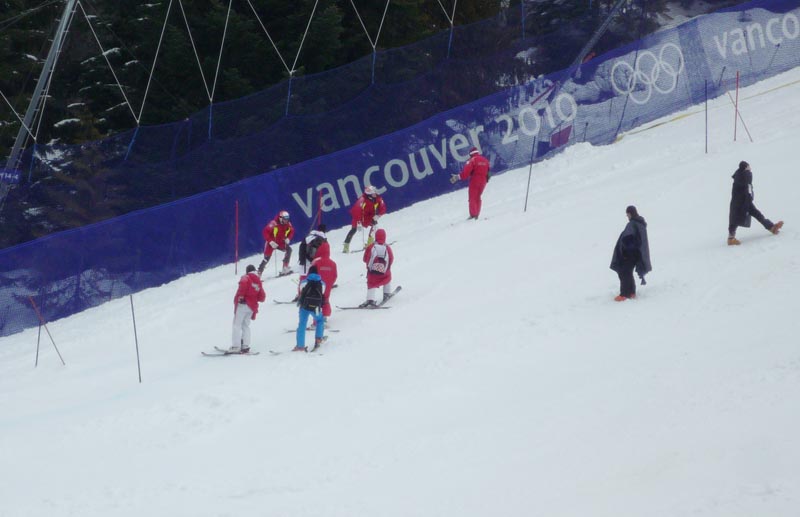 Before the race to get the course ready there was a team of Bootpackers - yes, they are walking with small steps down the course to help smooth it out, then the slippers came in behind them. 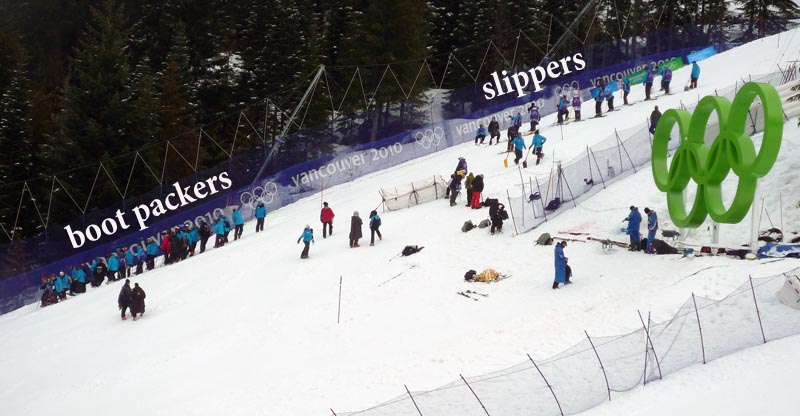 Above this they were dousing the course with water. 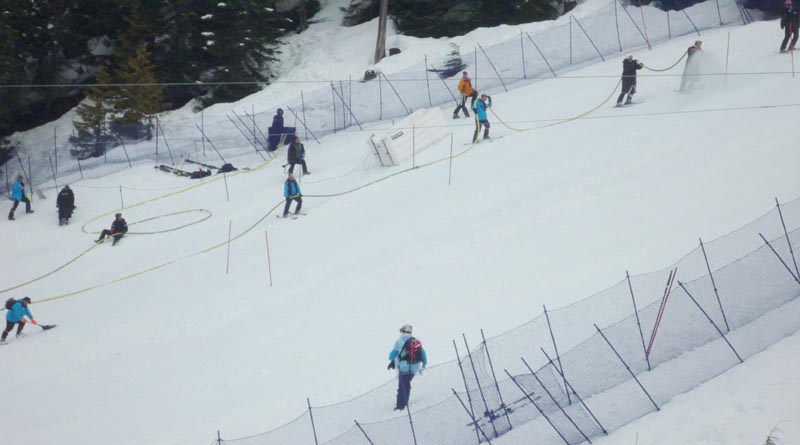 Buddy the coach would stand with his arms stretched straight up and down to create a straightedge reference for the racer to line-of-sight their position on the track with a land mark on the far side of the valley ,one time I seen a coach hold up a ski to do the same thing … they are going off those rises [HTML_REMOVED] jumps blind at very high speed

the local mountains were pretty much fucked by the warm weather and loss of snow but the speed events in whistler had a great track due to early snow which was managed into a great base ,all the snow that fell in the last 3 weeks was just a pain in the ass and required moving or managing by rake/shovel /snowblower or cat,but when the speed events were over and it didn't snow earlier in the week we just went spring skiing for 2 days and there was NOBODY at either hill … SO you could ski right on to any lift

side stepping sucks, especialy doing it going up hill , I sidestepped for 8hrs over 2 days in my new brand dalbello surges that fortuanely came with intution liners ,my feet were OK and the boots are definatley broken in,buckles slightly bent,scratched from crampons … a whole lot of abuse on a new boot in only 2 weeks use

on the other hand the side slippers had a DAMN tough job,I did it a few times that last was at 3am in the morning,its snowing wet snow HARD,snow plowing as one of the line of 10 skiers at high speed in the light of a headlamp pushing 4-6" of wet whistler cement down to the icy track underneath …fucking hard on the legs

the slippers had poles and mandatory helmets but course workers skied everywhere without poles so they could carry shit ,I carried a roll of slip skirt for the A-nets that was [HTML_REMOVED]100lbs ,even heavier than the B-nets which we carried alot if you couldnt drag them when the track was too soft

you never actualy skied on the track meaning you never set an edge to turn which would damage the track , instead everywhere you ski is on a flat ski ,you were allowed to side slip or snow plow and that was done to clear the track of snow …so basicly you spend 3 weeks cranking it sideways on an icy track with no poles often carrying a rake/shovel/drill/net

In our team if you fell everyone in unison sang the opening verse of "bottle of wine true to the vine when you gona let me get sober!"and it would cost you a bottle of wine .I didnt know about the rule and I was the 1st to fall when I hit a big pile of snow sideways … I never fell again .

most people were on short skinny race type skis ,most were wearing AT boots (garmont being the most popular) with vibram soles but they were using them in an alpine binding which isnt really a good idea for proper release IMO so I took my BC rig (verdicts [HTML_REMOVED] freerides) and AT soled boots but sucumbed to the lure of buying the new alpine boots

so course work was work on skis but not much skiing even if you were on the slip crew but the big O was fun ,whistler for the big O was more fun than whistler was for the WC , probably due to a having the luxury condo to party in with a good crew BUT its good to be home in smitehrs …no desire to move to whistler 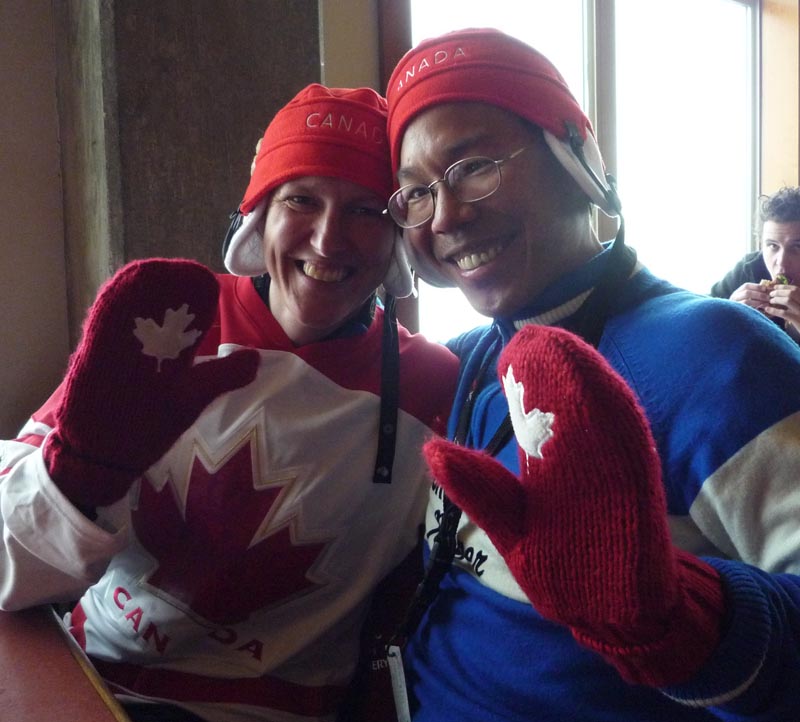 Then they WON!!! Whistler was NUTS!!! 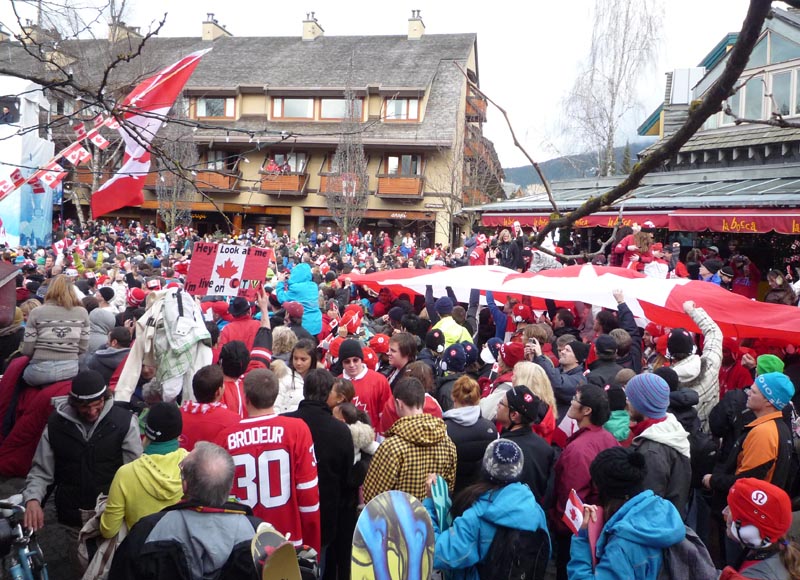