Wow looks at all those wonderful Canadians! I would love to go there. Me too. Disgusted and ashamed. Glad my kids were in bed.

I guess that's what we are though; an angry melting pot.

People starting fires should be shot.

On better thoughts, hope this will scare away mainlanders from buying our properties. 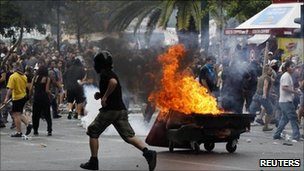 You wouldnt know that was greece if it wasn't for the damn palm tree. They have something a bit more legit to riot about.

Hmm.. not really. It's just a speed bump.

Look at Mexico and how many Canadians have been killed. Yet people are still heading there.

the world thinks Nickelback is from here but still come. if we can handle that we're golden

"We've been attacked by the intelligent, educated segment of the culture"

Hmm.. not really. It's just a speed bump.

Look at Mexico and how many Canadians have been killed. Yet people are still heading there.

15 canadians murdered or died suspciously in Mexico since 2006. we had more die in Alberta last long weekend due to highway accidents. people still driving…

i don't see your point.

I'm just worried for my sister. The last text I got from her was…

" Im at the front of the crowed with my friends to see what happened and the police are threatening to start rubber bullets and tear gas."

I later heard from another budy the rubber bullets are happening and saw all the tear gas on the news.

Glad my kids were in bed.

Disagree.. my nine year old was full of questions.

Hopefully she grocked the clusterfuck that was upon us tonight. Bonus points if my six year old picked up any spare bits.

Innocence ends after forty-five minutes of loitering in my books.. no fucking reason to be there now.

Dont worry guys, I still like you all. Even if you all talk funny and are scared of tiny spiders.. :D :D

Innocence ends after forty-five minutes of loitering in my books.. no fucking reason to be there now.

Agreed. I've walked briskly/half ass-ed jog from Denman to just before UBC in that time.