I bet that he still cheated.

"psst, Mikey, psst, is that a unicorn or dinosaurus?"

🤣Talk about touting your participation ribbon.

"Got really hard there at the end" Naming the f@#$*ing date is the last question.

Got through labeling 3 common animals, but really had to put on his thinking cap for today's date eh.

"Doctors we're surprised at my results". Not for the reasons you think Donny Boy... 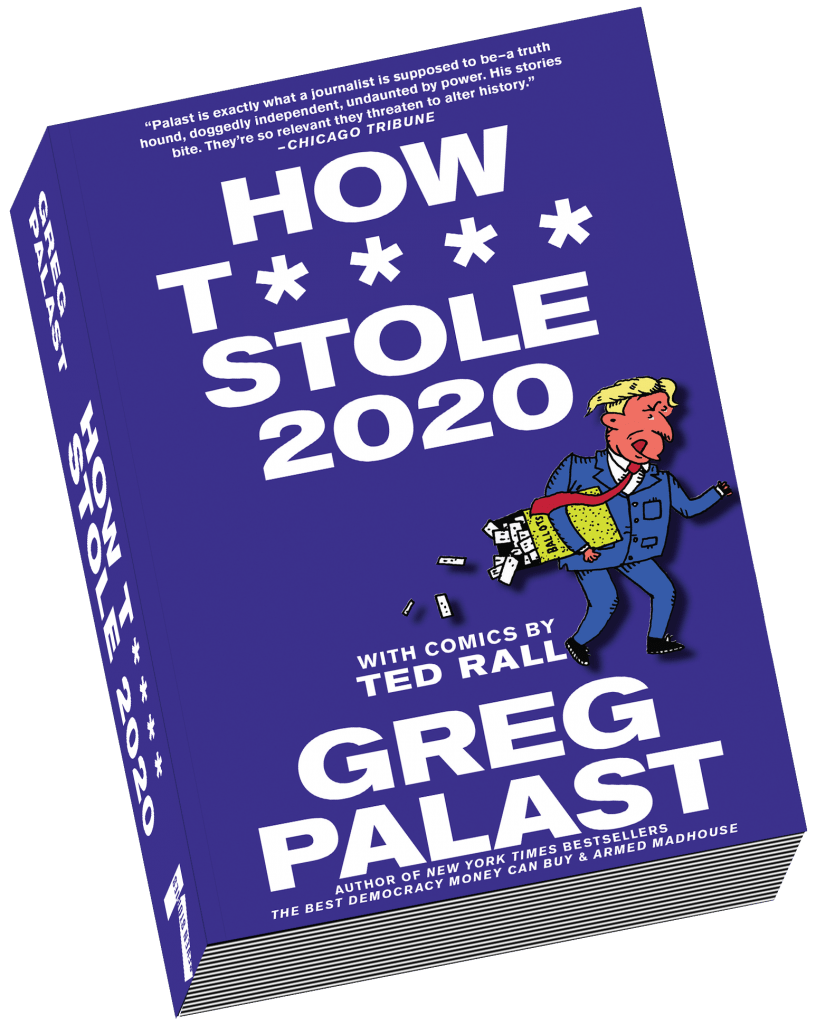 Palast: Thank you! That’s why I appreciate Counterpunch. You guys follow the money. You’re one of the first people to bring this up.

You don’t steal votes to steal elections, you steal votes to steal the money. This is vitally important. For example, we heard that the Koch brothers were #NeverTrumpers. They actually opposed Trump in 2016. So where did Trump get his money? How I say it in “How Trump Stole 2020” is, Donald Trump is not a billionaire. I can tell you that for certain. But he plays one on TV. So he’s a glove puppet billionaire. But who’s fingers are in the gloves? That’s what I was also trying to lay out in the book, was to follow the money.

So, for example, while the two Koch brothers were #NeverTrumpers—David and Charles—the third Koch brother, Billy Koch, was the first billionaire to put in really big bucks for the Trump campaign. Now Billy Koch, the third and rarely noted Koch brother, who is worth about $7 billion—as I note in the book—he used to get a little tipsy and call up a reporter—me at the Guardian in London—and rat out his brothers, David and Charles Koch, on all their crimes—felony crimes—in detail. I had my recorder on and you get some of that in the book.

But why does Billy Koch need to buy a president? None of the Koch brothers are Republicans, just so you know this; they’re libertarians and they don’t trust the Republican party. So why would they support a Republican? Because of the money. Billy Koch needed the Xcel pipeline because he runs a company called Oxbow Carbon. They take the carbon sludge out of the Xcel pipeline, which is taking tar sands oil from Canada down to Texas. What do you do with the tar? It dries out and becomes this filth which is petroleum coke, which is like coal made from oil sludge. It’s so filthy you can’t burn it in America but you burn it in China and you still warm the planet.

Billy Koch needed this planet-destroying stuff. Trump was hostile Xcel pipeline because it is, after all, foreign oil coming into America, but he got a lot less hostile when he got a big, big check from Bill Koch.

The Kochs may not trust the Republican party, but their fingerprints are all over the current GOP.  They are not really libertarians either except in a "corporations should do as they please" kind of way.  I suspect that they are shying away from Trump mainly because he is an obvious trainwreck that they don't want to be associated with once he flames out.  There is no way they are not loving Trump's willingness to adopt all things from the Federalist Society, like Bill Barr, Kavanaugh, and hundreds of their picks for federal judges. That Axios interview was some pretty funny stuff. Trump can't be that dumb.

^^^^ What an effing trainwreck. Just say that John Lewis was a national hero FFS.  The guy is so freaking shallow he can't even lie and say he was a great guy despite the fact that he lies all the time.

That Axios interview was some pretty funny stuff. Trump can't be that dumb.

"And there are those that say you can test too much. You do know that."

Oh my that interview was a side splitter, thank you. It looks like he's about to blow a gasket.

Jimmy Fallon's take at 5:00 is nearly as funny as the real thing 😅:

^^^^ What an effing trainwreck. Just say that John Lewis was a national hero FFS. The guy is so freaking shallow he can't even lie and say he was a great guy despite the fact that he lies all the time.

^^^^ What an effing trainwreck. Just say that John Lewis was a national hero FFS. The guy is so freaking shallow he can't even lie and say he was a great guy despite the fact that he lies all the time.

Still, doubling down that Russia is a non-story eh?  Whatever floats your boat I guess, but I don't find black counterpunch any more convincing than the regular one.  It is just people not in the know voicing their support for alt-right theories without any evidence.  "America is bad", or "the news lies" is not evidence.

Start reading from sources that will occasionally hop on a flight and do an interview or find source material.  It will expand your mind.

I have read enough of these stories now that I think I can start my own site though.  The formula is easy and the audience easier.  Do they make any money?

That is top drawer stuff. When his presidency is over I hope they make a movie.