LOL I here you , my van has a leak in the roof , and I wrecked my shoulders in late Oct and it poured then dumped snow .

A couple weeks back it was finally dry enough . Now it,s covered in snow and frozen inside and out due to the moisture . But at least I got it tarped and the puddles out that would be frozen solid .

By the way my own (temporary) set-up for my Touran. It needs some refinement but works alright.

Basically two plywood boards which are attached to each other at the end of the day, both front seats have to be pushed forward as far as possible.

Leaves a space of 2 mtrs. Camping chairs, table and food in a box go below. Behind the seats I store the luggage and water.

Definitely cheaper than the set-up I could buy for this car.

I always lock mine to the vehicle or a tree.

I have a Thule hitch rack with a lock which is pretty nice since I can "fold" it away from the rear so I can open the tailgate without having to remove it.

For those talking about showers. Spotted this at MEC on the wekend.

Picked up a 1989 17' Bigfoot the other weekend, I'm very excited. What with having an 8 month old I was able to convince/trick the wife.

Spotted this on Outside....

Nice! I'm looking for a big foot how much?

Like that Bigfoot Lobot, I was getting tempted by those 16'-ish trailers when faced with the prices of Bolers and Trilliums etc. Ended up keeping it a bit more basic and picked up a 2000 Coleman tent trailer. Looks to have a ton of storage and lots of space at a pretty small size and weight (just under 2000lbs dry) and the SunBrella material over the slide-outs is pretty confidence inspiring.  These things actually come with heaters so I'm thinking they retain heat better than I assumed.  Should be nice for comfy trips with the wife (she doesn't do tents, particularly with a bun in the oven) and will make dirtbag Tofino weekends with the bros pretty plush.  Really looking forward to taking it out in the next couple weeks: 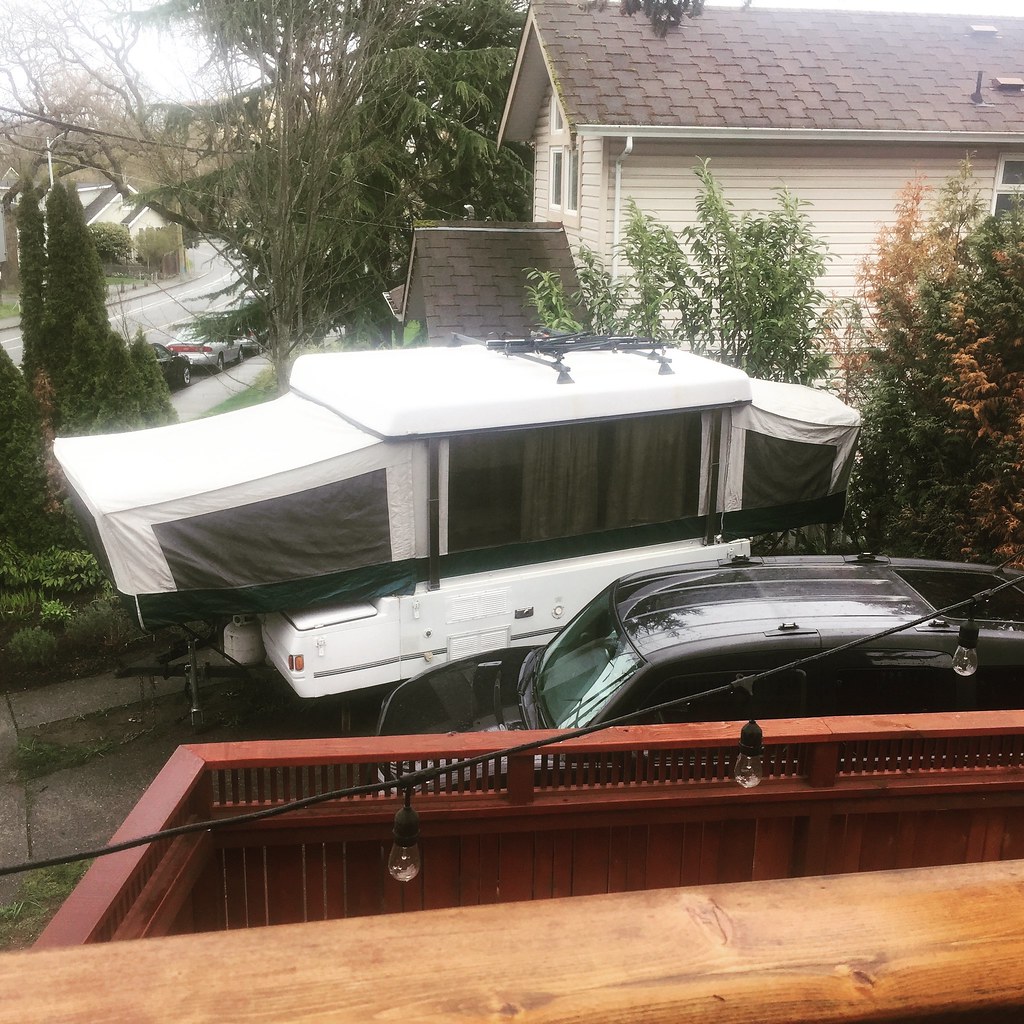 On THE DERGE (yes I have a drop hitch for it now): 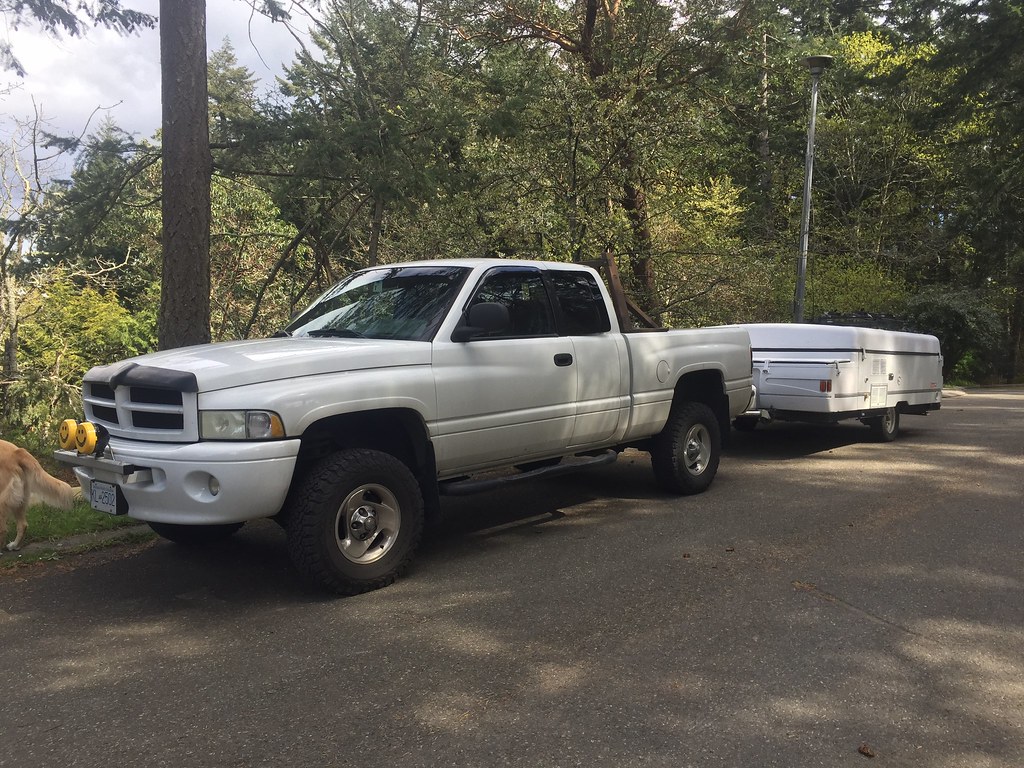 Lennie likes it already.  With a King, a Queen and two fold-out beds he'll have plenty of nice spots to get comfy. 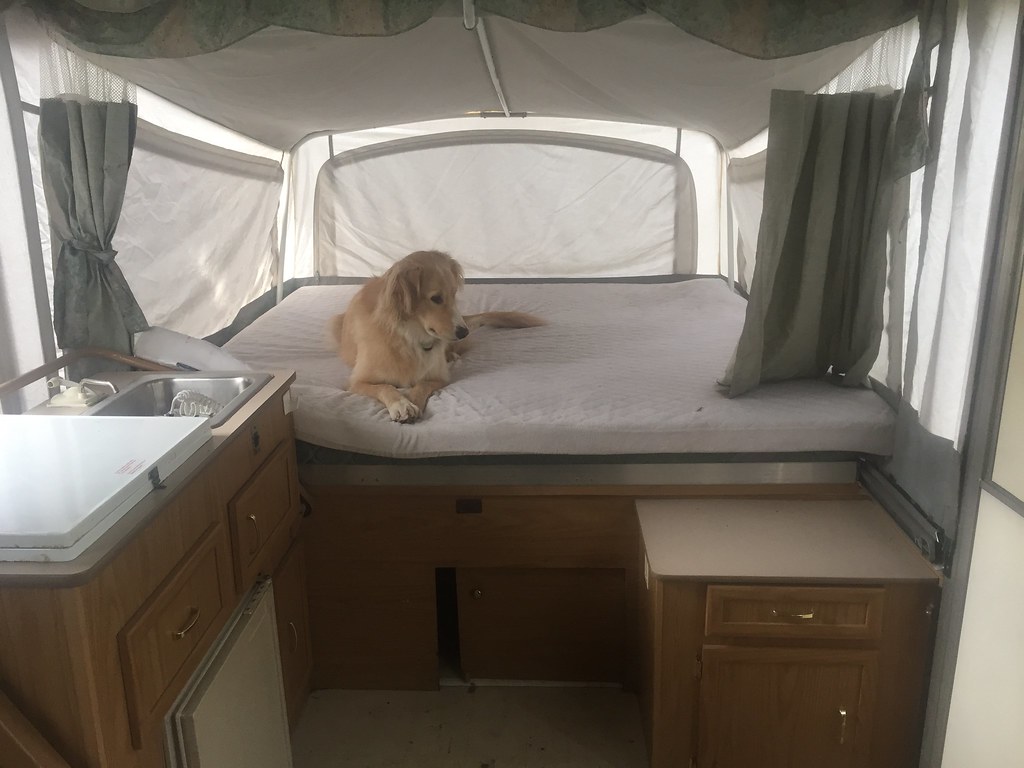 Aside: Anyone know how to post photos from Flickr on the new board without digging around in the source code?   Grumble grumble...

I made the move from a capped Tacoma to a capped Chevy 1500.  No adventures yet, but immediate impressions are the extra space is amazing and my average fuel economy on a 6.2L Crew Cab is 25%-33% better than my 4.0L Accesscab Tacoma.