to be fair we mostly stayed in motels because it was pretty cheap to split between the three of us, plus shower and mini-fridge were a big bonus in the motel room since we didn't have space to bring more than basic camping gear.
Still really nice to wake up on the mesa though…now that I've got some good sites scouted I know where to go next year for a longer stay

Do you have any experience with the solar car-battery chargers Craig? I don't like the idea of draining my battery in the middle of nowhere but curious if that would work. I forgot about the expedition coolers by coleman, that's probably still the best way to go…I used to have one until someone pilfered it from my backyard (who steals a used cooler?)

Picture a Westphalia with a real engine and suspension. Great van if you can afford the gas.

I get almost the same or better mileage than a westy. A bigger engine running at optimum rpm is way more efficient than revving the crap out of a tiny VW westy engine.
I have bud who had a beautiful 87 westy , his mpg was consistently less than mine.

Im going to piss my money away on one of these

Saw a few van's like CraigH's, that would be the ultimate setup as far as I'm concerned..

I've had the van 8 years now, and if I was to do it again I think I'd go with at least a 1 ton 4x4 truck chassis, remove the truck box and put a pop-up type camper box on the back. Something like this:

(We met the owner of this truck in Washington last year at the Overland event in Plain, WA)

We do use 2 coolers. I need to replace my smaller beer/drink cooler with an Expedition model. The problem is that no one in Canada sells the smaller sizes, I'll have to buy that one on the US.

Do you have any experience with the solar car-battery chargers Craig? I don't like the idea of draining my battery in the middle of nowhere but curious if that would work.

I don't have experience with solar battery chargers although my parents used one on their sail boat to keep the house battery topped for years.

For people that have Overland type RVs like Sportsmobiles running solar on the roof is very common.

They do take a beating being exposed to the elements up on the roof.

My worry is tearing them off on all the BC logging roads with low hanging trees.

I use it on anything more than just flat gravel logging road.
Pulling up a steep gravel road is much easier on both the vehicle and the road, the back end doesn't bounce causing washboard.

I've never had it stuck as I'm conservative on what kind of terrain I'll take it into since we are usually by ourselves, I don't have a winch (yet), and it is so heavy that even if there was someone else there they likely wouldn't be able to pull us out anyway.

Three way fridge FTW. 120v, get it nice and cold before you leave. 12v, keep it cold while driving. Propane, keep it really cokd while youre sitting.

Need?
…I'm conservative on what kind of terrain I'll take it into…

LOL, okay that was probably the most rugged trail we've been up but it wasn't muddy that would have led to us getting stuck.

I guess we could have broken something in the drivetrain going up that eroded chute. Luckily I had a spotter to help.

Saw one of those in Tofino a few weeks ago….soooo cool!

bringing this thread back into the mundane, here is our eurovan at the main campground in waterton couple days ago. cramped for sleeping us 5, and can't even drive us all together so we needed to being our minivan too.

but keeping it for retirement i think 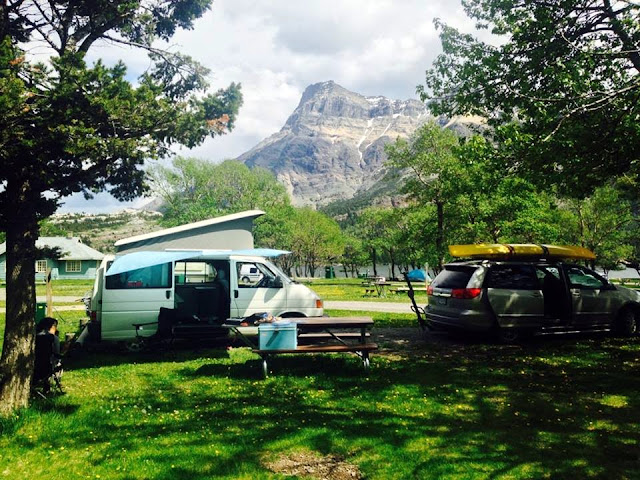 I wanted to share my excellent customer support experience with Primus/Brunton.

Last summer the piezo striker stopped working on my Primus propane stove and it also started to get a yellow and sooty flame. On my last trip in Nov it was burning very poorly and left lots of soot all over my cookware.

A couple weeks ago I finally got around to sending off an email to see if there was anything that could be done. After a few very prompt replies, the customer support guy offered to send out a new regulator and piezo if I was willing to install them. I said I was and within a week the new parts arrived from Colorado.

My stove is back to normal and ready to go. Thanks Brunton! I love it when a company supports their products.

A pic from the trip in Nov.