"Evacuations are underway in the Philippines Islands as extremely dangerous Category 5 Super Typhoon Haiyan heads west-northwest at 20 mph towards the islands. ………….The Philippines lie in the most tropical cyclone-prone waters on Earth, and rarely escape a year without experiencing a devastating typhoon. "

well we left our house to be with family who have a less exsposed location.
got everything done I wanted to, windows, boarded, stocked up on food water fuel, charchoal.
Post storm could be ugly times but right now we are just going to sleep….so I can recover a few witts and be ready for game time.

its still tracking to the north tip of Cebu Island…hope it at least stays on track. And at least it will happen during the day…darkness would be extra terifying. Also if the eye stays north of us we will get the return swirl wich are a little weaker….in theory.

what a beast, last direct hit was 1990, most go north to mid Luzon and up
http://www.cyclocane.com/haiyan-storm-tracker/

They are destroyers of civilizations.

Mud slides are really bad because of the terrain. Hopefully people will stay away from slopes.

Or if you're hard core, you could get out and downhill on some of those slops… ;)

we will be wearing gear and helmets,lol,.
I got wife and daughter to wear their life jackets for body protection, have rope too
Mactan is very flat and rocky…no flooding or slide risk. Storm surge is in the back of my mind though…but should not be a factor since eye should be north and the rotation helps us a little.
the rain has just started….
geeting some shut eye.

This could be really ugly.

Raging super typhoon Haiyan has become so powerful as it approaches the Philippines that it has actually gone off the scale, surpassing the maximum level of 8.0 to become a magnitude 8.1 storm.

Wind speeds in this incredible storm  which is known as Yolanda in the Philippines  have been measured at 305 km/h, and wind gusts have reached up to 370 km/h. By comparison, Hurricane Wilma in 2005, currently ranked as the most powerful tropical cyclone ever recorded, had wind speeds maxing out at 295 km/h, and an Atlantic storm only needs to reach wind speeds higher than 252 km/h to become a category 5 hurricane. Different storm scales are used for different parts of the world, but one that sees more universal use is the Dvorak scale, which ranks from 1.0 to 8.0.

According to what meteorologist Eric Holthaus wrote on Quartz:

Within the last hour, one real-time estimate of the storms intensity has actually ticked slightly above the maximum to 8.1 on an 8.0 scale. This meteorologist, for one, has never seen that before.

Thousands are being evacuated in the Philippines ahead of the storm, and several regions of the Visayas Islands are now under the strongest storm alerts used by the nation's weather service. The intense rainfall from the storm is expected to trigger landslides and a storm surge over 5 metres high is likely to push onshore ahead of the storm.

It's hitting the Philippines straight on with 200mph sustained winds and 23 foot storm surge.

Hopefully it'll keep moving fast an not drop too much rain.

I wonder what scale the news story above is using to rate this thing?

Nothing listed on this page lists winds that high:

Wiki page for this typhoon:
http://en.wikipedia.org/wiki/2013_Pacific_typhoon_season#Typhoon_Haiyan_.28Yolanda.29

The size of the storm is pretty much the whole country, which is as wide as New York to Chicago.

You now got some damn fine bragging rights, Bushman!

Haiyan had winds of 190 - 195 mph at landfall, making it the strongest tropical cyclone on record to make landfall in world history.

Manila is unaffected fortunately…I have a Sister-in-Law there. They still have phone connections etc… 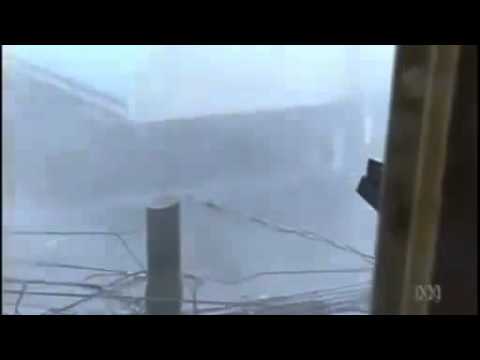 Wow, it's hard to even comprehend. I saw calgary's flood and it made sense, I could understand the destruction. This is just something else.

Terrible. As grim as that sounds though, so [HTML_REMOVED] so from another forum posted this…..

"I live in Cebu and luckily not too much damage although my power and phone lines were out for 24+ hours.
A number of vessels in the Mactan Channel were moored alongside at the start and still alongside when the typhoon had passed."