Just looking to get a few opinions on vehicles as I'm not entirely thrilled with my current truck. I'm driving a Toyota Tacoma, it's the crew cab, long box, 4x4, auto. There's nothing wrong with it per se, but nothing is truly spectacular about it either. It's been reliable, fairly comfortable, does great in snow, gravel and off the beaten track, but most of my driving is in the city, it's a pain in the ass to park, and there are a bunch of minor (and not so minor) things that all add up to leave me less than impressed. To top it all off it's probably the most boring vehicle I've ever driven. I've owned some pretty great cars and trucks (VW, BMW, Subaru, Nissan, etc) and this Toyota is pure driving appliance. It ticked all the boxes at the time when I bought it but now after owning it for awhile I'm lusting after something a bit more exciting…

Here are my "requirements":

- Need to fit a fair bit of gear - we have one young kid now, and haven't ruled out the possibility of having more - so need the space for car seats and all the associated stuff that goes along with travelling with kid(s)

- More back seat space would be nice, it's pretty cramped in the Taco with even 3-4 normal sized humans in there

- Not boring to drive! Something that doesn't feel like a 12 year old body-on-frame truck would be nice

- Something with a few modern amenities would be good too. Hell, even my previous '07 Nissan Frontier had things like heated mirrors and a basic trip computer, both of which the Taco still lacks…

- Need to haul up to 4 bikes, skis, wet/muddy gear

- Something friendlier to drive in the city but also a comfortable highway cruiser for fairly frequent trips of 400-800km or so to visit family etc.

- Some sort of "off road" capability - we'd still like to get to the more remote places to go camping, fishing and exploring, maybe the odd shuttle day, and don't want to give up too much in this area. Don't need anything that can tackle full on 4x4 trails, but rough and/or non-maintained back roads aren't out of the question

I'm at a bit of a loss here, there don't seem to be too many new vehicles that fit these criteria that I can get excited about. I have briefly looked at the VW Touareg since it has all the modern amenities (I am a sucker for luxury), can still hold it's own in light off roading situations, and has a fair bit of cargo space. Downside is they are bloody expensive and they no longer sell the diesel after that whole debacle (though would likely be looking at used anyways). Also love the Land Rover LR4 but they are also crazy expensive (although depreciate quickly so one a few years old isn't unattainable), terrible gas guzzlers, reliability is iffy and for reasons unbeknownst to me my wife refuses to even consider one haha.

So NBR, what say you?

New Honda Ridgeline? SUV in the front and pickup in the back.

I can't think of anything that matches your criteria. Capable, fun to drive and easy to park sounds like unicorn territory. Fun is out of the question for big vehicles unless you're shelling out big dollars I'm guessing.

N+1 is an option. The wife and I just went to two cars (Element and old Ram) and I alternate between thinking it's the dumbest thing we've done financially in a while (generally when I fill two tanks in a weekend) and loving the freedom of having two cars, one of which is MY truck and thinking the $$ are totally worth it.

Keep the truck, pick up a cheapish sports sedan/wagon or convertible for running around and having fun. I like driving older BMW's myself, but fun and reliable are hard (but not impossible) to get in the same car for cheapish.

Mercedes/BMW/Subaru legacy GT wagon? I'm grinding her down on selling the element for something sporty myself, a couple trips in my dads Boxter on sunny days generally gets her pretty into the idea of having a convertible in the driveway… yes yes it does.

Please tell about the mechanical issues you have had and what year your taco is. Just curious.

the new 4 runner sounds right up your alley.. it would just need a bike rack
Tundras are probably the best bang for buck Id say, my buddy rallies his pretty good its a tough fuckin truck.

I have no need for a full size truck, although the Raptor does look fun. But I also don't want to be THAT guy… And at the moment my Tacoma only has literally 2" of room front and back to fit into my garage, there's no f'n way a full size truck would fit in there.

The new Ridgeline does interest me a bit, but the styling is still a bit weird. Maybe need to check one out in person.

Tashi - we already have a fun second small car for zipping around town, but the problem is as soon as we want to go away for the weekend we automatically need to take the truck since the car is too small for all the baby gear. If anything I was hoping to go the other way and find one vehicle that can replace the two while combining the best attributes of both. Definitely unicorn territory…

From everything I've read about the new Taco and 4Runner I don't think the new powerplant will work. The 3.5L has better emissions, worse fuel economy, and less power (hard to believe that last one).

I don't think the vehicle OP is looking for exists. Off road, fun to drive, easy to park (Raptor?), fits 3 adults in the back, doesn't cost a fortune? Can it fly and shoot rainbows for exhaust while we're at it?

Set some more reasonable expectations, decide if you buy the vehicle you want or the vehicle you need. If you can't decide then keep the Tacoma and buy a FRS/BRZ when you need to drive something fun.

You already have two cars? Huh. I guess I don't see why you want to ditch the Taco. Maybe add a backup camera, trick out the suspension and engine a bit and BAM! - easy to park and fun to drive. You have your work cut out for you if you want to make that interior something special though. Blegh.

One car that's all that doesn't exist. Well, maybe some super awesome SUV, like a G-Wagon or something, but I've never actually driven one of those. I've driven a Audi Q7 around Toronto and it was boring and a pain in the ass, I'd rather just drive a Euro luxury sedan if I want to be pampered.

edit: maybe you need to replace your small car instead - a nice sporty wagon is easy and fun around town and can handle weekends away with the kidlets crap in tow. Just let the Taco be a boring truck, 'cause that's what it is and always will be.

The X5 is kind of fun to drive, has the sensor package and backup camera to make it easier to park, used ones are not cheap but not ridiculous. Fairly reliable.

My cousin has a 2014 (lives in Quebec), and his only complaint is that he's never had so many speeding tickets in his life than since he bought his X5.

There is also the Acura ZDX, it's a weird hatchback based on the accord platform. Surprisingly fun to drive, comes in 4WD and is fairly practical with the weird hatch thing they have going on. Rode passenger in one a couple of months back, was pleasantly surprised. There is also a less fancy Honda version, named the Accord something or other. 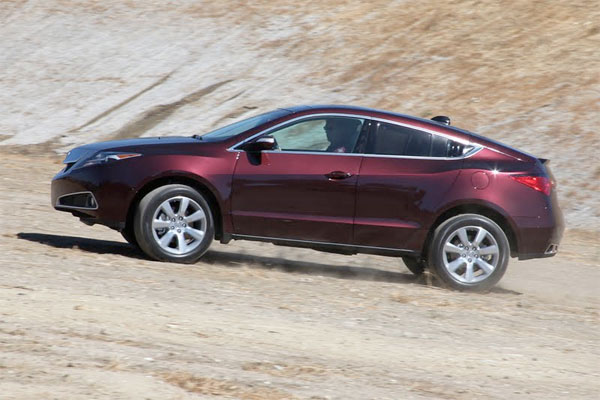 I'm not too familiar with them, but what about a Mazda CX-9? Not sure how "fun to drive" it would be but I think it could tick a lot of the other boxes.

I'm also curious about this thread because I am in the same boat - have a young baby now and need a bigger vehicle but don't want anything too boring.