Meanwhile, in the "war on drugs"

7.66% of the population were Hispanic or Latino of any race.

Kid's name is Lao or Cambodian … which probably counts as Hispanic in Alabama.

"They told me that they had taken my baby to the hospital. They said he was fine he had only lost a tooth, but they wanted him in for observation."

Totally agree with you. I'm pretty sure that response is outlined in Book 9, Chapter 4, Verse 4 of What To Say When You Explode A Baby.

I meant…the screw up was the idiot who said go for the raid based on no info other then the suspect they where trying to grab may be there. Which if the genius was on the ball and got the info would know that there was a baby in the house. Maybe he thought the toys around the hard where a ruse…who knows.

SWAT goes in following their SOP which includes tossing in a Flashbang to decrease the chances of a gun battle and taking the suspect alive.

So what if there was no baby and just some random innocent person who prefers to sleep in the corner rather than the bed? What if the bed was where they threw the flash bang?

I don't know about the rest of you guys but just tossing on the bedroom light in the middle of the night is enough to fuck me up for a good minute or two.

The Whack Em and Stack Em Mentality of American Cops

The SWAT team didn't screw up here. The screw up was the Jack Ass who gave the okay with miniscule intelligence that this was the house. Sadly SWAT will be blamed while those who failed their jobs before hand will get no public grilling.

On the one hand it could be argued that they did not screw up in the sense that such teams use tactics like the one described in the original article to make sure that they do not have to enter a danger Zone under fire - even the special tactics units from the local police departments over here use flash bangs and the like.

But having shitty intelligence and then blatantly telling the mother the lies about her baby is a major screw up and shows just how arrogant, incompetent and whatnot most policemen are.

To protect and to serve, I could not get any "protect" and no "serve", neither. The police HAS TO BE the force that saves the citizens from harm - and not be the one that the citizens should be afraid of.

As I have already posted in the "Cops" thread - we are not talking about some shady Third World country here.

It's because of the veterans, stupid!

If only there had been a good guy with a gun in that room.

Its so simple. We just need more guns. And armed security guards in every bedroom to protect the children. 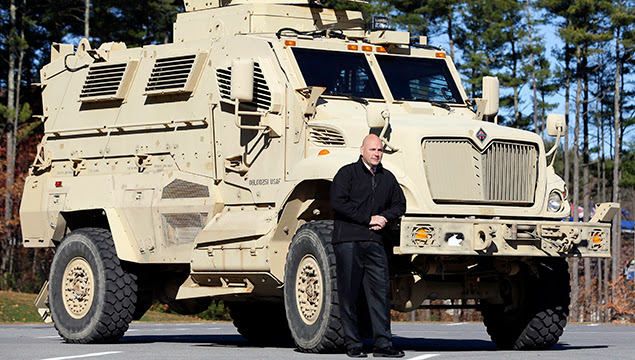 There are even university campus security SWAT teams. You can argue that the militarization of the police in the US is a by-product of the weaponization of the American civilian. Which came first, the chicken or the egg, is debatable but it seems to be feeding back into an endless loop of violence..

How about the militarization of school districts?

Man, take it easy will ya? How the fuck do you expect the arms manufacturers of 'merica and their spin off industries to keep turning a profit w/o penetrating new markets, eh?