David Lang's photos from the riots

best shot Kesler had all series

Brian is on a roll. Moar please.

^^ guy who get's knocked out is smashing the car in the beginning of this clip. Well deserved! 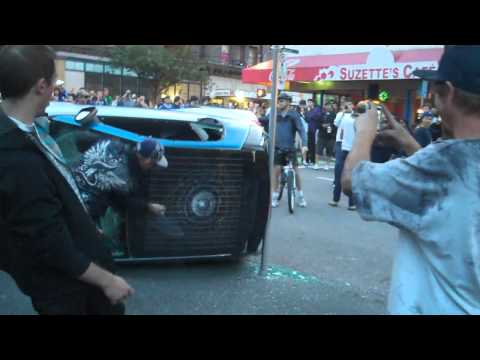 The guy stands up and does something, and the rioters cower like the slime that they are. Asses.

^
Holy shit, that's the infamous Brock Anton who knocked him out! Same white sunglasses! That guy better not drop the soap in ye old jail house!

don't you get white sunglasses thrown in when you buy an Ed Hardy shirt?

"We've been attacked by the intelligent, educated segment of the culture"

no you get douche stick. everytime you put your shirt on you put the douche stick on and BAM douches flock to you

This guy even had his domain name added to the van he is standing on.

Send them to 3rd world countries.

So glad I live in a little patchouli bubble in the middle of the mountains, never have to deal with this kind of idiocy.

I'm all for civil disobedience but in a non-violent manner, and for christ sake make it over something more important than a stupid hockey game.

Send them to 3rd world countries.

they wouldn't last a week

they wouldn't last a week

Thats the point. Actually send them to American Jail.. :)

^^ guy who get's knocked out is smashing the car in the beginning of this clip. Well deserved!

The guy on the far right with the facemask is the guy that tried to hit me with a crowbar last night for being there taking photos!! fucking douchebag!

I just this moment saw him on cbc 10 o'clock news smashing a table into a car that some random girl was trying to protect in vain. I hope he's found, tarred, feathered and paraded around town.

i'd say this is a fairly incriminating shot. dumbass:

This kid is in shit for sure. He's a promising water polo player from out Maple Ridge way.

i'd say this is a fairly incriminating shot. dumbass:

Seems to actually be the nathan kid mentioned in the thread. If you read all the photo's comments you'll see he gets ID'd several times. Apparently he had a scholarship to some US university to play water polo, people forwarded the picture to his potential school. They also post his phone number. Stupid fuck deserves everything he gets coming to him.

Cops shoulda been using real bullets.. Sorry but if I ran this country, the second you start rioting you have no civil rights..

i went black over two years ago and haven't gone back