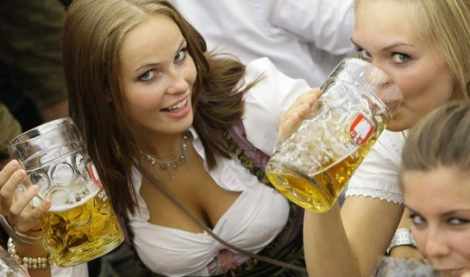 And not that frozen over-carbonated flavourless pisswater that you can buy a 30 rack of for $18.99 at town pump

I've got a keg of Quarry Brewing's Open Cab Copper on tap in my garage kegerator right now. My favourite Irish Red that I've tasted so far. After the Irish Red's, I'd have to go for an ESB. I've had a few good mixes of pale ale, hef and porter as well.

And a gripe: American Amber's that call themselves Red's. Rickard's - I'm calling you out.

It is fantastic, I had it at Beerfest in Vic. I just tried their salted caramel scotch ale, way to sweet for me. I'm excited to try the milk stout that Phillips is brewing soon.

Hoyne in Victoria is producing some great beers right now. The fresh hopped pale ale was one of the best I've had. Also the new owners of Moon Under Water are completely changed the lineup, and they are amazing!! I had the new wiezenbock yesterday, and it blew my mind!

I am a big fan of Cascadian Dark Ales. Skookum from Phillips is my top fav, not too over the top on the hops, and not too sweet on the malts.

Bridge Brewing's North Shore Black IPA is really good. Again not up front with a hop bomb but it's there in the back.

Driftwood Farmhand Saison. A little out of season it's right now, but I like it anyway.

I am a big fan of Cascadian Dark Ales. Skookum from Phillips is my top fav, not too over the top on the hops, and not too sweet on the malts.

Skookum is a fantastic blend for hops and malt lovers. One of my fav's.

As a home brewer I'm really out of touch with what's hot on the market place.

I do enjoy Green Flash IPA tho.

I had a Hoyne Dark Matter the other day and thought it was quite good.

You haven't lived until you stumble home on the sky train from Central City's Bourbon Oaked IPA. Only on tap at the brewery, maybe no longer available.

A fresh growler full of Phillips Green Reaper IPA. Nothing better. Too bad it is such a limited supply.

I had a Hoyne Dark Matter the other day and thought it was quite good.

I've heard good things about the Dark Matter, going to pick some up soon I hope.

Driftwood's Mad Bruin Sour Ale is really good IMO, although I like almost anything to do with bears so maybe I'm biased.

don't be so politically correct, this is stacy kohut, not fucking rick hansen your talkin too……..

I've been drinking this for a few weeks now. Smoothest stout I've ever had. Soo good.

Also if you haven't had the Espresso Stout down at Steamworks this year yet go try it out. Drink a couple of pints and then have someone tell you it's 11%. Be shocked and stumble out of the room.