Just for the record, that wasn't me. There's some crazy fans up here for sure though. But that guy might be the most unreasonable. I mean, come on, beat San Jose four straight? Not likely to happen. They couldn't beat them once this year, let alone four times.

Its fun to rile up some of the fans here though. lol.

I get into it with some friends that are fans and ask them why they can't score. "Its pretty hard to score goals when the refs won't let them". Whether there is validity to the shitty calls or not the simple fact is the team didn't put pucks into the net. The top line of Sedins and Burrows had 6 points in 4 games. Three players on the Sharks had 6 or more points in the 4 games. And where was the secondary scoring of Hansen and Higgins? Not a single point in 4 games.

Be interesting to see what happens between Blue/Kings. If it does go the distance and they continue to beat the snot out of each other will they have anything left in later rounds? What about facing either the ChiHawks, or Wings, who most likely won't be as physical but probably more skilled?

Kings probably have/had as good a chance as anyone in the last decade to repeat this year(lack of player lose, shortened season, short playoff run) don't think they will though

Bieksa: San Jose dives to much

Everybody else for the last 5 years of the Sedin Sister's garbage….: 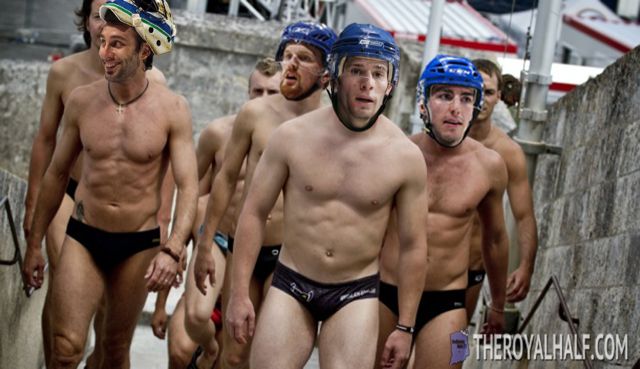 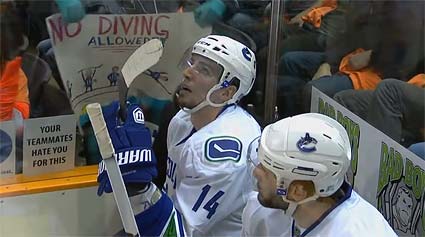 These playoffs are still an awesome watch. Islanders over Pens?! are you kidding me? Chicago is rolling but all the others series are worth watching. They score goals, its a nice change..

I didn't mean NSMB specifically but man around town in PG you should hear the people bitching.

It's a shame we're the only NHL fan base where this happens, ever.

Did anyone here think the Canucks were going all the way?

There is an enormous amount of judgment involved in the application of this rule by the Referees. The onus is on the player applying the check to ensure his opponent is not in a defenseless position and if so, he must avoid or minimize the contact. However, in determining whether such contact could have been avoided, the circumstances of the check, including whether the opponent put himself in a vulnerable position immediately prior to or simultaneously with the check or whether the check was unavoidable can be considered. This balance must be considered by the Referees when applying this rule.

It was a bullshit call and you know it was, especially in the playoffs, in OT, elimination game.

After what Hodgson went through with the Canucks, no one can fault him for being bitter at the team. Misdiagnosing an injury, forcing him to work through it and thenn basically calling him a pussy when he tries to fix it independently from the Canucks organization. I have had back pain before and I couldn't imagine a year or more of it, being forced to play hockey with it and then being ridiculed for seeking treatment when the pain just wouldn't go away.

I'm aware of this and wasnt trying to include it but thats the interesting point that lots of the "homer" fans fail to realize is he had a good reason to be the "cancer in the room" anyways. I talk to lots of local fans and the majority somehow think the Canucks doc's are the best in the known medical universe and no way could misdiagnose that. But hey, not like that happened to any other superstar like Crosby either eh?

It was a bullshit call and you know it was, especially in the playoffs, in OT, elimination game.

Maybe thats the real reason why the Canucks dont hit people. Regardless if they do, they end up in the box.

The Canucks simply dont have what it takes to play in the playoffs. At least not this year.

And that leaves one question:

Who does San Jose play in the Finals?

Guys, you have to realize that Daniel Sedin is a headhunter who looks to drop the hammer on every unsuspecting player he can! He's such an immense physical specimen that it is up to him to not hit such a defenceless innocent Wingels like that. Derek Roy too!

Ban all shoulder to shoulder hits!

Booth stays in your world? The guy is a bone waiting to break. $4.25m for a 4th liner is almost as bad as a $6m backup goalie and a $4.2m part time defenceman/winger/press box water boy

I agree he's overpaid, but he's been hurt and moving him won't happen.

that doesnt sound too bad actually. Raymond gone but same with Hansen, they both do the same thing with in consistent results. Skate fast.. sometimes get the puck.. score sometimes, fall sometimes..

I disagree about Hansen. He is one of the most consistent hard workers on the team and he's put up decent numbers this year. He never gives up (like catching Thorton on the breakaway last game), he plays with grit but he plays smart, and he does it game in and game out.

…because this. He's been the most consistent forward all year. He's not going to put up big numbers, but he does more for the team as a whole.

Hansen sets a good example for other young players and brings a lot to the table compared to his salary or his trade value.

Maybe thats the real reason why the Canucks dont hit people. Regardless if they do, they end up in the box.

The Canucks simply dont have what it takes to play in the playoffs. At least not this year.

And that leaves one question:

Who does San Jose play in the Finals?

I don't think the trend will continue this year. The Sharks routed the Canucks good and I wouldn't mind seeing them go deep this year, but they are not the solid defensive wall that the Kings were last year and they had the Canucks frustration, weak PK and plenty of opportunities to expose it. There is no way they are getting a 2.5 to 1 ratio on PPs next round. They also dive a lot and I think that will catch up to them when the refs turn on them. That little face off trick they do must piss the refs off too. When Torres knocked the puck out of the ref's hand I bet they all took note.

I agree he's overpaid, but he's been hurt and moving him won't happen.

Ugh, that would suck though…more money out and nothing in return?

Ugh, that would suck though…more money out and nothing in return?

not much different than what's happening now.

they need to reduce salary cap this year, can't have $8M not playing.