Outside of new bike day- what makes you move onto your next bike?

Tallboy to Rootdown due to broken frame.

Rootdown to stumpy for FS.

Stumpy to WILDCAT for modern geo.

Rootdown on the chopping block for being too short.

My roadie is ancient but has perfect fit and handling so it’s not going anywhere but it is getting updated with carbon wheels and finishing kit and a headset front end. “Gravel”, touring, or cross bike as we used to call em is a Cross-Check and Cross-Checks will do anything so it's not going anywhere. It’ll probably get discs eventually though.

XXL bikes were absolute garbage until just a few years ago. So for the last 30 years I've been switching bikes as often as something marginally better came along sometimes 1-3 times a year. As soon as correctly proportioned XLs and XXLs became available my bike switching slowed right now. The G1 is the best bike I've had maybe ever and after two great years there really isn't anywhere for me to go from here.

But that new Nicolai with the Lal drivetrain has sure piqued my interest. Nicolai-Geometron geometry, high pivot suspension and the first significant improvement to drivetrain technology since abandoning the front derailleur. I'm really curious to see how that drivetrain plays out in the real world. I always loved the idea of a gearbox but the Lal delivers all those benefits in a high-efficiency solution in a solution that I'd actually use.

The G1 and Nicolai Nucleon 16 are about the only frames I'd consider replacing my G16 Mojo with. Originally I was going to order a G16 Pinion but decided G16 Mojo. Have always had a soft spot for those ugly old Nicolais, HP bikes, and gearboxes. 😂

I just see N16 uses SuperBoost 157 rear end... But can fit a bidon in the front triangle.

While riding my hardtail on a technical downhill section, my foot got bounced off the pedal and when I dabbed, I fractured my tibia (fortunately minor!).

So now I'm thinking I want something with some proper damping in the back.

I'm looking at the Canyon Spectral AL or Spectral 125 AL, the hardtail lover in me is leaning towards the 125 but everyone says the Spectral 29 feels great for such a long travel bike. 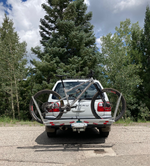 My next bikes will probably be minor revisions of what I currently have in the stable.

In the full-suspension realm I kinda want to try a tailor-made Nicolai G1 front triangle to replace my L Geometron G1 someday; I'd go a little taller on the headtube and seat tube, a little shorter reach, and a little steeper HA with a little taller BB (blasphemy I know).

If I ever need to replace my 2019 Santa Cruz Chamleon, I'd more or less want something similar in terms of geo except with a longer seat tube and in steel. I like the steep HA since it makes the bike feel fun/quick on flat stuff. I used to work for a fairly high-end custom steel framebuilder that makes MTBs (although is known more for road/gravel bikes), so I might see if he'd be willing to do something a little different from his production hardtails for me. Otherwise, maybe I'd phone up Paul at Rock Lobster to see if he'd want to build me something along those lines since I've always respected him as a builder and one day I'd love to have a bike of his.

While riding my hardtail on a technical downhill section, my foot got bounced off the pedal and when I dabbed, I fractured my tibia (fortunately minor!).

So now I'm thinking I want something with some proper damping in the back.

I'm looking at the Canyon Spectral AL or Spectral 125 AL, the hardtail lover in me is leaning towards the 125 but everyone says the Spectral 29 feels great for such a long travel bike.

Go through the checkout process to see actual delivered price before setting your heart on it. It's pretty shocking how much delivery is to Canada.

I think it will just be the swing of the pendulum.

Then Raaw Jibb - to try even more modern geo plus the ripmo was flexy.

The more modern things got, the less I liked them.

Now on Revel Rascal. I could not ask for anything more, **in this category of bike.

The reality is though, I know this bike can be undergunned on the shore when things get rough, fast and gnarly.

So I predict at some point I'll decide I want a monster truck, and then it will depend on if N+1 is an option.

At that point a dreadnought, kavenz, or similar will undoubtedly appear. Until I decide it sucks the fun out of normal trails and the pendulum swings back the other way. The circle of life. Lol.

I think it will just be the swing of the pendulum.

Would love to hear a comparison between the ripmo and rascal. One pedal better than the other? Rascal a lot less flex? One better on the downs? Or are they more similar than different?

The flex comparison is probably not very fair since it's aluminum ripmo vs carbon rascal. I doubt the carbon ripmo feels flexy. At 210lb I noticed the ripmo AF flex, though.

The Ripmo plows chunk better. Rascal is a more nimble, precise machine and I think it climbs better where it counts (tech climbing), good support and yet somehow a crazy ability to roll over square edges.

To me the rascal is just a nicer bike to ride.

If you ride mostly blacks on fromme/Seymour/squamish, rascal is awesome and really doesn't give up much in the descending department to the ripmo, and is way better everywhere else.

If you look for a pretty steady diet of double black gnar, Cypress, etc it ain't enough bike (occasional is ok if you aren't racing). Ripmo will be a little better.

But, I'd argue the ripmo is still probably not the right tool for the job in that case, you need something bigger for that anyways, so for me it's a somewhat odd bike. If you're buying a ripmo AF, just be done with it and buy a Meta am or an Aluminum spire. If you're buying a ripmo v2, buy a firebird or carbon spire. Climbing difference is minor, and you can smash stuff.

Thanks for the comparison :)

Re: hardtails, I’ve changed to go from hybrid->”real bike”->real bike with thru axles and modern spacing/geometry. Basically just major changes rather than specific features. Most recently was saved from the new frame bug by a -2 angleset that greatly improved the climbing and descending prowess of the bike.

Re: full-suspension I’ve mostly found myself swapping for pedaling performance reasons, since I’m pretty happy to ride my hardtail for everything but long-distance backcountry riding.

Went from a 2012 Cove G-spot (26") to a 2021 Marin Alpine Trail (29") due to wheel size, modern geometry, fear of cracking a 10 year old frame. After a year of use on the Marin, and for kicks getting back on the Cove for a couple rides, holy moly I can't stand it. Can't believe how far back on the bike I am for climbing, and how I did it for 10 years