Do we need to do hashtag ten years challenge to post in this thread?

How's this for combining 10 year challenge with the discussions of titanium!

2007 Litespeed Obed.  Basically what Litespeed built for Cove's Hummer, except mine is a freak with no head-tube gussets.

Picture at Galbraith from December, 2009: 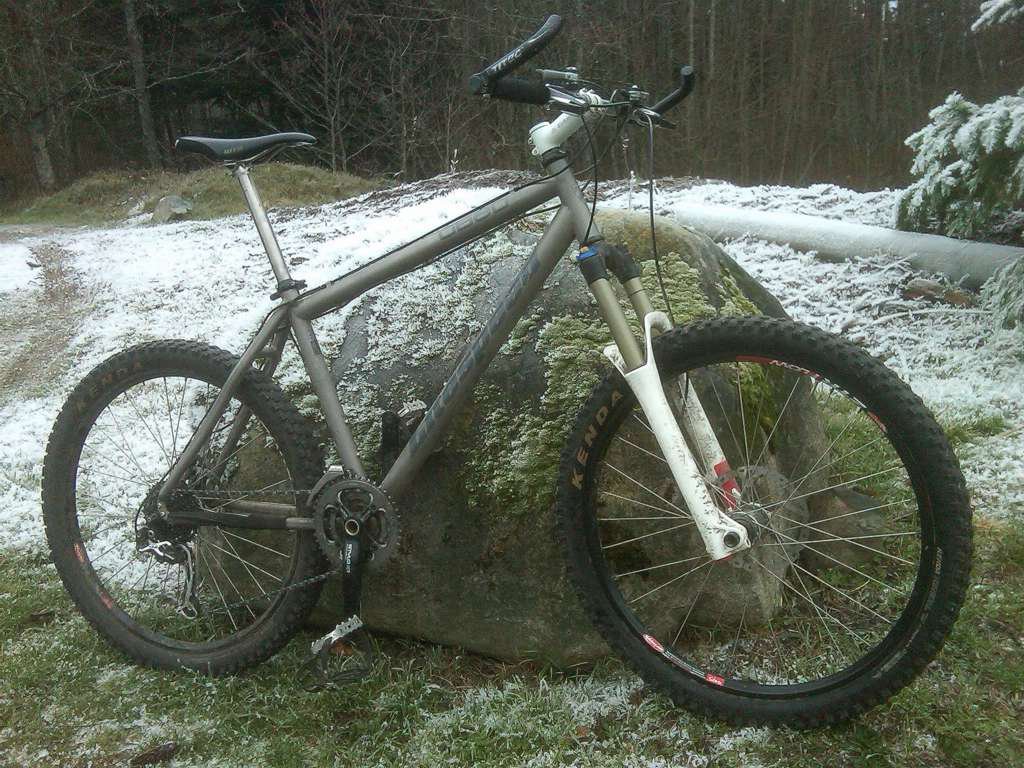 It's actually a pretty stiff for a Ti bike.  I feel like my steel Blizzard LT actually might have a little more spring to the rear triangle, but some of that sensation may be because of the plusher Ti-coil Marz 44 on the Bliz vs. the "sporty" Magura Thor air on the Obed.

Oh and yes, that Syncros Hardcore Ti post is still in service (Bivvy sack poles actually tuck perfectly inside it)

Here’s my Pässilä Bicycles Rämäkkä titanium hardtail. I use it for everything from long rides to enduro racing. Proper modern geometry and titanium frame: match made in hardtail heaven! 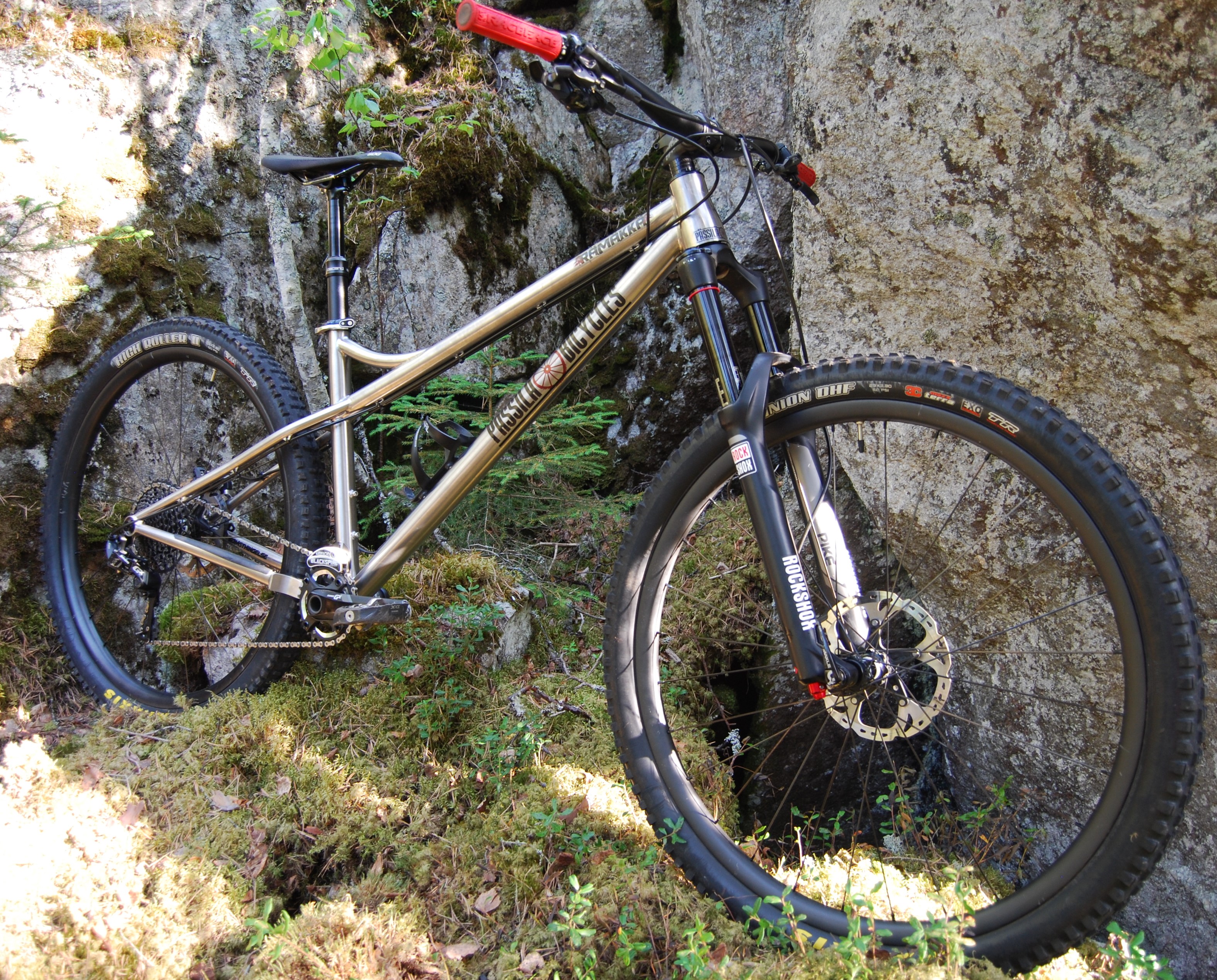 First ride on the 2019 rootdown this weekend. Super fun. Yes the fork needs to not be quite so... green... lol 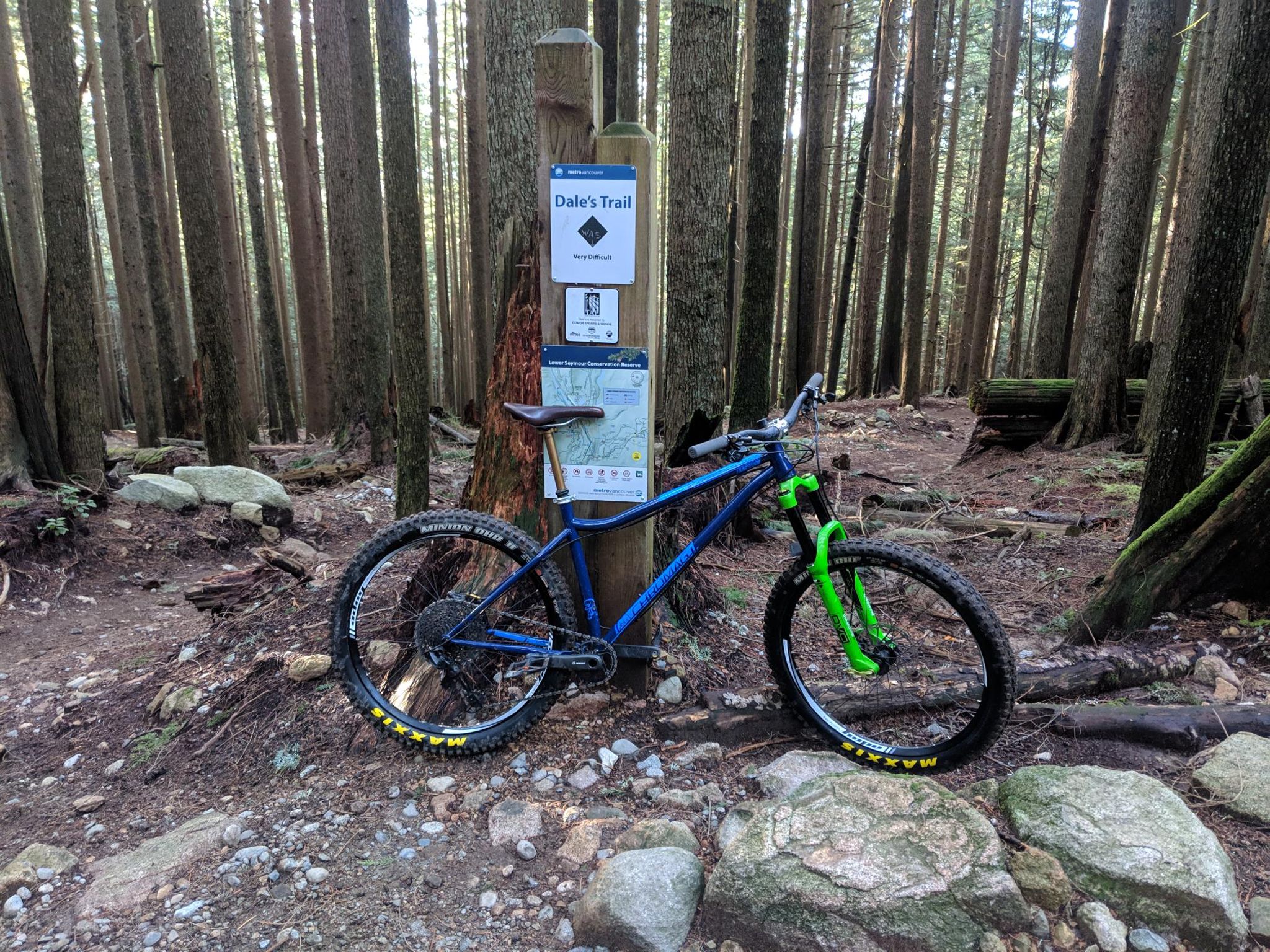 Just get green grips, saddle and pedals to match. 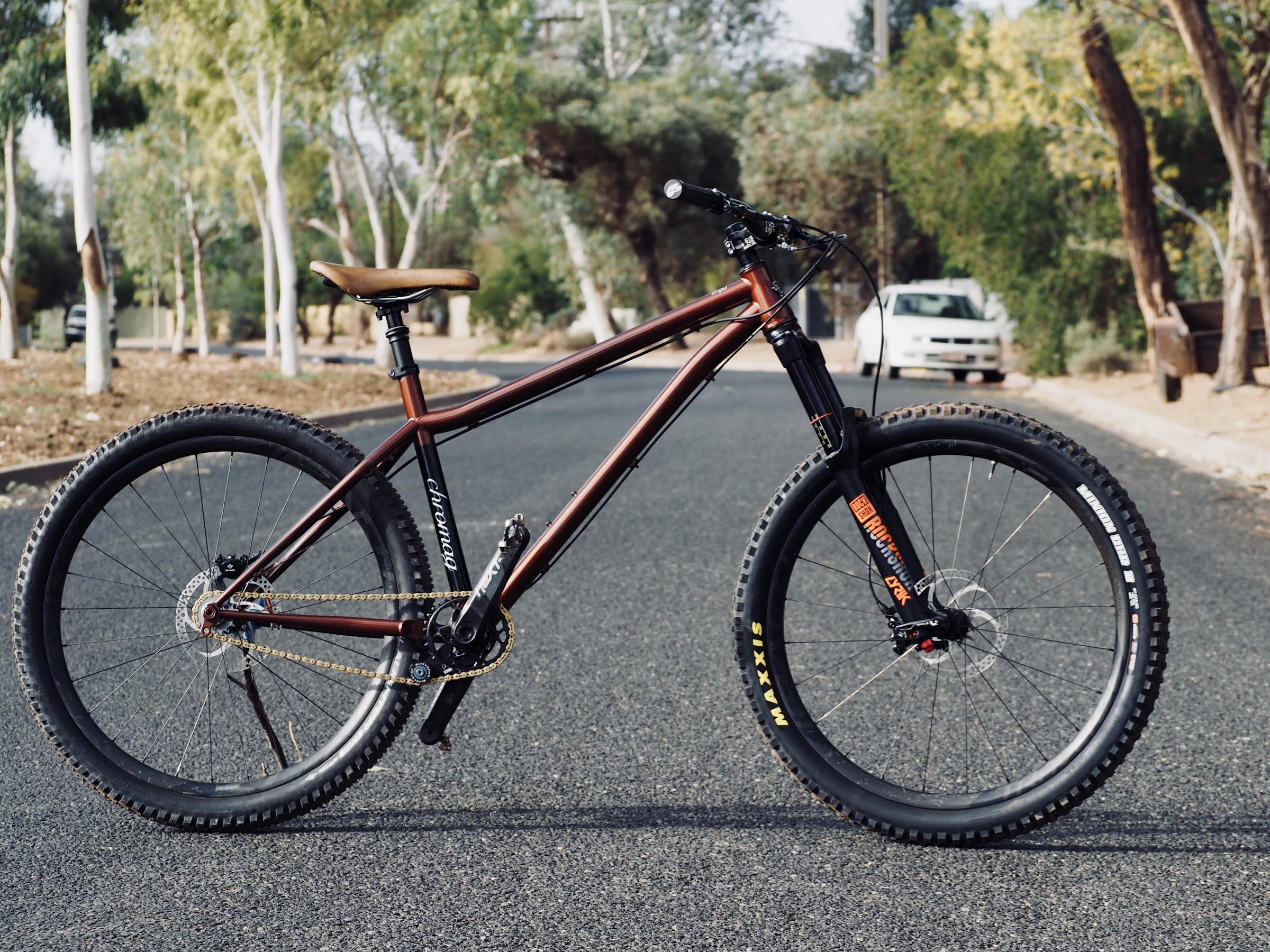 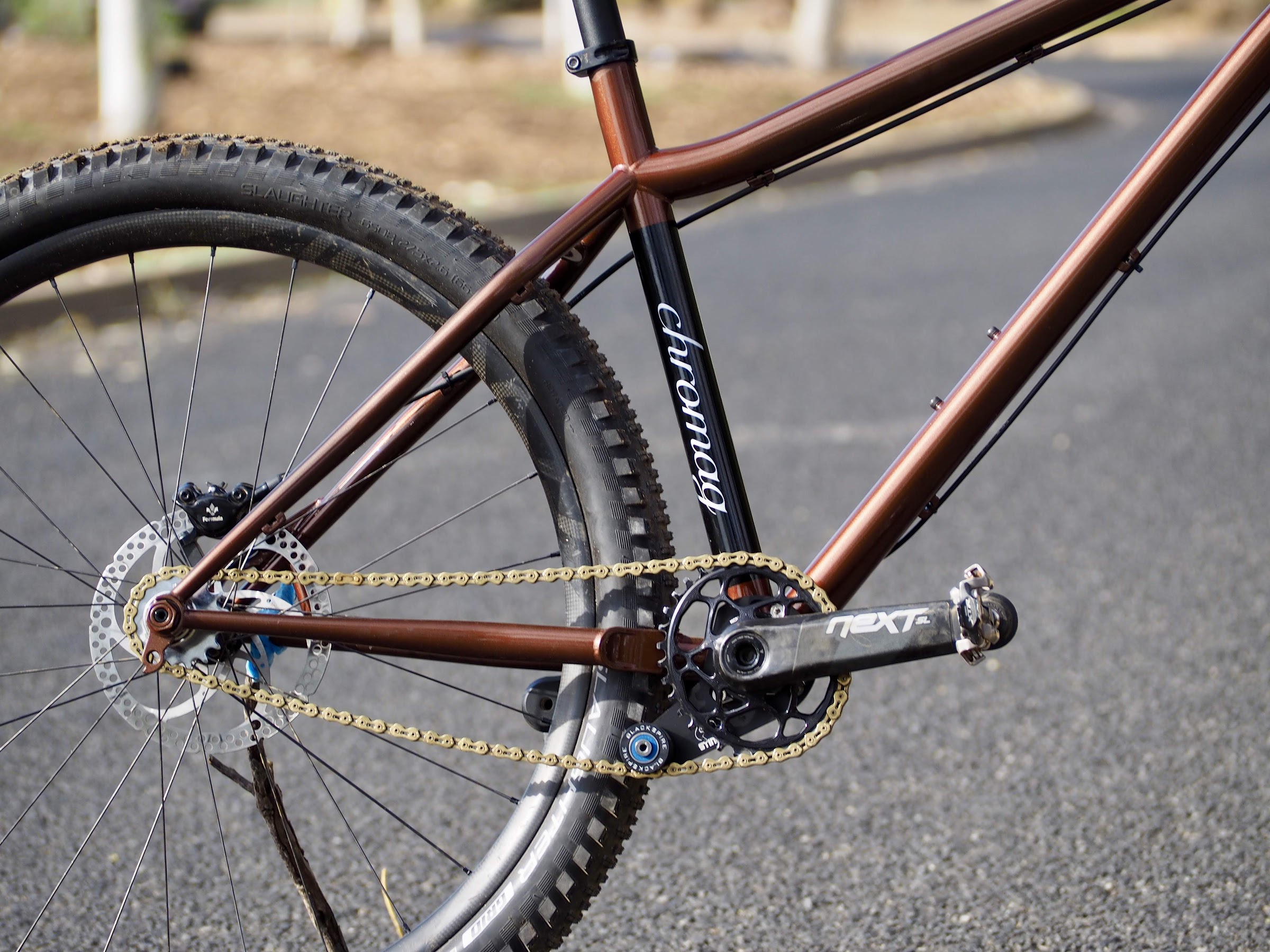 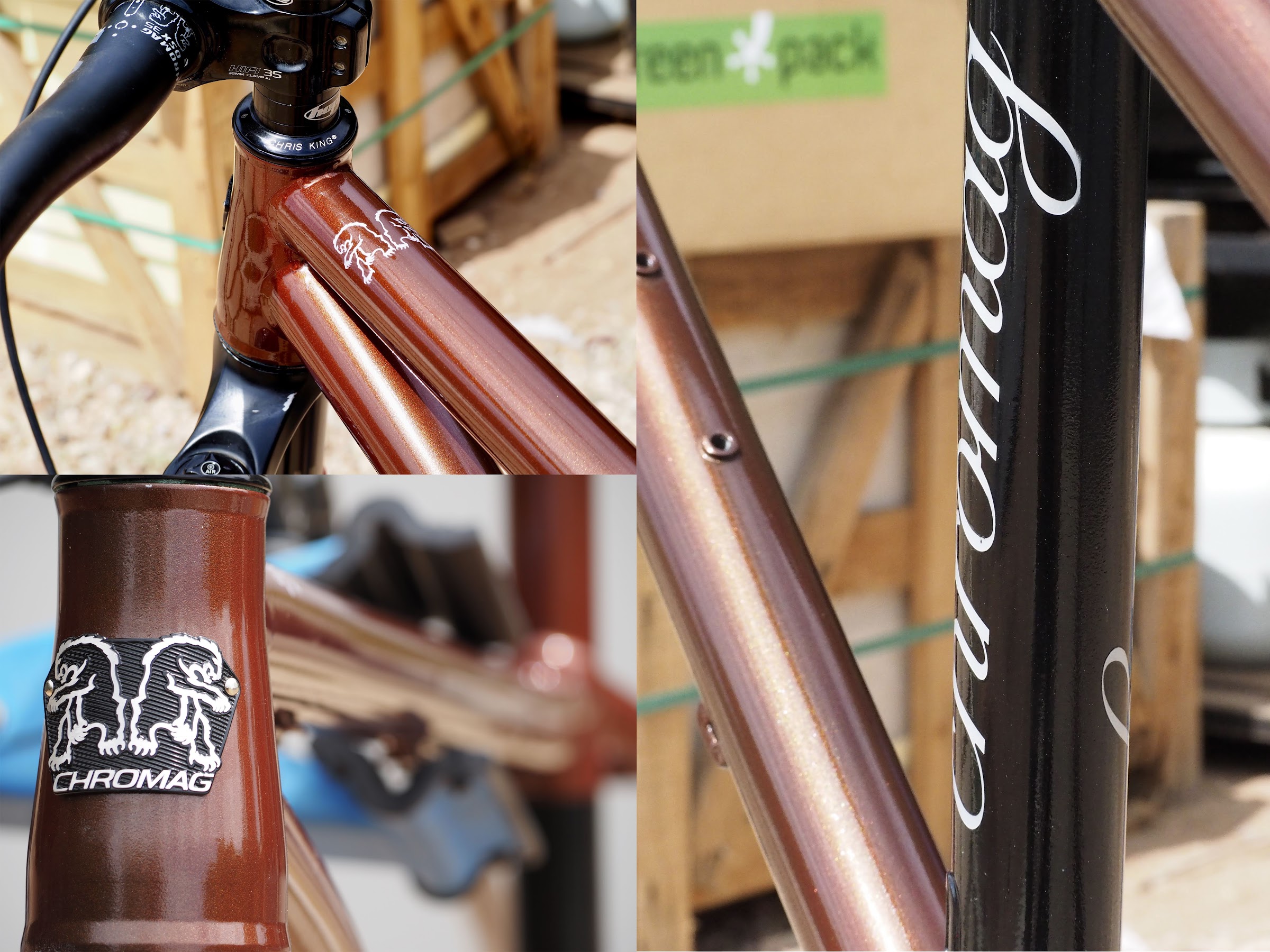 Yea, I know that the chain tensioner is upside down (and the chain a bit loose) but it seems to be the only way to make it work with the oval ring. Options are: A round ring, a rear derailer style tensioner, or just to keep pedaling..... even if it makes your eyes bleed!

So the story behind her is that a mate was trying to sell a Stylus frame and fork combo. I took it for a test ride and promptly laid it down in a rock garden, putting a series of toonie sized dents in the top tube!

Before he knew what had happened my money was in his bank account and the frame was at a panel beater. This guy normally does custom cars and Harleys so he did an awesome job with the dents. He then laid a fine coat of pearlescent, metallic rootbeer over the evidence. The logos are painted on in pearl white too.

I’ve swapped out the orange fork decals for black since the photo too.

About 7 years ago I got to spend 12 months in BC and 6 on the shore. I was always blown away by the locals laying waste to the scariest trails that I’ve ever seen on these crazy hardtails.

So I was always going to have a Chromag of my own. It didn’t happen quite the way I planned, but it did finally happen!

some incredible bikes. that repaired Chromag is a stunner, what a crazy story.  super high marks for the bizarre Finnish ti hardtail and extra points for the sheer number of dots in the name.

Thanks! Every dot counts. 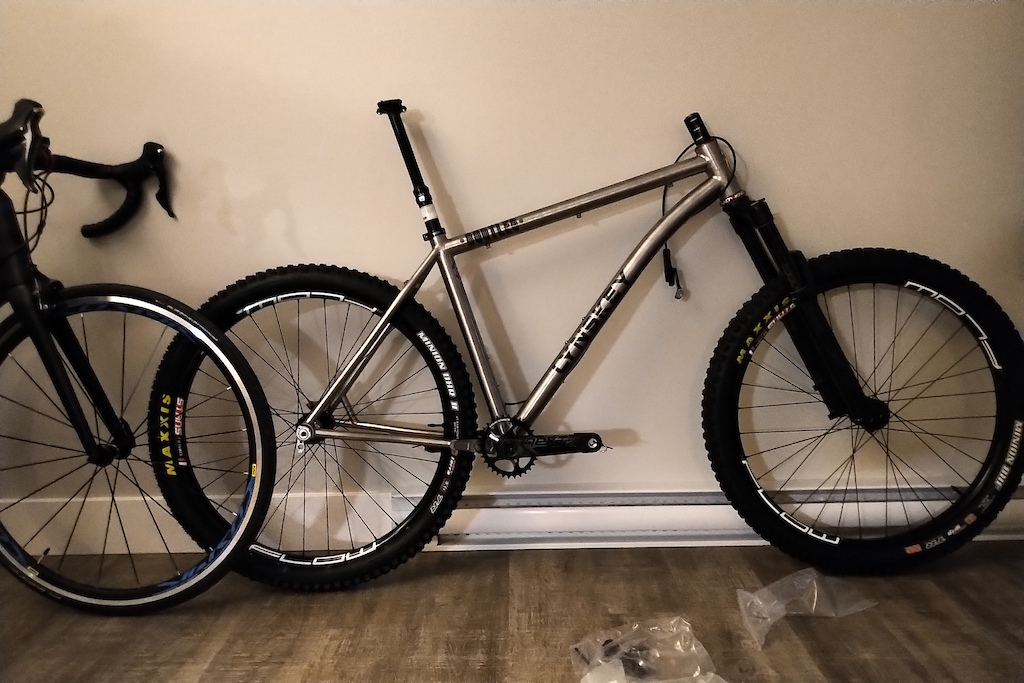 Owning a Chromag Surface Ti myself I can see the same factory made the Ti as the Finnish bike.  The head tube is identical, and considering how expensive Ti is I can see why.  I have had my Chromag for 8 months now and could not be happier with the purchase.  No, I cannot go down the gnarliest trails I can do, but the ride quality and satisfaction are second to none.  Worth it all for sure.

That Chromag Rootdown and Stylus are two beauties. Oh my god.

Which Lynskey frame is that?  Thanks!

Hope 35W wheels? Don't suppose there's a chance you could do me a small favour and measure those 2.8's lug to lug and the highest point of the tire measured from the rear axle for me? ;)

Lug to lug is with calipers so that is pretty accurate. The 365mm could be plus or minus a few mm as it's a little tough to measure. Tire is at 18psi.

Which Lynskey frame is that?  Thanks!

Should have the rest of the build ready to go by next week.

Here is my current set up: