The Following is the top contender to replace my aging and 'obsolete' Chilcotin. I just can't swing paying both the exchange rate and duty on getting a frame or complete build up here.

If you look at the sales tab on their website, it says 'We are currently developing our consumer direct website and dealer locator. We hope to have it launched in the next six weeks or so'. This has been up at least since when i started looking into a Following last fall……back when i contacted Chip at Evil and he said he would do a 1 to 1 dollar exchange on a build for me….doh! Didn't pull the trigger then, and they won't do that now because of how shitty our dollar has become since. Too bad, really want a new bike within the next month or so.

The frame would be duty free. It's only subject to 5% gst which you would pay on any locally purchased frame new from a shop anyways You're going to love this thing. The Insurgent has been an amazing rip so far or I'd likely be putting the call in for a wreckoning aka _the megladon. _

heres mine, 2016 Devinci Troy RS. Pretty ho-hum build compared to most (no $2k carbon wheels, mostly stock parts, boring GX drivetrain etc etc). I'll add a dropper post, new pedals and a few other upgrades when more snow starts to melt and more trails start to open up and my priorities shift from sliding on snow to biking.

Craw, put up some deets or maybe a separate thread about the new rig, that's an especially unique bike. how does it compare to the E29 so far? you would probably be one of few in a position to comment with any authority on bikes in this niche.

Direct sales is the way to go. Avoid Canadian distribution at all costs.

With the value of our dollar that isn't necessarily an advantage.

I plugged my nose when I got my 2016 Processes when it came to the talked about weight, coming from carbon bikes for years (Ibis, yeti, SC). Until I weighed my 153 with the components swapped over from my Nomad. 0.75lb heavier, BFD. The 2016's lost a fair bit of weight with a new seat tube and chain stay situation.

…and a 140 Pike on the 111 kicks ass. Still not miles behind the new guys. The internets might care about the Process being washed up. So how much are the new Carbon wonder frames costing now? I bought two frames and a fork for the price on a new carbon wonder sled. That evil is a wonderful looking bike. I really want to have a spin on the Following!

I think they ride well and are really fun and capable. I'm a decently quick rider, but unlike a couple guys here I don't have sensors in my ass and a tape measure in my pocket :nerd:

With the value of our dollar that isn't necessarily an advantage.

True, but it depends on how grey the market is that you want utilize in order to pay better prices than a distributor. :shiftyeyes:

Since most of the build went to the 111, I'm going to backfill the 153 with some new XT brakes, and my old XTR 10spd. It might actually end up lighter. The XT cassette is like a block of coal:)

Edit: 2016 Process 153 frame size large is 7.65lb on the scale, with monarch plus and axle. I don't recall -exactly- what the XL Nomad frame was, but from what I remember it was just over 7lbs with Monarch, on the same scale. So meh…

I'm going to be putting an older kona Satori together. I sized up a frame size to the 19", which geometry wise will be virtually identical to my medium Honzo aside from a bit longer rear end at 440mm. It'll basically be a process 111 with 20mm extra travel, 10mm longer chainstay, FD compatibility, and less stand over clearance. And an extra grand in my wallet.

She'll share the wagon wheels from my honzo for now and if this 27.5+ thing is legit and sticks around I may play around with a set, leaving me with 4 bikes for the price of 2.

I'll just put this here and walk away very fast…. 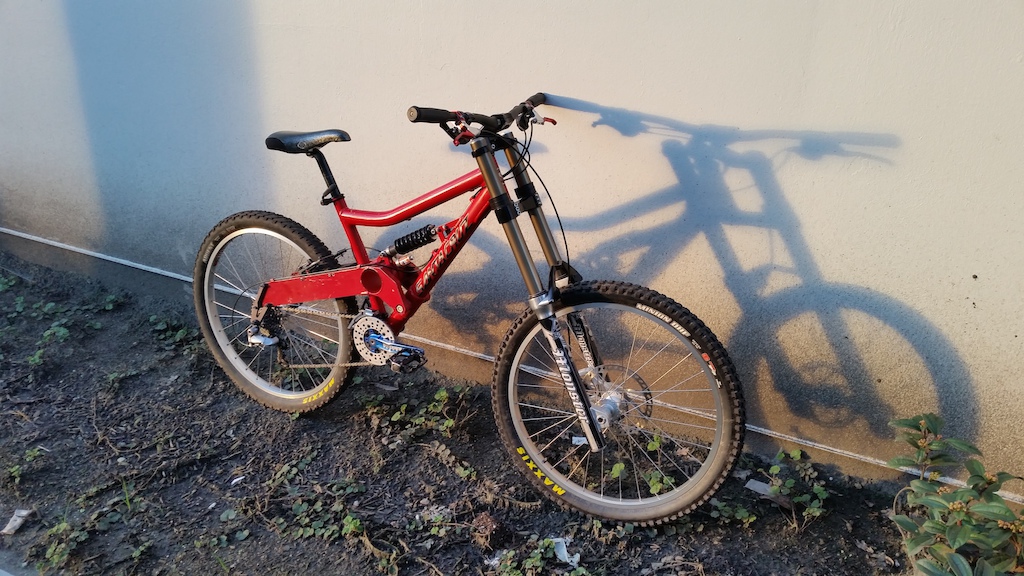 Nice! Good thing that bash guard is drilled out to offset the weight of the rest of the bike.

heres mine, 2016 Devinci Troy RS. Pretty ho-hum build compared to most (no $2k carbon wheels, mostly stock parts, boring GX drivetrain etc etc). I'll add a dropper post, new pedals and a few other upgrades when more snow starts to melt and more trails start to open up and my priorities shift from sliding on snow to biking.

You should keep the pedals until absolutely every last bit of anodizing is worn off. So close!
Looks like a bike I'd like to throw a leg over. Love that utilitarian battle worn look.

spank oozy pedal when available through the local shop

while your sitten at your desk im banging laps.

Nice bike. I run a bottle cage on mine on the mounts under the downtube. Other than looking goofy, it works fine.

Nice bike. I run a bottle cage on mine on the mounts under the downtube. Other than looking goofy, it works fine.

as do I and I am always cleaning out the mouth piece on my Podium bottles , they love to fill up with dirt and crap .