For me that vague sensation is a constant reminder that i'm not leaning the bike properly, and i should be pushing harder. I found that riding tires with those intermediate knobs (Magic Mary, Assguy) made me corner like a little bitch cos i didn't need to push hard to get the traction. I've been running DHF front and rear on all my bikes for the past 3 or 4 years now once i figured this out.

Maybe on flow trails, but in technical trails or off camber landings the angle of my tire relative to the trail surface is not something I'm really in control of.

Hmm to me its more apparent on tech trails, and especially flat corners. I'm whistler based so things like Howler, all the Blackcomb trails, thats where it becomes more and more noticeable.

Yeah I agree, I think we're saying the same thing - on tech trails it's a problem because it's not just a manicured berm where you're under control of what part of the tire is in contact with the trail.

I crashed again yesterday. 2 crashes in two rides due to wierd washouts with that damned DHF.

Swapped an assegai in this morning. Even just visually it feels much less sketchy.

Maybe I just don't have the skill for a front tire with no transition knobs, but never again...

Yup, the DHF needs to be leaned over. Just get your body low to the bar and lean it in. It will hook up. Thats the great part. If you trust it, and ride it hard, it will deliver. Haven't tried an Assegi but I hear they are slow rolling but super tractionous (is that a word?).

Again I get that in a flow trail type scenario but I don't see how getting low to the bar and leaning the bike over helps on a trail like lower Dale's. When coming around and down half rock/half mud/half root jank festivals, the tires just need to grip however they can, to whatever surface is available, at whatever angle it presents itself.

Maybe some people can tip their bike side to side through stuff like that to get their various tire knobs to the right spots, but I don't have the skill.

I rode a DHR2 front and Dissector rear last summer, both in 29x2.4 Exo Maxx Terra. I tried the combo as a sort of North Shore and Sea to Sky “XC” tire setup (obv not real, lycra xc). I thought the combo was awesome (a) as long as the trails were fairly dry (so for summer it was awesome) (b) but only until the Dissector side knobs undercut super duper prematurely (like 10 to 15 rides). I’m admittedly in the “DHR2 is an awesome all around front tire” camp. I find it’s a great balance of weight, grip, braking traction and rolling speed. I thought the Dissector was really fun to ride too, in a kind of loose and fast sort of way, until the side knobs gave out. That was a bummer though. Strangely I also rode a Dissector in Exo+ in 29x2.6 Maxx Terra on my hard tail for a while last year, which was similarly awesome as a fast but grippy enough rear tire and didn’t have the same early knob failure.

in the summer i went from a minion SS to an aggressor and appreciated the better braking and traction. th elower profile side knobs were definitely noticeable though. I wouldn't want it in the wet but in the dry it was a pretty fun rear tire.

The Dissector/undercut knobs issue could be because there's such a pronounced channel between the centre blocks and the side knobs - I think it's even proportionally wider than a DHF. Kind of when you're on the side knobs, they're out there all alone doing their thing with no help from the main tread.

Would you guys replace this front tire yet? 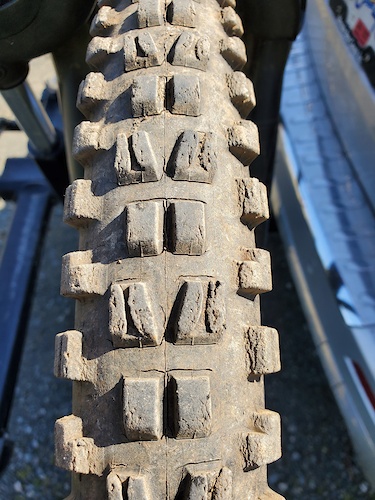 Would you guys replace this front tire yet?

2. Put on classifieds for free and give to local kid

i would have a new one on the way

A tire's not worn out untill you can see the threads.

As a front, its done - as a rear, its just getting started.