this bike looks amazing on paper (and in the LBS), i would love to demo one. it sounds like an ideal mid ground between all out enduro race bike and lighter duty trail bike. any inmates have one and care to share any love or not so love about it?

I checked out and quickly test rode the Django a couple Fridays back on my trip to Galbraith . Ran into Devinci Rep and enduro ace Matt Slaven , he was showing a shop guy his personal bikes and I got the opportunity to check them out as well . Matt had 2 Django,s one aluminum 29" with a 140mm Fox36 and a carbon 27.5" with a 150mm Fox 36 . The carbon model used a lower headset spacer to change the geo on the bike as well .

This bike really peaked my interest as I am stepping towards a 29" bike and seeing how Matt built his up shows me I am looking at the right model and direction . Be very cool if they did a 29" Troy , I think it would do well out here .

The Sparton is getting some changes but I am not going to start a rumor on something I can not confirm . But from what I have seen in person and been told this company is one to watch for .

I want one of the 2016/2017 badly, friends on the older (less stiff) 2014/15 love theirs for all around riding. The orange/red 2016 XT build is sweet, someone is selling one in Pemberton but I've already mentally committed to a new DH bike first.

Its a great bike, did everything I asked of it, pedalled great, active suspension, just swapped it for a transition patrol as i'm down to one bike and wanted something a little bigger, hence I will soon have a 2014 carbon troy, medium with new wheels off the transition, once I get the pike back from being serviced.

I've had a 2016 devinci troy since last spring, I don't know if that's the "new" model you're talking about or not - havent been on nsmb or bothered checking what the bike industry is pumping as the latest or greatest for the past 6 months.

got out for maybe 30-40 rides on it so far but mostly on shorter rides as life has been too busy to care about bikes for the past while. General impressions are great, it's a great climber and even better descender. I've been on short travel bikes for a long time and the latest version of devinci's split pivot doesn't dissapoint. There's very little pedal feedback and great traction when climbing but I've never once felt like I wanted more travel on the way back down. once and a while I find the wheelbase (or maybe it's the 650b vs 26" wheels I rode for 20 years) a bit slow steering and boring but I think that's just how bikes are supposed to ride these days to give us a bigger margin of error, from everything I've read online that's often a complaint when people talk about the low/long/slack geometry that nearly every bike is sporting now. Maybe less so in the past year or two but much more so when everyone started switching to bigger wheels and new geometry (I'm just slow to the party, that's all).

The only improvements Id like to see (in my personal opinion) would be a 160mm fork up front - the 150mm pike is good and feels great in almost every situation on the trail but if you really stuff the front end into a sharp rock slab or awkward corner it can feel a bit unbalanced because the rear suspension is so smooth by comparison. But I like to ride short travel bikes like a dh bike so my expectations are different than some people who buy a trail bike to ride on…trails, ymmv. I plan to change the travel on mine when I have time and see how it feels.

The BB feels a bit low to me but that could be riding style/location dependent. We have rocky old school trails here and I like to stand and sprint on the pedals as much as possible so I find myself clipping pedals more often than I'd like and the long wheelbase means I've smashed my chainring a few times more than I used to as well. I'm glad the days of steep ladder ramps are behind us because a bike like this would get hung up on everything.

lastly, I really don't like the 1x system on a capable trail bike like this but that's old news and only my opinion so don't sweat it too much. The stock 30t ring is ok for climbing just about everything here but I really miss having a usable range of high gearing on the way down and I don't feel I could go bigger on the chainring without sacrificing climbing ability. Most of the time on anything resembling a wide open high speed trail I'm in the smallest or second smallest cog out back and spinning out when I try to sprint. Everyone says you just need to "pump and coast" down the trail more but that's a really fucking boring, watered down way to ride a bike if you ask me and makes me wonder if it's why I haven't made more time to ride this bike since I picked it up. Riding bikes is more fun when you can hammer and sprint and ride on the ragged edge of control, or at least have the option to ride that way if you want to :lol:

so there's my mini review, shoot me a pm if you have more specific questions.

I'm on the alloy RS model with a stock build and it weighs around 33lb..heavy generic wheels, tubes, house brand parts etc but I don't feel the weight difference between this and my old Dixon much which had very light wheels, tubeless and a much nicer build. I don't plan to buy another bike any time soon so as things wear and break I'll upgrade it to make it a bit lighter but I feel the stiffness and lifetime warranty on the frame are worth the weight penalty of only 1-2lbs compared to much less robust frames. With the boost rear end the tracking is fantastic and after re-tensioning the wheels after the first dozen rides Im even happier.

The 1x is just a personal gripe - I just don't like anything about it (except how quiet the bike is). Poor chainlinr, accelerated wear, thinner/less durable chains, cost and incompatibility of replacement parts, needing to buy aftermarket drivers, chain rings and derailleur cages to "fix" a problem that never really existed with a front mech all seems like a bad trade off but I've never been one to move with the times so that should all be taken with a grain of salt.

Bottom line is that the bike and frame checks nearly every box you might want for a shorter travel trail bike that can take a beating and hold its own on rowdy trails where longer travel, but slower climbing and steering Enduro bikes would normally be seen. A true mountain bike IMO if you dial the build to your liking. MSRP on the frame alone is quite fantastic as well considering you get something hand built in Canada (on the alloy model anyways).

I'm considering one of the 2017s.
How are you liking you troys.
No changes from 2016 except colour, and build kits.
I have a couple of concerns.
At 5'8" I'm on the low side height wise of a Medium. The reach is considerably longer (at 440mm medium) than my spitfire which I thought was long at 427mm. Anyone else on the low side of a size. Do you still feel centered. Any problem weighting the front in turns.
Looking at gear ratios, I may have to go to a 28 tooth ring as I'm old, fat, slow. Is there much pedal feedback.
http://www.devinci.com/bikes/bike_799_scategory_189

Best thing to do is take it for a spin if you can. I'm 5'9" but with short legs. I vary between a small and a medium. I bought one of the new Reign's a couple of years ago and it's the most comfortable I have felt on a medium in a long time. That said, stand over rather than reach tends to be my biggest issue.

For sure. No demos available for another month or so.

…
Looking at gear ratios, I may have to go to a 28 tooth ring as I'm old, fat, slow. Is there much pedal feedback.

Science! I believe that's the first time I've seen someone say they've looked at the gear ratios to determine their chainring size. Usually the number is arrived at solely using the endurobro scale. You sir are a rational human being, and correct, 28t is what you'll need to maintain a familiar climbing gear ratio.

I demo'd a '16 Troy on some downhill trails in California this summer. Loved my brief time on it. Seemed like a very good "all around" kind of bike. It's funny hearing that it's low and long, compared to my lowrider sled of a Reign I was thinking that it was stubby and tall till I got used to it :lol: It's all relative I suppose.

Remember too that you can fudge the size by stem length choice and handlebar sweep (and width). I figure about 25mm'ish in reach either way by using a 35mm or 50mm stem and a straightish bar or a bar with more sweep.

.
Was talkin' to a guy with one of those split pivot Devinci's said had brake jack like 4 bar w/o Horst. Don't know how that would relate to pedal feedback though.
No shame in 28t. I'm runnin' 26.:o

Just found this. Looks like a lot of pedal feedback. The smaller ring you have the more it applies. Not good. 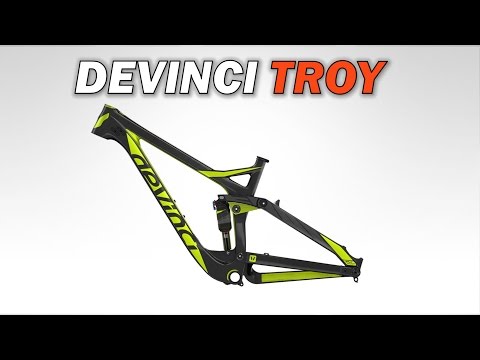