one of the og breezers on display at interbike 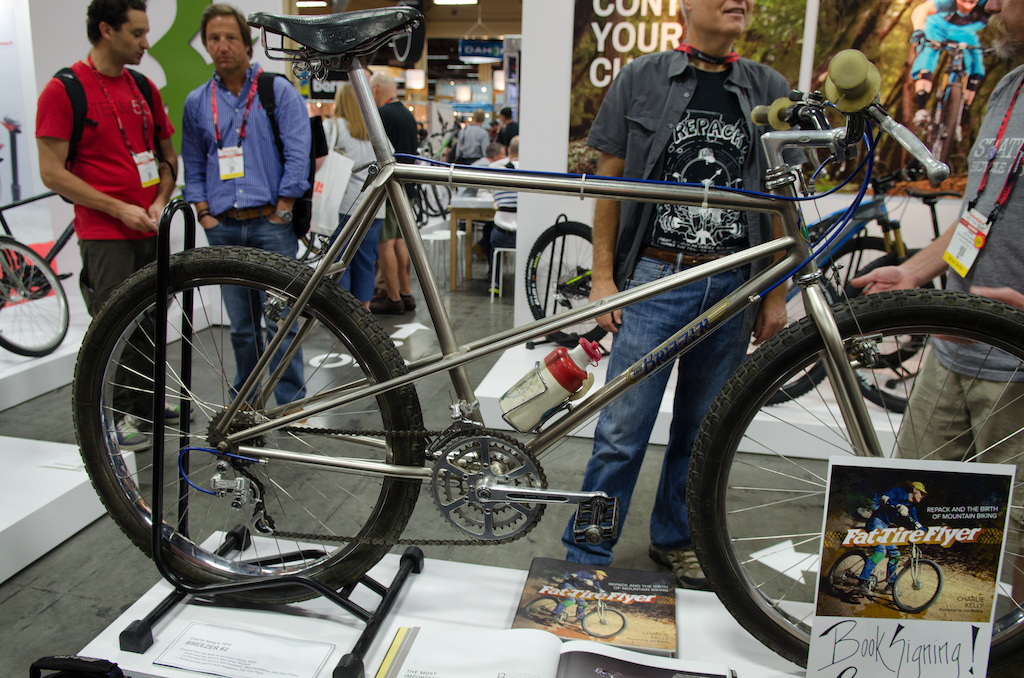 I should have taken a picture but I ran into a fellow on a Ritchey from the early 80's the other night in the Dunbar area. Recently repainted red. Thomaselli levers, Phil Wood hubs all original stuff he said.

Look who's on pinkbike: http://www.pinkbike.com/u/repackrider/

Look who's on pinkbike: http://www.pinkbike.com/u/repackrider/

He also posts on mtbr.

a lapierre porteur bike, mostly complete. jan heine and matthew grim ressucitated awareness of and interest in these about 7 years ago, and bike nerds have since been trying to make their own, or in some cases have custom ones made… but this is the first original porteur i've ever seen: a 1950's french newspaper delivery bike, meant to handle well (look ma, no hands!) with 40lbs of paper strapped to a front rack, and the origin of 650b wheels. excited to get this thing back up and running :)

looks clean for its age

OOoh. Nearly bought one of these a long time ago. Was it the Spooky Darkside? Not sure of that. Bought a Cove Stiffee instead. I remember the seatube easton decal said "Easton FS" tubing, as if they could only imagine people using that tubeset for Full Sus bikes.

It's all the love for Frank The Welder (Wadleton). IMO they did a good job of being an East Coast version of Cove Bikes, obviously without the actual shop.

I worked at a Spooky dealer BITD, and they built up into nice bikes. They had good distribution and support in the UK which made a difference for sure.

At one point one of their ads suggested that you could run over the back end of their Metalhead dirt jump/4x bike with a Hummer (back when Hummers were Arnie cool not Costco grocery getters). We had a customer who was super keen on this and wanted us to test it out. He came up with the idea that someone could stand on the back end of a frame and it should be fine. He was a big lad well over 200Lbs, so we weren't too keen on it being him.

We called up the Spooky dist and got the go ahead despite our major misgivings.
The lightest shop rat is pressed into duty - all of 110Lbs - and he works his way out to the dropouts after starting at the seat tube with the frame laying on the floor.
Amazingly it's all good. He makes it to the dropout and the frame is still fine. Until he flexes his foot a little like he's raising himself up on the balls of his feet, and as he relaxes the frame bends writing it off.

Apparently for some reason they thought that we'd put a wheel in the dropouts - what would be point of that? We got a new frame from the distributor, but we never got anyone to stand on it ever again.

TL;DR I worked at a place that sold Spooky bikes.

Added this one to my collection - Pretty much stock 1983 Stumpjumper Sport. Picked it up from the original owner who purchased it in Edmonton in 1984.