Any 26 Plus Riders Out There?

Looking at building up a new hardtail and I am flirting with the idea of 26+. Anyone have any experience with 26+? What rims and tires work good?
I am sure with that much girth on the ground you can get away with a less agressive tire, but my main worry is rims. The only ones I can fine are the Stans Flow MK3, the WTB Scrapper and Velocity Dually.

The issue is mostly the frame availability.

I've been waiting for Jamis to finally release the Eden & Dragonfly for the other half, to no avail.   I think she could benefit from the "easy button" traction and rollover that 2.8-3" tires provide, but She is small so 27.5+ is just too much I think.

I spent a good amount of time on my 26+ converted Turner Six-Pack this winter.  2.75 Surly Dirt Wizards (the folding, higher TPI version) on Flow MK3s.

The build was actually somewhat inspired by a Jamis demo day where I got to swap back and forth with a buddy between the Dragon Slayer 27.5x3.0 and Roughneck 26x4.5 on dirt.  The + bike still felt like a bike to me, but the fattie was a little too bizarre for "normal" (non-snow/sand) use.

I've forgotten what kind of tire pressures I was running--maybe 18-20psi?  I found the setup to be good in 3" or less of snow, but when it started drifting to 5" and getting more powdery, I struggled.  I was disappointed with the performance of the Dirt Wizards on wet rock slabs.  I don't think the extra volume was enough to make up for the rubber compound probably being harder than Conti Black Chili (Dirt Wizards replaced 2.5 Der Kaisers).  I probably wasn't being as brave with dropping my tire pressures as I needed to be.

6+" of coil-sprung travel with 2.75 tires makes for a hilariously inefficient bike--probably quite a bit different than what you'd experience on a hardtail.  I haven't been out on it since the snow disappeared off the local hills, but I was looking at it last week and thinking I should take it out for a rumble in the dry...

I lied!  Jamie does have their 26+ out now, and at a reasonable price too!

I just wonder if they got over those frame cracking issues... 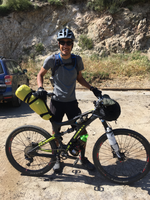 You could, but you'd lower the BB a bit and decrease the wheelbase slightly...

Thanks, It sounds like it would have the same drawbacks of using 27+ tires on a 29er frame. Do you think this will catch on the same way as 27+ has or will this be pretty niche?

Well, you're going to find yourself pretty hard up if you want a nice 26" right now.

I have no issue with more choices, but if people keep thinking something additional "new" makes that last thing "outdated" as apposed to just different as they should, then the other "outdated" option will dry up.

Have We Finally Run Out of Wheel Sizes to Try?