I've had a lot of steel frames including one I used for many months [over few trips] beach camping in the Baja and when home riding around Calgary in the winter [ie. road salt]. That steel bike developed some cosmetic surface rust because I was too lazy to rinse it off with fresh water after extensive salt exposure. The rust was minor and had no effect on the bike. I eventually re-powercoated that frame and sand blasted that rust off. It looked like new again.

For my steel frames that have seen "normal" use in Calgary and on Van Isle I have not had any rust issues at all. I don't do anything special to the bikes other than store them in a garage out of the elements and I don't hose them down. I do use a rear fender which avoids spraying water into the seattube....which I think helps.

If you are particularly worried about a steel frame you can treat the inside of the tubes with rustproofing spray and the outside with a protective spray. I don't bother.

Currently my oldest steel frame is 9 years old and gets used in the rain a fair bit. It has no rust issues and I expect it'll be going strong another couple decades.

Agree.  Though I would add also if it is a steel frame be aware of where you live as some areas use brine on the roads in winter. And from what have been told it more then halves the lives of the trucks they use to spread it on roads before winter storms. If you live in an area that uses Brine and/or absolutely loves to use as much road salt as possible in winter. might want to spray the inside of the frame.

20 years of riding in Ontario where they love salt and most damage to date has been two rimes where it ate the eyelet and finally that spot failed. Only other thing to be wary of is increase the frequency of checking bolts and re-greasing them.

If you do want to treat your steel frame, Boeshield is actually great for the application (great for your chain & inside your frame). I do it when a frame is new and then spray in a bit any time I have the fork out or BB out.

The Murmur does seem like a timeless bike to hold on to for a very long time. Any concerns about rust with the steel frame?

No real concerns about rust.  It's one of the Taiwanese made ones which I believe was coated with rust inhibitor (From Starling www - Our swingarms are full Electroless Nickel plated, this is a full internal and external rust protection. Rust should not be an issue with these frames ).

IIRC Surly do the same to their frames and I've had my Krampus 8 years now and there are a few spots of rust on the TT where i've knocked the paint off and sweat on it.  I need to clean it off and put a little zinc oxide paint on it.

I re-sprayed the Murmur earlier this year and it seemed fine rust wise however will probably spray some rust inhibitor inside next time I re-spray / rebuild.

another BORN bottle in the top tube bag, two 1 L bladders in the frame bag, 2 L bladder in the pack, and 1 L pot in the seatbag (but it will be used for food), plus tablets and a steri-pen

That all makes more sense.

The homemade gear all looks great, and bonus points for the full Canadian theme colour matching.

With the cancellation of the old Vassago haiku forum, this seems like the best place to show off my iconoclastic build/fabrication creativity for the upcoming Arizona Trail Race 800 (Mexico to Utah on the Arizona National Scenic Trail). 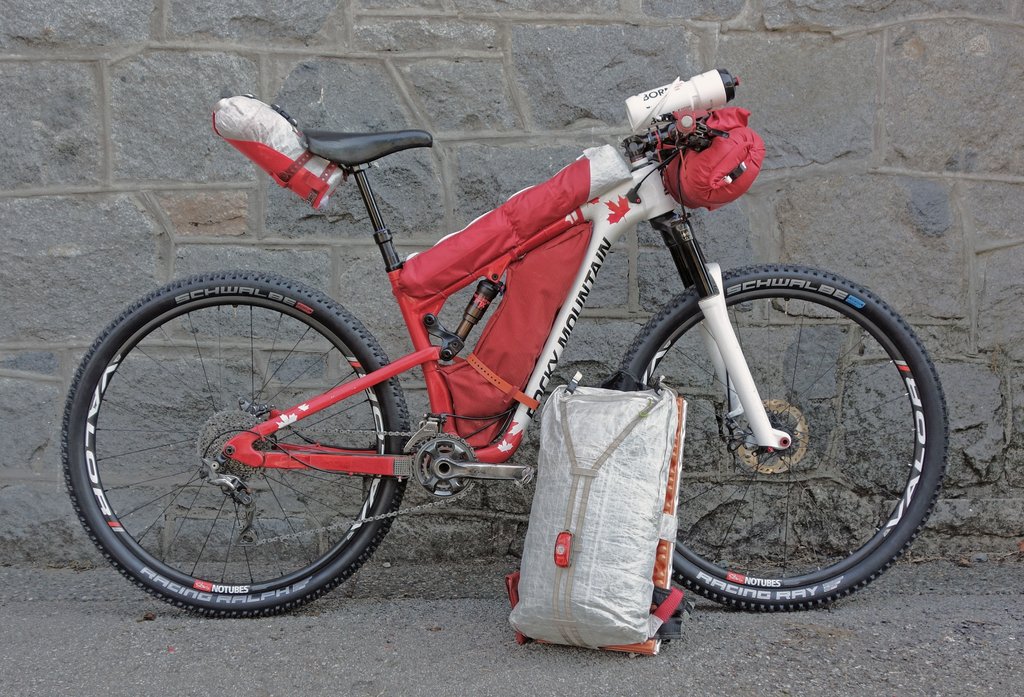 Looks like a well thought out shredpacking rig. I've fought the battle between the seatbag, dropper and rear tire on a FS bike myself. It's quite a puzzle to get it right. Do you have clearance at max drop and full suspension compression?

Good luck with the race.

Taprider, we experienced seatbag-to-tire contact problems on a small Liv Hail doing 500 km in NZ.  I suggest an extra webbing (not rubber) strap to cinch up the bag tight to the seat.  And with any touring we've done, there is always too much gear taken along.  Minimize, minimize.

But don't minimize on the water in AZ!

And my carbon headtube had it's Giant logo worn off and scratched up by the handlebar bag, very similar to yours - protect that nice paint job with some 3M!

After the above photo was taken, I inserted 9Point8 Stroke Spacers (reducers) and have 4mm extra clearance for mud with full suspension travel with seatpost dropped 88mm (with the spacers the overall length of seatpost is reduced, so in a current photo the collar of the seatpost would appear 33 mm higher).

As well, the ski straps are flexible enough, that I can use my butt to lever/cheat the back of the bag down further.  Rode from 7th down on the weekend with water in the Bot (pot with a threaded lid) in the seatbag for weight, and everything worked as planned, but will carry a leather toe strap just encase.

Looks and sounds like you're well prepared for the adventure, taprider. Good luck and let us know how it went!

And my carbon headtube had it's Giant logo worn off and scratched up by the handlebar bag, very similar to yours - protect that nice paint job with some 3M!

3M is already there. But the sleeping kit roll is suspended from hiking poles stepped out ahead of the handled bar with carbon tubes I cannibalized from an old too short handlebar.  The front roll doesn't touch the headtube

Mine didn't touch the headtube either, except when riding along and not caring about it.  Sounds like you are as ready as can be.  Sweet setup, good luck!

Tap - good luck with the race.  I'd be more than happy to read a report on it.

"elect fewer little-thinking "I've got mine" pricks" - Great Quote Andrew.  I am going to use it liberally.

Very cool sounding ride, home made kit and story taprider, best of luck out there.