Learn to Manual with Ryan Leech

Ever have the wheelie dream? The balance point feels like a bean bag chair. Making that dream come true? Easy. Just one thing: I need to learn to manual.

Poke that full-screen button and enjoy some north shore vibes as Carlson and Barelli lap up the rain, sleet and snow on Mt Seymour.

Jesse Melamed heads to the Shore on a Rocky Pipeline to test out Maxxis’ new plus-sized tires.

“What’s going through your head while you ride? Line choice, a healthy bit of fear, the first sip of that beer…”

“Coming into the trees with that much speed does not seem like a longevity-optimization technique, but these guys do it weekly…”

This thing might actually be a lot of fun to ride, even though it will instantly turn you into a jerk.

"...it was always going to be the XT version of Di2 that would be of greater interest to the bike-buying public."

Are Product Reviews Full of Sh!t?

"How have we collapsed inward to a state where product reviews aren't worth the damn megabyte they consume..."

MEC Dirt Search is a Canada-wide contest that awards $10,000 each towards trailbuilding to one group in the East and one in the West.

With the front derailleur being pushed nose first into the loam, the logical step in the drivetrain campaign is to attack from the back.

“It can be proven mathematically that the awesomeness of various things (beer, music, mountain bike trails) is directly proportional to its exclusivity.”

“Upon consulting those closest to him we decided that it was best to release this edit both as a fitting tribute to a great person and as a reminder to enjoy the ride of life.”

I Broke My Ribs – Again

Do you know how to crash? Why can’t you sell your old bike for good money? How cool can a 44 year old really be? Uncle Dave takes on all questions… 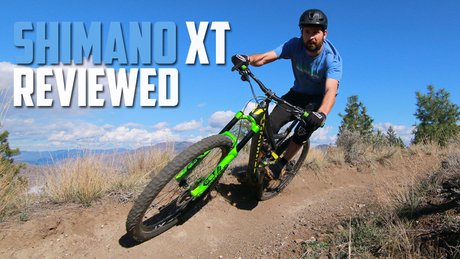 SRAM Level Brakes share the lineage and technology of the Guide lineup, in a lighter design aimed at XC and Trail riding.