Atwill is cleared hot on the South Island.

A full report from Derby Tasmania, and the second stop of the Enduro World Series.

Gwin takes some time to get the new setup dialled in just right.

The Best of Times, The Worst of Times
Ruff Winter

You can't say no to a riding buddy like that when they give you the puppy eyes.

Unleashed on the streets of Salzburg, with a riding style straight out of the Naughties...

Danny squeaks his way down the UK National Downhill Series course for Round One.

They may not have 11-speed drivetrains, but their green colour technology is top notch.

Rogatkin throws down despite locking up his win in the first run of the competition.

Relive a classic piece of Clay Porter video goodness from reel to reel. 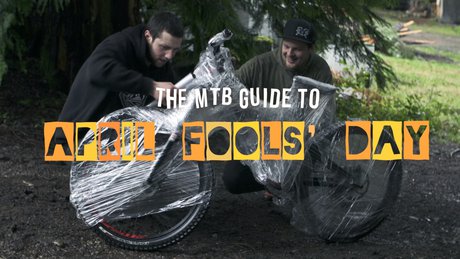 NSMB has created the ultimate guide to April Fools' Day. With the help from IFHT and the Coastal Crew, we've laid out the best pranks for mountain bikers. Featuring classic pranks such as the ball bearing gag and a few you've probably never heard of.

How Far Should One Go?
The Dudes of Hazzard - Dreams Shattered

Things don't go as planned when an aspiring local attempts to join the notorious Dudes.

Dedicated to finding the fate of her Fighter Pilot father, rider Rebecca Rusch journeys the length of the Ho Chi Minh Trail.