The X-Fusion Manic dropper post was one of the most exciting products I saw at Interbike 2016. It has the lightest lever action of any dropper I’ve tried, the included remote is ergonomic and its adjustability is excellent. The guts consist of a well sealed simple to service cartridge layout. The post has a retail price of $200 (USD). 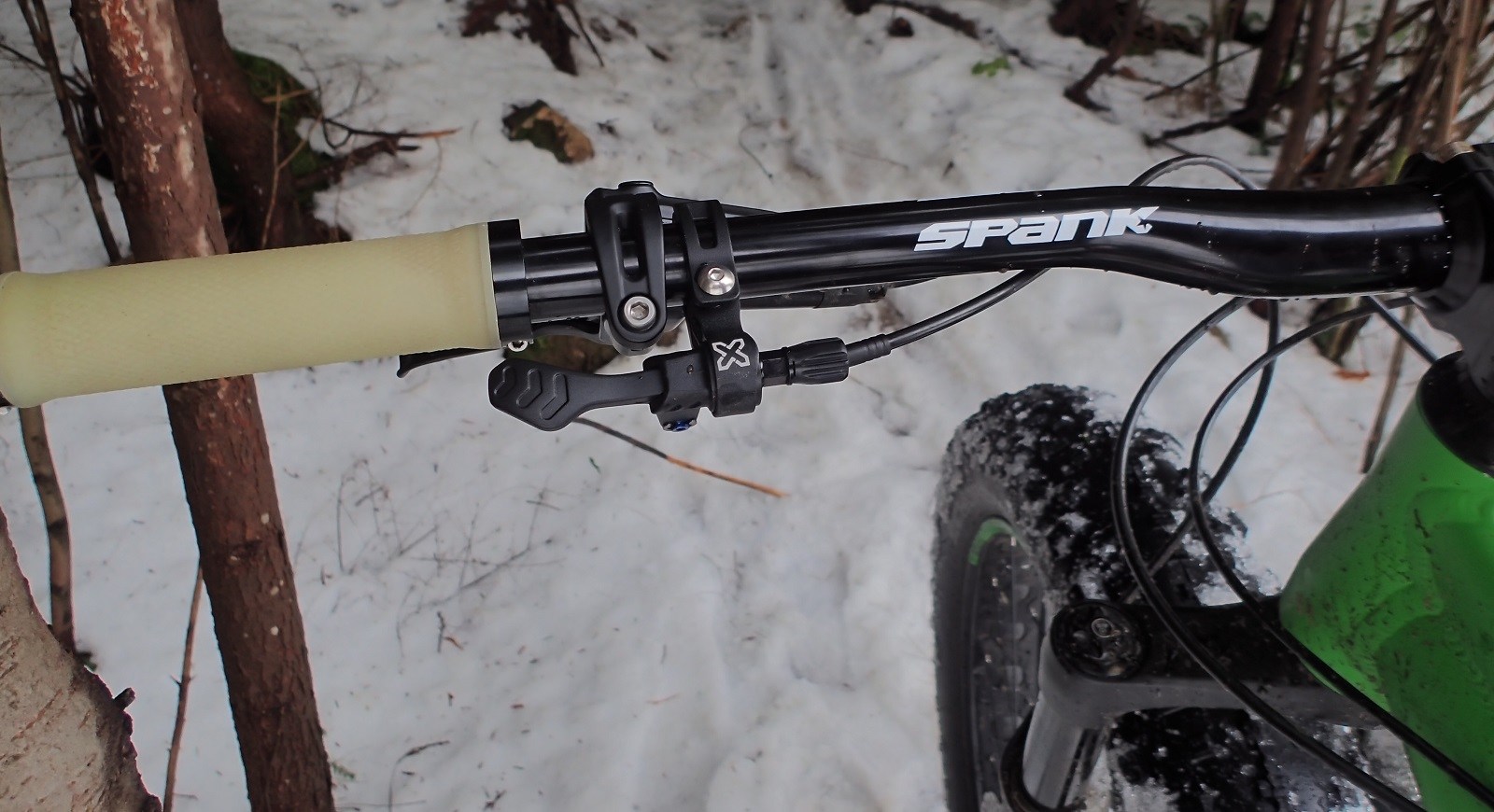 The remote lever is included in the $200 (USD) price tag. The lever blade swivels 360° in the clamp. The lever blade itself is tightened into position via an 8mm wrench inline with the barrel adjuster. The clamp tightens to the bar with a 3mm Allen wrench.

I wrote at the time that X-Fusion was calmly introducing some sanity into a product category where many say pricing is out of control. At $200 it’s a reasonable upgrade for a lot of lower price-point bikes, like our Marin Hawk Hill, that do not come equipped stock with droppers.

The concerns with a price-point oriented trickle down of technology are always two-fold. Are the materials used good enough to hold up to regular use? And, what manufacturing shortcuts were used to achieve cost savings? This is especially true of a product category very susceptible to reliability troubles.

My plan is pretty simple. First, a teardown with the help of my friend James at SuspensionWerx to check out the guts and build quality of the X-Fusion Manic. Then, ride the post into the ground on a few different bikes and report on how it holds up.

The X-Fusion Manic cycles infinitely through its 125mm of travel using a gas charged cartridge. Compared to their previous Hilo seat posts, which housed an emulsion system, the Manic is significantly faster, easier, and cleaner to service. 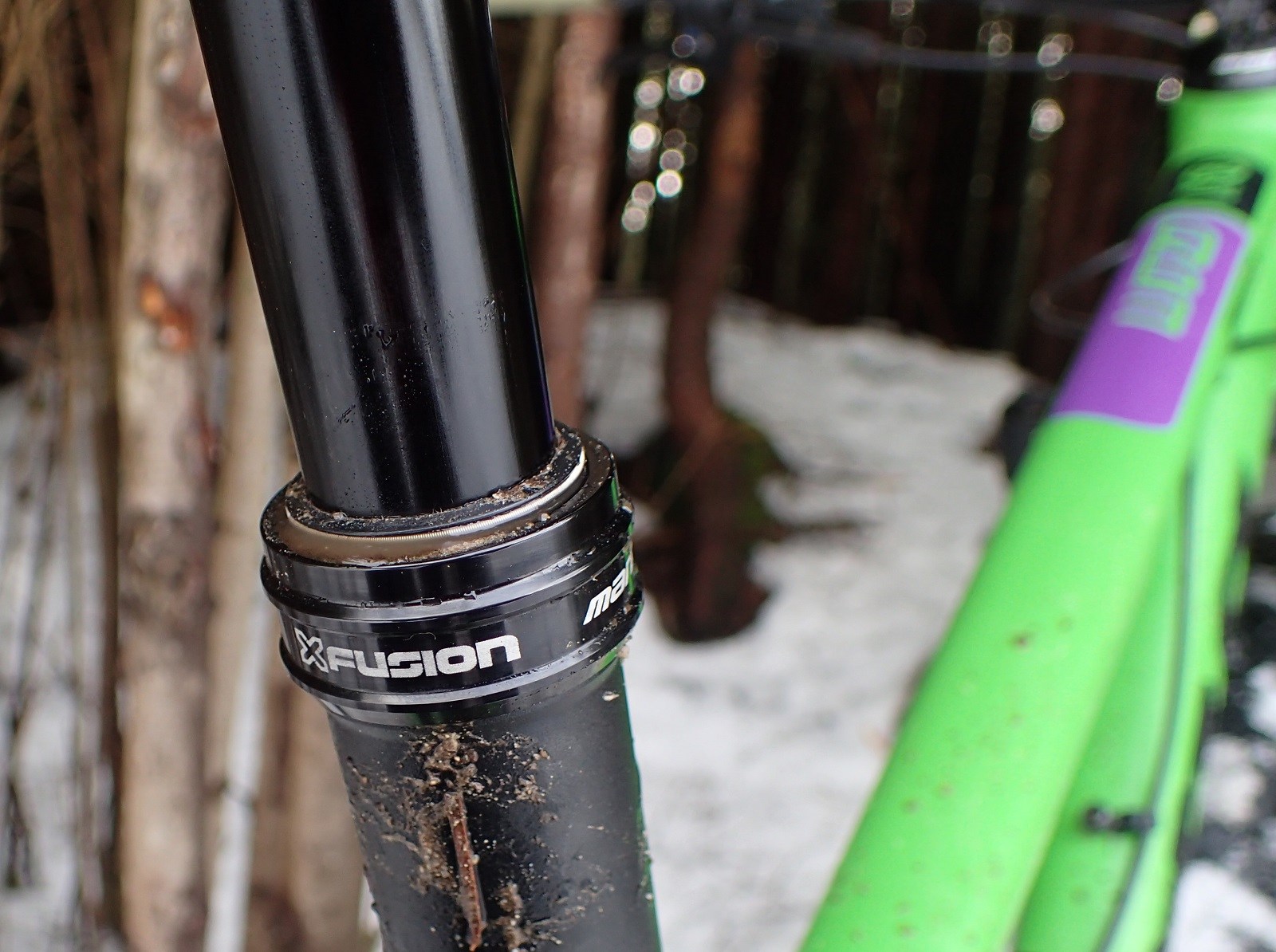 Compared to their Hilo dropper, the new X-Fusion Manic has a significantly shorter seal head. No longer tasked with containing a fluid bath while being subjected to rider loads, the new seal should have significantly improved longevity.

The main seal on the Hilo was responsible for containing a fluid bath and keeping crap out of the post. Subjected to the elements and rider loads in every direction, they were prone to leaking under hard use. The Manic is a complete rethink that follows the conventional wisdom of most other dropper posts.

One place the X-Fusion Manic does own every post on the market, right out of the box, is the light lever action. I don’t have an issue actuating most posts on the fly, however, I know a fair number of riders who find dropper posts overly firm to activate. The Manic should definitely be on their list of posts to check out.

The X-Fusion Manic has the lightest lever action of any post I’ve used. At any price. This is thanks to the linkage actuator amplifying input from the remote lever. The big return spring pulls the lever back into position quickly.

It takes ten minutes to fully service our new dropper post. It has a two-year warranty. A new cartridge is $25 out of warranty. We’ll ship you one if you need it. Even to Alaska. – Joel Smith @ X-Fusion

It’s impressive how simple the X-Fusion Manic is to take apart. Any competent mechanic with a vice and a strap wrench is good to go for a full cleaning. A set of shaft clamps, or at the least soft jaws, are recommend to unthread the actuator from the cartridge if a replacement is required.

When rebuilding the Manic at SuspensionWerx, they use a number of specialty clamps for the cleanest, fastest process. In helping with this teardown I’ve asked James to show me how to do it with the tools I have at home.

A vice and a strap wrench are all that is required for a full teardown to re-lube the Manic. In the case of a cartridge replacement, a set of shaft clamps is recommended. SuspensionWerx has a different process, and tools, for taking the Manic apart but I asked James to show me how I could do it at home.

The X-Fusion Manic was well lubed right out of the box. The pair of brass keyways resist twisting play and are as easily replaced as the seals and bushings.

The best part about the ease of service combined with X-Fusion’s historically awesome customer service is it should significantly reduce downtime in the event of a problem or a scheduled service.

Riders who live a significant distance from shops or service centers can cheaply and easily stock service parts. Just purchase a cartridge ($25), seal kit, and keyways and keep them around for when they’re needed. It’s a one beer job at most. 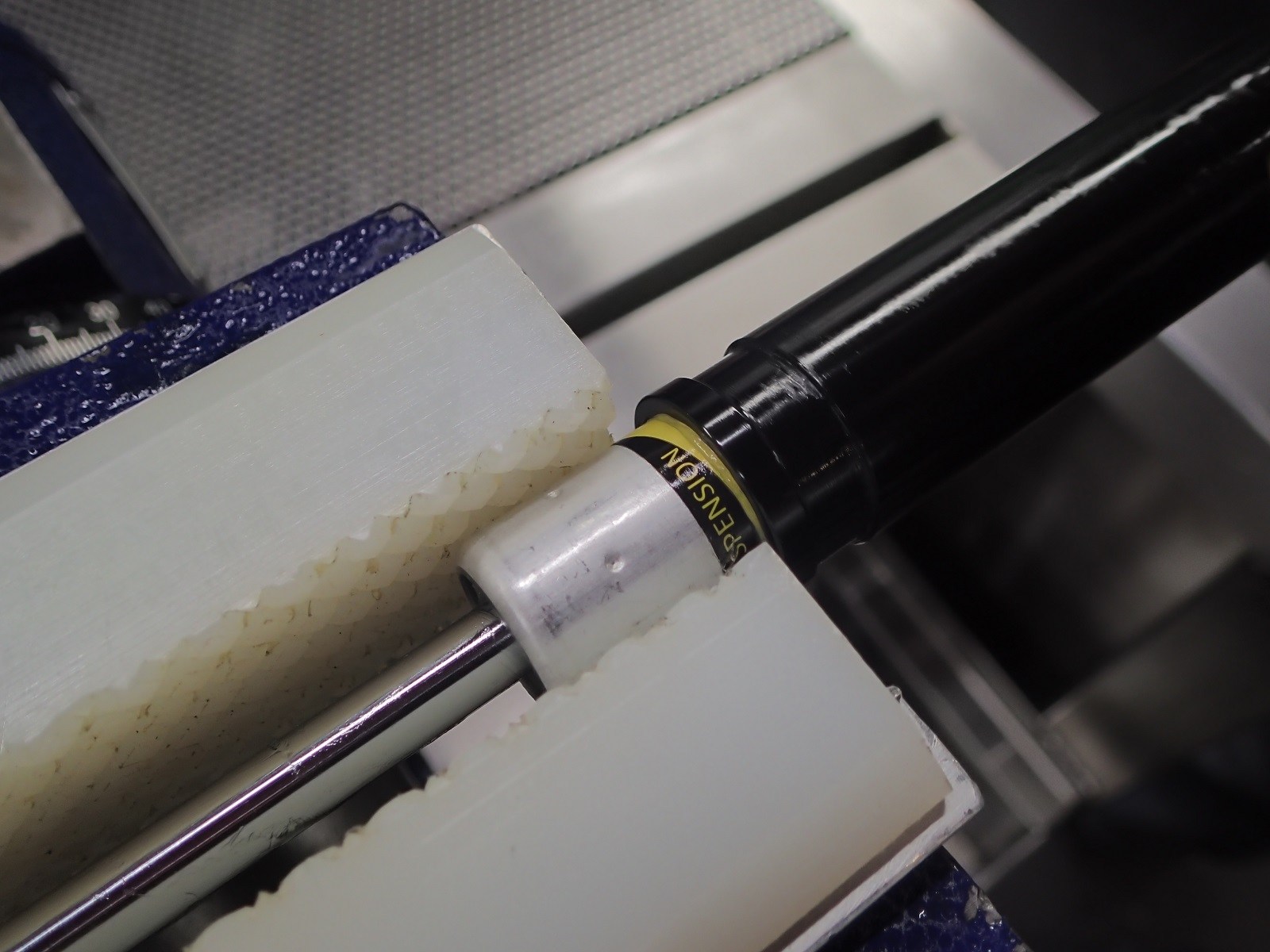 The Wintek cartridge is well sealed inside the post. It threads into the top and the actuator button sits behind the thread-on actuator linkage.

Wintek supplies the Manic’s gas cartridge along with the cartridges for a lot of dropper posts on the market. This invites the oft jokingly stated comparison between dropper posts and office chairs, since Wintek also manufactures gas springs for that application.

I’ve had an awesome experience with the Wintek cartridge in my Crankbrothers Highline and I’ve heard nothing but positive feedback on those posts. There are some other posts out there with cartridges that are not so well sealed and they are nowhere near as smooth. Wintek is becoming the big dog of dropper internals.

The post is quick. The post is smooth. The post stops where ever I like in its 125mm travel. For anyone struggling to fit a 125mm post between their seat clamp and buttocks, the minimum height is among the lowest available. That’s thanks to the short seal head and minimal stack of the two-bolt clamp. 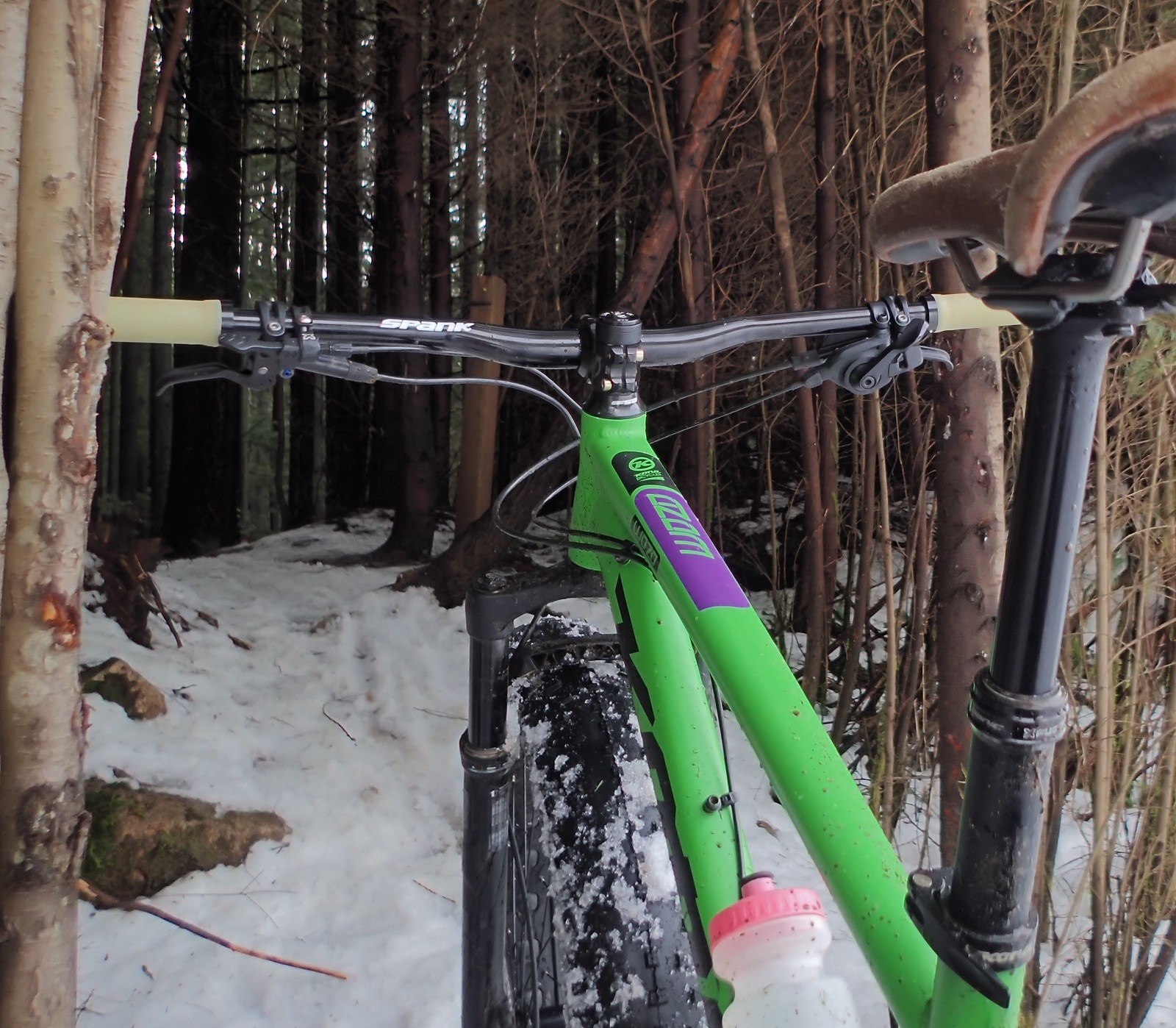 The X-Fusion Manic is a full 25mm shorter (minimum height) compared to the previous Hilo models. This is accomplished through a shorter seal head assembly and a reduction in stack height for the two-bolt saddle clamps.

From moment one, the most notable element is the previously mentioned oh-so-light lever action. It’s actually vague – like the cable isn’t properly tightened – the first time you push on it. Almost effortless. I am now used to it but it is definitely a different sensation than any other lever or button on any mountain bike I’ve owned.

I know quite a few people who complain about the force required to engage their dropper posts, even with fresh cable and housing. The linkage system on the Manic is a game changer for those who have struggled with other engagement systems.

If I have one complaint out of the box it’s that the dropper post cable is a bit fussy to change. It uses a 2mm hex key at the linkage end. To be fair that’s coming off the best-in-class cable changes of the Highline. Also, I’m moving the posts between different bikes so I’ll be doing cable swaps way more frequently than most riders. 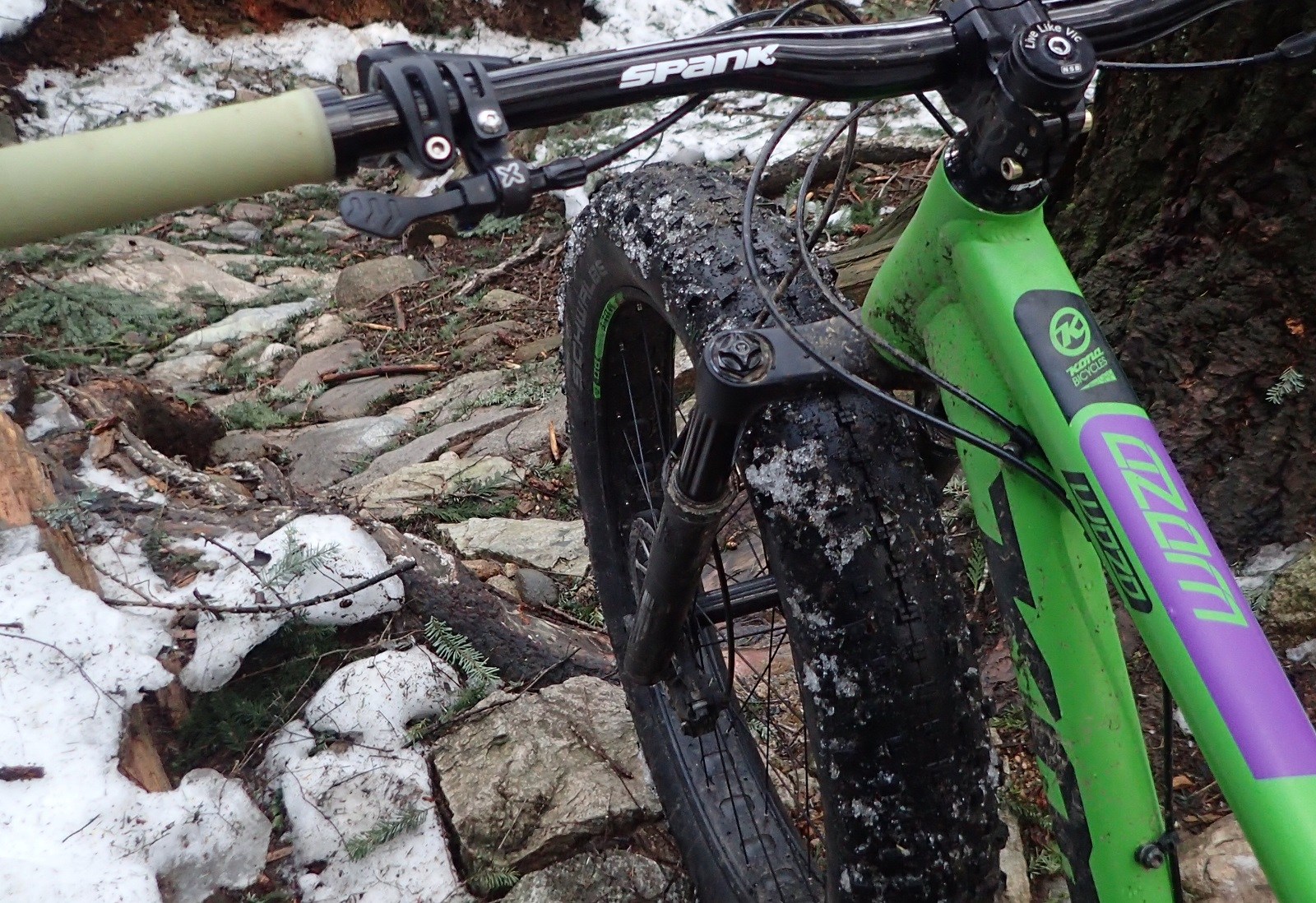 After a handful of rides on the WOZO!  – both a bike name and a war cry by the way – the Manic is going to spend time on a few other machines over the coming months.

After talking to Joel at X-Fusion and taking the post apart with James at Suspensionwerx, I’m really excited to see how it holds up. At this price point if it’s durable it will be hard to justify anything else. Especially with the easy service, low cost of replacement parts, and light action. There’s also a longer travel version in the works.

I’m planning to run the Manic on a number of bikes including some with slack actual seat angles – a dropper post’s worst nightmare – and I’ll report back.

The Manic is available for purchase in early March. For more check the Manic page on xfusionshox.com

If this post holds up, will you vote with your wallet?

Stealth routing, easily obtainable and reasonably priced replacement parts…I'll likely be buying one of these for my new bike.

Wow. Love this one for price and performance. I had a personal nightmare with my Fox Transfer from day one and the warranty was equally faulty. I am in the market for a new dropper post and this is near the top of the list. I will be voting with my wallet. Price sanity is greatly appreciated.

The elephant missing from the room is definitely a unique Shimano designed/made/branded dropper from the biggest-S.

I'm also surprised that CaneCreek has released a dropper post remote but not their own post (I have no inside information that would suggest this comment is foreshadowing… but come on).

Lastly, I find it challenging to reason why Cannondale hasn't leveraged their experience making one-sided mountain bike forks (needle bearings / awesome hydraulic lockout) to make a wicked dropper post. If space is the issue then get on the 35mm ID seat tube train and don't look back.

I saw this on the front desk at SuspensionWerx when I went in there last week. Anyone know when this will be available?? I'm really looking forward to the Manic, as performance value has always been my #1 goal when it comes to my equipment.

I've heard beginning of March (~ a week away) and also that they're shipping. I've asked for a confirmation from X-Fusion.

X-Fusion USA will have them the first week of March. In stock at retail partners ASAP after that.

No ETA, sorry. I do know from Interbike that it is in the works.

150mm posts should be shipping this summer if you hadn't already heard.

How is the return speed compared to a Fox Transfer, Crankbros Highline or other posts?

The slow as molasses return on my Xfusion hilo strate is rough after using a Gravity Dropper for years.

Also, ever hear anything about the 150mm availability?

The 150mm version is available now.

It’s much faster than the Highline. Very similar to the Fox Transfer and current KS Lev. All are slower than a GD or Fox DOSS but I wouldn’t call them slow.

Then again, I’m a big fan of the Highline and it is slow so maybe I’m not the best person to ask re. speed.