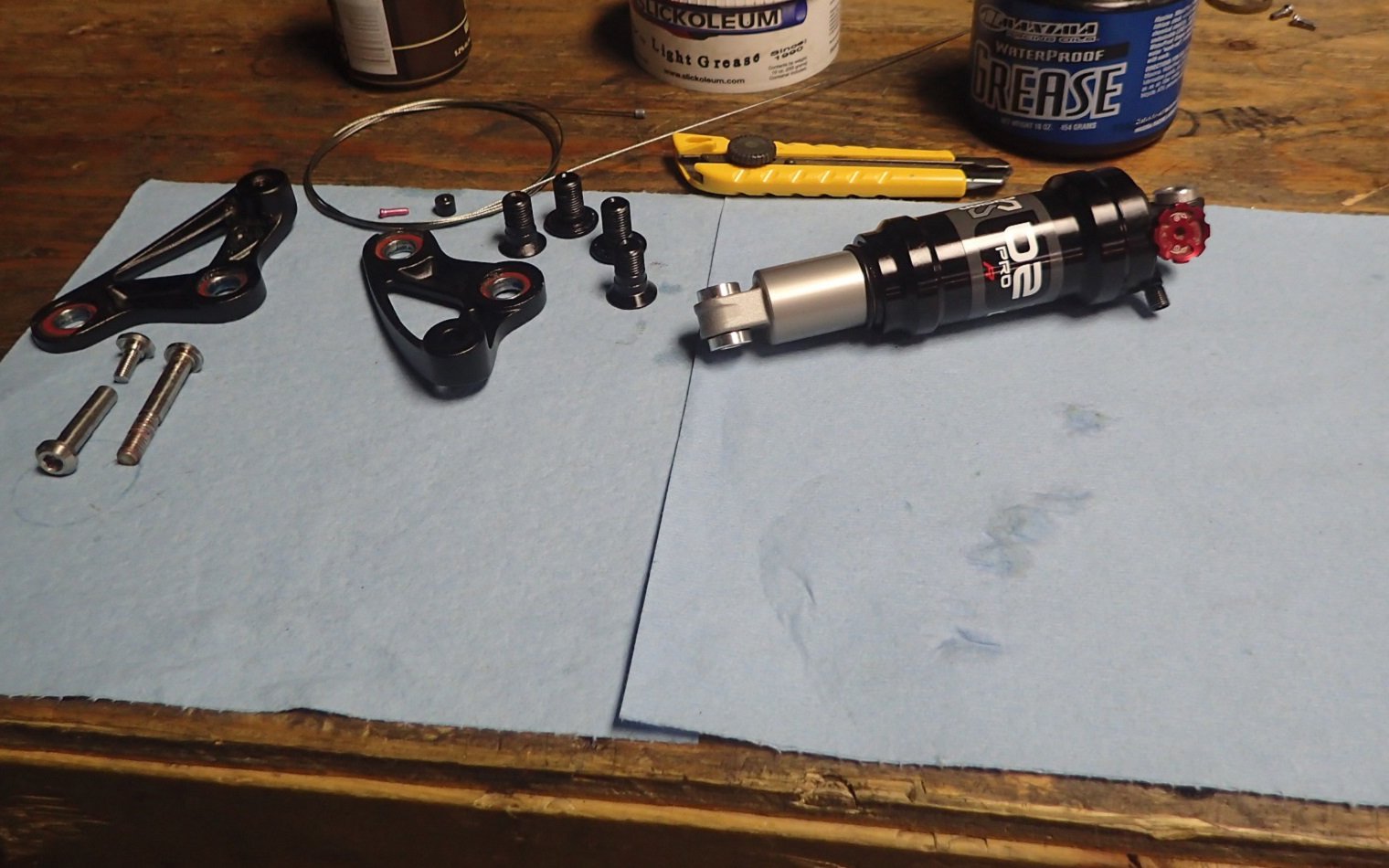 It's actually snowing again here on Vancouver's North Shore. But I promise - Promise - that Spring is right around the corner.

And your poor, poor bike. It squeaks, it groans, it clicks, it shudders at the thought your sweaty crotch loading and unloading the two creaking un-lubed bolts holding your saddle in place. 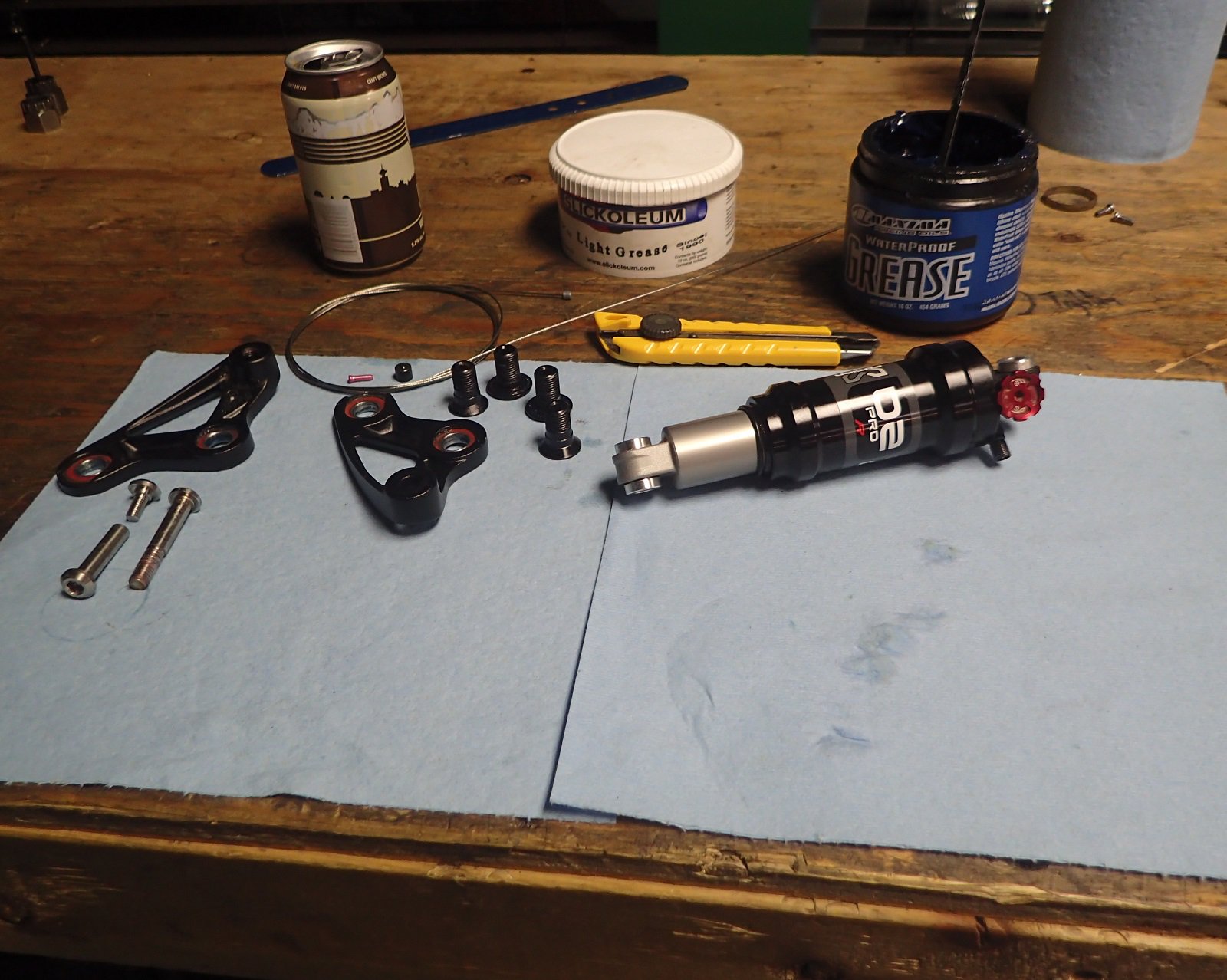 Before Marin's $1500 (USD) Hawk Hill found itself in this work stand at Bikeroom it had quite the adventurous life. Out of the box it was recruited into the demo fleet for Interbike in Vegas. Then it lived with Uncle Dave for a time.

I'm sure under similar circumstances any bike would be clamoring for a spa treatment. The Hawk Hill is very well appointed for its price point - kudos to the product manager for maximizing performance on a tight budget - but I certainly expect to have to pay more attention to the consumables like cable and housing and bearings. 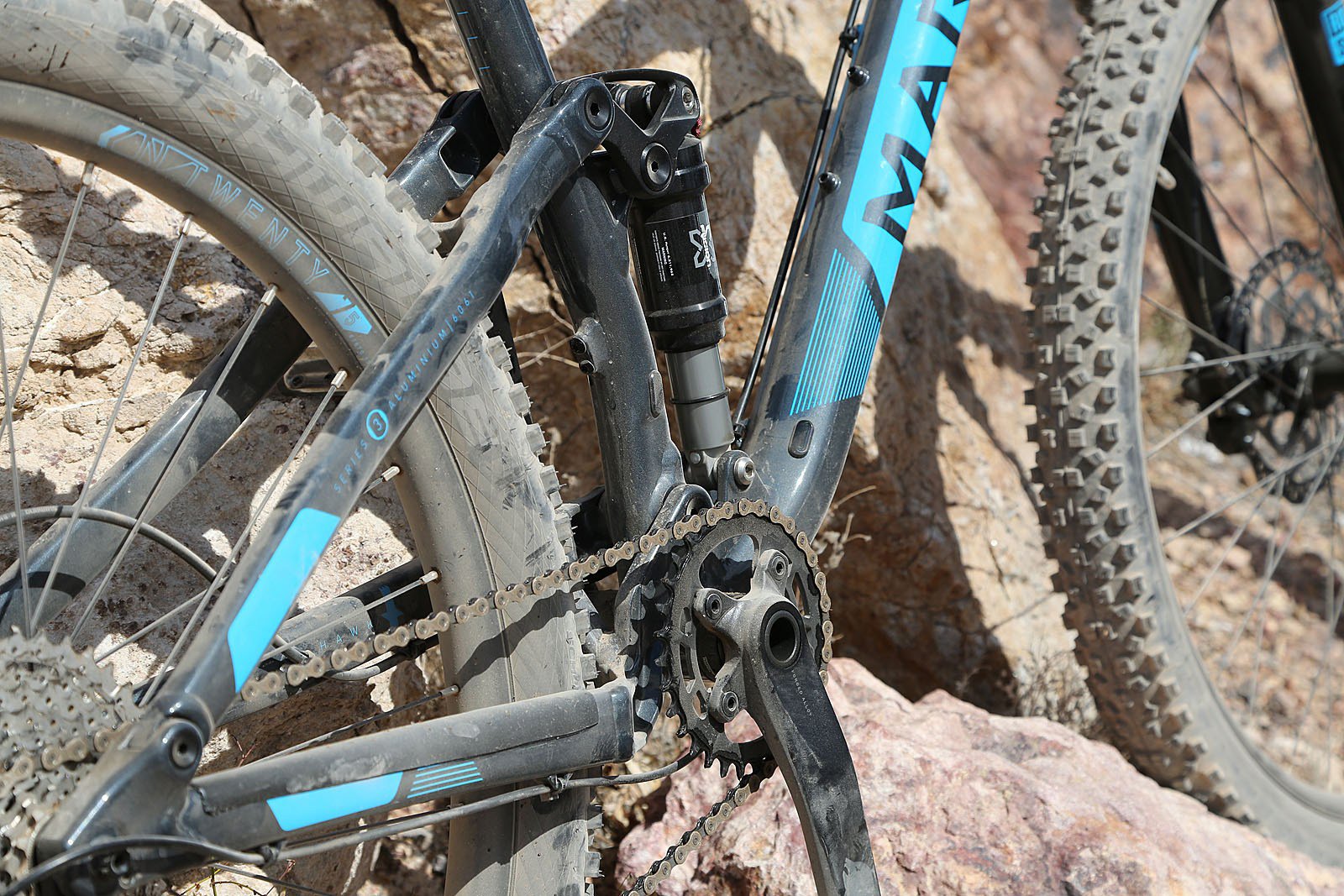 First the Marin Hawk Hill was a demo bike in the desert. Then it came to the Shore. Now it is time for some Spring maintenance. Photo: Fergs

That is to say that this type of Spring maintenance is applicable to any mountain bike - and a great idea with a long season of hard riding approaching - but a bike with higher end components may not need this level of love as soon. 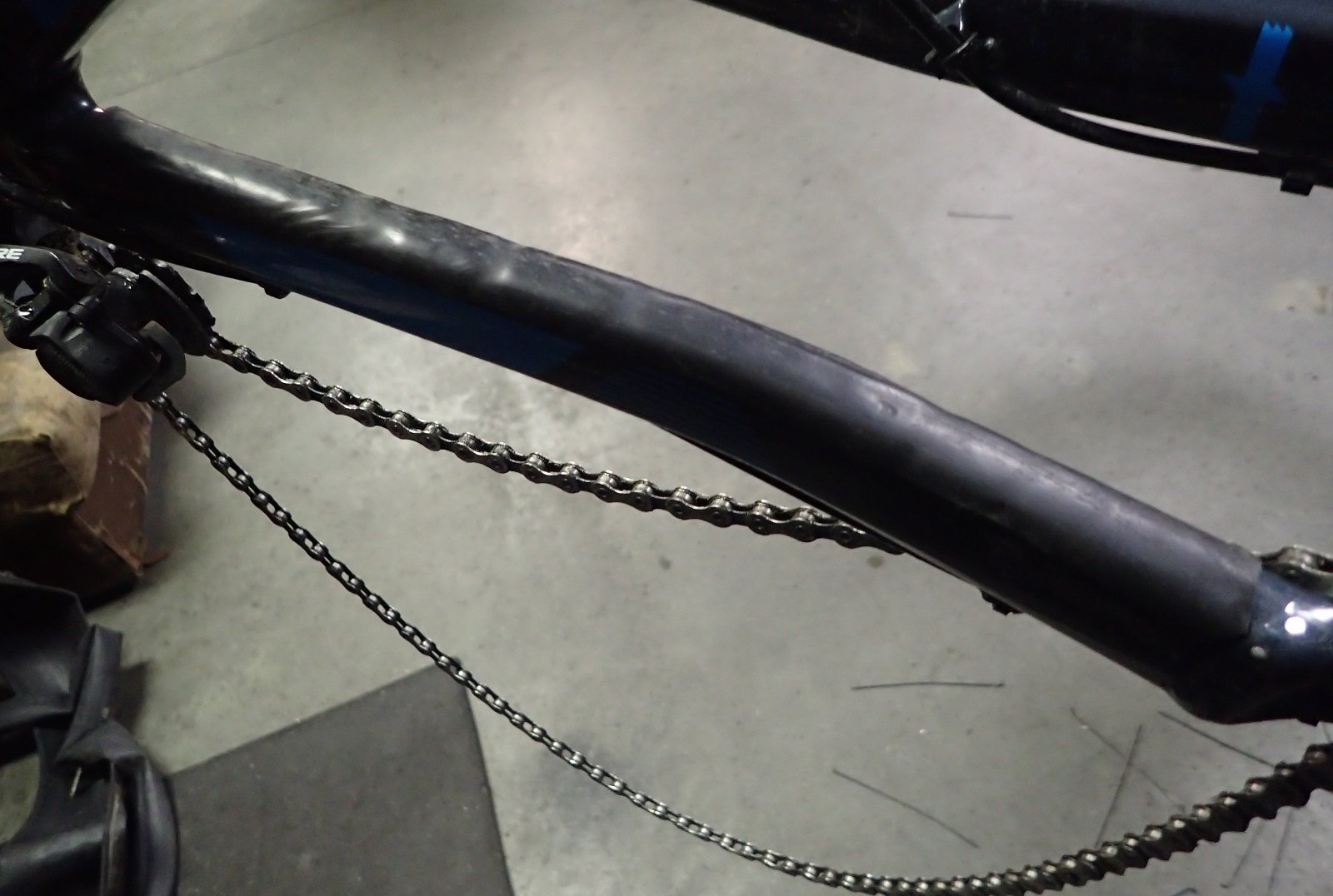 Rather than spend a bunch of money on a molded chainstay protector, the Hawk Hill uses a simple strip of rubber mastic tape. The rubber strip provides awesome protection. The mastic material bonds it tightly in place. It's cheap and easy to replace in a future Spring service.

When I inherited the Hawk Hill the shifting was already seriously compromised. It was to the point that I was concerned about wrecking the Deore shifter when forcing it through shifts. The culprit was a basic galvanized steel shifter cable that had corroded inside the full-length housing.

With the housing in okay shape, I pumped it full of Tri-Flow and fired in a stainless steel shift cable. Instant, and massive, improvement in shifting. The current generation of Shimano Deore shifter and Deore clutch rear derailleurs are really impressive. The chain moves up and down the bike's SunRace 11-42 cassette a half-step slower than a boutique drivetrain but shifting speed is totally acceptable. 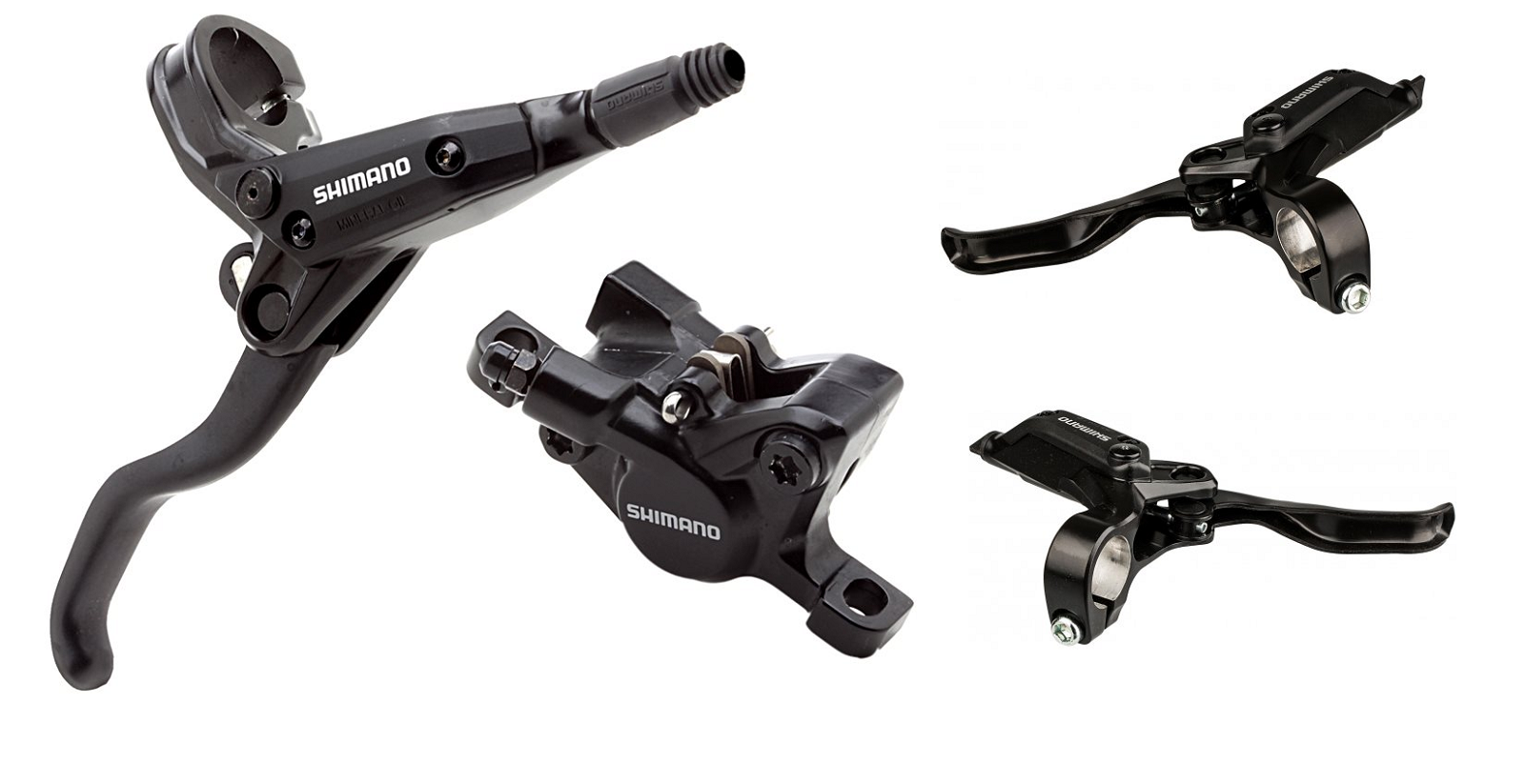 Brake bleeds are a given for Spring maintenance - and a few times a year in my case - and the Marin's Acera-level Shimano M396 brakes use the same straight forward process as their high end brakes. Photo: Shimano

Included in the basics I refilled the tires with tubeless solution, checked the spoke tension, and bled the Hawk Hill's Shimano brakes.

The 'entry level' non-Servo Wave Shimano M396 brakes are the sleeper hit in their line-up and a great spec choice by Marin. Big reservoir, massive leverage from long lever blades, and a firm but easily modulated lever feel. I'll go into greater detail in a future review of the brakes themselves but suffice it to say that the bleeding process is exactly the same as Shimano's higher end components (i.e. very easy). 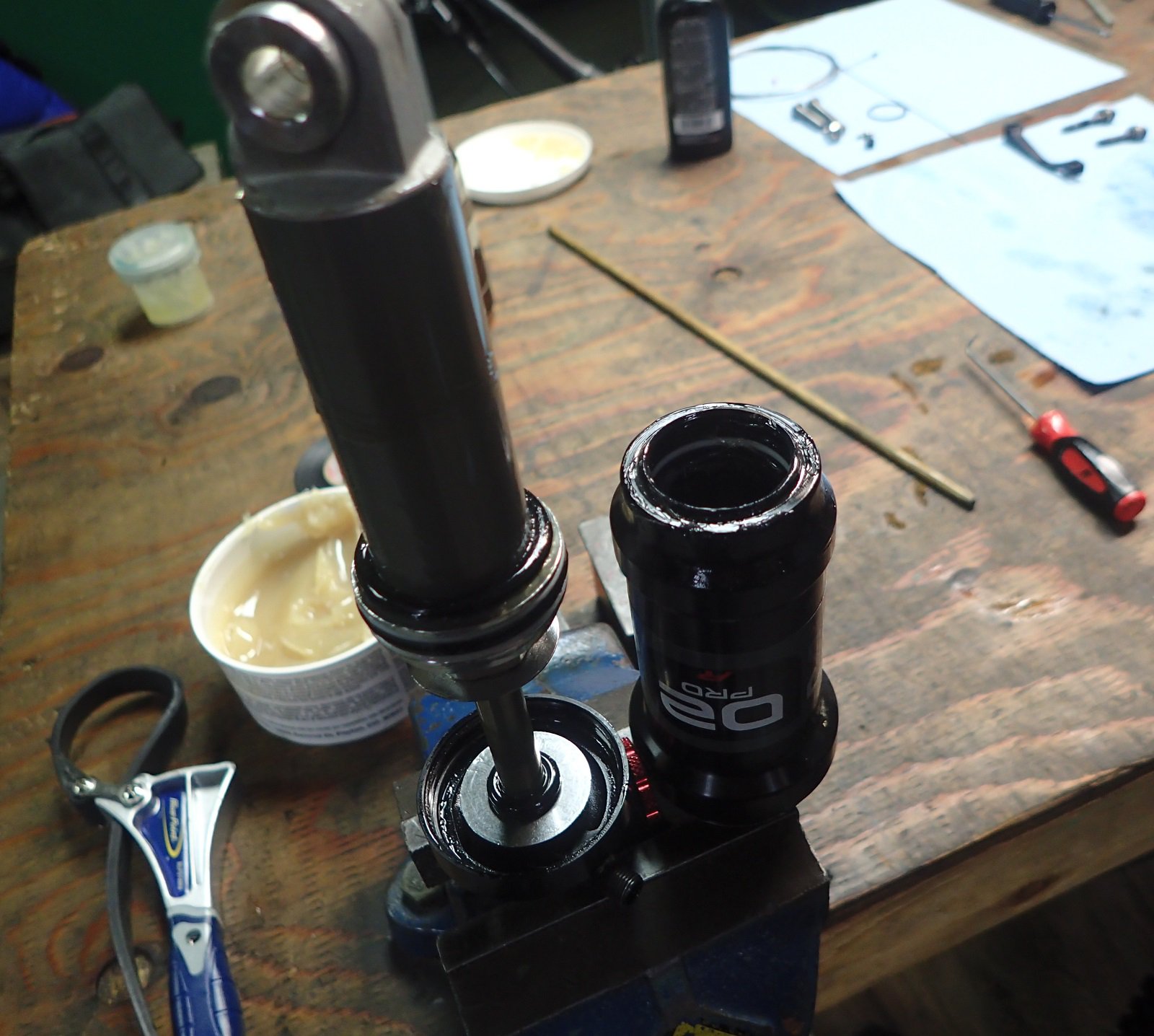 The Hawk Hill comes equipped with a basic X-Fusion O2 shock and suspension performance benefited greatly from a simple re-lube. This practice is equally simple with the vast majority of air shocks and technically only requires a strap wrench.

It is totally possible to lube the air can on X-Fusion's O2 without removing the shock from the Marin - just be sure to let the air out - which negates the requirement for a vice. As much as I love some ghetto mechanic-ing I removed the shock since I was servicing the frame bearings at the same time.

My five stage process:
1. Open beer
2. Remove shock from bike
3. Remove valve core from shock (can't be too careful)
4. Thread off air can with a strap wrench
5. Lube air can with Slickoleum
6. Re-install air can
7. Re-install shock on bike

With the shock out of the Marin and the wheel removed, the rear end wasn't cycling as smoothly as I expected. I guess this comes back to what's fair as a bike reviewer.

I always re-pack bearings on my own bikes. I haven't re-packed frame bearings on any of the bikes I've tested for NSMB.com. Then again, usually the bikes I'm riding are fresh out of the box and this is a piece about easy maintenance anyone can do at the start of the season - so I'm justifying it.

Other than the main pivot bearings, and the IGUS seatstay-dropout pivots, all the Hawk Hill's bearings are conveniently housed in the linkage plates. Easy access.

With the exception of the IGUS seatstay-dropout pivots and the main pivot bearings, all of the Marin's bearings are housed in the linkage plates. I can't complain about easy access.

For the main pivot bearings, I repeated the same process with the bearings in the frame. 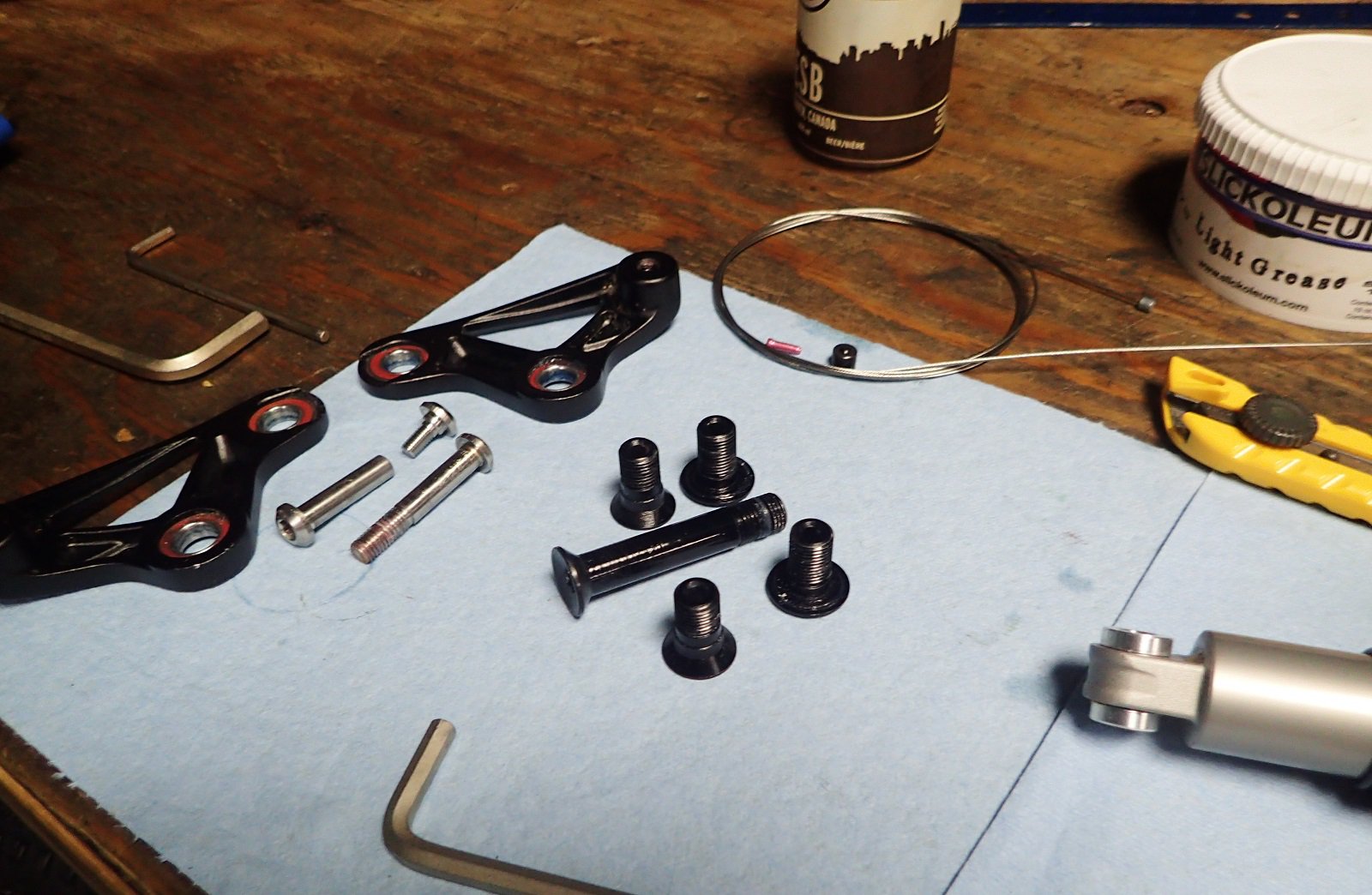 For aluminum bolts mated to aluminum threads I generally just use grease on the threads and shoulder. Best practice is to grease the shoulders and use blue Loctite or Anti-Seize on the threads.

With the Marin's back end moving beautifully - more on that in the coming review - the poor RockShox Recon felt like a slurry of crap and glue sticks. True, the Recon is a very basic fork, however, it is equipped with RockShox's excellent Solo Air system and the steel stanchions make for a robust, albeit heavy, chassis.

Loosen the bolts. Give 'em a smack. Pull the lowers. Slickoleum everything. Add 5cc of fork oil to each side. Re-install the lowers. It's a quick job when not changing seals.

The Recon's seals were relatively new and looked clean so it was just a matter of performing a basic service and lubing everything up. I took the lowers off. Lubed everything with Slickoleum and with Jeff's advice I added 5cc of heavy fork oil to each side of the lowers before sliding them back on.

The fork was instantly better and I'm now running significantly more air pressure for better support while still experiencing way better small bump performance. The Recon is still the weak link in the Marin's suspension - it has a very, very, basic damper - but it is surprisingly rideable on aggressive terrain.

The fork did purge a bit of the Slickoleum from the seals for the first couple rides after service but it is clean and very smooth now. 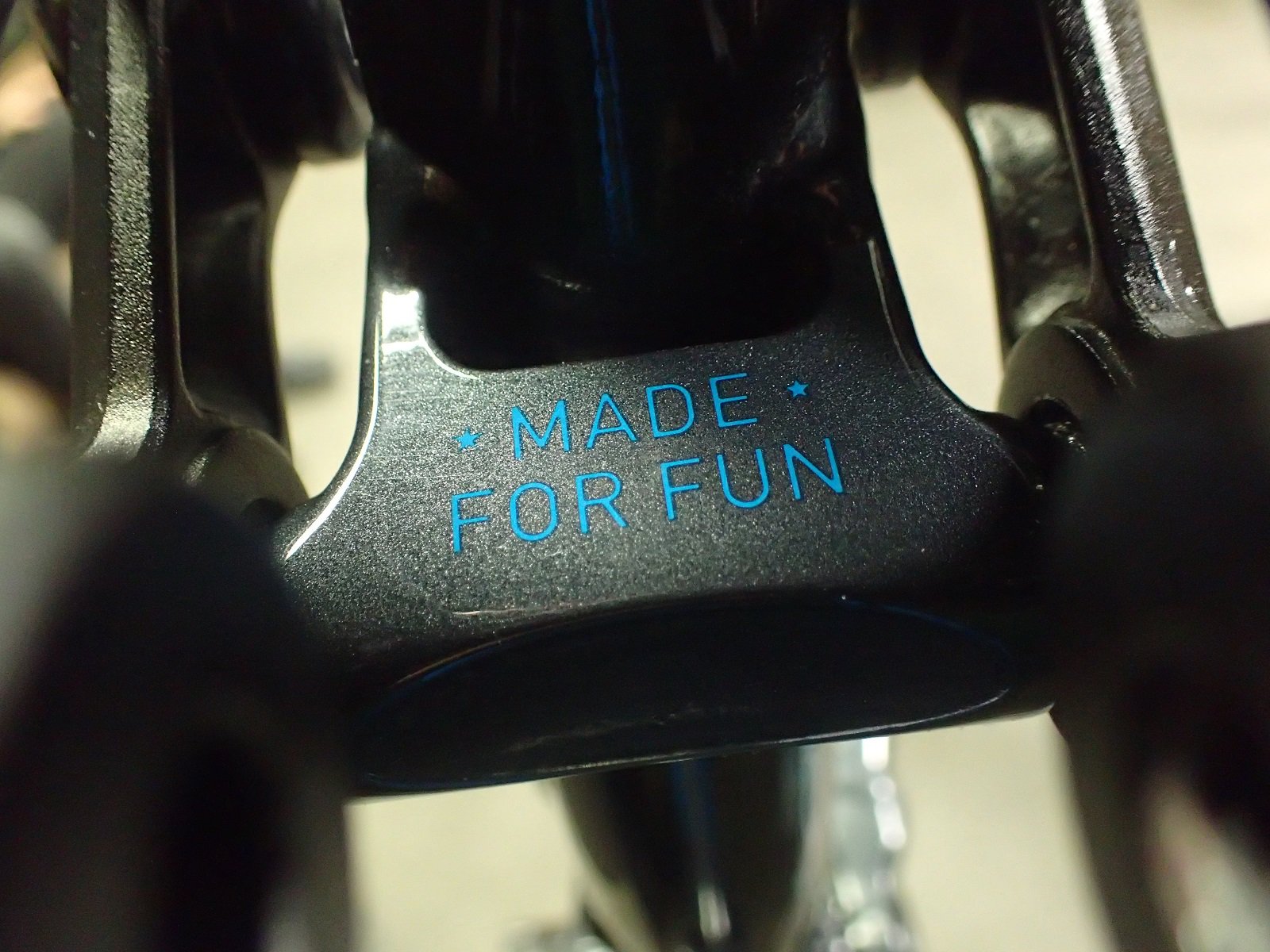 Made for fun. With the suspension components moving smoothly the Hawk Hill is well on the way to achieving that goal.

I greased the stem bolts, seat post bolts, and the little screws for my lock-on grips. Then I proceeded to do a complete bolt check on the rest of the bike.

No squeaks and no creaks. The Marin is performing to its maximum capabilities which is a lot better than a bike many times its purchase price that is totally roached. Especially since the Hawk Hill proves that good geometry and suspension kinematics aren't only the purview of boutique bikes.

Suspensionwerx and your local bike shop are a little less busy right now. Get that stuff done now while the weather sucks and save yourself having to beg for things to get done more quickly mid-season.

I'll take that a step further. I was in chatting with Jordan at Cove Bikes the other day (one of the best local mechanics) and it's crazy how many little extras he puts into a tune up when the shop isn't busy.

It's not that they don't appreciate riders supporting the shop all year round, but when he has the luxury of time the value per $ is more than just a quick turnaround.

Yep... at our shop winter service gets you some extra love just because we have more time.   Professional all the time regardless.

This. Hopefully I adequately framed that it isn't about doing less in July; it's about doing more in February.

Hey, sorry about that.  I definitely put it away wet and it didn't see sunlight for about a month before you put your hands on it.

No worries; I think it was a lot of factors. Hopefully you get another chance to ride it - I'll be using it as a platform to test a few different OE level products.

It's a prime example of how good geometry shouldn't have anything to do with the price of a bike. The rear suspension also works fantastically now - with a very basic shock.

I'm genuinely excited about the market shift that the Hawk Hill is going to force onto other brands that are paying attention - the gap in the entry level OE $2000 price point range is so huge, and the customer-direct mail order value can only do so much, that a disruptive bike like this should win -- with proper local bike shop support.

The three biggest value sources for riders in that entry point are actually getting the geometry/sizing right, having everything configured correctly for the first ride, and having the rest of the kit/support to go out and enjoy riding... so Marin can achieve all of these things.

I'd really like to see a Trace/O2 or Monarch RL/Yari variant of this bike still, with some SLX or equivalent kit and a dropper post stock, because a setup like that with good tires and maintained in good shape is going to spank anything else out there that may have more bling on that parts, but hasn't seen proper service in over a season.

Yes! Not to give away the plot but this frame deserves another price point - it's that good // better than any of their other FS frames I've ridden.

The O2 shock works awesome, the FSA crankset with steel N/W ring is fine, it already has a cartridge headset, the SunRace cassette is fine, and with proper rotors the brakes are awesome. Actually the Deore drivetrain is surprisingly good.

For my extra money I'd like to see a basic Trace or Yari up front (I'd choose the Trace, the Yari is an easier sell for shops), real brake rotors, an upgraded wheelset (RaceFace Aeffect?), and an X-Fusion Manic Dropper post stock.

If they can put that together for $2500 CAD (which I think is realistic with the drivetrain remaining as is) it's a totally disruptive bike as you say.

Hi Andrew. Could you share the torque specs for the Hawk Hills rear suspension.  Thank you.