I previously reviewed Wolftooth’s original Drop-Stop narrow-wide chainring. A nicely manufactured piece of cogery (cogs + jewelry = cogery), it worked as advertised, providing solid chain retention. In fact, that very ring is still in service; continuing to do its job reliably.

A few companies are now producing not-round rings of various configurations. Wolftooth has jumped into the fray with this, an elliptical ring. The primary intent is to effectively increase the gear ratio when you have the most leverage on the crank, and decrease it when you have the least. The description they give is that (for example) a 34t ring will feel like a 36t where you have the most power, and a 32t where you’re at the weakest. The result, in theory, is smoother power transfer to the rear wheel, and (perhaps) improved biomechanical efficiency. The claims don’t sound unreasonable so I was keen to give one a go. 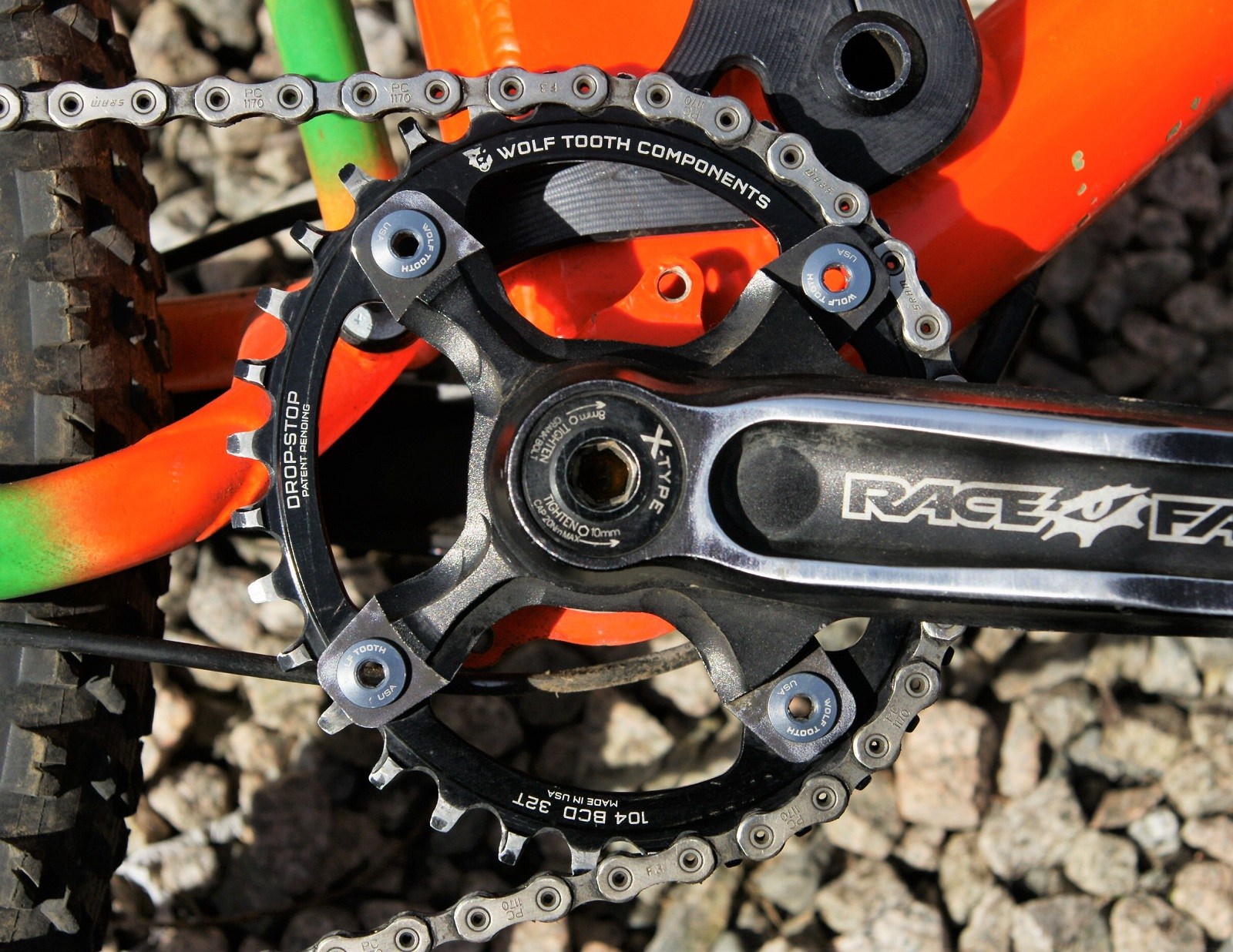 Yep, ovoid. I typically use a top guide come race season to be on the safe side, but have run this ring naked for the last couple months without a single chain drop. I’m also sporting a nice set of Wolftooth aluminum chainring bolts (available separately). Check out the OG Raceface Atlas cranks – I’ve been using these for a full decade!

For my first rides I had the ring mounted on a hardtail – to eliminate suspension movement from the equation. For one who’s trained his legs to spin (relatively) smooth circles over the last quarter century, this thing felt a little weird the first few times out. A subtle pulsing feel; a bit like suspension bob. Not significant, but certainly discernible. This perception did fade after a handful or rides, however. Interestingly, after a stint back on a round ring, I tossed this on my 150mm enduro / trail rig, and the difference was much less clear. Almost like the power delivery was somehow in phase with the suspension movement – or perhaps just masked by it. It actually felt ‘normal’ on the first ride out on the squishy bike. 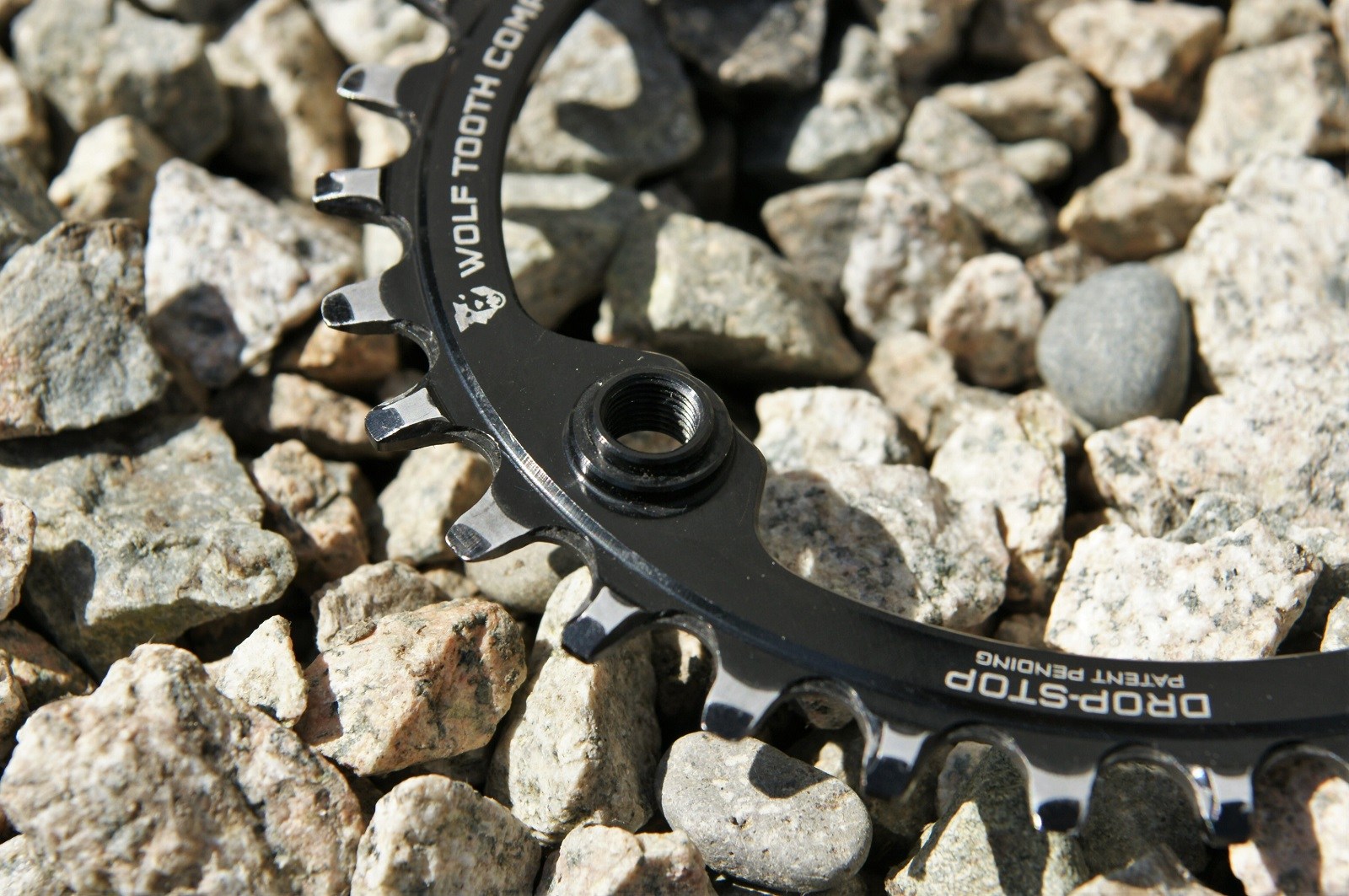 Threaded for a standard 8mm chainring bolt, with a 2mm offset to improve chainine to the big cog.

The claimed improved climbing traction was noticeable – at times. Occasionally, on lung barfing tech climbs, when the pedal stroke sometimes gets a bit ragged, there are moments when you anticipate a spin, but instead are rewarded with grip. A subtle improvement, for sure, but discernible. Chain retention was a non-issue, as expected. I ran the ring naked, and experienced no chain drops.

Tooth geekery: Wolftooth has developed some fairly sophisticated profiling; the wide teeth are wider at the leading edge to support the chain forces, and narrower at the trailing edge to reduce friction (at larger chain angles) and provide a bit of room for mud to channel out – more detail here. We don’t have the clay content around here to test serious mud clearing capability, but the ring was unaffected by the worst northwest winter dirt I came across. 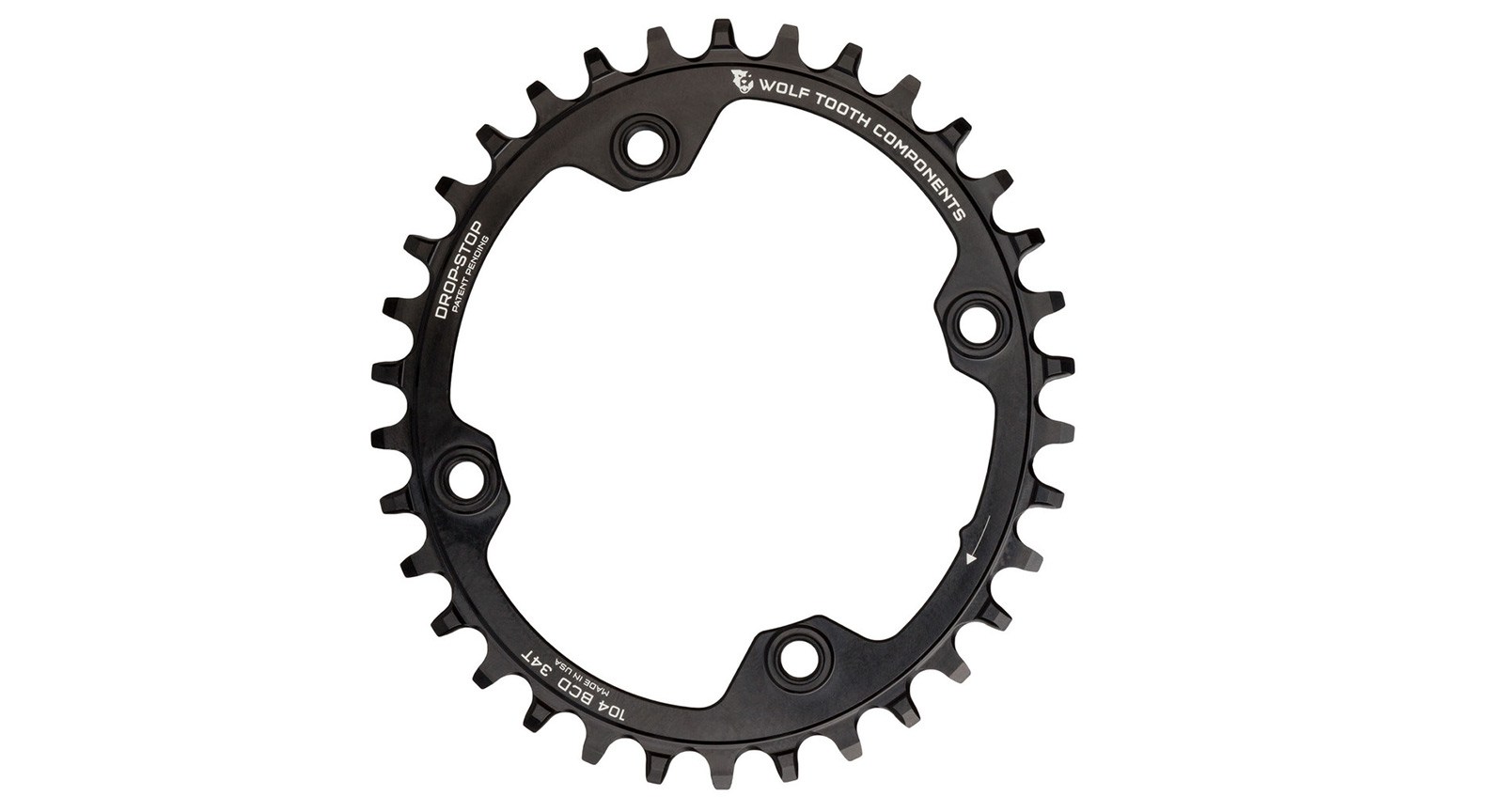 “Our proprietary design has ovality of 10% and timing of 112° after TDC (top dead center). These values provide the benefits of an oval ring without the drawbacks of greater ovality or more aggressive timing. ” – from the Wolftooth web site.

The benefit of this ring seems to be a bit more tangible with stompy rather than spinny pedalling technique. I think there’s something biomechanically interesting going on with these. Perhaps it’s psychological, but it feels like I’m able to put down a bit more power when going into anaerobic / sloppy sprinting / 10/10ths mode. Perhaps the leg musculature is engaged a bit differently, I don’t know (it’s not like we were engineered to turn perfect circles), but it seems to benefit these legs. Or I’m imagining things. Placebo or not, I’m keeping the ring on my bike.

The tested 104bcd ring sells for $63.95USD. Elliptical rings are also available in all the other standard bolt circle diameters and direct mount configurations as well as several tooth counts. See them all here…

Are you feeling out of round?

I began using an oval ring (Absolute Black) a year ago. It works without any weird side-effects and anyone who mentions Biopace is an ill-informed moron. You do not notice any pulsing, neither my chain nor derailleur have suffered any problems and shifting as well as chain retention has been bulletproof. What I do notice is that I feel much stronger and faster up climbs and that I am running higher gears than I did with a round ring. I will not go back to a round ring. My friends have switched too and say the same thing. Run whatever you want, but don't knock it until you try it.

Shimano Biopace. Look it up. Notice when it was tried before.

Biopace was the exact opposite…easier during peak power and harder during lowest power…and done for a completely different reason. Not much to compare between the two other than they are not non-round rings.

Yep. Shimano thought pedalling fast through the power part of the stroke would give the rider some momentum to get through the dead parts. I don't know if it worked but we all thought it was dumb and replaced them with round rings. I've used Rotor rings. They seemed to work OK. Shifted badly off road so I removed them.

My logic is telling me that on a road bike where youve eliminated as many variables as possible and it comes down to power transfer only then yeah it will work. On a hardtail off road it might work BUT on a climb surely its dependent on where you are in the pedal stroke in relation to whats under your wheels, sometimes the "harder" power transfer might provide more grip but it might induce slipping too. On a dually though, particularly mid to long travel, the key to smooth power transfer and not suspension activation is as smooth a pedal action as possible!? Anything that induces chain growth is a no no!

Leave it on the road where it belongs!

Smooth power delivery doesn't matter much on a road bike, and power gains haven't been scientifically proven with ovoid rings (some pros seem to like them, like Froome and Wiggins - others have tried them and decided not to bother). However, on a mtb, power delivery smoothness DOES matter on sketchy tech climbs, where this does seem to have a noticeable effect. Will it make you faster? Probably not. Will it save you from spinning the rear tire in loose conditions? maybe.

it eats up the clutch quickly on rear derailleurs so I stay away from these.

actually talked with a guy at wolf tooth during a show and he said it causes less than 1% chain growth and people run them on single speed bikes without a chain tensioner. I think claiming the ring is bad for your derailleur without ever saying chain growth from suspension is bad is a bit short sighted.

i agree. actual derailleur movement when pedaling is very small - less than suspension induced chain growth on most bikes. it's a non-issue as far as i'm concerned.

So you're basing your knowledge on what a person from the profiting company says? Did you really think he would say anything that might dissuade you from buying it?

While your comment about a wolf tooth employee's inherent bias is fair, I would also think that chain growth would be small (relative to suspension cycling), and that evening out the chain tension through the pedaling cycle could mitigate or even improve those factors.

The factor would be most extreme in particularly difficult gear ratios, where most people don't spend their time spinning anyway.

The issue may not be the magnitude of moment, rather than the fact that it is moving so often by small amounts. Any angular movement (even small) of the clutch system is still going to cause wear.

Suspension bob is a very similar load on the derailleur - once per revolution, small amount of motion. Worst case, you have to tighten up your clutch mech every now and again.

Perry, your experience seems to correlate with mine. I've fitted oval to both of my bikes now.