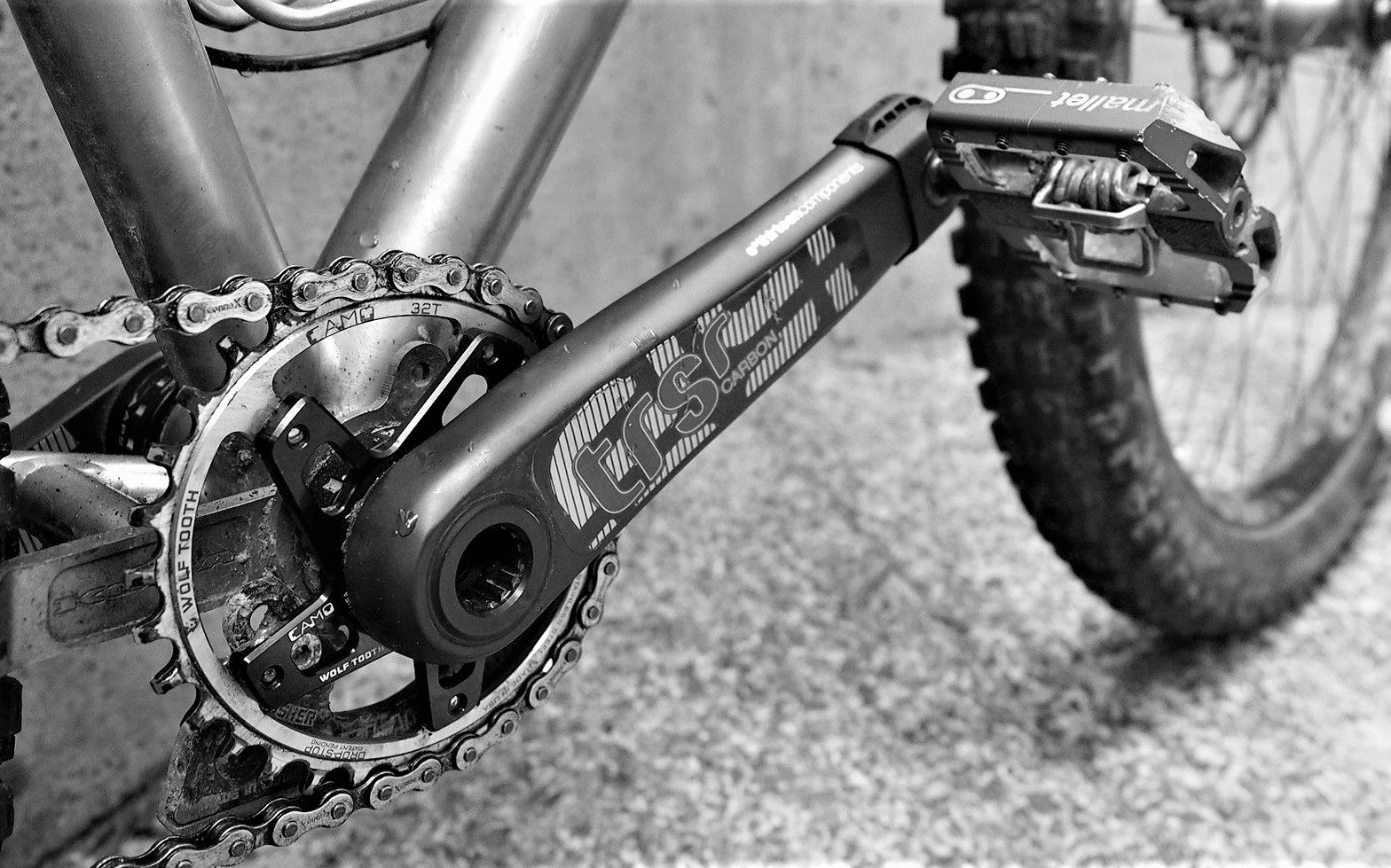 Wolf Tooth makes a lot of interesting stuff. I'm a big fan of their Tanpan which allows for use of a Shimano Shadow Plus clutch, derailleur with a road bike brake/shift lever combo and that's just scratching the surface of the rings, cogs, remotes, grips and other doodads they invent and manufacture.

Wolftooth products are high quality and often well priced. The ReMote cable dropper post is nicely machined and has superior ergonomics to most options on the market but it also costs a few bucks less than inferior factory remotes. *cough* Fox Transfer *cough* 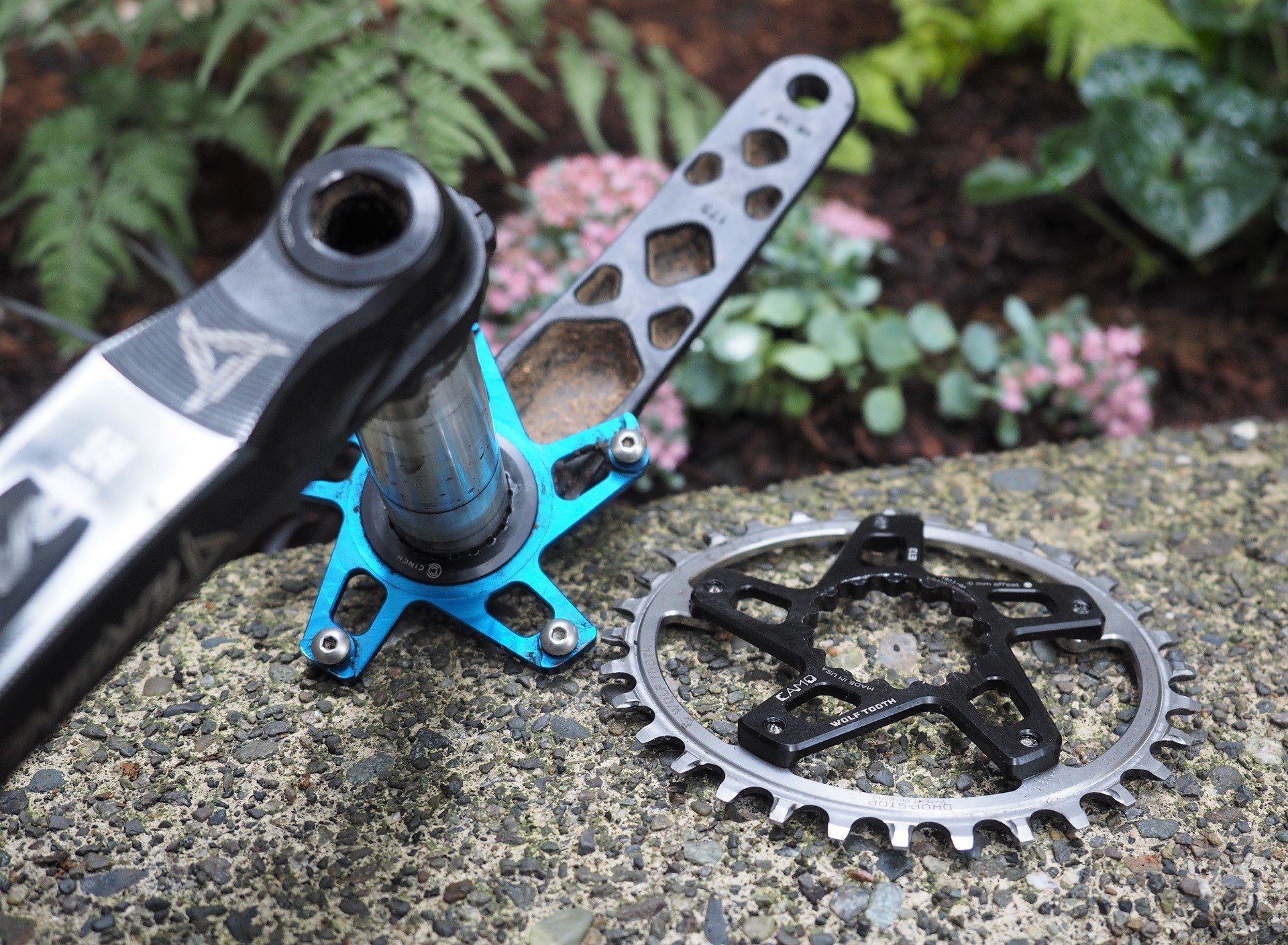 I introduced my Wolf Tooth Camo experience in the Spring and since then I've spent six months brutalizing one of the stainless steel narrow wide chain rings and an oval 32t version along with a Camo spider system. It's been easy to swap one Wolf Tooth stainless steel chainring between three models of crankset. I rode it on e*13 TRSr cranks, Race Face Turbine Cinch cranks and Race Face Aeffect Cinch cranks.

Aside from flexibility the true beauty of the Camo system is inventory control, which directly impacts options and price for we the people. One of the things driving the high price of bike gear is the number of SKUs being warehoused, just count how many different Maxxis DHFs there are and think of how much it would cost to stock two of each.

Wolf Tooth makes a huge range of stainless and aluminum narrow wide rings, both round and oval, to fit the Camo spiders and then five different spiders to fit Race Face, e*thirteen, Cannondale, SRAM and Specialized S-Works cranksets. That means Wolf Tooth can manufacture and stock 1/5 of the chainring SKUs, or offer five times the variety, for the cost of carrying five aluminum spiders.

It's actually more than five because of colour options but that's what we get for being so vain. 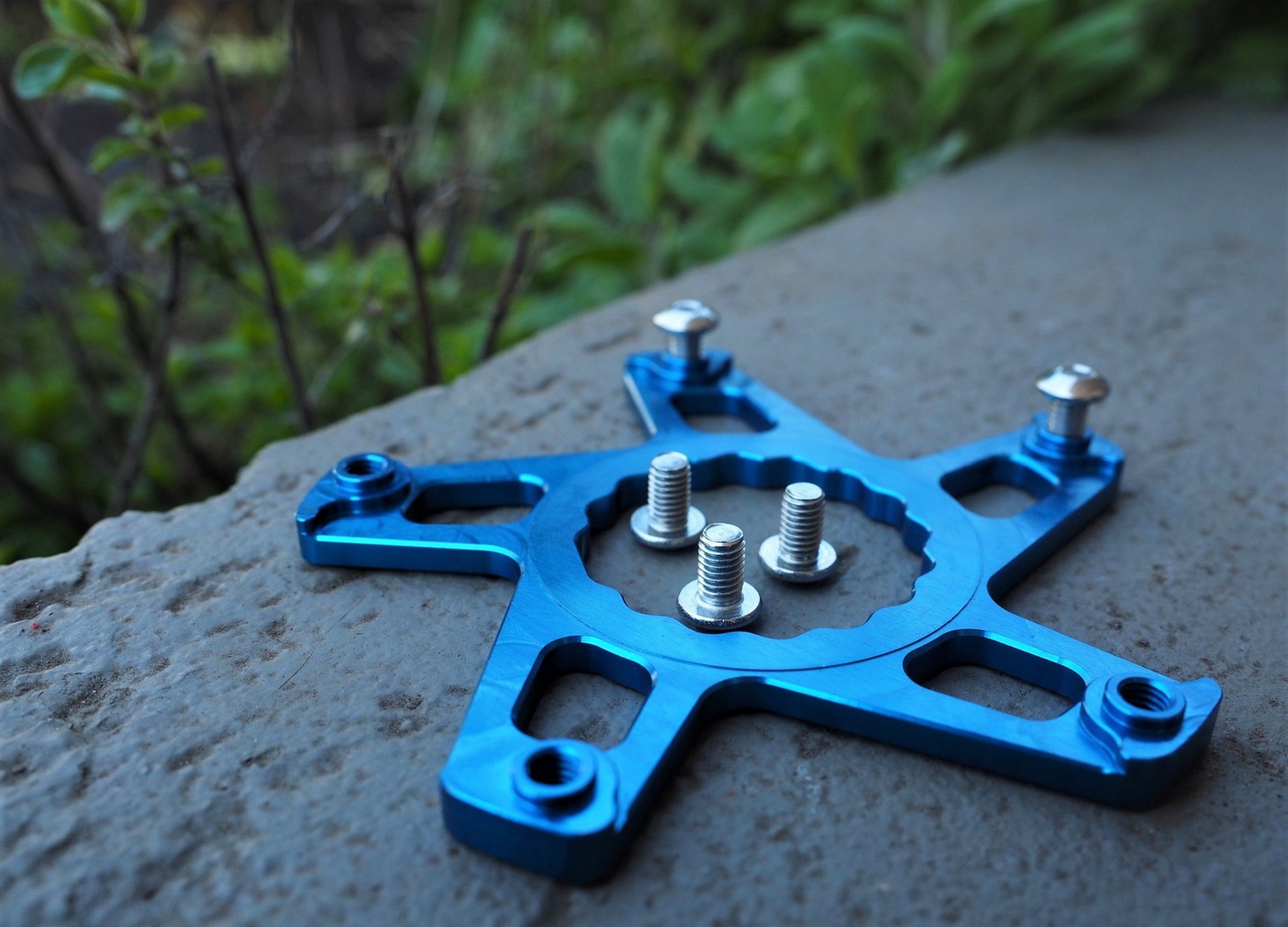 Initially one of my spiders arrived with alloy bolts and the other with stainless steel. Both with 3mm hex heads. Since the ring itself is carried on posts on the spider, Wolf Tooth was initially selling the Camo system with a range of colours of alloy bolts; now they are only offered in steel.

I did experience a failure of one of the spiders where posts sheered off. This was the spider that was initially secured with alloy bolts. Wolf Tooth replaced it immediately with no questions asked. I have not had issues with the other spider, where I have only run steel bolts with blue Loctite. I haven't had any issues with the replacement either. I should also note that I didn't notice the sheered off tabs until I removed the ring to swap it so there was no performance issue with the steel bolts mounted.

I'm not a fan of 3mm hex head bolts and with swapping the ring regularly between two crankset even being steel the heads were feeling sloppy after a few months. I swapped out for steel T-25 Torx rotor bolts and never looked back.

One day I was riding on a quiet back road listening to the magical North Shore slurry of water and detritus grind the sh*t out of my drivetrain when I realized I hadn't checked the Wolf Tooth steel narrow wide for months. I adjusted my chain tension every few rides but I'm using a combination of a high end nickel plated track chain, a stainless steel True Precision cog and the stainless steel Wolf Tooth ring. 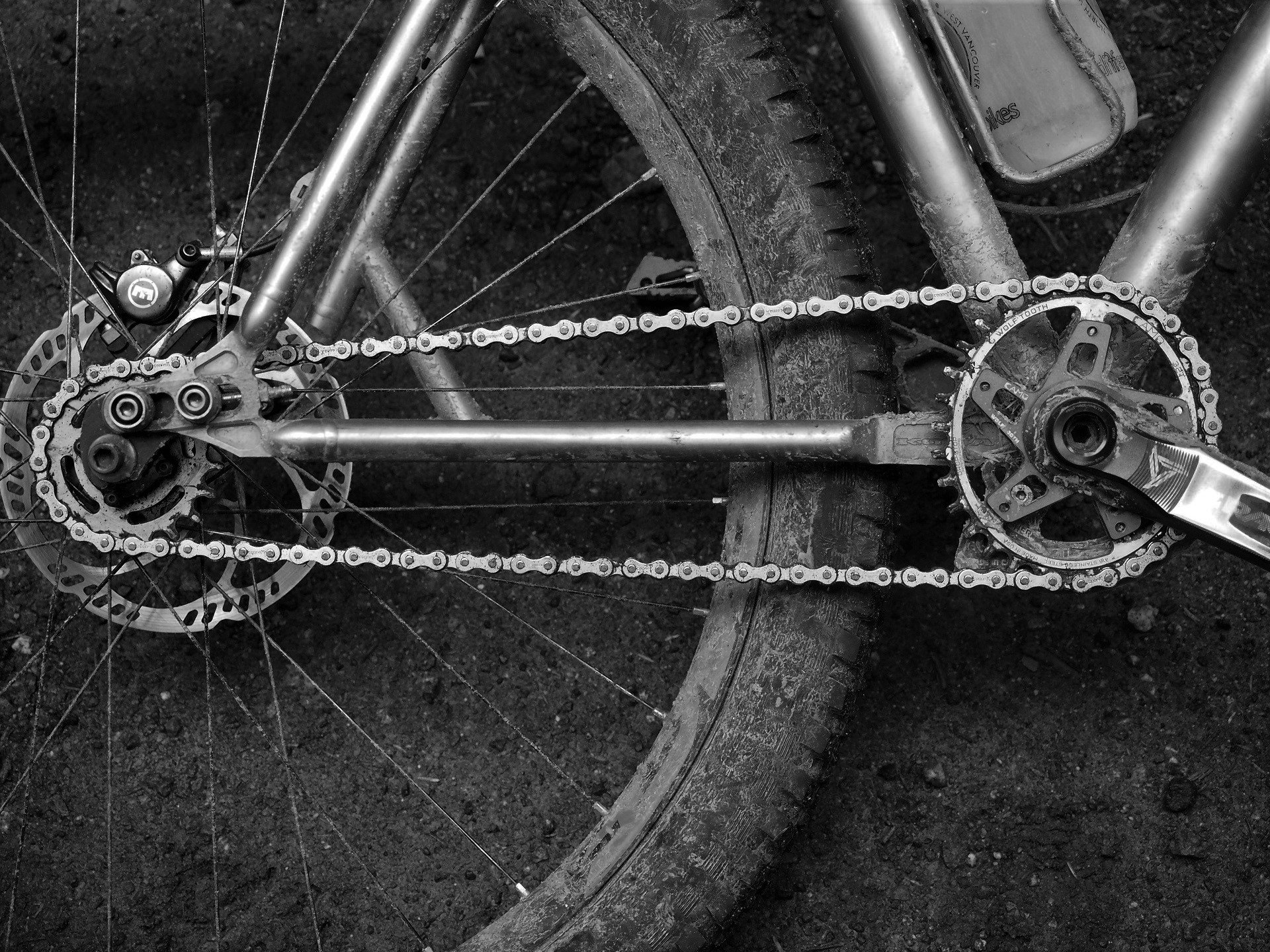 The chain is toast and the cog, closer to a year old, has been filed down a few times. The Wolf Tooth oval ring is like new. What's really impressive is it still interfaces perfectly with a multi-speed, 11/128" and 3/32", chain after tons of hours with a wider 1/8" chain. Even the impressive Renthal 1XR ring got to the point that it was perfectly serviceable for single speed use but no longer functional on a multi-speed setup.

Stainless steel is like most materials in the world (carbon, aluminum, cheese etc.) in that the term covers a broad range of raw material quality before any manufacturing takes place. I've ridden other stainless steel products, cogs and rings, that haven't lived up to my expectations but this 32t oval ring is impressive.

I won't argue; 100 USD is a lot of money for a chainring. At least it is for anyone who has been on the same aluminum narrow wide ring for a year with no issues. For the folks I know who are dropping chains on their worn narrow wide rings after six months the Camo system pays for itself quickly. 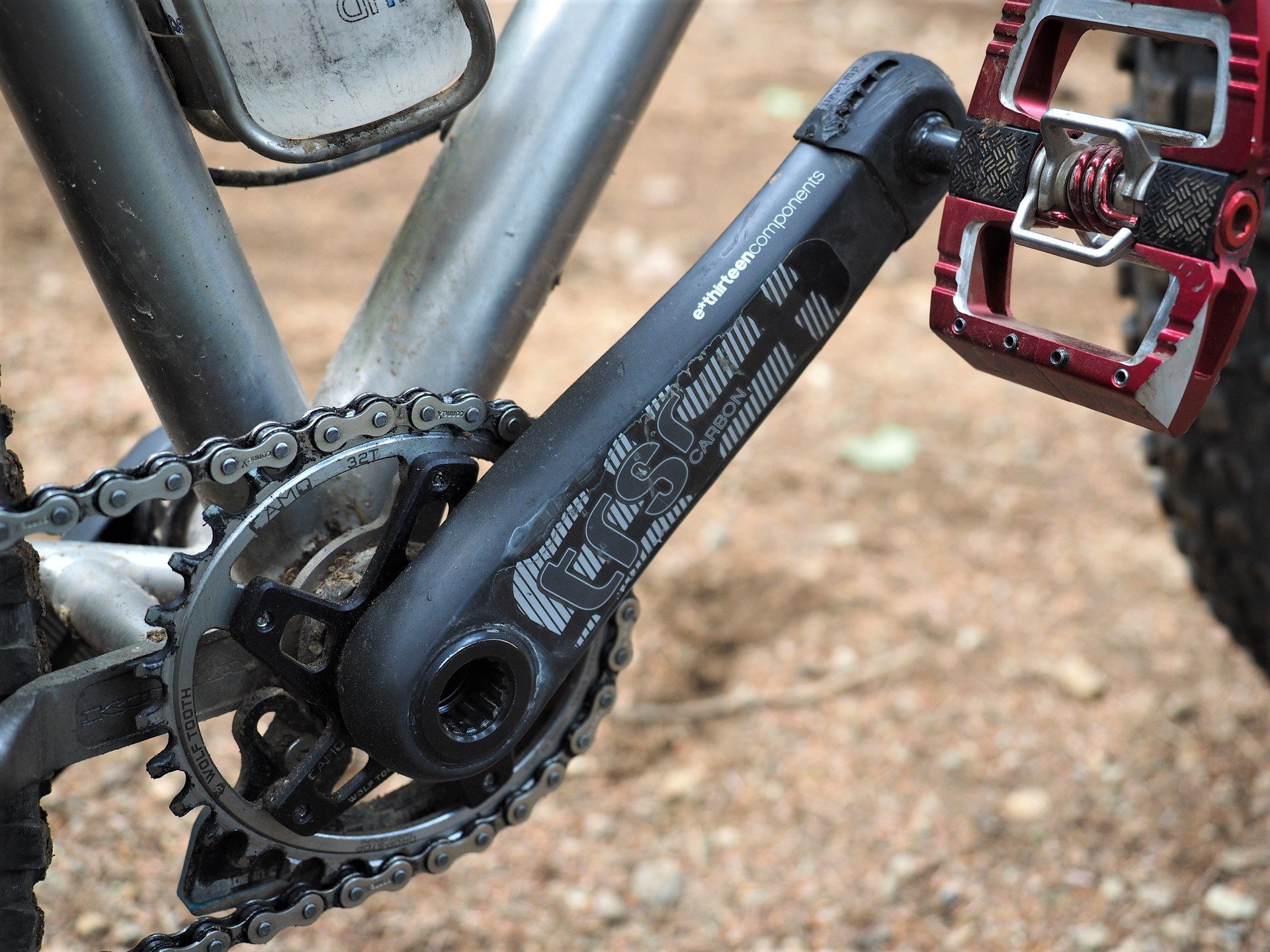 For my usage the Wolf Tooth Camo system would pay for itself in about a year and a half compared to a good quality alloy narrow wide ring. My expectation is that it will last much longer than that.

Each spider is 28 USD and weighs 32 grams or less. Being able to easily swap the ring between different direct mount standards matters to enough people that I think it's a legit feature. The rings cost 99 USD and weigh 90 grams for a 32t Oval. In other words they pay for themselves as long as they last twice as long as most companies' aluminum rings. As with most narrow wide rings I've tried the chain retention is excellent with multi-speed and track chains

"Being able to easily swap the ring between different direct mount standards matters to enough people that I think it's a legit feature. "

I know a lot of people who broke cranks this year - some under warranty / some not - who switched to another brand afterwards.

Absent a direct mount standard (to replace 104/4-bolt) I think the peace of mind of being able to adapt a $100 USD N/W ring, that should last multiple seasons, to any almost any non-Shimano crankset is a feature.

I guess, for me.... "I might break these cranks and replace them with a different brand, which I'll then have to purchase a different spider for" is sort of a stretch for a reason to buy this system.

I doubt there are many people who would buy the system for the ease of swappability - there’s always going to be someone swapping ratios between two bikes with different brand cranks but that will be a deep exception to the rule - but I’m sure it’s a feature anyone who purchased the system would appreciate if they did end up changing cranks for whatever reason.

So I do think it’s a legit feature but agree it wouldn’t be a primary reason to buy the system for most riders.

Apologies for the lack of clarity.

Apologizing for that is rather Canadian.

I was merely attempting to understand the statement.

Yeah well, the readership here is definitely above average when it comes to thoughtful comprehension so if the point isn't clear that's definitely on me.

I do appreciate the comment as that's the best way to improve my craft.

I would like to see OneUp make stainless oval rings.  Sold on oval, and I like their switch system, and I would like the longevity of steel.

@Andrew Major its been a few years now. What kind of mileage are you getting from the SS ring? Any problems?

I still recommend them to anyone who will listen but then I don't mind the extra weight and paying a bit more upfront for the excellent longevity. In addition to the original 32t I tested (which still works for straight chainline single speeding but is a bit worn for chain retention at bad chainline angles or with a derailleur rattling around) I also purchased a pair of 30t rings one on my Walt V2 and one on my cargo commuter. I just think they're awesome.

The 30t on my Walt V2 has only been run SS and it still takes a chain like new after a solid year on that bike along with a number of months on/off on my other SS before that.

Seems like we just went the long way around to get rid of spiders on cranks and simplify chainrings.

Given that we’re basically back at 1996 XTR I think it’s fairer to say we went the long way around to go back to removable spiders/direct mount rings.

I see we share similar experiences with the fox transfer remote. Fox should just include the wolf tooth remote with new posts.

I couldn't justify the increased cost of this system compared to a Blackspire ring so I went that way.  But the WTC products I've had have been good

I always got a great life out of Blackspire's stainless steel granny rings running 2x setups. It's too bad they didn't get into the steel N/W game.

No idea they did this.  Any idea why they stopped?

I don't know for a fact. I know that as standards have changed they've carved out a serious niche supporting chainrings - like 120mm bcd or 88mm bcd for examples - that came OE on tons of bikes for a couple years and then were just suddenly unsupported except at the very boutique level. They make great product that is high value.

They also sell a ton of flat pedals so it may just come down to machine time vs. return on investment (more expensive material and tooling costs and limited demand?).

stainless is the answer. to many questions. 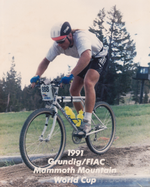 .... any updates to this? I'm a 220lb rider on a new SRAM DUB Stylo DM crankset driving an Eagle GX drivetrain. After only 700ish miles my stock 30T Eagle aluminum X-Sync chainring is already looking like it needs to go. How well does WT's stainless steel CAMO chainring work with Eagle?

I’m still pedaling the first ring I tested on my single speed and it still takes a chain for a multi-speed drivetrain which is frankly shocking. I wouldn’t even hazard a guess how many aluminum rings I’d be through by now and it’s been a few chains (don’t keep track).

I’ve since purchased a 30t and another 32t - They’re all I run on my personal MTB’s. Highly recommended.

Ordering now! Thanks for the quick reply...... much appreciated, and keep up the great work brother!

Not really specific to CAMO (which I am about to order and elliptical SS chain rings) but for information. I ran a SRAM XX1 Eagle Gold chain on an XG-1299 Gold cassette driven by a One Up Components 30T elliptical chain ring. After 1400 km the cassette is barely worn, the chain has just passed 0.5 so it is being replaced with a new chain, but the most significant and most obvious wear was on the aluminium chain ring which is chamfered totally smooth on the outside of the teeth.  The NW teeth are not hooked like the old '90 chain rings and cassette cogs used to get (even with regular, twice yearly changes) but really worn laterally. I think the SS chain rings will definitely be an improvement in this area.