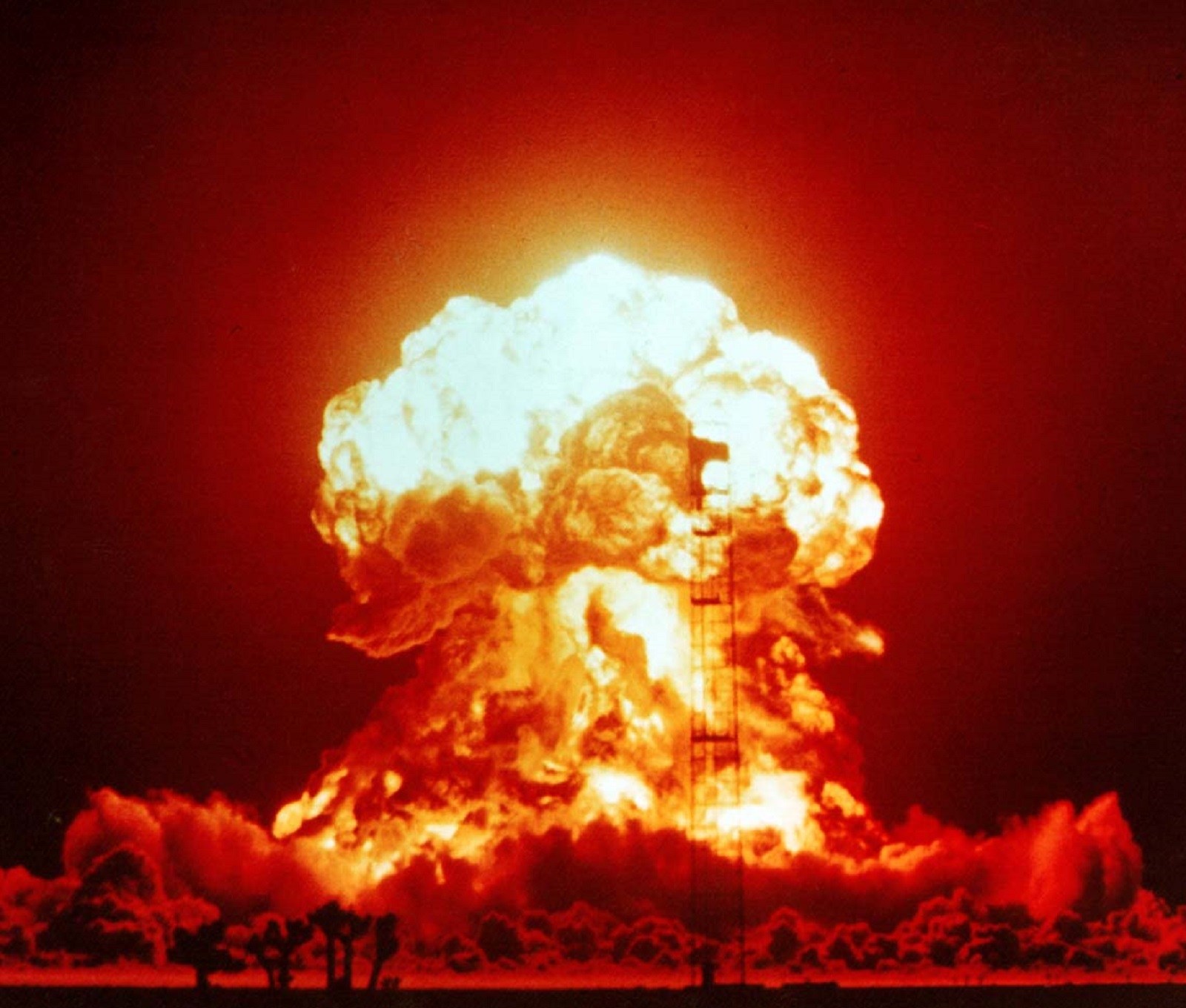 So what? Wolf Tooth has been making direct mount and 4-bolts rings for some time. Most every brand that offers a crank based around direct-mount rings (RaceFace, SRAM, etc) also sells a direct spider to run standard 4-bolt chainrings. How is this any different?

The guys at Wolf Tooth weren’t just sitting around one day admiring a set of 1997 XTR M950 cranks.  Sexy machining and plethora of mix-and-match anodized colours aside, Wolf Tooth’s Camo mounting system is a case of form follows function.

Due to popular demand they started manufacturing their direct mount Drop-Stop narrow wide rings using stainless steel. Durable as… Expensive as… Heavy as… With their Camo mounting system they aim to deliver all the durability of their stainless Drop-Stop direct mount rings in a package that is notably lighter, equally stiff and durable, and significantly less expensive over its lifetime because the wear item (chainring) is much cheaper to replace. 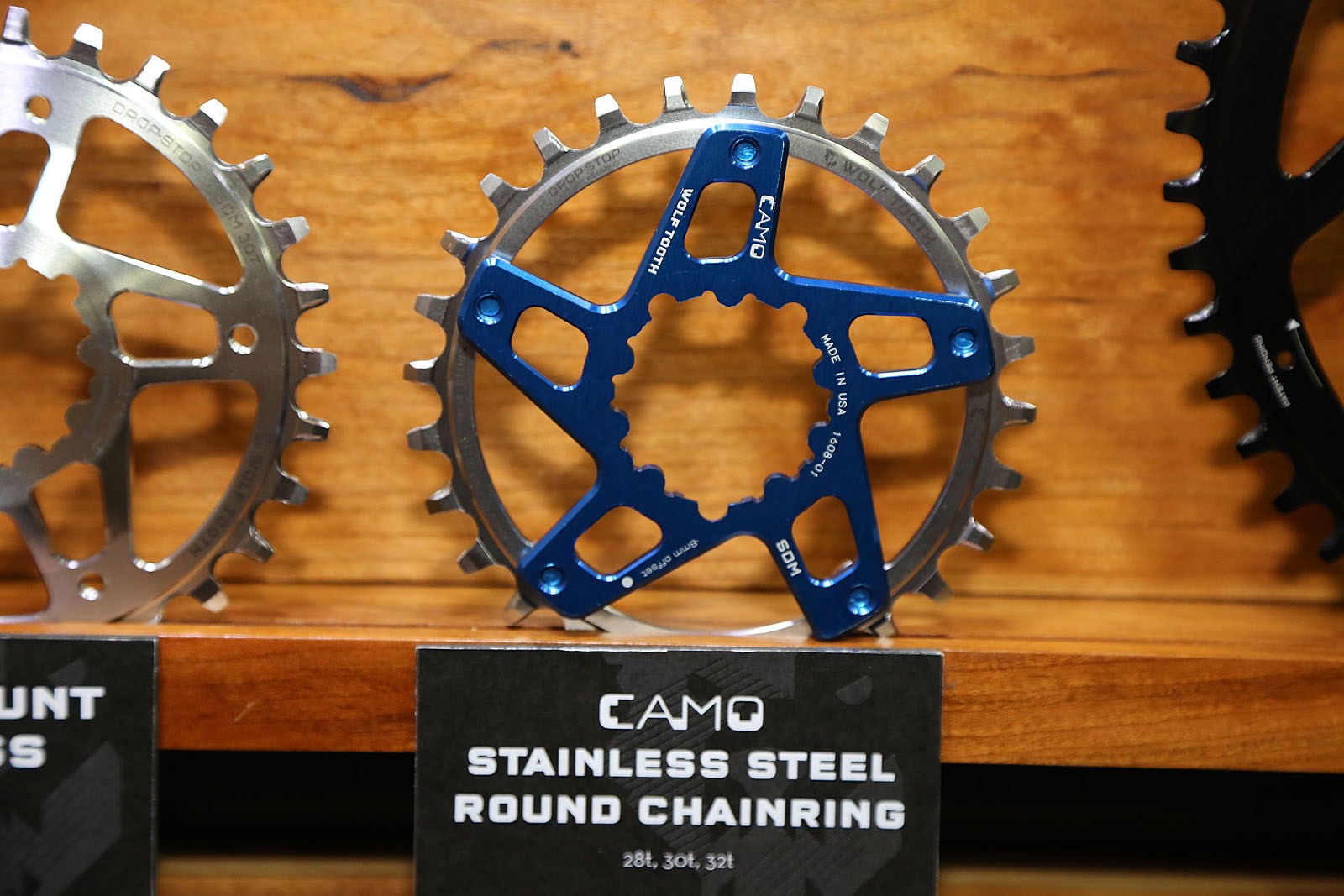 The Wolf Tooth Camo mounting system aims to deliver all the durability of their stainless Drop-Stop direct mount rings in a package that is significantly lighter, equally stiff and durable and significantly less expensive over its lifetime because the wear item (chainring) is much cheaper to replace.

Where Camo is significantly different from a standard bolt-on chainring & spider arrangement is the interface. The chainring slides onto posts on the direct mount spider, which in turn absorb all the energy from pedaling.

The five alloy bolts thread into the spider and they just hold the chainring in place rather than taking all the load of a standard bolt & nut configuration. 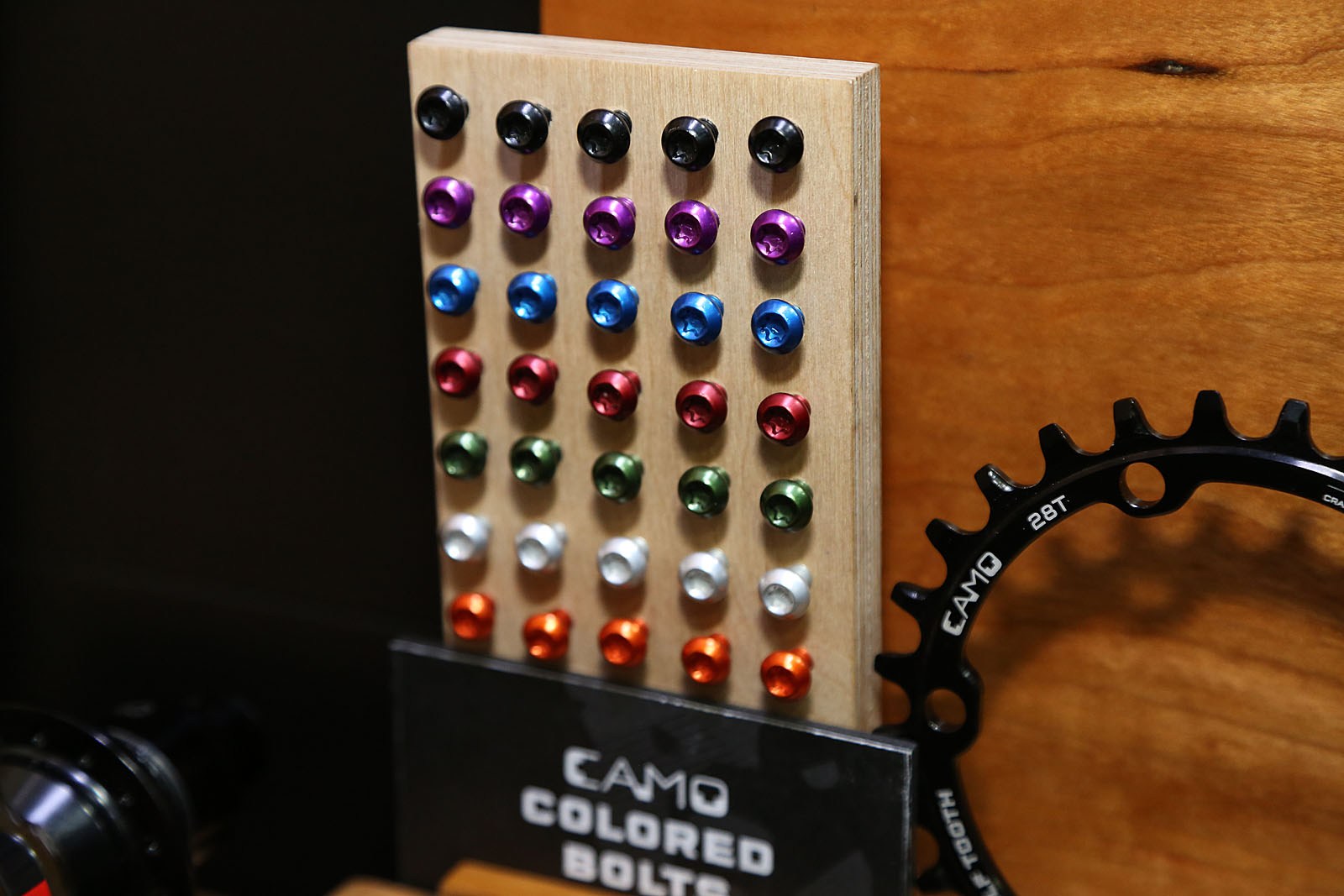 Mix and match the anodized alloy bolts of Wolf Tooth’s Camo system. The chainring sits on posts on the crankset spider which absorb all the pedaling forces.

Wolf Tooth is making Camo spiders for SRAM, RaceFace, and Cannondale cranksets. I’m sure when Shimano starts offering removable spiders again in 2018 they’ll make a spider available for those too. A stainless Camo ring is almost twice the initial buy-in of the alloy Camo option. If you don’t mind a few grams it should last more than twice as long. Pricing for all the Camo system product is here.

While almost everyone racing mountain bikes has been chasing the thinner is better mantra, Wolf Tooth’s Dan Dittmer, and a lot of bike packers, have been experimenting with ways to get more all day comfort. Especially on rigid bikes being taken off the beaten path. But on their mountain bikes too. 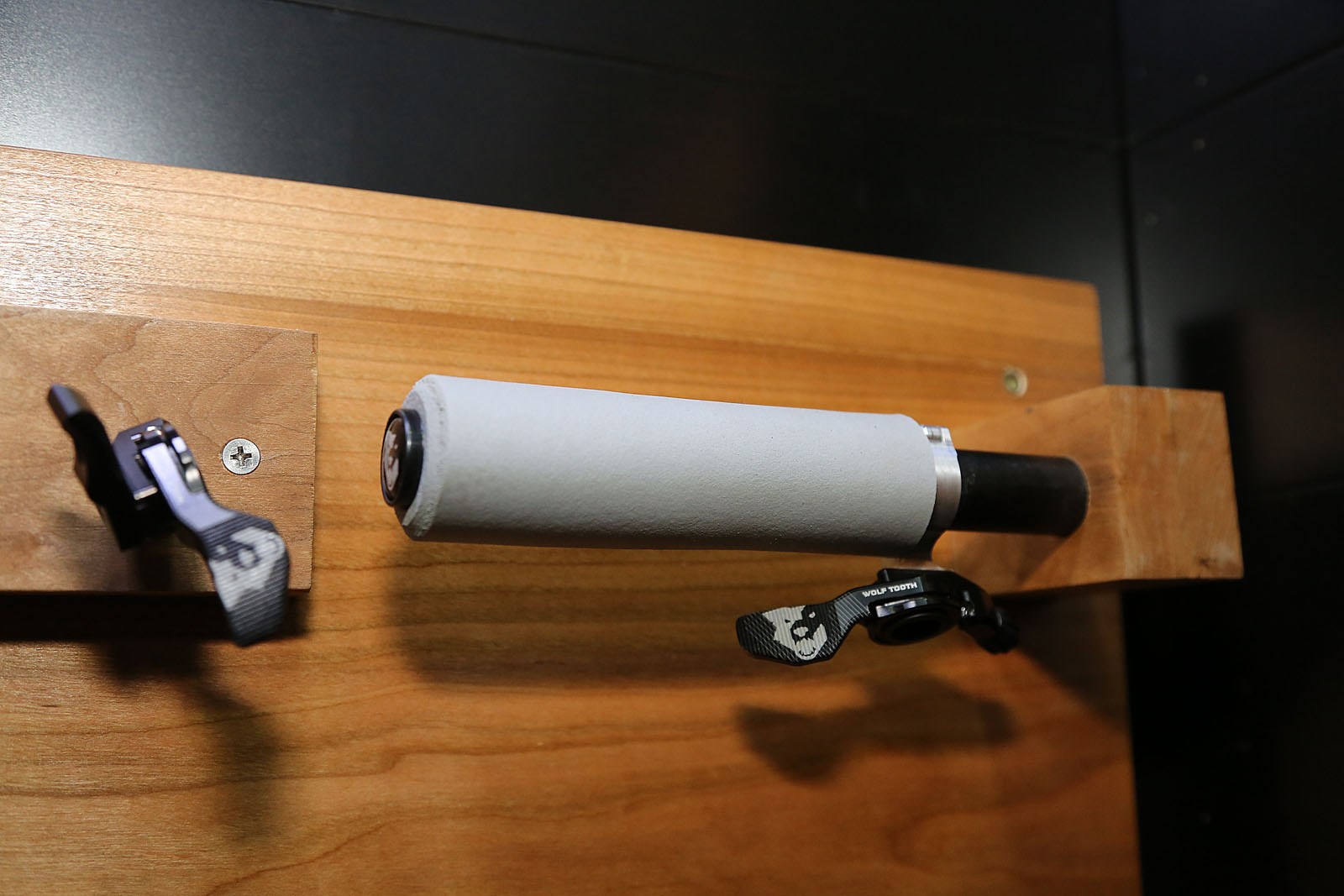 Wait, are fat grips back in again? There are at least two people who don’t give a F*** if they are: Wolf Tooth’s Dan Dittmer and NSMB.com’s Fergs. Oh yeah, they’re also making a dropper post remote that works on its own, with Shimano IS, or with SRAM MatchMaker.

I’m not a fan of fat grips but I have to say the Fat Paws are soft enough that they feel much narrower than their massive 36mm outer diameter would suggest. I’ve tried both Red Monkey and ESI’s silicone grips and wasn’t a fan but on my all day adventure, trailer puller, road, gravel, and light off-road bike I could definitely enjoy the much more forgiving Fat Paws.

Fergs on the other hand was willing to do whatever it takes to get a set. If you like a more generous grip definitely check these out.

Actually they are making a conversion option to convert a growing collection of hubs for use with Boost spacing. $25 (USD) front and $40 (USD) rear along with a wheel re-dish and your existing hoops are ready to be mounted on any Boost (148×12 / 110×15) bike. 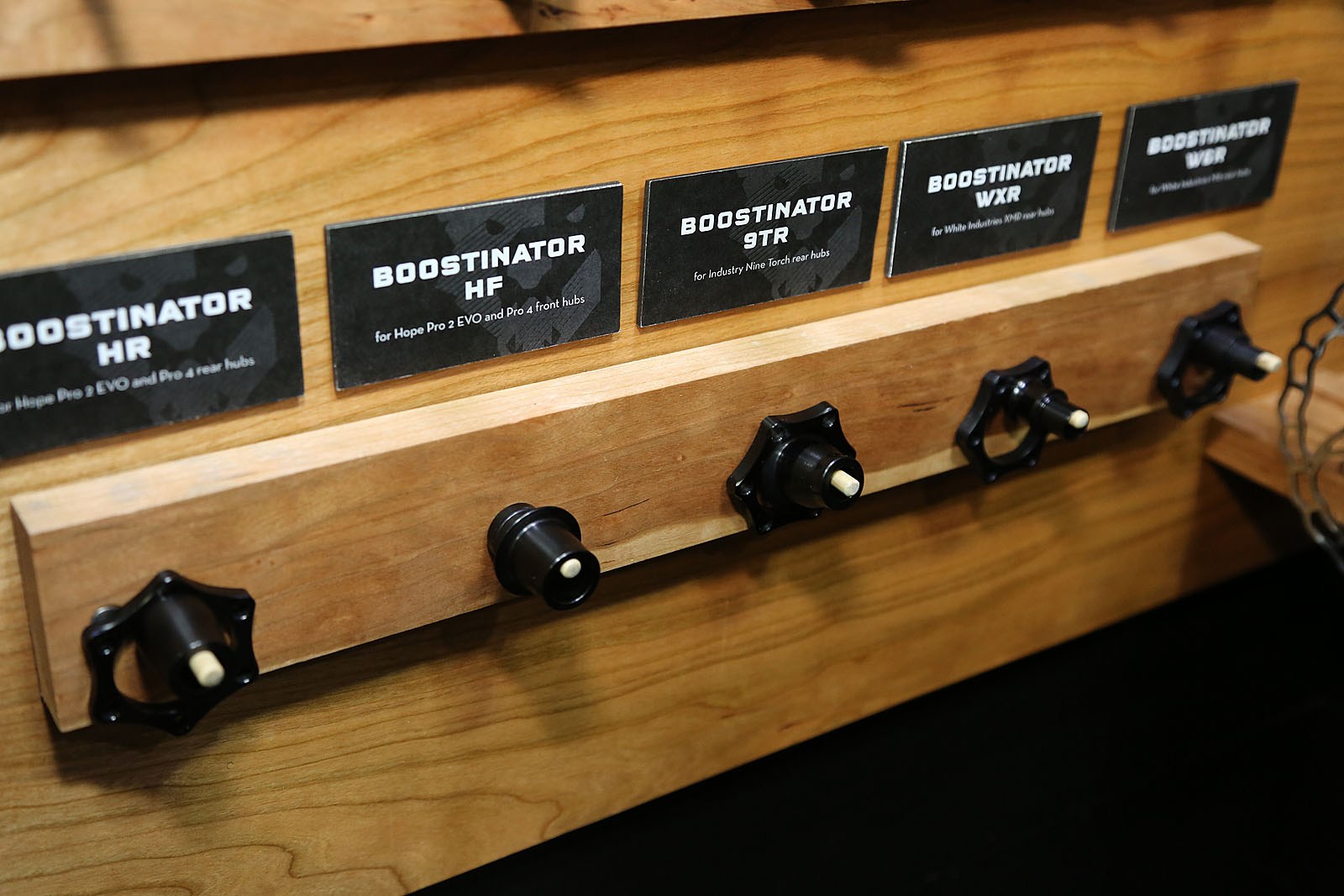 Currently Boostinator spacer kits are being offered for select Industry Nine, DT Swiss, Hope and White Industries hubs. There are A LOT of higher end wheels (Roval, Bontrager, Giant) using DT Swiss guts so with no guarantees it is possible that Boostinator also works as a conversion for some of those wheels.

Depending on demand I would love to see Boostinator released for more common hubs using similar interchangeable hub spacers (Stans, Mavic, etc). For me, the system shows how easy it would be for any company to make conversion kits to Boost to keep customers on their high-end hub sets rolling with forward compatibility. Even for Chris King it’s as simple as a new axle, a rotor spacer, and a wheel dish to make any 135/142 hub into a Boost hub.

Five Bolt Chainrings! Why doesn’t every high-end hub brand offer a Boostinator kit for their hubs?

Thanks for the kind words Andrew!

We share a lot of riders' frustration with the transition to Boost- especially as 148mm rear triangles become the norm for some companies' warranty replacements. We're always listening to those whose hubs aren't supported but there are a couple of brands' whose hubs we could have sold a good number of kits for but didn't lend themselves to the sort of end cap replacement that makes the Boostinator cost-effective. DT, I9, Hope, and White Industries have done us all a favor by keeping their hubs fairly consistent over the years, making a Boostinator for those companies an easy decision.

At Interbike, we also introduced a dropper remote that doesn't suck:

We have a list of about ten things that set the ReMote apart, but the biggies include a 21mm cartridge bearing pivot, low-cost breakaway pivot axles, easy access at-the-bar cable fixing, and optional integration with Shimano and SRAM/Avid brake levers. It'll work with most cable-actuated posts on the market and is a great choice now that the Fox Transfer can be had without a lever.

Thanks Marc. It is also amazing(ly ridiculous) how many higher end bikes come set up with 1x drivetrains but the non-ergo (front shifter compatible) remotes in order to save a couple bucks OE.

Every stock 1x bike with a KS dropper post I road last year had that setup.

It could also be a great upgrade for Gravity Dropper. Awesome posts (function, durability, longevity -- I know they aren't pretty) with awful remotes.

Good point re. Transfer that can be purchased sans remote.

Re. Boostinator. Would it not be possible to make a - albeit a bit less factory-clean looking - universal add-on end cap since the OD is universal between hubs?

Basically a 5.5mm spacer (to take up Boost spacing difference) with a lock-on sleeve that slides over the existing axle or end cap of any hub.

Drew,
The short answer is "not really." In order to build the sort of product that we can stand behind, there was really only one option: to evaluate each hub and provide hub-specific solutions. There are others attempting one size fits all solutions, but they're all less than ideal and as we couldn't possibly control all of the variables weren't something we were comfortable building or supporting. To say nothing of what product liability insurance would cost.

Sorry not to have better news, but we need to feel comfortable with and be able to stand behind our products- and that's not an approach that we felt we could do that for.

I have actually been looking at this lever as an option since I broke the original transfer level. Do you have any experience with the match of WT lever to transfer dropper? I am concerned because the end of the cable with the cable stop is different for a lot of droppers.

Andrew,
I'm running the Transfer/ReMote combo on my tail bike for the past couple of months and really like the feel. Fox went with a firmer action than a lot of other posts, which carries over, but in exchange you get excellent feedback. In contrast, a KS feels a bit light to me now.

I think you have me sold. I love the goat link solution!

That remote though! Would purchase.

If your into the Fat Paw and have really big hands or like more purchase on your grip, Wolftooth also has the Fat Paw XL which has a 160mm lenght.

Have you tried the grip? Just curious to get some real world feedback.

Fergs was doing a happy dance and Dan from WolfTooth is obviously quite stoked on them. I have Trumpian hands but I think they would be awesome for a few of my "I'm glad he's not my doctor" mountain biking friends.

I bought the Shorex 36mm silicone grips. Hated them. So soft that they just squish to nothing when you squeeze them. And they don't provide any grip when wet. They're incredible really.

I guess this is the solution to the industry not being able to agree on a direct mount standard? I'm happy to see stainless steel rings - the wear on aluminum ones is pretty terrible, particularly if running smaller sizes and/or you're heavy enough to really be torquing. I would have loved to see Race Face DM steel rings but I guess the economics just don't work…

Is stainless steel particularly stronger than the type of steel we used to see grannies made of? You can still buy a 32t steel granny on CRC for $23.

that narrow wide life tho

Clearly NW is better but it's possible to make an inexpensive steel chainring. Is it that a narrow-wide tooth profile can't be made by stamping (which I assume is why those old grannies were so cheap)? Weren't the original RF Turbines made by forging and then some machining to finish? I'd be curious to know more about these processes. Does anyone play a metallurgist online?

I suspect the machining vs stamping is a large factor. But a lot of things that are new and shiny in the bike industry are simply more expensive with limited reasoning besides shiny

Well at least we're back where we started.