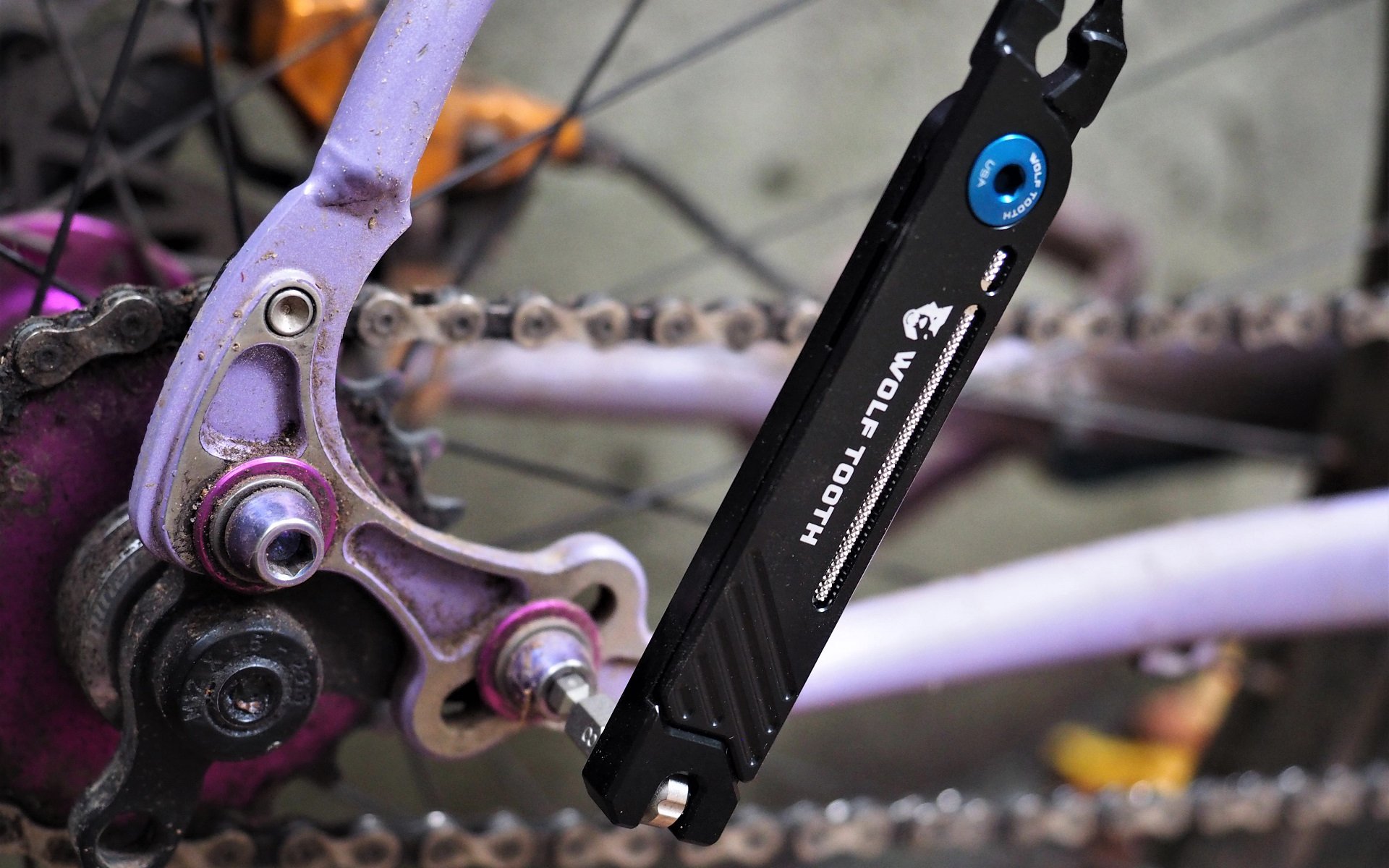 I know, a broken clock is right twice a day but I still did a little happy dance when the 8-Bit Pack Pliers arrived. When I tested the Pack Pliers in 2018, I couldn't help but wish they had combined a 1/4" driver to get that much closer to the perfect, lightweight, all-in-one for my pack:

In my perfect world, Wolf Tooth would manufacture a more multi-functional tool using the Pack Pliers platform. My version would have a 1/4" bit driver which would allow riders to carry as few or as many individual tools as they like.

It's true that the new 8-Bit Pack Pliers do not use a 1/4" driver, but rather shares the same bits as their excellent EnCase in-the-bar toolset. This setup allows the driver itself to be an 8mm hex with a 4mm opening for the other bits. Combined with the handle of the Pack Pliers the 8-Bit tool creates a healthy amount of leverage. You aren't getting DUB cranks off with it - but then you probably aren't getting DUB cranks off without tying the non-drive arm to your chainstay and strapping your full-sized 8mm to a cheater bar - but there's plenty of leverage available to tighten Race Face Cinch, SRAM DUB, or any other similar crankset.

For anyone concerned about the durability of the aluminum handles, or the swivel mount of the 8mm head, Wolf Tooth says the tool is designed to withstand more than 40 Nm of force. This is not just intended as a 'sometimes tool' for the trailside, they'd love to see it being used as a daily driver in your home shop. The swivel head allows the tool to be used like an L-Handle hex key or like a screwdriver which I find very handy. 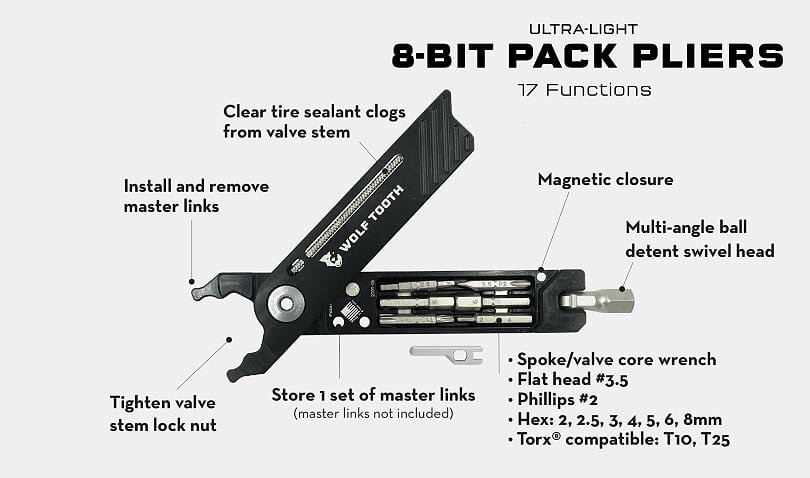 All the features in a beautifully made, very usable, 67-gram tool for an investment of 70 USD.

As with EnCase, there is a magnet inside the swivel head to keep the bits in place. All the bits are the same. There's also the addition of the Valve Reamer AKA rasp for clearing dried sealant out of your tubeless valves. Here's the litany of features:

I tried fairly hard to think of what's missing. Some folks will lament the lack of a chain tool but not me, I just snap off the remains of a broken link and install a quick link. [Edit]: I learned today, thanks to trying to make a How-To for the comments below that this only works for the 1/8” chains I usually run on my single speed. With the flaired pins on a mulit-speed 3/32” chain a breaker is still needed to avoid a long runbike home. [/Edit]

I suppose someone who was being really persnickety could ask for a few more Torx options or a 1.5mm hex, but the only separate tools I've added to my kit are a carbon-rim-friendly plastic tire lever, which I'll remove after my Bontrager Line test is finished, and a knife. I'm not sure how Wolf Tooth could best add a locking blade to the 8-Bit and if it wasn't truly usable it would be a drag on the rest of the tool, but they are smart folks and I'd love to see their take on an 8-Bit + Blade. 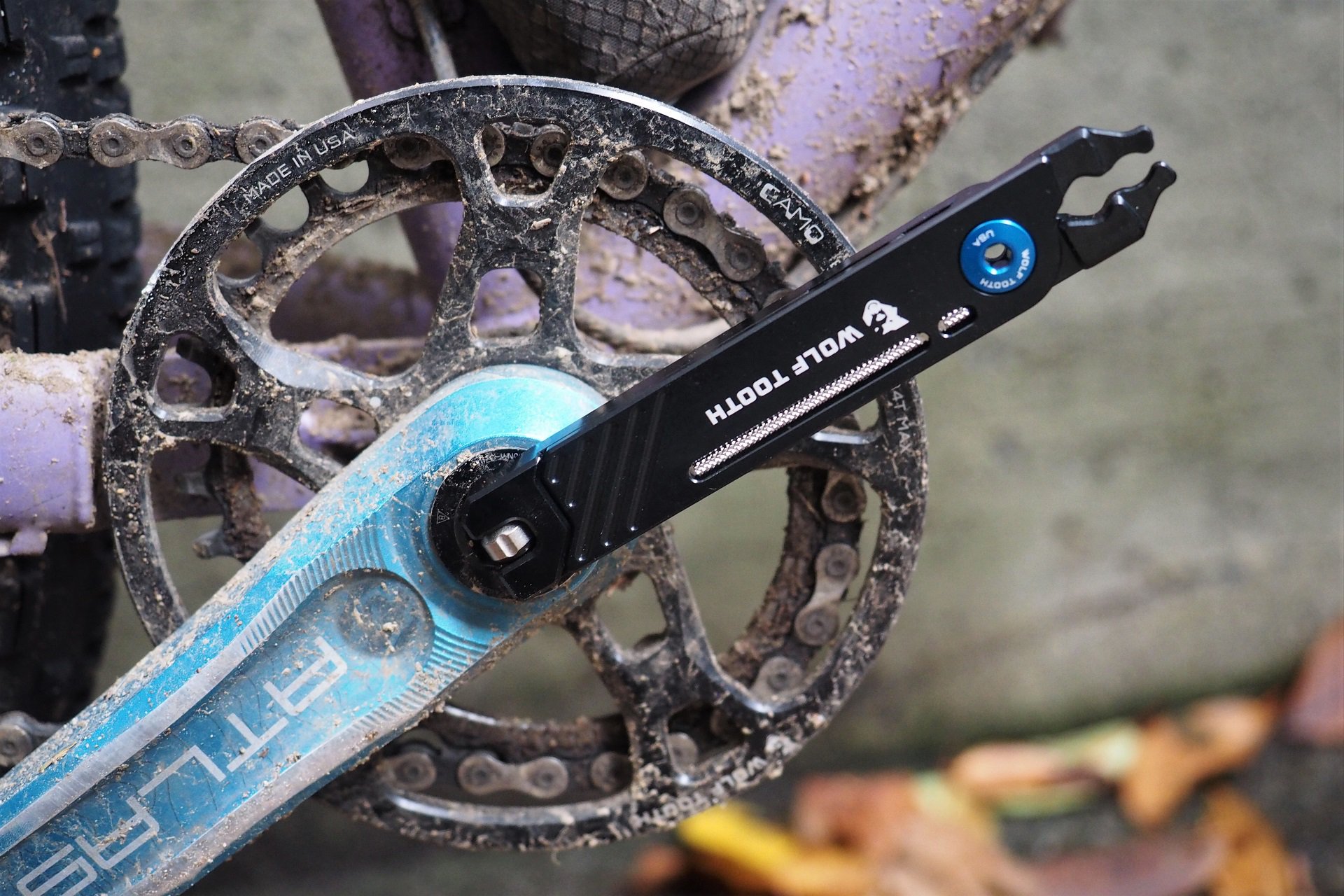 Plenty of leverage. The steel 8mm hex swivel driver and 7075 aluminum handles can handle over 40nm of force. 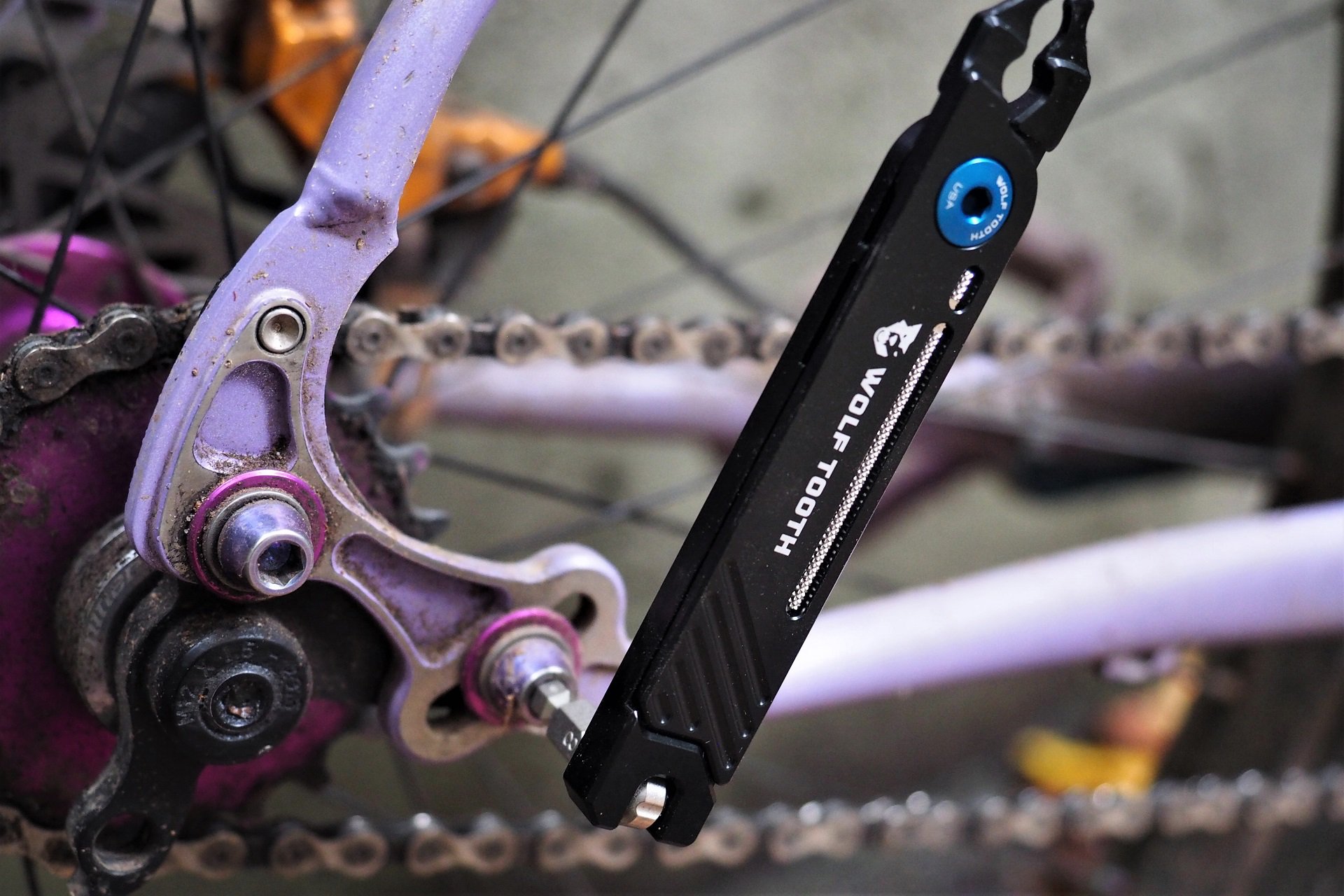 Adjusting my swingers with the 6mm is a joy. This is one place that most little multi-tools are useless. 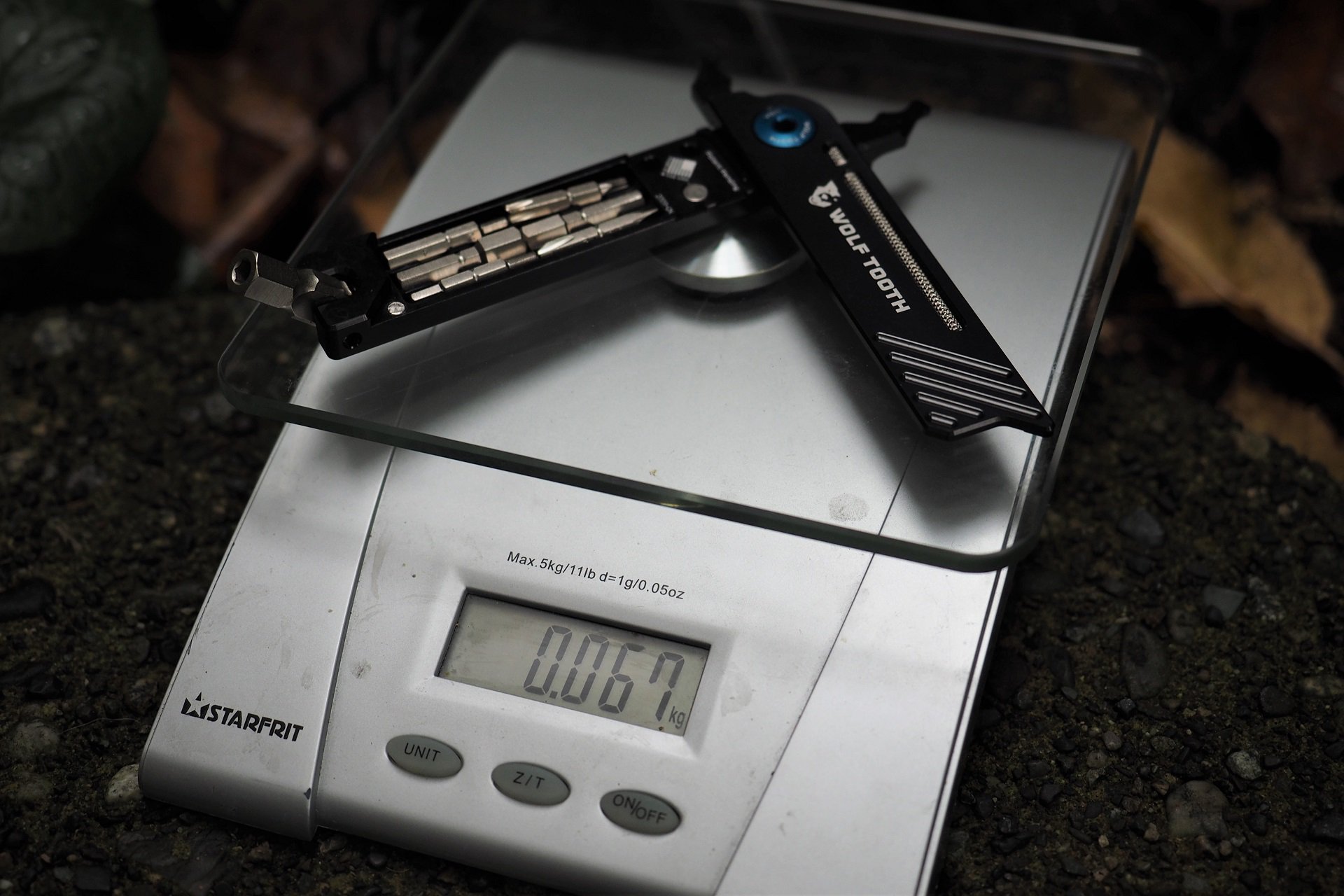 All the tools are easily accessible and held in place by magnets so it's silent and secure. 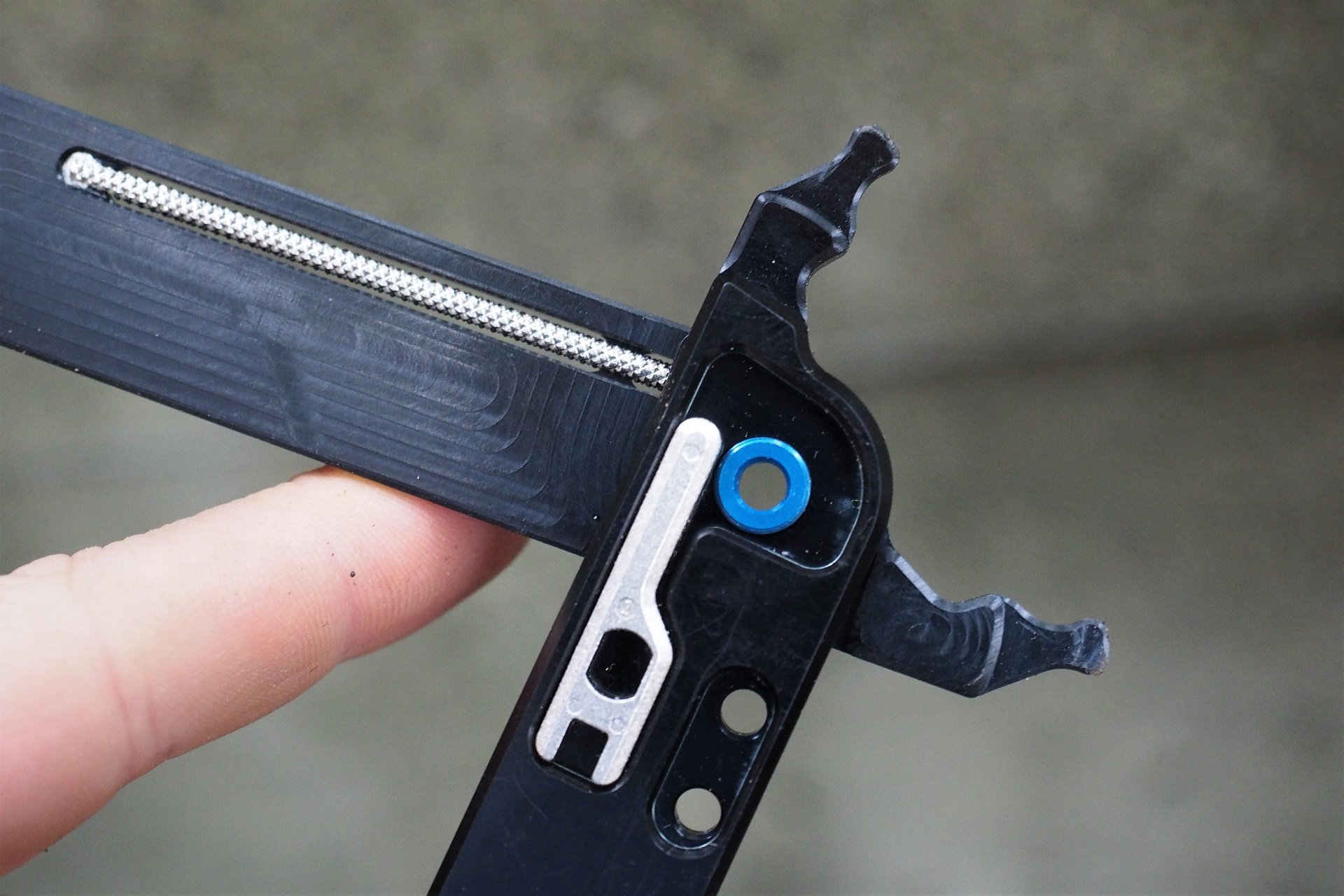 The spoke wrench and valve tool hidden away. 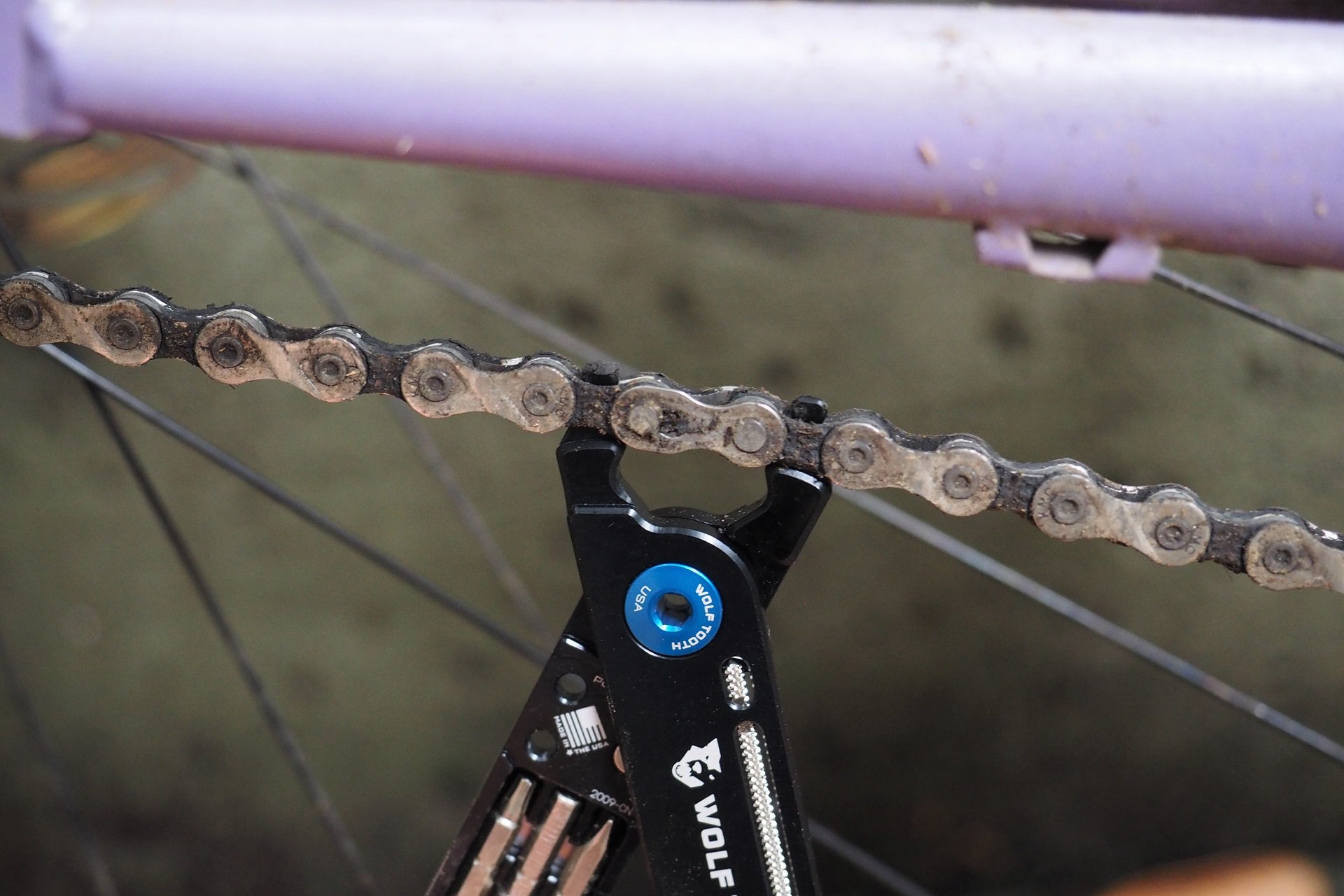 Of course the function of the Pack Pliers is identical to the originals. They're nice to use even with a filthy chain. 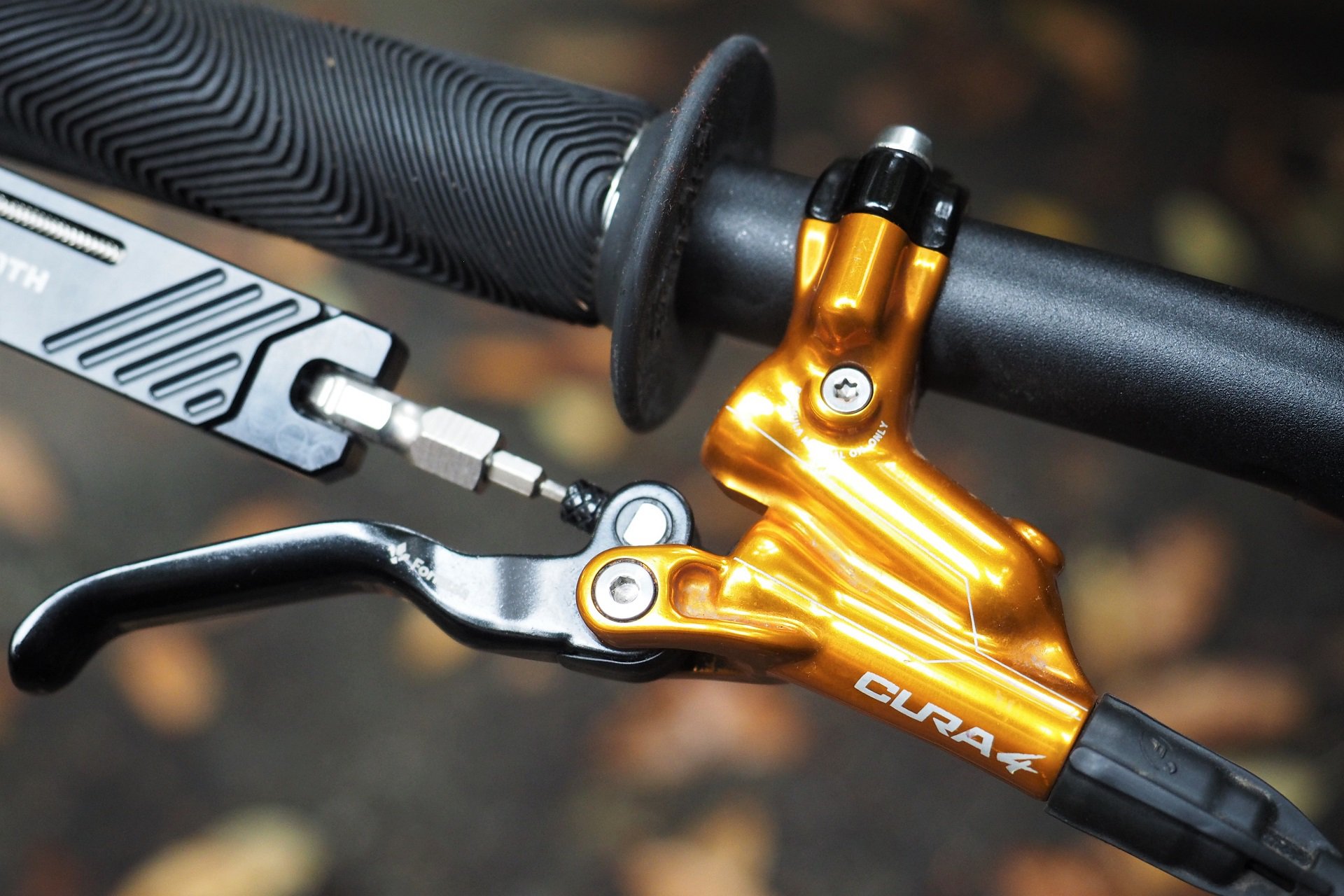 The swivel head makes getting little bits into hard to reach spaces doable. 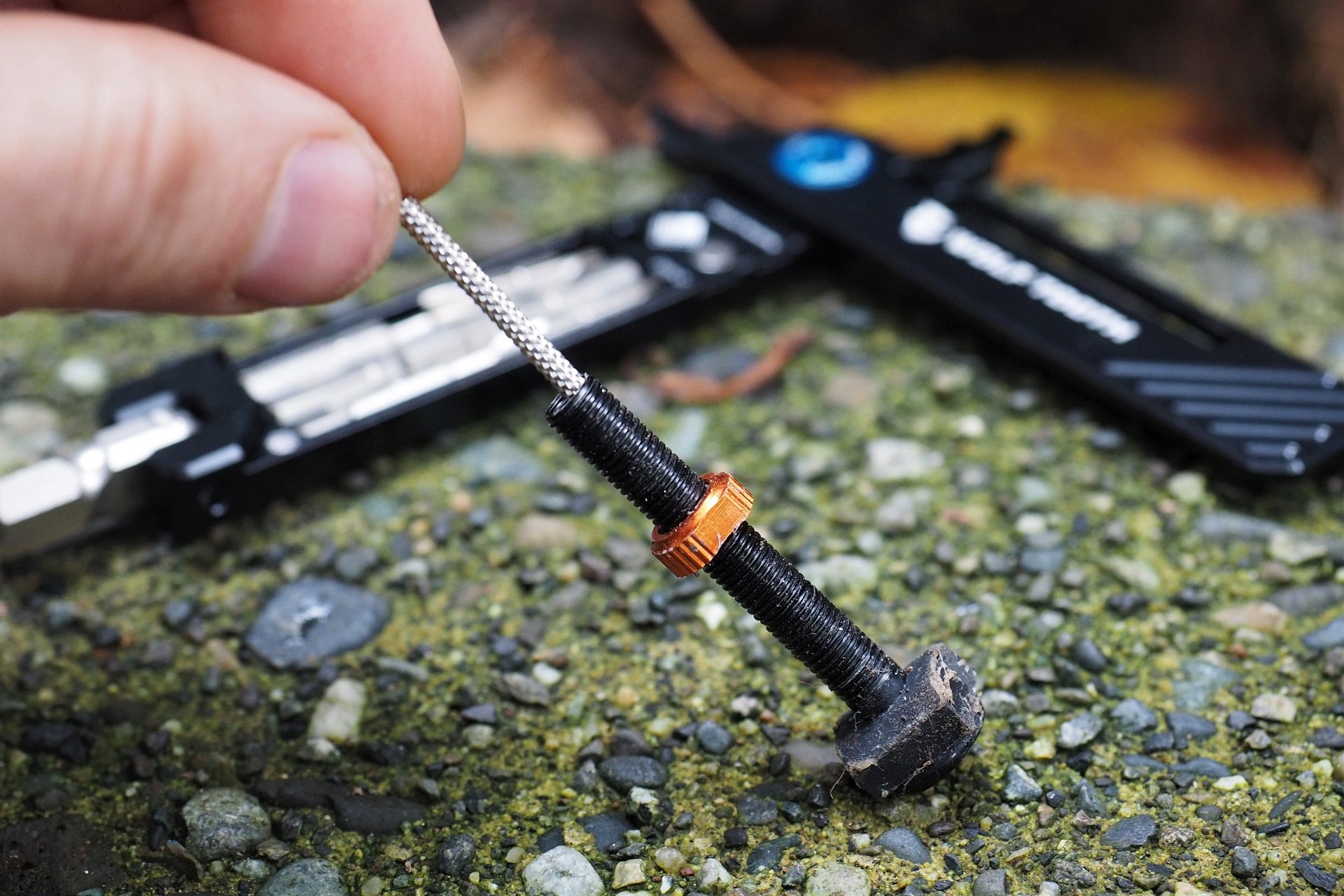 The valve reamer seems to work. I haven't needed a tool like this on the trail before. 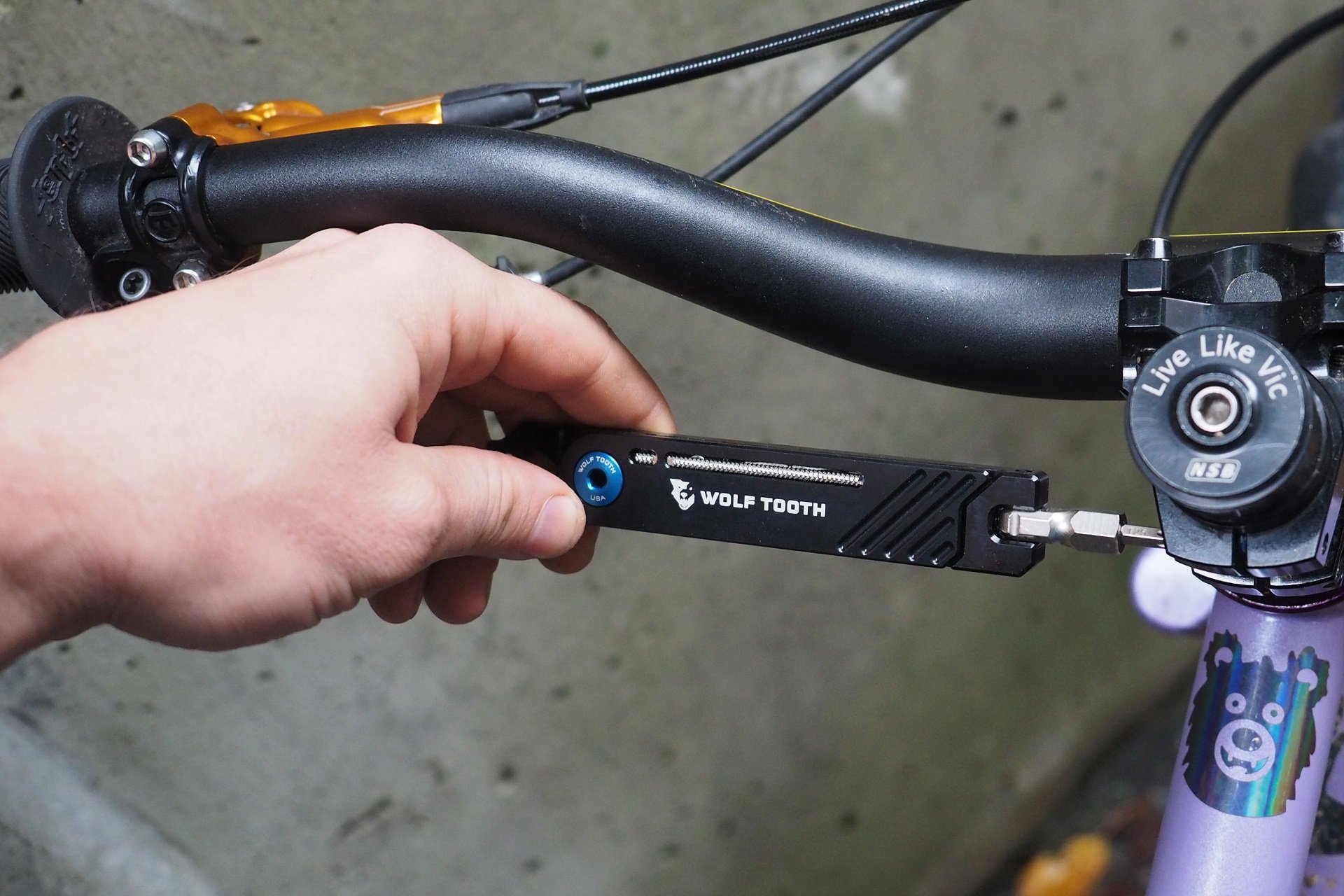 I really like tightening bolts in the 'screw driver' position and then swiveling the tool to torque them down my an 'L-Handle' H-Wrench. 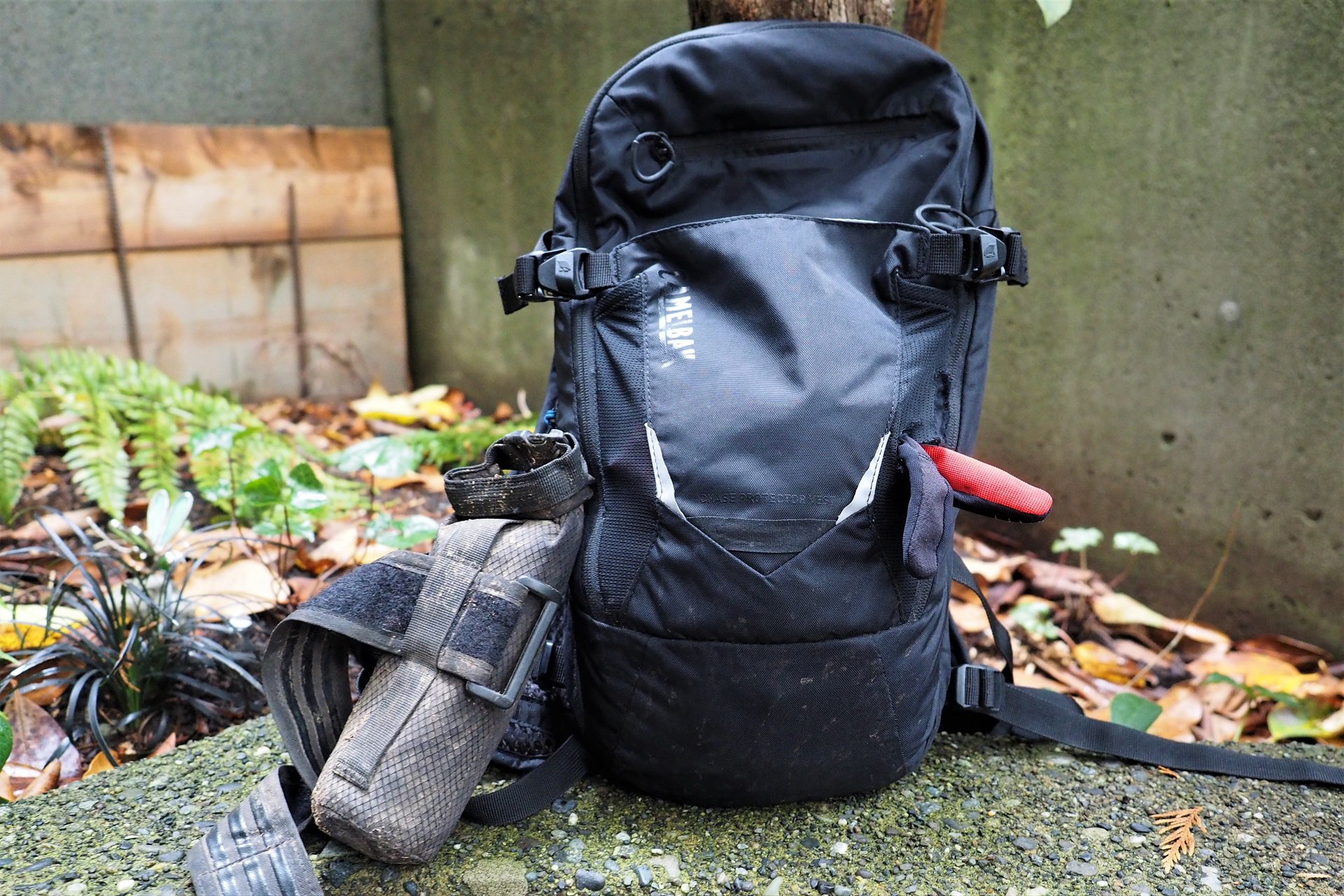 Running without a pack, I usually just toss the 8-Bit in my frame bag. But then, usually this time of year I wear a pack every ride. Yes, my Chase Protector Vest had a run-in with a tree - it still works great. 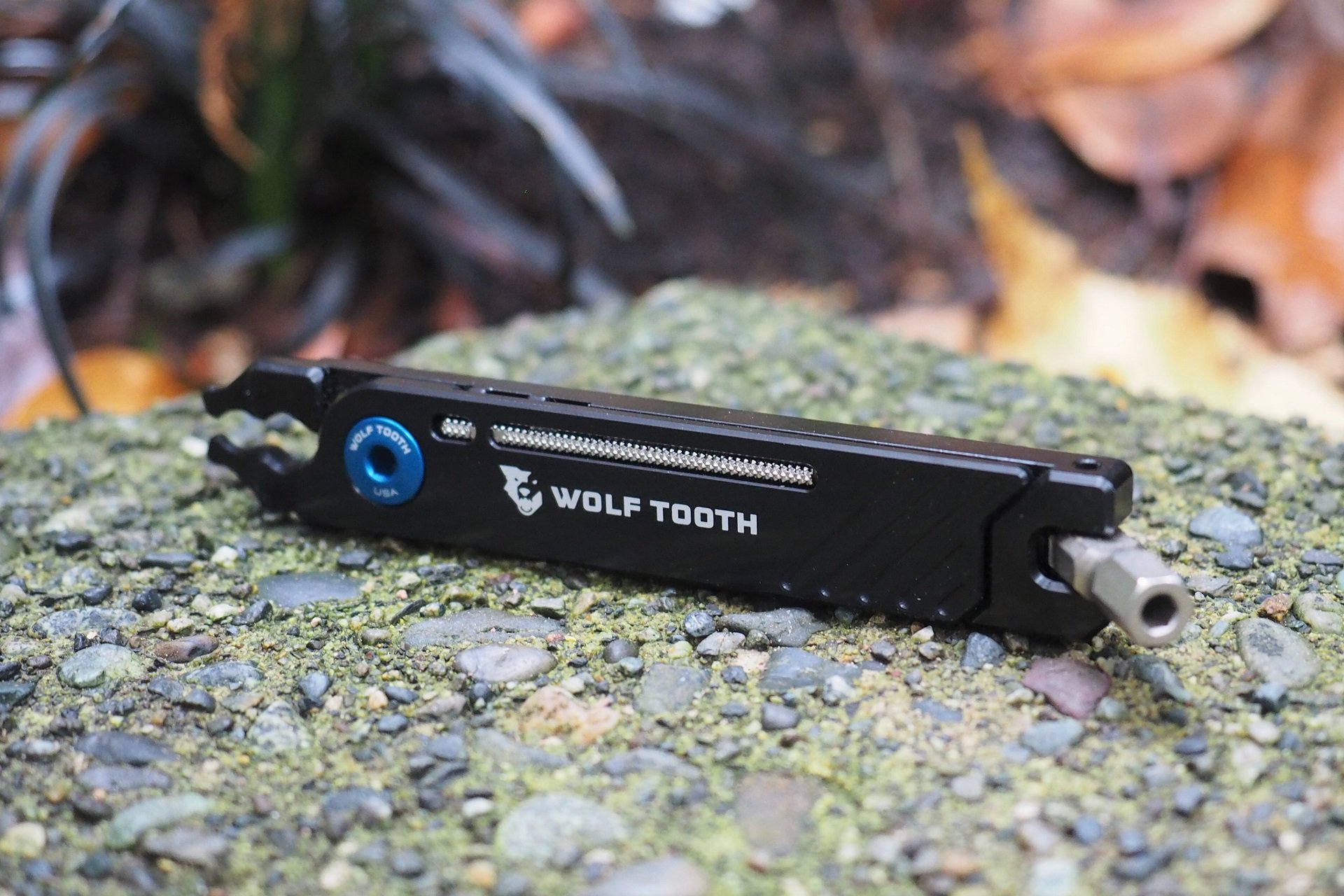 It's really the only tool I need on the trail. I also carry a set of tire plugs and a pump, that I haven't used in forever, and a folding knife that I use regularly.

Whingeing about what a 'fair' price is aside, the only negative I can come up with is that the bits are a bit finicky to use with heavy gloves, but then I generally remove my gloves for anything I do trailside other than straightening a stem so it really isn't a big deal to me.

The tool is beautifully made and very nice to use and it probably doesn't come as any surprise that it's an investment at 70 USD. I'm not trying to convert the 'my basic multi-tool is all I need' crowd but if you like nice things, and would prefer a shop-level tool experience on the trail then the 8-Bit Pack Pliers are likely right up your alley. They would also make a great gift for the rider in your life who already has everything, which I suspect Wolf Tooth is aware of given the November release.

The 8-Bit Pack Pliers will be available soon in your preferred local bike shop, and can currently be researched more thoroughly, or purchased, on their website.

Coming Back To Bash Rings (With Wolf Tooth CAMO)

This tool looks pretty rad, but I don't quite get this:  "I just snap off the remains of a broken link and install a quick link".  How do you get the chain pin out on the side of the link that isn't broken without a chain tool?

I apologize if this isn’t clear - I think this is what you’re asking - usually when I break chains (not that it happens that regularly) or see broken chains one of the outer links have snapped has snapped and the other gas popped off the chain pin, or more often the outer plates are bent/splayed and otherwise intact.

I use the pack pliers to flex/snap one of the broken/splayed outer plates off the side that isn’t broken and then that pin slides out as well leaving me two inner links to join.

If it would be helpful I could fake some photos! It’s surprisingly hard to explain clearly.

Ya I’m curious about this too. Would be good to remove the need for a chain tool.

Well, this is a very embarrassing defeat to admit to but I suppose I should be grateful that you folks potentially saved me a long run bike out of the woods.

My demo shots were going great - easy to snap the outer link off one side with the Pack Pliers as before, but as any idiot (aside from this one apparently) will tell you multi-speed chains have peened ends on the rivets and it is not at all easy to push them through the center links even once the outer links are off.

It’s no problem with the 1/8” chains I usually run on my single speed (confirmed with a KMC and a Wipperman chain) as once one plate is off the other slides out with the pin; however, as of yet I have not found a way to make it work with a multi speed 3/32 chain.

So yeah, sorry to get your hopes up. Still need a chain breaker unless you’re switching to #1FG

Cool, thanks for doing the homework! So, now they just need to add a chain breaker, and it would be a pretty swanky all-in-one.

I’m working on something. Will report back.

I have carried a small Park chain breaker for years. Very nice to use over a fiddly multi tool one.

21 USD OneUp Chain breaker and a longer chainring bolt. Just need to make sure the bolt is threaded all the way to the head for everything to play nice.

Everything works nice whether the chain breaker is on there or not. Since it came up on Instagram, I cut a bunch of fresh sections of chain before posting this (didn’t care to be wrong twice).

No, there is not a handle for the breaker. I wrap the chain around it to create something to hold onto. Presumably a production version could have a fold out handle, or use the p.pliers as the handle and have a fold out driver.

A man truly dedicated to his craft.

This is truly creative.

I like that you played the long-con on this one. Didn't bring up single-speeding until the comments.

Hahahaha. Trying to make sure you can’t fill up that Major Bingo card too easily.

I want to love the wolftooth plier so much but I have a lot of difficulty using them to separate links as I find the are so thin compared to the leverage needed and it really aggravates my hands. Maybe I want thicker gloves or something - I often pack the park quicklink pliers instead.

Interesting. Are you running Shimano chains by any chance?

I use the Pack Pliers as my home shop quick think pliers. They are a bit harder to use than the steel Park ones at work but not to the extent that I’d buy the Park ones for home or carry a heavier tool in my pack.

yeah, I do hate the shimano linkage system - I think this may be it.

The Shimano quick links are pretty brutal compared to others on the market.

Maybe that explains it. Haven't found the original pliers to work that great (w. Shimano links.) They sure look cool tho,  which is why I bought them in the first place, as these ones do also.  At home I grab the Park.

Problem is on the trail is little bits falling and getting lost. Probably will stick with my Crankbrothers M17 for now. We is late tech adopter.

But yeah, I still have an SKS Toolbox Race from forever ago and it gets the job done beautifully. I was actually using it for a while this year combined with a separate chain breaker (just the breaker and plastic handle - no magnet/tool - from Giant Clutch = weighs nothing).

Where the EnCase and 8-Bit bury most other tools for me is the leverage to adjust (loosen/tighten) the swingers/sliders on my single speeds. It's not a regular occurrence but it just is nice to be able to do with confidence (I know most folks don't have the issue). It's also a matter of being able to go on a road trip and not pack many other tools --- assuming there are road trips in my future!