Whyte Bikes isn’t well known outside of the UK but the company has a deep history in the mountain bike world. The design team was formed in 1994 by John Whyte, an ex-Formula 1 designer with the Benetton team that helped Michael Schumacher win a World Championship or two. The company hit the big time by licensing their suspension design to Marin, winning several national titles in the process. In those days, full suspension was still so young that this was a big deal. 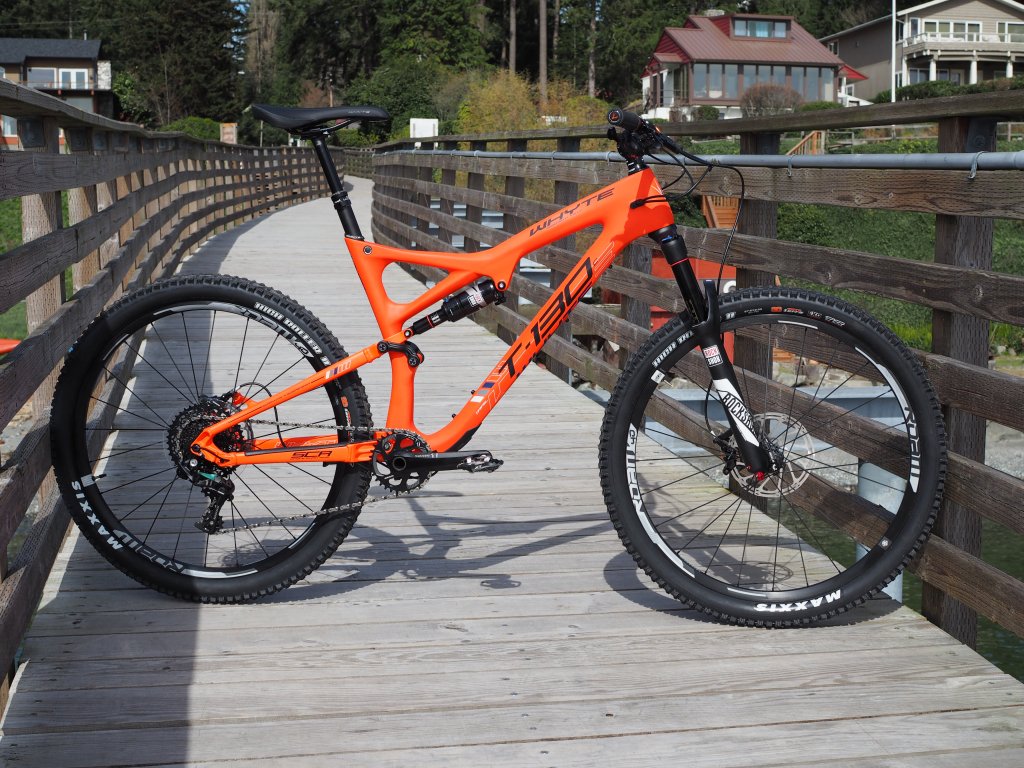 Basking in the spring sun, the Whyte T-130C cuts a dashing profile with aggressive looking angles for a 5″ travel bike.

Whyte started putting names on frames in the early 2000’s with some distinctive suspension designs, the PRST-1 being a case in point. These bikes were popular in the UK for a time. More recently the design has become more conventional and the emphasis has centered on handling. The UK press have raved over their hardtails and Steve Jones at Dirt, a tough critic to win over, seems keen on Whyte bikes. 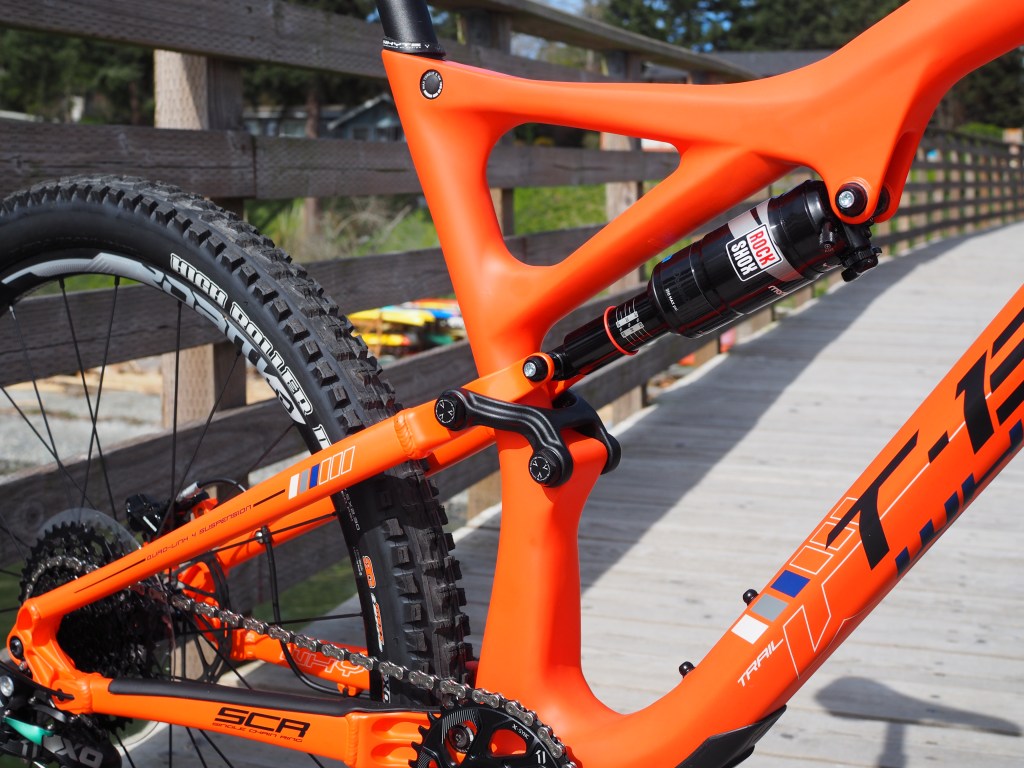 The T-130C has a horst-link style rear end with Whyte’s own special sauce added. The rear stays are aluminum and the rear derailleur cable runs internally through the chainstay. Suspension front and rear is handled by Rock Shox with the Monarch Debonair RT3 tucked up under the top tube. Whyte suggests sag from 25 to 30% so I will be playing around to find the sweet spot for my riding.

Whyte is trying to make inroads this side of the Atlantic with the range being launched here and also picking up redneck-ripper Ben Cruz to show what their bikes can do on the Enduro stage. The range of bikes covers most bases with a 160mm travel machine down to the much-praised hardtails. I opted to test the T-130C RS, their 5″ (130mm) travel carbon-framed machine.

The geometry for the Whyte T-130C RS is pretty aggressive for a 5″ travel bike. One interesting thing to note is how Whyte tweaks the seat angle for every size. The rear stays are really tucked up under the rider at 16.5″ long and on my Large frame, the top tube is a  generous 24.8″. The head tube is quite stumpy which gives options for slamming the stem if that’s your thing. I am actually running some spacers under the stem as I’m right at the top of the recommended height for the large frame at 6″2″. 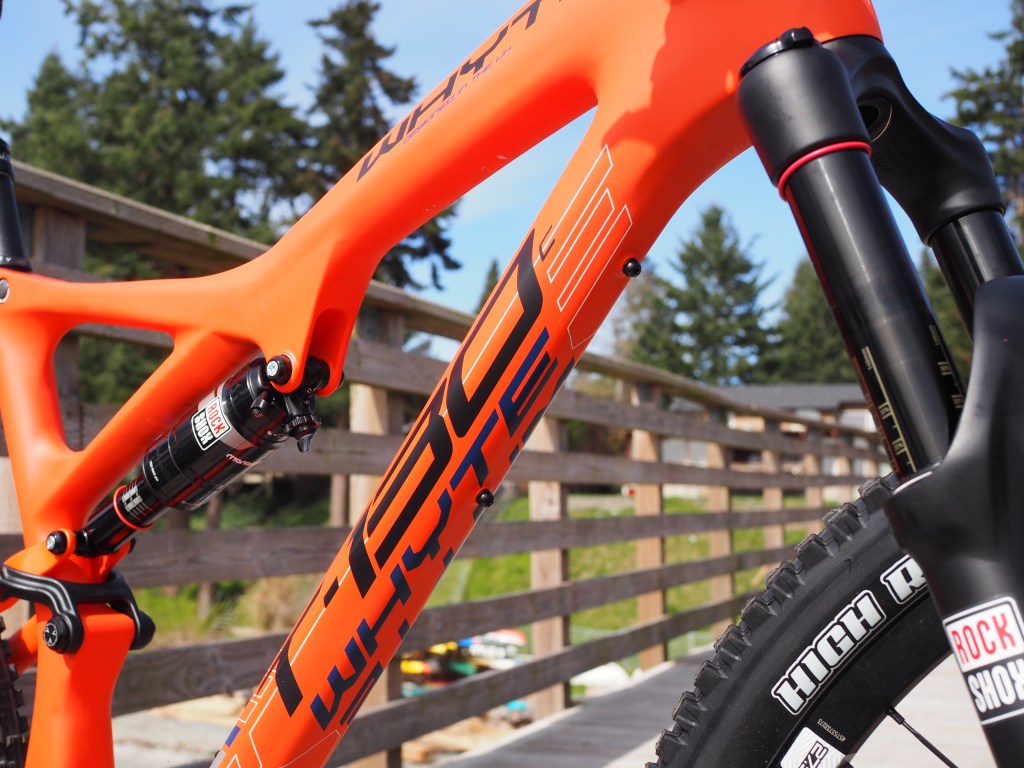 Not a common feature, but being a UK-based brand Whyte has long had bosses for a Crudcatcher on the downtube. 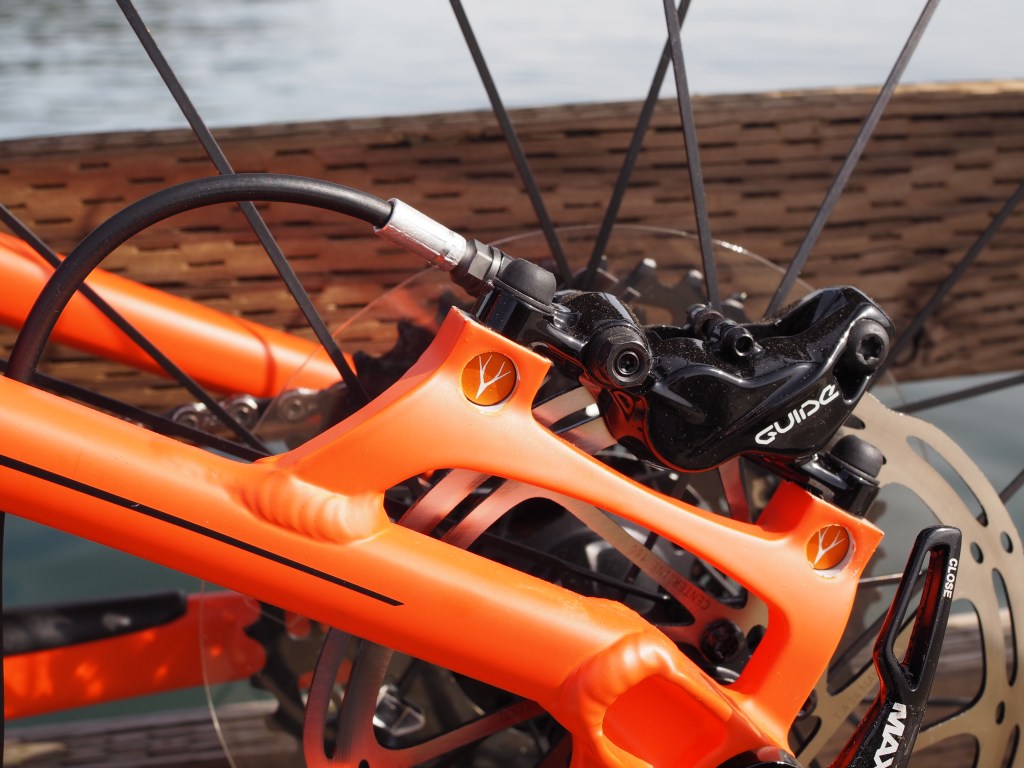 It’s all in the details… the Whyte logo shows up on the replaceable threaded inserts for the rear brake mount. The SRAM Guide RS brakes are a big step up from previous brakes from the brand and provide good consistent braking. The rear stays are boosted to the 12 x 148mm standard and seem reasonably stout to my gorilla-esque stiffness test. 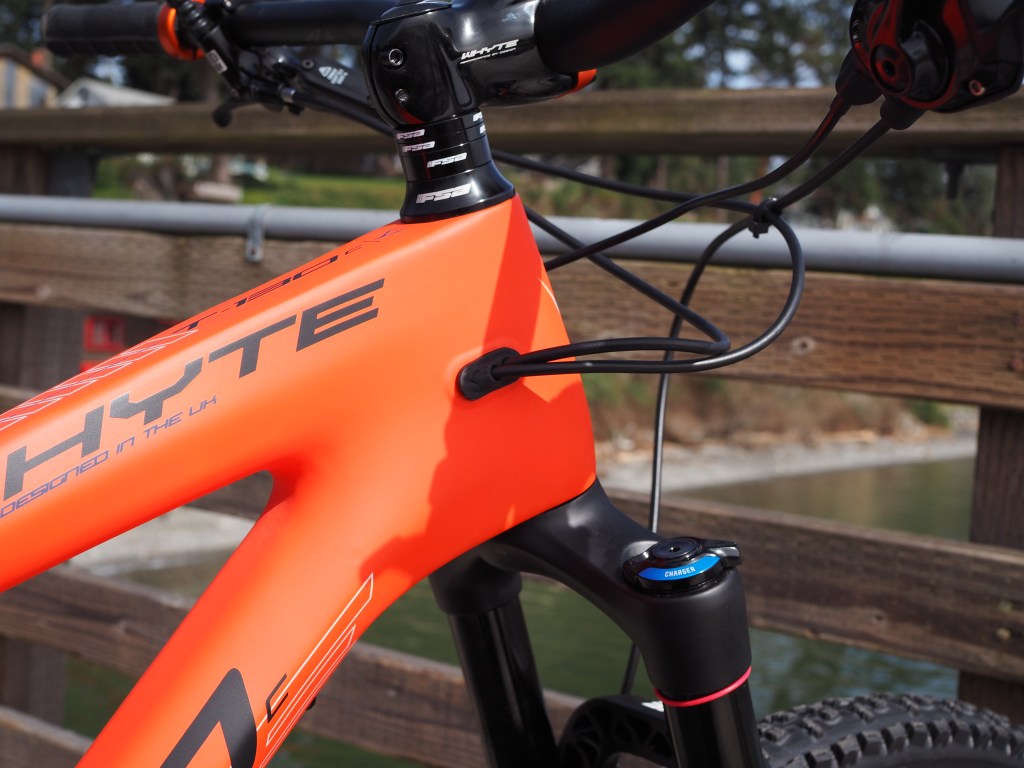 Cables that don’t run internally seem to be more of a talking point nowadays. Thankfully the Whyte internal routing seems to be devoid of the dreaded rattle and the entry ports look like they will resist letting water pour into the frame. 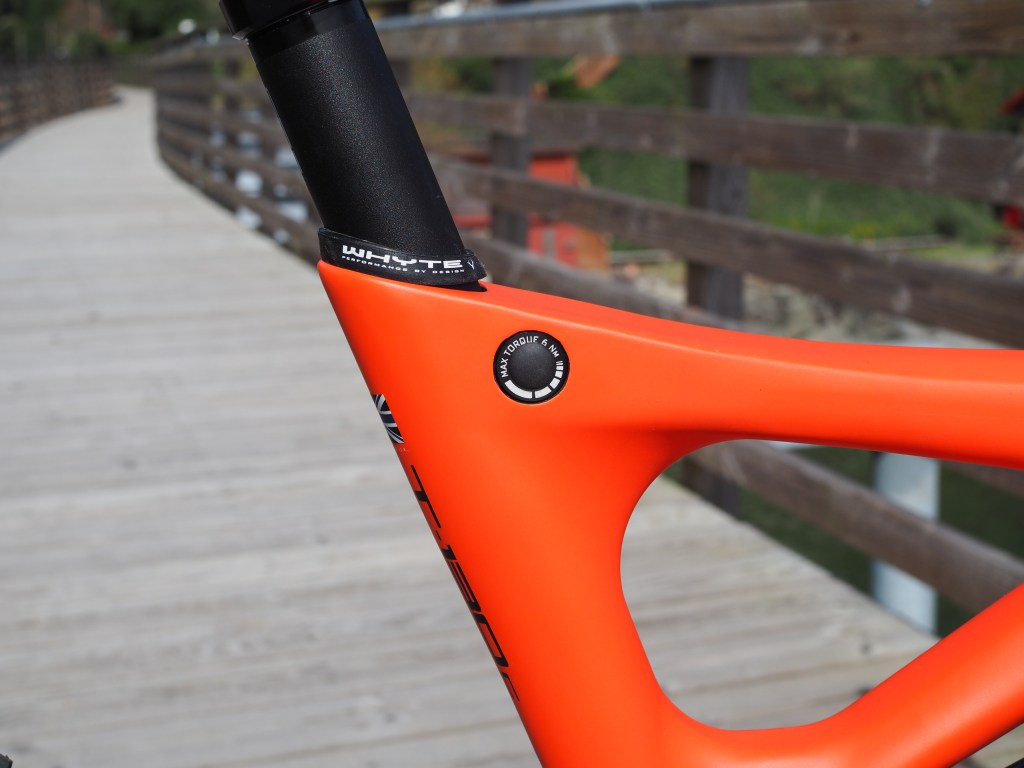 Interesting application of the seat post bolt on the T-130C frame, the internal collar and flush bolt make for a clean look. There is a rubber gasket that sits around the post to stop water running down the seat post into the frame. 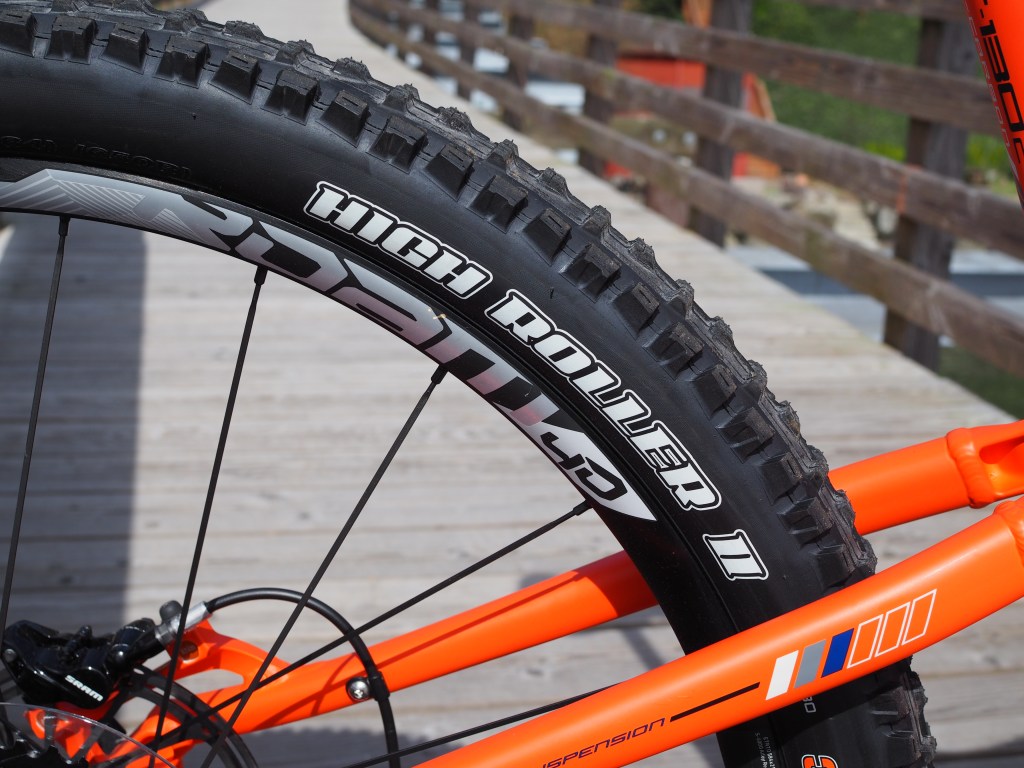 High Roller II’s are a solid tire choice for all around good times. These are not a standard fit for this bike with Ardents being the usual fare. Hopefully, Whyte will tweak the spec permanently. SRAM Roam 40 wheels are boosted front and rear and seem like a solid complement to the build so far. 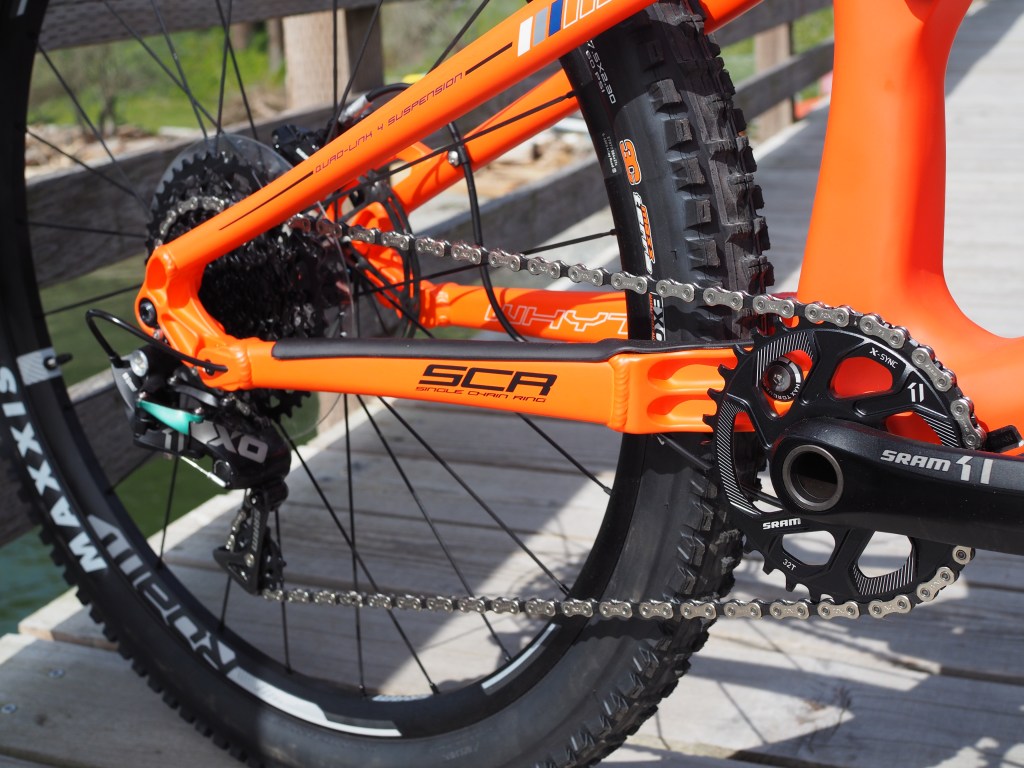 The death of the front derailleur seems more and more imminent with more frames not designed to accept one. A SRAM XO1 and X-1 mix groupset fits the bill with crisp shifting and money savings over more gucci options. 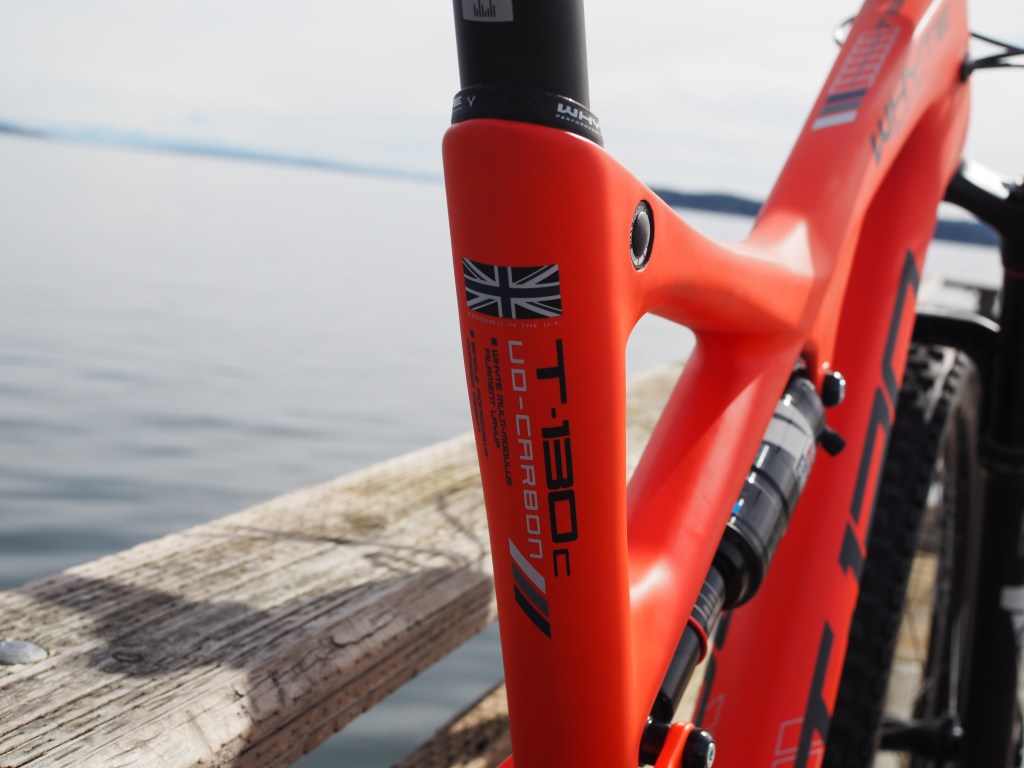 Flying the flag. Even though the Whyte is designed in the UK it has a lot of features that translate well to our particular form of riding here in the Pacific Northwest. Good mud clearance and aggressive angles should make for a capable trail machine.

The frame has some striking matte orange paint applied to it. It looks good right now but time will tell how the paint attracts mud. Overall the frame looks pretty smart and has some interesting features that make it distinct. Something that’s important for a smaller brand looking to attract riders from other more established brands. 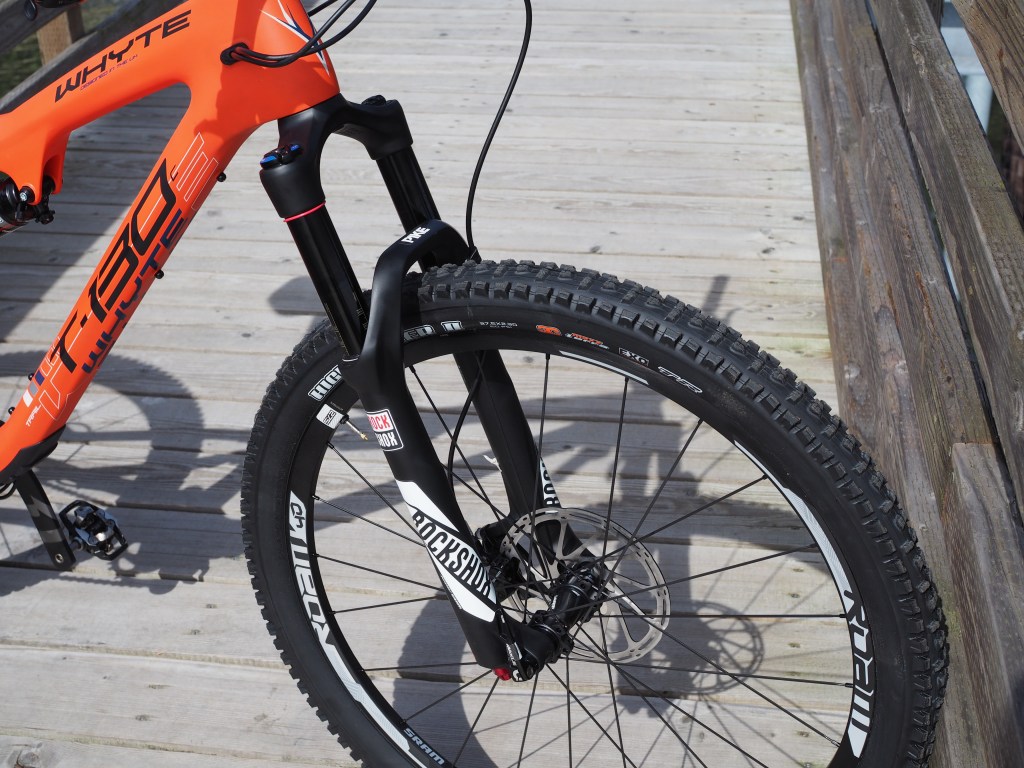 Putting a Pike on the front of any bike is a pretty safe choice. Add your preferred number of tokens and set to your normal pressure and you are pretty much guaranteed to be happy with the settings. This Pike looks significantly wider with its boost compatible dropouts to someone coming from the standard 100mm wide hub version. 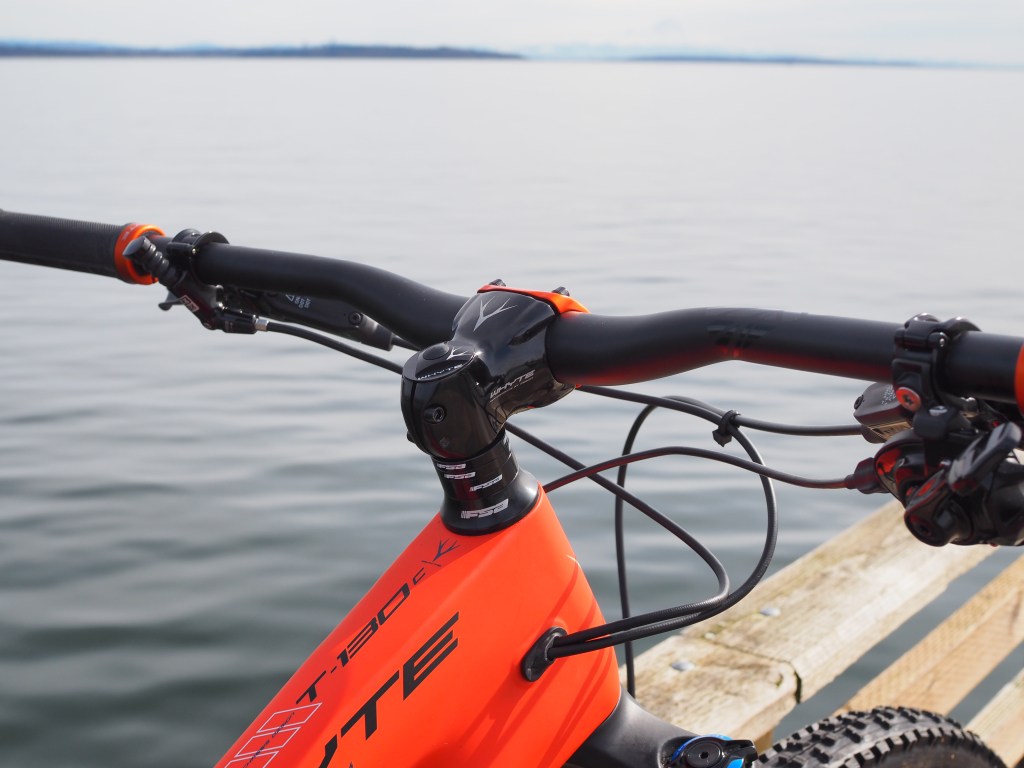 760mm bars are just wide enough for me not to switch out and matched to the long geometry the 50mm stem is on point. Both are Whyte branded items and pick up on the orange of the frame. Nice to see the Reverb Stealth post has its left hand lever mounted in the near universally favoured under bar position.

With a solid looking build and some promising numbers on the geometry chart, I’m pretty keen to get the Whyte T-130C RS out into the wild and throw it down some of my favourite runs. Even with ‘just’ 5″ of travel the numbers are shouting for shenanigans. Potentially it will also be a fun bike on mellower rides when I’m looking for those little hits and transfers that can make a tame trail fun.

Can the ex-pat cut it on the local terrain or will it have to stop for tea and biscuits to compose itself? Thoughts below.

Love the look of this bike! I'd be interested to hear what it rides like with that fork stretched to 140mm or even 150mm.

Any idea if they're going to be in any stores in the lower mainland?

I recall seeing late last year Whyte bikes were just becoming sold direct from manufacturer in the U.S. I don't expect that you will find any on shop floors in the lower mainland.

Easier requested than done, I don't have a boost fork hanging around sadly.

Of course, it's always easier to request than do!

Thats a really tiny bike - or maybe its just the pictures 🙂