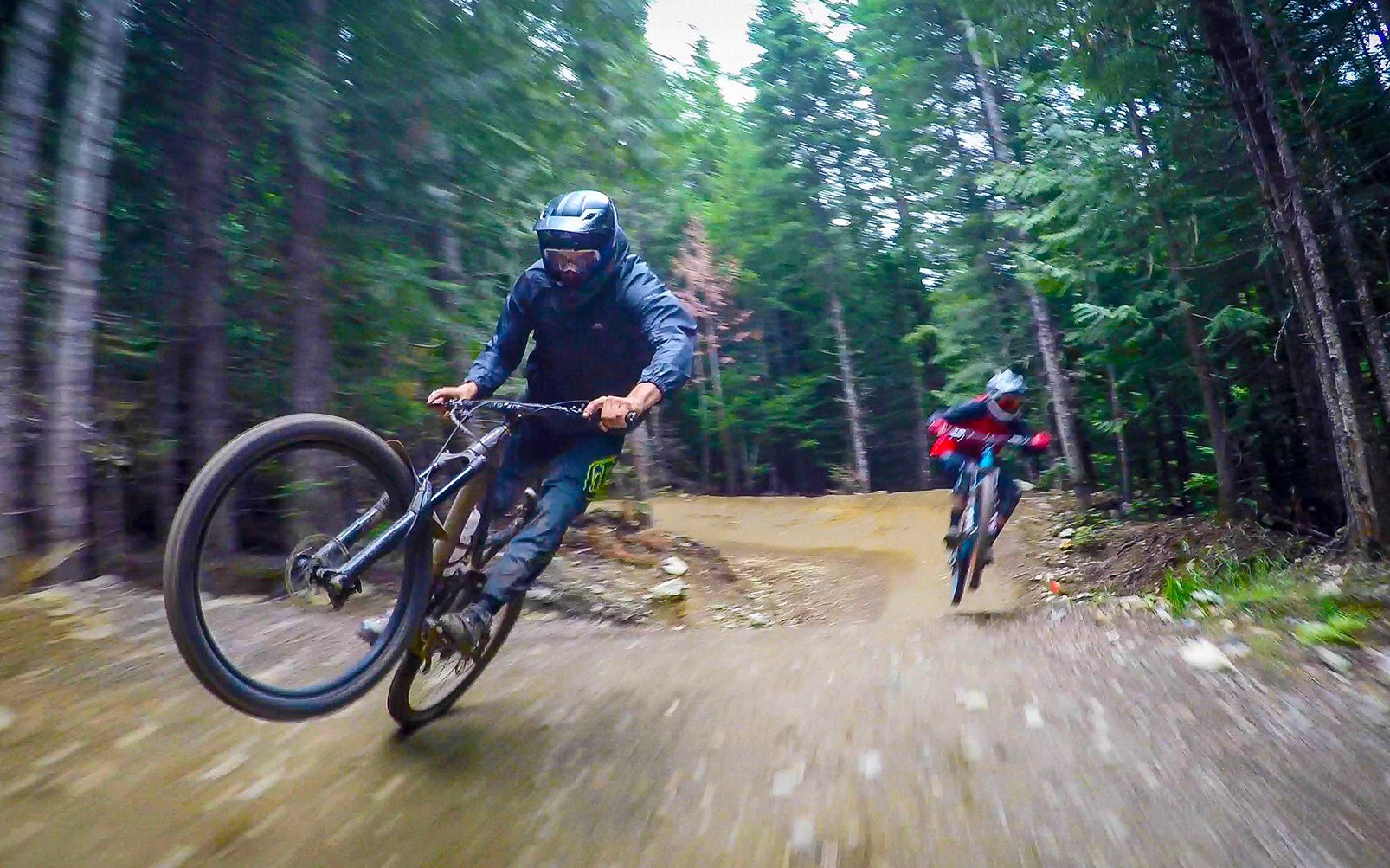 No Air For You Wagon Wheeler!

There was a time when wagon wheelers were as rare as white lycra shorts on A-Line. On the Whistler Bike Park's signature trail there was also a time when single crown forks were the province of riders who could comfortably go upside down and throw a tail whip with their eyes closed. No longer. Smaller bikes have become so much more capable in the last few years that they now make up a significant portion of lift riders on any given day, but that's not all.

There was a moment when it seemed like 29ers might go the way of Myspace but the big wheel comeback is now complete. Long travel 29ers are capable and willing to bid on any trail in the Whistler Bike Park. And soon we'll be seeing Dh bikes with full-sized hoops. Whistler is ahead of these changes and after several focus groups and two years of research (conducted by Cap College Mountain Bike Operations students and faculty) the mountain has decided it's time to act.

It turns out that the sort of work needed for maintenance changes when large wheels are factored in. Large hoops also morph the character and texture of trails to an extent that Whistler has decided it's time to enact segregation. 29ers have been banished from certain trails and the smaller wheel sizes will have A Line to themselves.

Brian Finestone, Big Boss Director of the bike park, had this to say: "Our trail crews have been noticing some differences in terms of braking bumps, cornering lines and general wear and tear. It's not that 29ers create more wear, it's just different wear and we are starting to realize that this isn't always compatible with 650b or heirloom (26") wheels."

Dirt Merchant is also on the hit list. Now that he's come out of the closet as a 29er devotee, I assumed Matt Dennison of IFHT would be upset by the loss of his favourite trail but it turns out he's over mountain bikes altogether. "Who gives a shit? I’m still waiting for those rollerblade specific trails I’ve been asking for."

This isn't the first time we've heard these opinions from knowledgeable types in the industry. Mark Fitzsimmons, race director and product manager for Fox Shox, had a slightly different take on the controversy; "When a new trail in Whistler opens, the first season it should only be legal for 29ers to ride so the braking zones can be turned into double jumps for the smaller-wheeled bikes the remainder of its life. Before this happens, the corners will need to be designed tighter than normal so when the big wheels explode them into bigger radiuses they will be perfect for the small wheeled bikes as well”

As usual, those with both feet on the pulse of the industry knew what was up. The more I heard, the more I realized that segregating wheel sizes was change that would benefit all riders.

Local opinion aligns well here in North Vancouver. James Wilson, industry veteran and owner of Obsession: Bikes, is perhaps the most outspoken of all. He had this to say; "29er riders need to be on their own trails. The deep grooves that those pie cutters dig and the blown out corners are bad news. In fact, I heard that they ( the 29er riders) are creating their own trail association on the Shore called the BWMBA - The Big Wheel Mountain Bike Association."

Don't despair, however, if you are a card carrying member of the Wagon Wheel Cartel (WWC) or the BWMBA, Whistler hasn't forsaken you. After analyzing the data and consulting riders of every wheel size (aside from Plus and fat bike riders who still linger in the abyss between legitimacy and obsolescence) the brains behind the phenomenal success of the WBP have decided to create a line from the peak to valley that is exclusively for those with elephantine wheels beneath them.

Beginning at Whistler Peak, the new trail will be radiused and sculpted with wagon wheelers in mind. No lip will be too steep and no corner too sharp. If you go in too hot and miss a corner, trees and rocks will be padded for your safety. The line, provisionally named The Niner Liner, will be controlled by a wheel size checker like those used for rides at Disneyland. If your wheels are too small the gates won't open. It's possible that once doubles form and corners are appropriately blown out the line will be rechristened and opened for smaller wheels.

While these aspects of the policy have been solidified, Whistler has yet to make a firm decision on 27 Plus, fat bike and 29 Plus wheels. Rob McSkimming, the voice of experience and wisdom for the WBP, invoked the cultural heritage of smaller wheels in his preliminary analysis of the situation. "The trails in the Bike Park were all pioneered by riders on 26" wheels. There is history and tradition to back me up. If you look at 27 and 29ers you can see them as a logical outgrowth,  but Plus and Fat tires are something else entirely and we'll have to look closely at how they mesh with established wheel sizes. Hopefully they will fit in, but if not we'll act responsibly to restrict their access. How else can we make the WBP great again?"

Expect to see these changes on opening day, currently scheduled for May 19th.

Truth is the snow depth at mid station is 12 metres (measured diagonally like a Maxxis tire) and the park will only be open for fat bikes this season.

Thanks Cam for coining the new term Heirloom bikes which will now be used to refer to any 26er with a 142 or 135 hub size. Personally I still enjoy my Heirloom Slayer.  😂😂😂

The lovely Heirloom SX Trail is my new go to bike 👍

while we're at it, let's ban the use of goggles with open face helmets.

and your fanny pack

Endur-Bro was playing along. That's what the sharp folks do on April Fools'!

Finally! Someone gets me.