The rise and fall of the fork brands is almost worthy of a soap opera. For many years the Fox range were the top of the list for many riders. Then something happened in 2012. Fox introduced their new CTD dampers and almost immediately the love affair with Fox was gone.

I ended up with a 2013 Fox 34 CTD on my Santa Cruz Tallboy LTC. I rode it as stock for a year, unhappy with its performance, but making do. The issue with the 2013 edition of the CTD damper in the 34 was that the compression damping was too light, making the Descend mode completely useless. In use it made the fork dive hard into its travel, particularly on steep sections of trail when on the brakes. I worked around it by running the fork in Trail mode and running a higher pressure but that robbed me of suppleness. 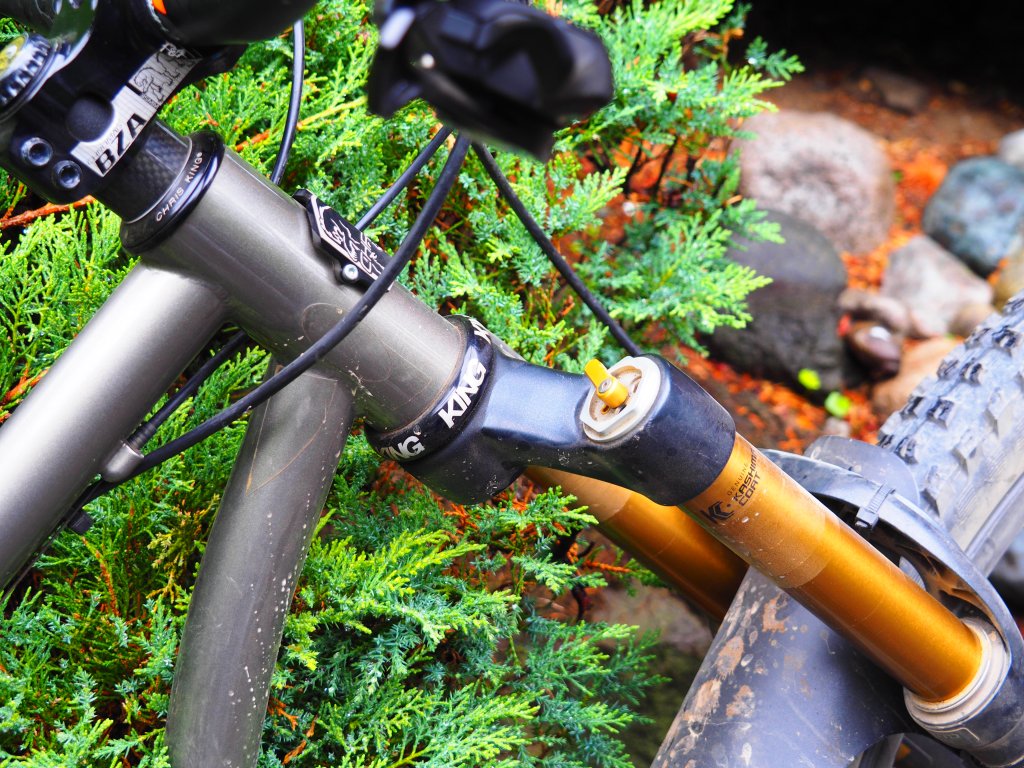 That isn’t your normal 2013 Fox 34. There is something different about that damper.

In early 2014 I upgraded the damper to the newer CTD that Fox offered to answer the criticism. To some extent it worked, but by that point I’d ridden a Rock Shox Pike and so my eyes had been opened to a well damped fork. The 34 got relegated to my hardtail (as that bike is all about punishment) and a Pike found its way onto my Tallboy.

Roll forward to the start of this year and Steve at Vorsrpung and I started exchanging emails about his replacement damper for CTD forks, blessed with another 3-letter acronym; the TLA Compression System. TLA stands for Twin Low-Speed Adjust, which is a two position mode switch. Those modes flick between a soft and a firm mode and those modes are custom tuned to your preferences. We did a preview of the damper system back in May last year and for all the geeky details you can go back to that article. 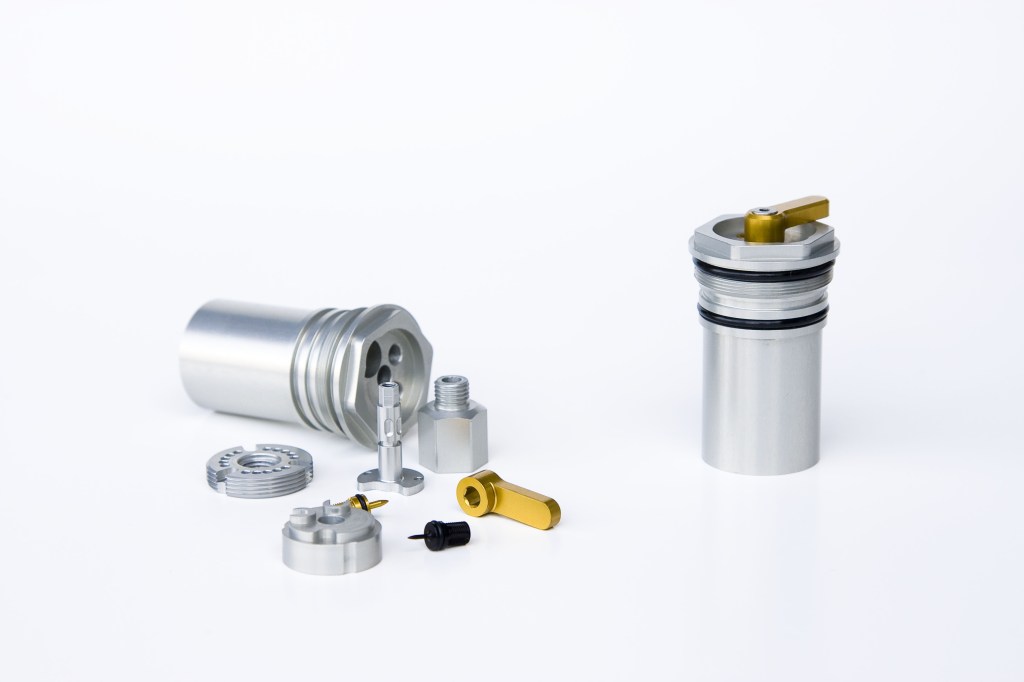 Looks pretty simple right? These are the guts of what goes into the Vorsprung TLA damper.

My finger had been very close to pulling the trigger on a new fork for my hardtail, looking for that Pike-like performance, but the opportunity to take my 34 and upgrade it felt like a better solution.

1. How much do you weigh?
2. How would you rate the aggression of your riding, on a scale of 1-10, with 1 being a beginner, 5 being the average rider, and 10 being a world cup level racer?
3. How steep is the terrain you typically ride on a scale of 1-10, with 1 being gentle rolling terrain and 10 being the steepest stuff in Whistler or on the North Shore?

My answers were 185lbs, 7.5 and 8 respectively. I don’t shy away from any lines on my hardtail and it gets ridden hard. I didn’t want to be left wanting in the fork any more. Steve took that information and went away to set up my custom damper. After a service and the damper swap my upgraded 34 was ready to ride. 6 months on and I’m no longer lusting over a new fork. 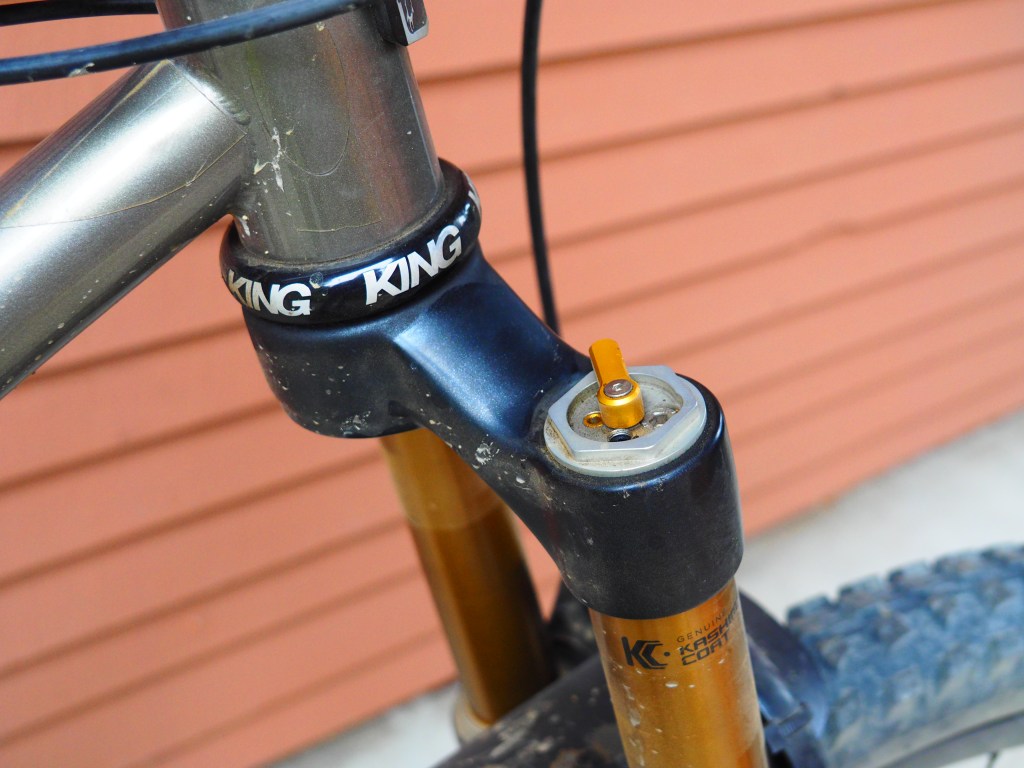 The lever has two positions and in this picture is in the full open position. Flick the lever to the right and you are in the firmer of the two modes.

Everything I’d been told about the TLA damper suggested I should be able to drop the pressure in my fork, so I started by dropping 5 psi. I ended dropping a little more (I’d estimate 7 to 8psi, but the accuracy of my shock pump isn’t to be trusted). The result is suppleness right at the start of stroke, allowing the front tire to track the terrain more closely. This translates into more grip at the front of the bike, which on a hardtail is a very good thing. You are battling the rear end of the bike so much that you need all the help that you can get. 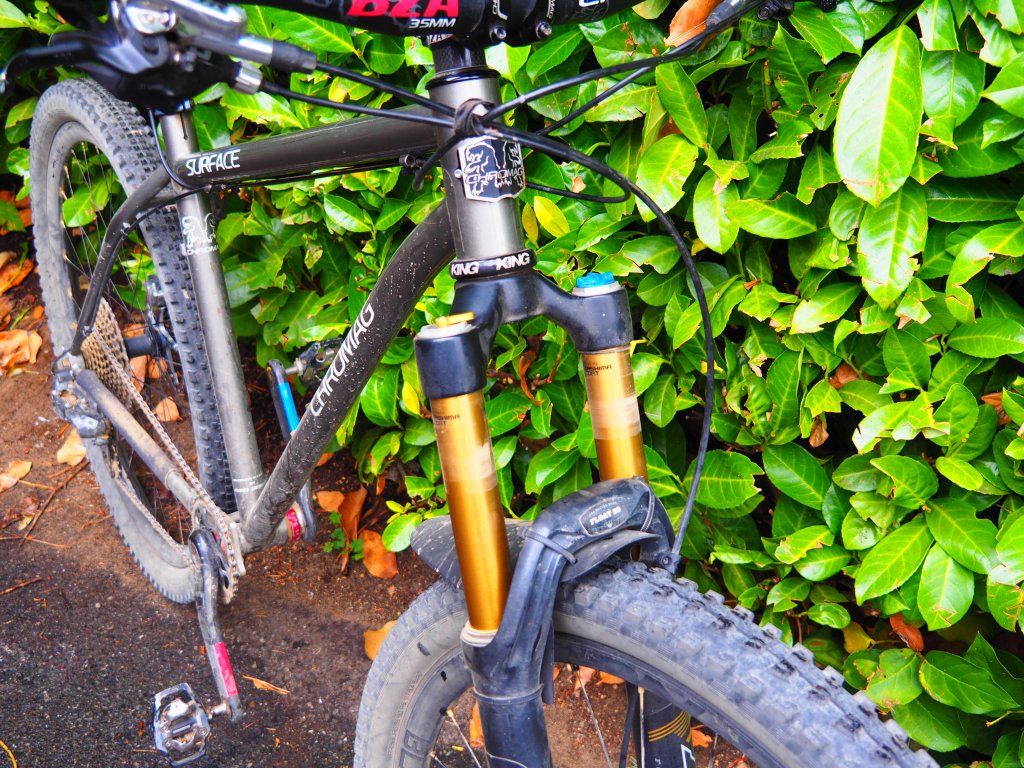 The front end of a hardtail is a good place to put a fork through it’s paces. You tend to ride the fork harder and rely on good damping to keep you out of the bushes.

Thankfully the TLA damper has that balance of suppleness at the start of the stroke and the support from the mid-stroke to end of stroke that allows you to pitch the bike into steep sections of trail without blowing through the travel. The front end of the bike rides higher in the travel even when your weight is pitched forward, avoiding that diving sensation that can leave your heart racing on technical sections. Without having rear suspension to compress and balance the fork compressing, the head angle on a hardtail just gets steeper and steeper.

I typically leave the fork in the softer of my two settings, only flicking the lever to the firmer on smoother pump style trails. The TLA damper allows me to ride the fork much more aggressively and avoid the fizzing in my palms at the end of a long rough descent. Having a Pike on my other bike, and having enjoyed the latest Fox 36 RC2, the Vorsprung TLA offers a level of performance that is on par if not better. 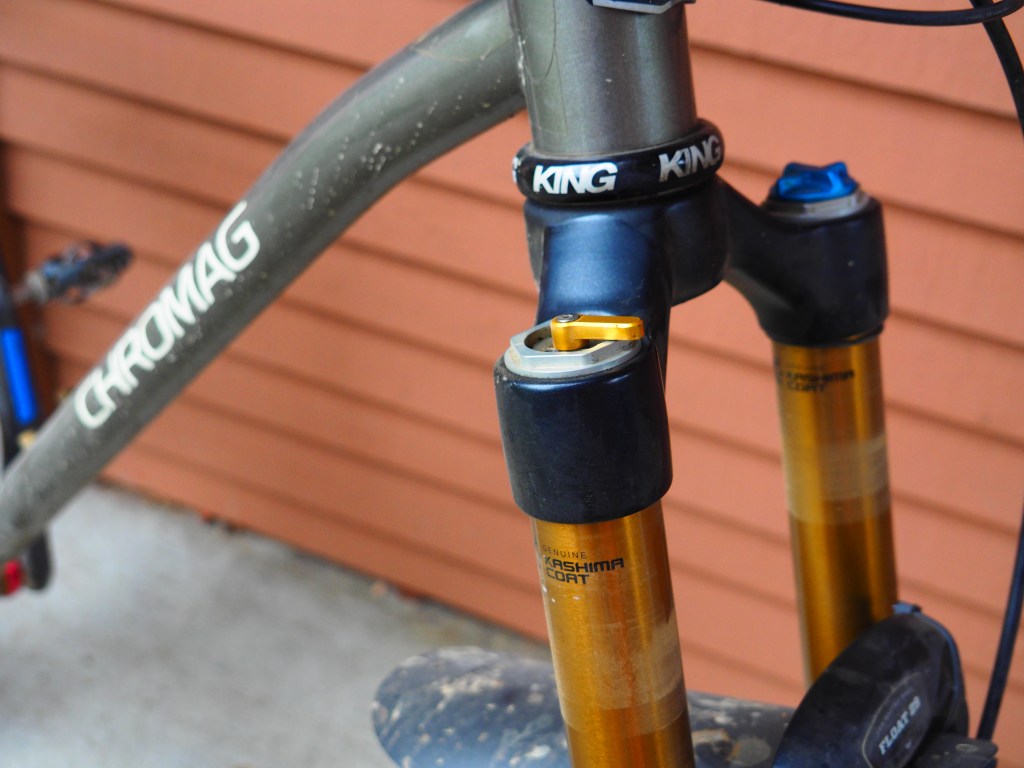 The Vorsprung TLA damper has stopped me from scheming a way to get a new fork on this bike. The fork now has that mid-stroke support to happily pump the bike through rough terrain without giving up on small bump sensitivity.

Is it worth the $330 for the upgrade? If you are stuck with a ’13 or ’14 model year Fox 34 CTD absolutely. The Fox 34 isn’t a bad chassis for an aggressive trail bike and, given the way that we like to ride those bikes in the Pacific Northwest, that fork with a more aggressively tuned damper is a must. That $330 doesn’t just get you a new damper but also a full fork rebuild including new lower friction seals. Compared to buying a new fork it’s very good value.

For more info check out Vorsprung on the web.

Could a custom damper stop your new fork lusting?

The other things that you can do if you have the Fit damper, is have a damper upgrade kit installed. Fox has one available, but it needs to be installed by a Fox service provider as the tools needed to disassemble the compression assembly are quite specific to the damper it's self. Running a high quality 10wt oil helps. Fox's 10wt is really only about 7.5wt and foams/aerates terribly compared to some others. You can also add a spacer or about 10ml's of suspension fluid to the air camper. This will change the ramp up at the end of the stroke and provide more bottom out control.

I'm going to go this route soon. Since I'm a lighter rider I can usually get away with lower pressure. I think that if I just get the low friction seals, and add some oil volume, it will probably be more than adequate. That said, I can understand how some people would require the upgrade. At 165 lbs rider weight, I can just barely find the fine line between small-bump compliance vs. too much dive, on the stock '14 FIT.

There is a new seal out now. All 2016 model forks have it and should be available from your LBS. It does require a seal driver to put it in though. It fits tight in the lowers. Make sure you lube inside the seal where it runs on the stanchion. Fox say not to, but that's bollocks. They feel very sticky if run dry. Run at least 50mls splash fluid in each leg and as you are going into winter, don't use the new Fox Gold lube. It doesn't like the cold. Try Motorex Supergliss 100k bush lube. Very slippery!

Thanks for the info Doug. So these are the stock Fox seals for 2016 that you speak of? Do you have any opinions on either the SKF low friction seals (from Vorsprung, or available on Ebay) or the Racing Bros seals from Vorsprung? I was originally going to go the SKF route. Thanks again.

Hi Mammal, sorry it's taken an age to come back to you. The SKF seals are good as the Fox and easier to put in. Don't bother with the Racing Bros. They have very low lip tension, which means they slide nice but won't hold oil in the lowers unless you run very low amounts of oil. They recommend a max of 15mls, which is not enough for a Fox fork. If your fork is a new 34 or 36, only run 30mls splash in the air side because of the reduced lower leg volume of the new negative air camber. Still run 50mls in the damper side though. Cheers, Doug

One additional question Doug. I'm finding it next to impossible to locate Supergliss bushing lube in Canada, would you consider Fox gold lube as a next best option, or is there something more readily available that you could suggest. Thanks!

Any chance of a package deal for TLA+Corset upgrade? That would pretty much fix my whole bike.

Does this upgrade replace most of the circuitry in the stock damper, like the shim stacks and other parts? Or is it a single valve upgrade?

It replaces the entire compression assembly, yes - this means you have a new compression shim stack that we valve for your specific requirements, new HS and LS compression pistons, new topcap, new adjusters, as well as a full service with seals.
- Steve @ Vorsprung

Dumb question: Looks like Jon is running a fixed-travel 34. Any reason a TALAS air spring will be incompatible with your damper in the right leg?

Mind the fact this wonderful mod by Steve only works on the top-end 34s sporting the FIT damper. We the ones with the stock CTD semi-open-bath (????) damper are stuck with a cartridge even Suntour outperforms. I can't believe how much Fox charges for this fork and how poor it performs.

You wanted a cheap sticker price. Well, this is what you bought; an OEM level product with a shit damper. Upgrade the damper, stop complaining.

I didn't "want a cheaper sticker price". I got the fork with the bike. Fox announced the CTD damper with bells and whistles, and as Jon's article points, it was a deception. Upgrading the cart and then going for Vorsprung's mod would be too much for me.

We did develop an upgrade kit for the Evolution series damper as well, but by the time we'd sorted everything we felt needed attention (compression damping, air/oil separation, volume compensation, shimmed rebound piston, proper sealing) we had replaced almost everything in the whole cartridge - it wasn't financially worth doing unfortunately, as it would have ended up being a $400+ upgrade.
-Steve @ Vorsprung

Yeah, I recall reading about it, and how "improving" it meant pretty much "replacing the whole damn thing". Thanks for the reply though! Keep up the great work you guys are doing!