With the snow slowly melting from the European high alpine, Team Vertriders are back with their first film of the 2013 season. This time, the Dolomites. Great shots with the drone and some really cool looking trails.

We were exploring this mountain in the Dolomites. The trail on the backside looked promising on the map… Hiking our bikes up the steep front, we entered this canyon and all of a sudden the surrounding morphology changed from forest and grey rock formations to reddish sand stone. The mountain laid open its inner core.

The trail was steep, exposed and carved into gnarly terrain. At places, it was eroded and wooden planks had been used as reinforcement. It was clear, this was a project. The backside trail turned out to be pretty unspectacular. The following season we returned, along with our camera guy and a drone for the aerial perspective. 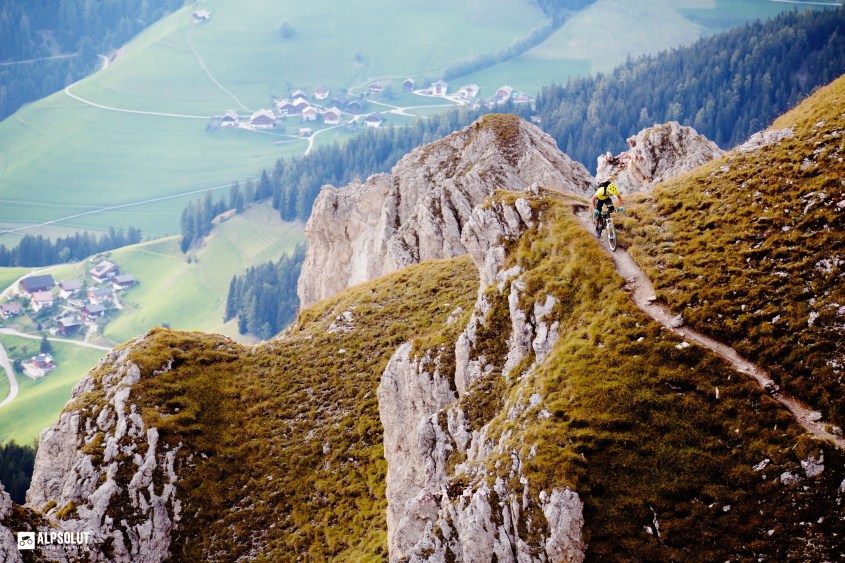 In the high alpine with Vertriders.

I had been visualizing the canyon line for quite a while in my mind, I knew it should be possible, if you really wanted it. From the summit, we gently rolled away along a grassy ridge, zigzagging down towards the edge of the canyon. The action was about to begin.

The other guys found an alternative line, the remaining part of the old trail, which had been eroded pretty badly and had been abandoned. It meant dropping in into steep scree, rugged terrain, littered with weathered rocks. While they dropped in readily, I tried to find the line into the new trail. It was a sniper line down a section of steep rocky steps requiring some good dose of braking, speed was no option for escape. 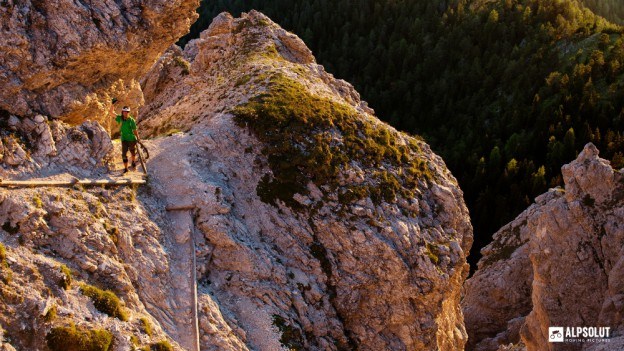 Lining up the canyon.

The run-in was an exposed wooden ladder and the adrenaline from the first attempt made me take an early turn-off down a sketchy chute, a short cut which carried me much too fast towards a huge rock down the bottom of the canyon. A close call for self destruction. The next time I stuck to the more sophisticated original sniper line.

But I did not really see through to the other side, no light at the end of the tunnel, my mental vision blurred. You know, you can always come back for another try, but it wouldn’t have been until the next season, waiting all winter for the snow to clear again. And with all the camera gear set up the drone hovering above, the stage was pretty much set. You don’t quite wanna forget your text just then. 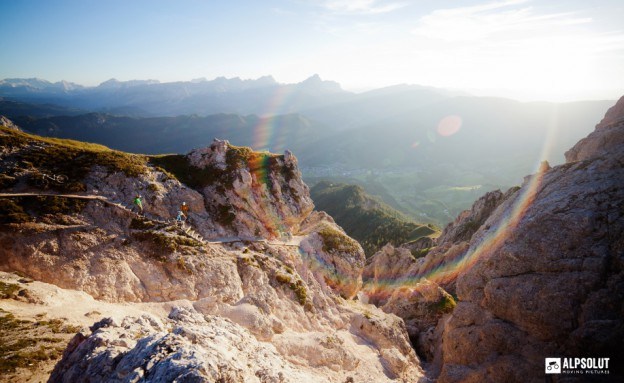 Late day light in the Dolomites.

So I tried my best to focus, the fog cleared for a moment, I could see through and I knew it would close again soon. Hectically, I shouted to the film guys, I’ll do it! The sun was low, so were the batteries, it was virtually one try and I slipped through. Aiming, snipering and hitting the line, getting stoked for sure.

When the door opens and you walk out onto the line into the light, leaving you in a bubble for that moment… surely the best feeling!

Bike mountaineering is surely different than the usual trail experience, but it makes for great stories…

These guys would love riding in Pemberton.

Wade and I took Harald Philipp up Cypress when he was here for the VIMFF. He rode Wild Cherry on Wade's Altitude and was absolutely loving it. The skills needed for old school Shore tech are definitely along the same lines as some of the bike mountaineering descents in the Alps/Dolomites.