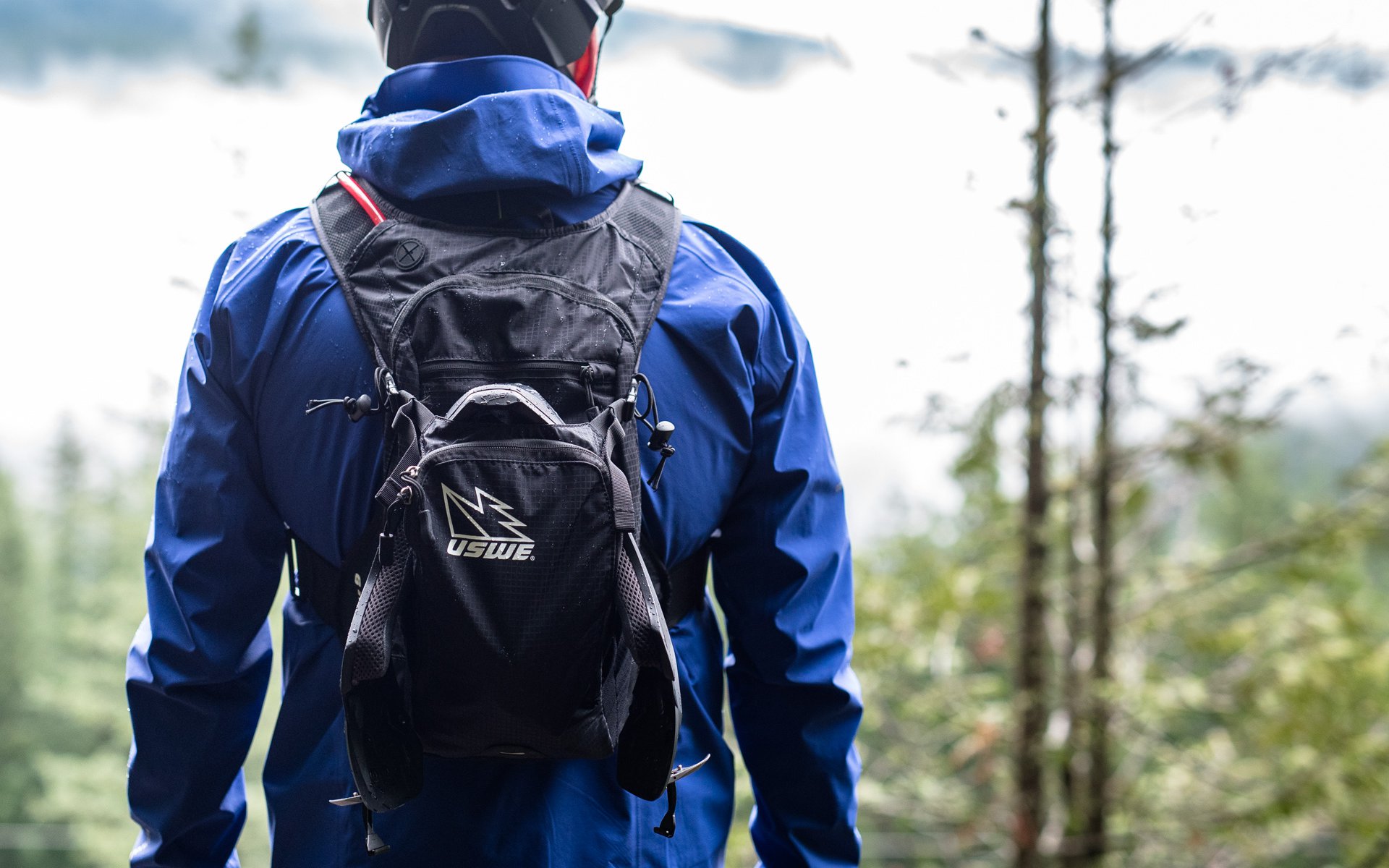 "But there's no waist belt?"

Argh. Open a beer. Let's talk about USWE [you-swee] packs for a moment. Imagine you're being hugged from behind by a Koala. The Koala is Swedish so he says something like "dunder succé" instead of "crikey" but otherwise it's the same animal. It has a firm grip on your shoulders and its legs articulate around your chest.

No matter what you try to shake the cuddly little beastie it stays put effortlessly. It's not as hot as the sack of crap you're used to carrying around and no matter how squirrely things get on the bike it's cool, calm, and composed. 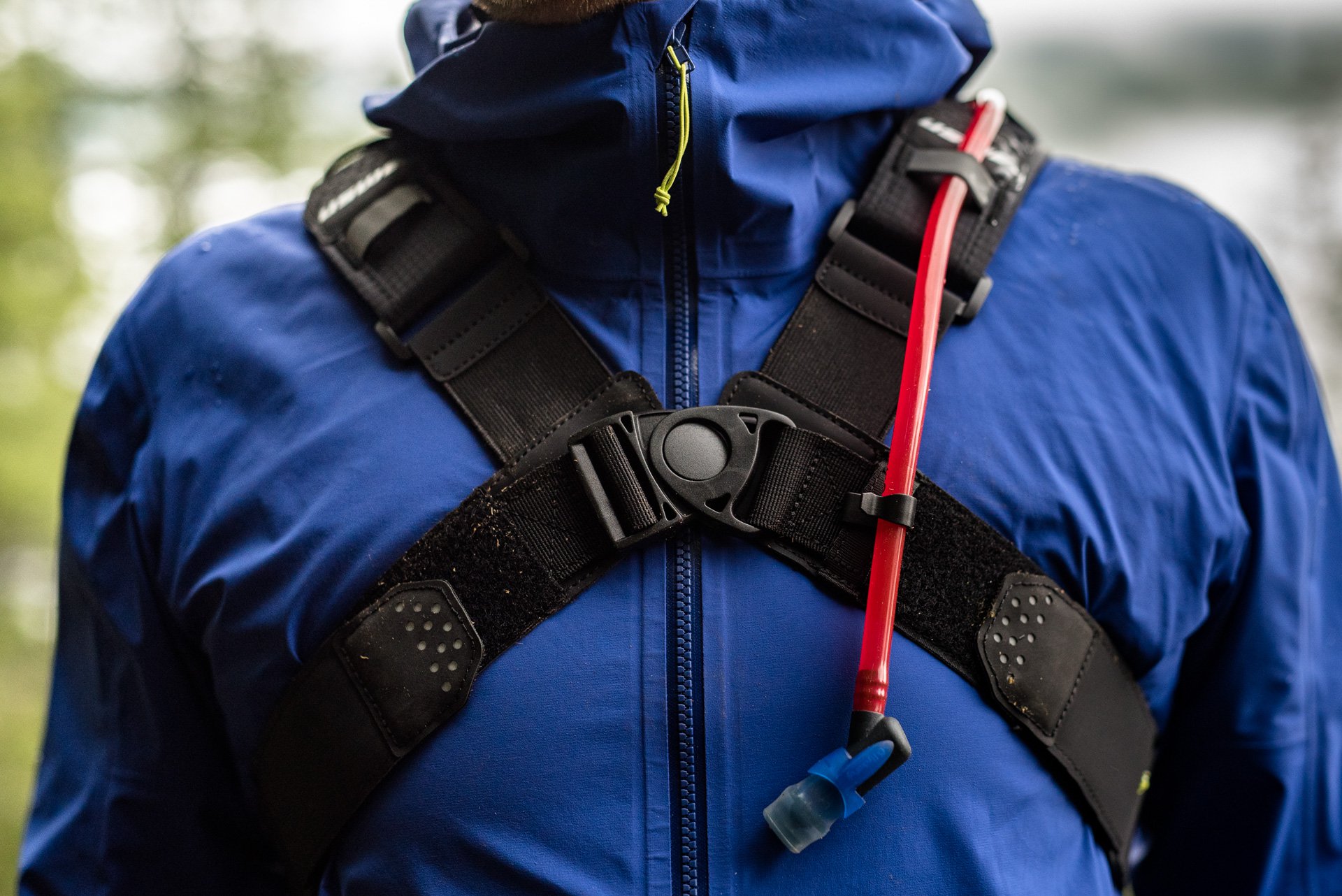 The extensively adjustable top and bottom straps meet at a single clasp in the middle.

I'm usually highly suspicious of unique products, especially ones invented by folks that openly admit to having "absolutely zero experience in designing" whatever it is they're selling.

But, in the case of USWE, the pack came with high praises from the folks at NRG Enterprises in Nelson. They bikepack in the Selkirk mountains on single speeds and enter 50km triple crown rides with 2,600m of climbing on Fat Bikes and DH rigs and in my years selling bikes they've never steered me wrong so I rode on with an open mind. 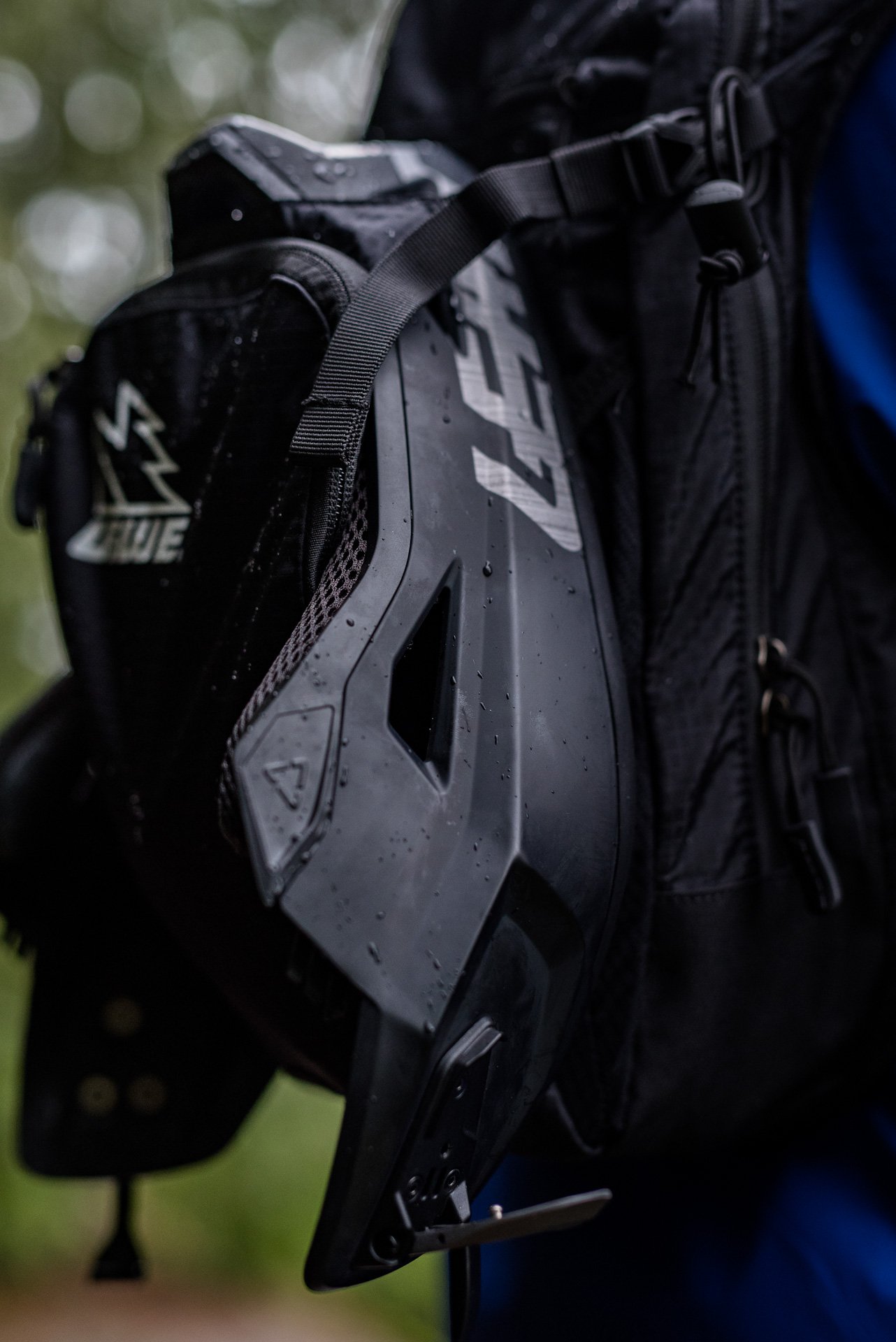 The open external pouch is perfect for holding a rain shell, a baked potato and the chin bar from my Leatt DBX. 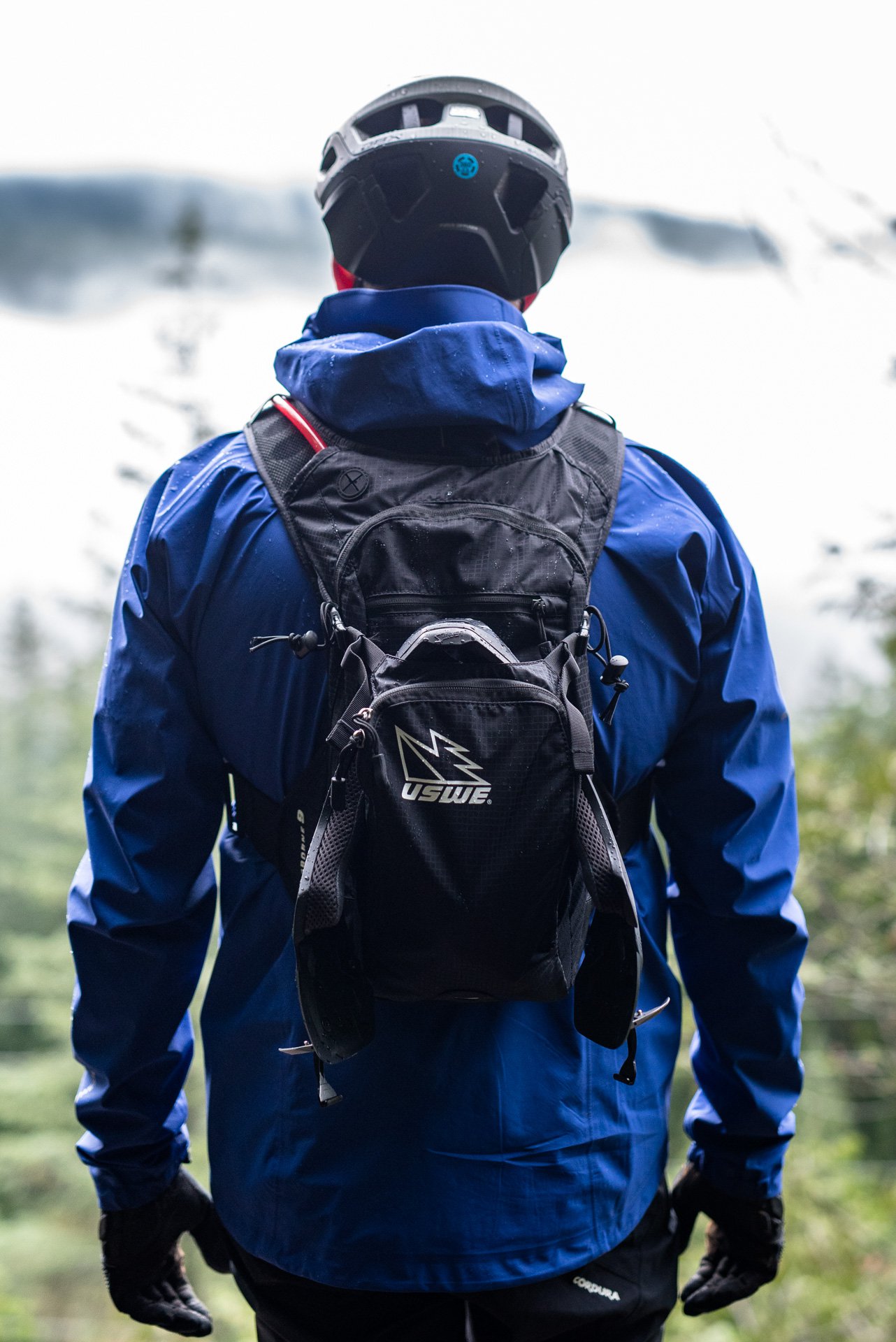 I keep my tool roll in the main pocket with the bladder. My phone, in a waterproof case, is easily accessible in the outer pocket. 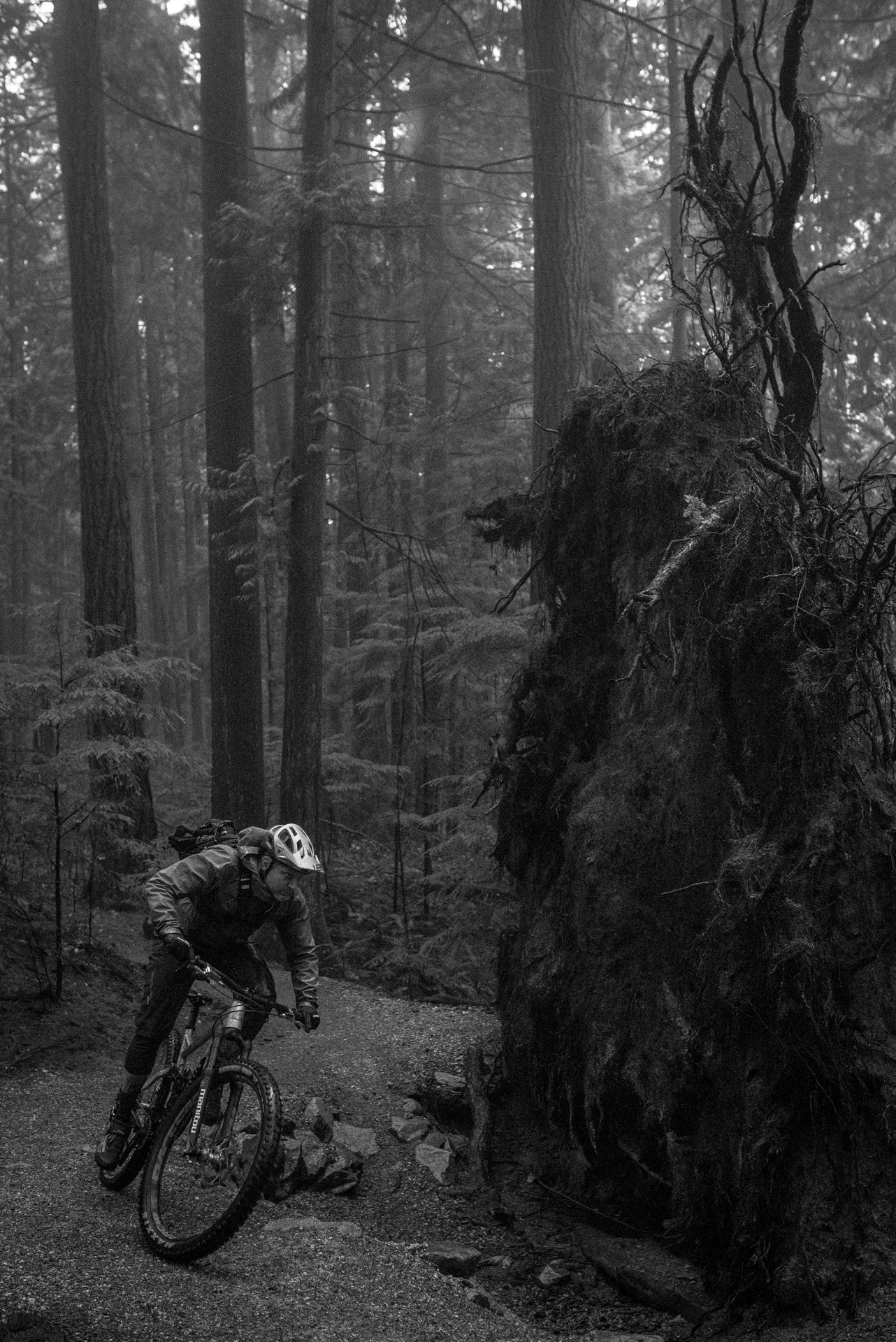 I wish USWE made a waterproof version of the Airborne 9. It would be my go-to pack year round for non-camera rides.

For my first ride, I chucked in all the gear I normally carry, hopped on my single speed and went out for a few hours of Shore-XC riding.

The USWE is the most adjustable pack I've used with independent adjustments above my shoulders and under my armpits. The top straps are rigid like a regular pack while the bottom straps are stretchy to accommodate movement. It's often the case that products with more adjustment take longer to dial in but it took all of five minutes to get this pack to the settings I've been using since. 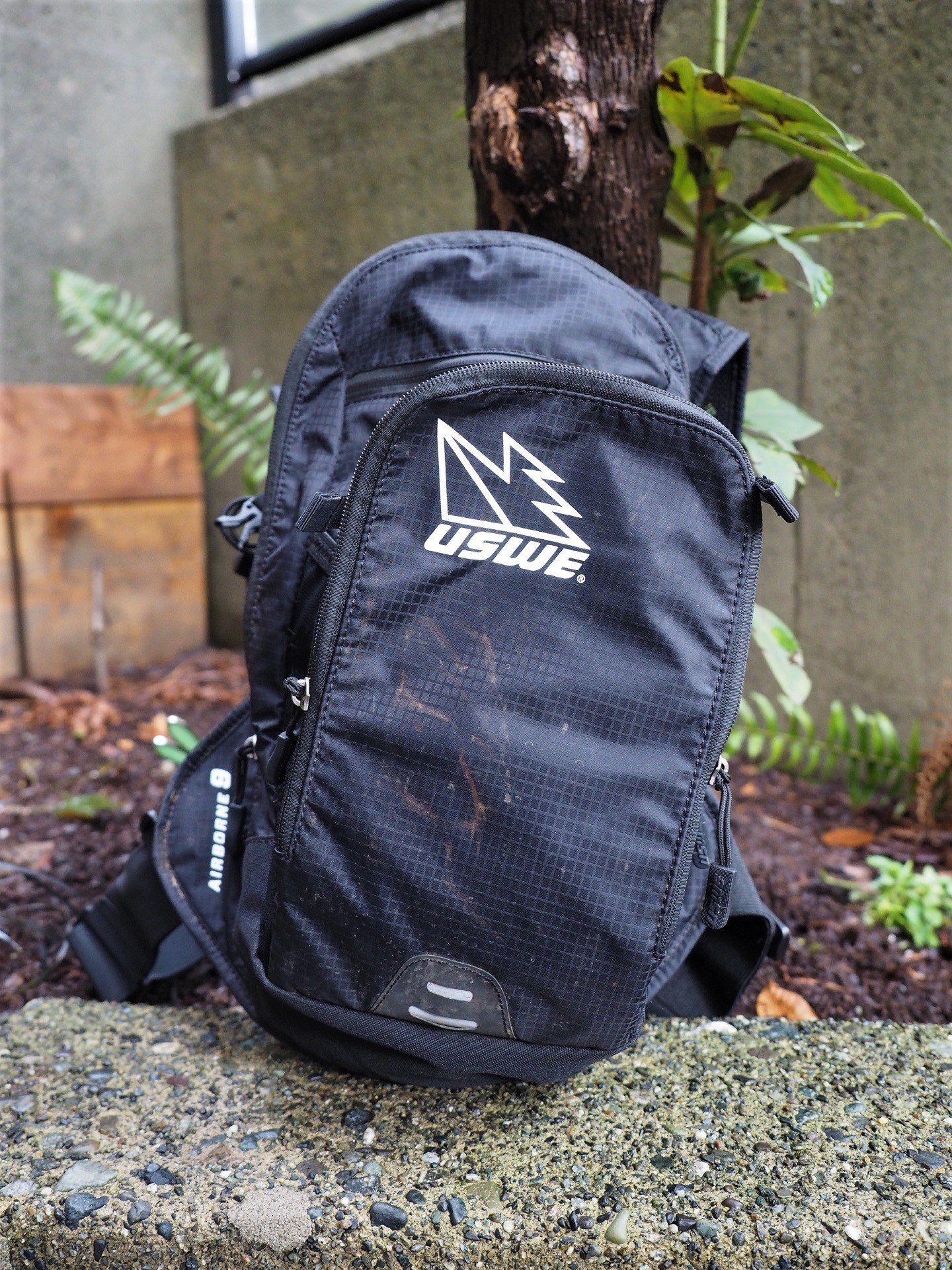 The Airborne 9 has nine liters of capacity including space for the 3L bladder. It weighs just north of 600 grams without the bladder. Photo: Andrew Major 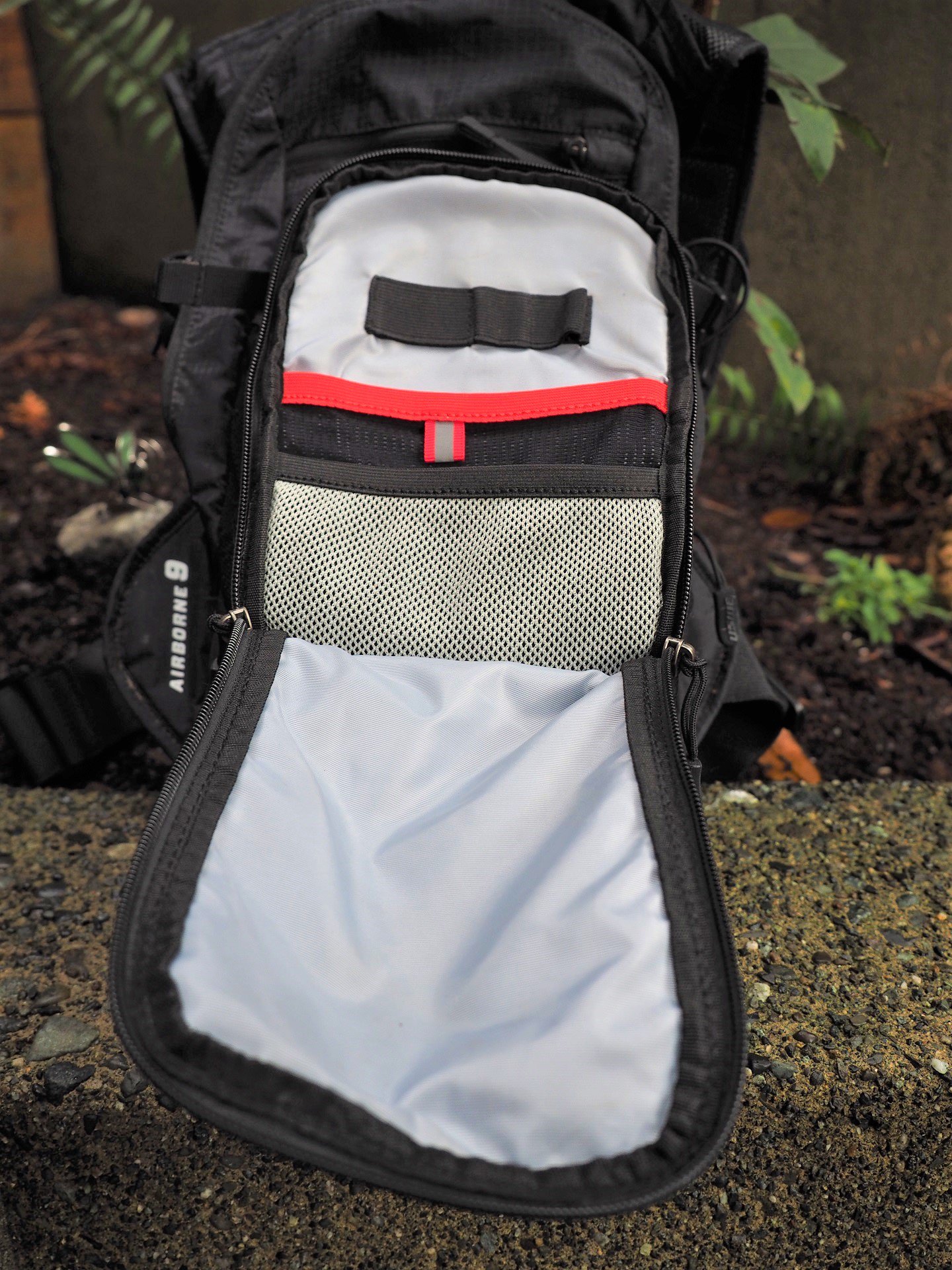 There are a surprising amount of storage details in the Airborne 9. The secondary pocket is practically book-bag-esque. 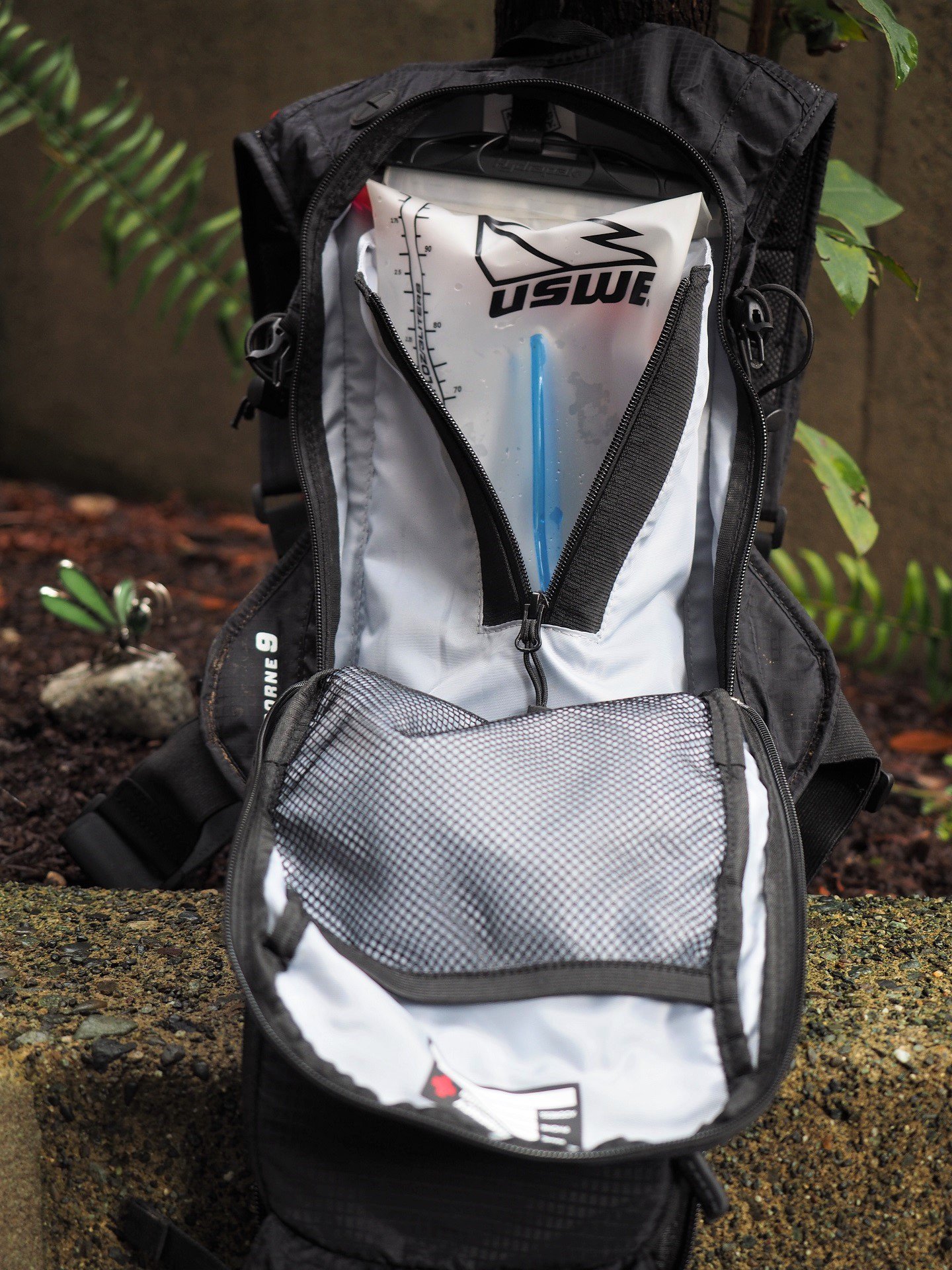 The 3L HydraPak reservoir zips into its home in the main pocket. It's easy to fill and clean, and the locking bite valve works great.

Love riding without a pack? That's great - it doesn't work for me and my stuff. Some of the hip packs out there are getting comically large but even so, I want water, tools, an extra layer, etc. Oh, and I'm going to ride a bike where I'm standing on the pedals for 95% of my ride so it has to stay put while descending and be comfortable for that frothing at the mouth cranking on the handlebar 1FG riding I like.

USWE delivers. The patented No Dancing Monkey chassis absolutely keeps my load in place in any conditions. The weight sits a bit high compared to lumbar style packs I've worn so anytime I'm doing up the zippers and my Airborne 9 feels stuffed I know I need to reconsider what I'm carrying - or switch to my larger ACRE Hauser. 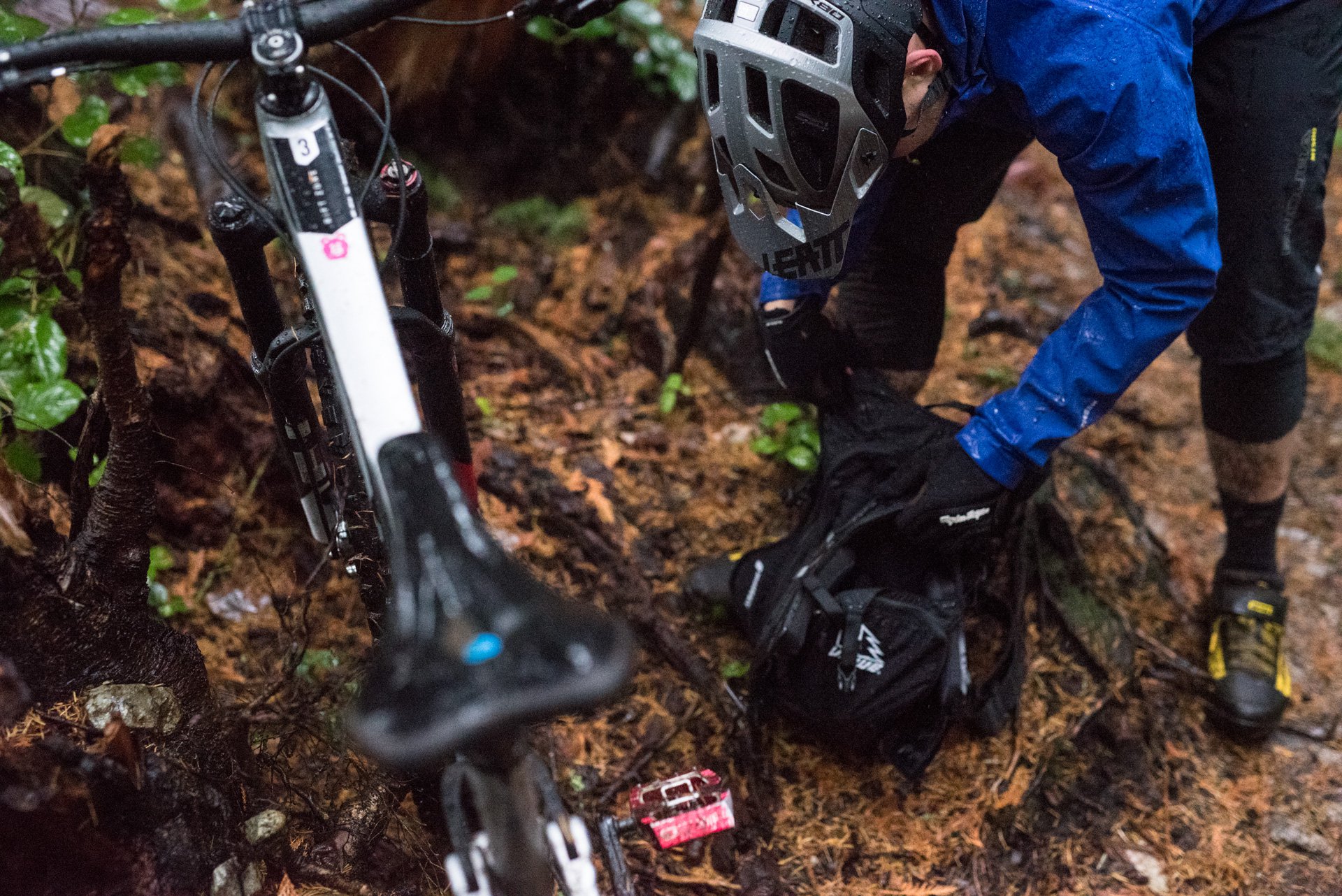 Space for everything I NEED for a two-hour jaunt or four-hour effort. Superfluous items make themselves noticed as soon as I put the pack on.

When I'm carrying my big camera or breaking in a bike and need a shock pump, I leave the USWE at home. For all other rides, the Airborne 9 has become my go-to pack even though I've had to accessorize with a couple of dry bags inside to manage the local weather.

In addition to actually living up to the marketing behind it - the pack stays put when riding down aggressive trails - it's extraordinarily comfortable as long as it isn't overloaded. Manufacturing quality is also very high as I'd expect from a 165 USD pack.

Looking for a pack that stays in place hammering up or down technical trails?

Check out the USWE Airborne 9 here.

I've been using an USWE pack for a few years now. The strap system is so good it ruins you from looking at other packs. For riders who hate wearing backpacks, this is the brand that might change your mind. I like that they make small packs too!

Which model are you using Wayne?

The model that keeps his boobs in place.

That's a nearly identical strap system as the Kriega motorcycle packs.  After trying countless bags, all of which flopped around in the corners, slid up during hard braking, and yet, somehow managed to still restrict movement at the same time, I finally found Kriega.  Ever since then, all that I could think is that I wish they made bike packs.

I will definitely be adding a USWE bag to my kit for the new season.

A total aside but the first Camelbak I ever saw in person was strapped to the back of a moto rider in the 90’s.

USWE makes a moto range too.

Enjoy your future pack; thanks for reading!

Just imagine if you could mount shoulder lights to those straps.....predator style.

I’d be the guy getting blinded by my own lamp cause I look around too much when I ride.

I did used to run my HID light on the side of the chin bar of my full face and preferred that to up to on shuttle rides.

I have the 15L version.  Only issues with the pack over the time I've used it are: the zippers could be made out of better materials. The inner mesh pocket with key clip could be larger.  My wallet barely fits in there with a set of keys attached to the lanyard.

Other than that it's a good pack. The padding on the back might be seen as a little dated or low tech compared to what you get in other disciplines or more established companies.

I find the pack really breathable (comparatively) because of the smaller surface are but it would be interested to try it with vented back paneling like Camelbak uses in the latest Mule.

Off topic but what pack do you use when you're hauling around a DSLR and lenses? I need a new pack for that.

It just drops straight into my Mission/ACRE 10L. I do keep it in its own dry bag for extra protection from the elements and crap in my pack.