It’s been a busy couple of weeks and I’m feeling pretty lazy. So I started looking through the old file system for something I could use that wouldn’t require any work. “Uncle Dave – Unused” seemed like a good start. I banged these out a while back and didn’t use them for whatever reason. Most likely because they are pointless ramblings. But that seems okay to me right now.

The first one is all new. The second is a bit of a bonus. Call it an out-take. It’s another answer written to the Old Man without the vasectomy. This answer seems better somehow. That guy already got a prize though, so screw him. I honestly still can’t believe that they gave him 5 Bike Park Days for that. And don’t hate me if I used “zeitgeist” somewhere else. I’m only human.

Oh. I think we’ve had some IT problems here. If you’ve written a question in the last month and not gotten an answer, please try again. There’s a good chance that we lost it.

And please, keep your hate in check. I’ve already told you these are some ‘B’ grade opinions. Yes, I suck at racing, that’s why I quit. Yes, mountain bikes are barely rideable unless they have tubeless tires. Yes, I’m an idiot. Okay?  Happy?

Should I try racing?

Sincerely,
Wondering if I should Race

There was a time when Uncle Dave raced bikes down a hill. It was long ago though, in a time when every mountain didn’t have a chairlift with dedicated bike haulers, and when downhill bikes didn’t work perfectly and last forever. So his perception of racing is a bit skewed.

In Uncle Dave’s time, he drove around the lower half of British Columbia with a clapped out DH bike strapped to the roof of his even more clapped out Subaru. He spent hundreds of dollars on gas and race entry fees and Wendy’s value meals, sleeping on couches and floors. He’d wake up at 6AM and drive to the mountain and line up for registration and line up for the chairlift, waiting for some high school dropout to strap his bike to the side of a creaky double chairlift with a bungee cord, hoping that his bike made it all the way to the top so that he could line up again for his mandatory training run before lining up again just so he could stand around for an hour waiting for the chance to race down on his bike for a few minutes.

Worst though, while standing around, he was forced to hang out with dozens of other suckers who weren’t all that great at bike riding either, but liked to talk about how fast they were and tell you about how they had shown up on Tuesday and managed to get 20 training runs down the course each day and you were left to wonder how could they possibly afford that brand new downhill bike as they obviously didn’t have a job of any sort since they were camped out at the bottom of a ski hill all week and why the fuck were they listening to Limp Bizkit?

But not only was he giving up prime summer weekends to stand around and wait to ride his bike, his weeks were consumed with planning the next weekend and faxing off race entry forms and repairing the crappy bike that kept breaking and phoning some asshole in California that just happened to have that spare part that he needed because why the hell would the Canadian distributor stock such a thing you ignorant lowlife?  And with the monstrosity of a bike finally running, well, you can’t risk riding it, lest the shock blow up again, leaving you bikeless for the race on the weekend.

And then, one race day, standing around at the top of the mountain, waiting for his turn to huck his carcass down the hill, thinking about the section that was pretty close to unrideable – the kind of section that you stop at the top of, and look at, and hike down, and hike back up, and look at again, and stop, and plan and look again and then finally close your eyes and let your brakes go and you careen down it and wonder how the hell you made it that one time and how the fuck am I supposed to ride that at race speed without experiencing instant death?  So, standing there and thinking about that and listening to smack talk and nonsense he decided that it really wasn’t all that much fun in the first place and he just hopped on his bike and rode to the bottom and loaded up the Subaru and never raced downhill again. (In hindsight, this may have been my Baumer meltdown)

But that’s downhill racing. Which is for suckers. Enduro is totally different and you should try that.

I’m what you might call middle aged, I drive a station wagon not a mini-van and don’t have a vasectomy, but you could still classify me as middle aged.

Over the years, I’ve done everything right. I bought a boutique hard tail to work on my bike skills, look cool and get fast(er). I bought an all mountain 29er, dropper posts on both bikes, tubeless tires and Stan’s all over the place and even bought some bib shorts. Somehow, I’m still slow and getting slower. So, what would be the best piece of technology for me to purchase to not be so slow. Fat bike? E-bike? Fat e-bike?

For me, the most interesting thing about this Uncle Dave project, is the window that it has provided into the mountain bike zeitgeist. You’re teaching me things. Most of you:

1) Have really boring questions (some I’ve even answered before).
2) Are hung up on issues of gear inferiority.
3) Want to tell me strange things about your bodies.

Today’s question kind of wraps all those things up nicely. Two of them I can’t really deal with though.

For many, many, many years, I questioned the tactics of mountain bike marketers. The ads were horrible and the science was dubious. Actually, now that I think about it, things haven’t really changed much. At least the photos have gotten a bit better.

So I’m still puzzled by what goes on in the marketing departments within mountain biking related companies. It feels like they’re doing a really terrible job, but holy shit are they doing an amazing job!  I mean, fly a few journalists halfway around the world and have them regurgitate your talking points verbatim and hype your new product?  And convince mountain bikers they need to spend more money than ever to get top-of-the-line products that they probably don’t need?  These guys are amazing. No wonder they don’t worry too much about truthfulness and science and  making kick-ass ads.

So, the marketing has convinced you that new products will allow you to defy age. And I can look out on the mountain biking product landscape right now and I can see a lot of products and gear that are really, really amazing and that will make improvements to the riding experience. There’s a lot of great stuff. But none of it is a necessity.

Bigger/Smaller wheels, depending on your perspective – Who cares?

Carbon fiber – This might save you some weight but carbon fiber is just a means to an end.

1x drivetrains – Pretty cool, but people have been getting 90% of this functionality for 10% of the cost for years.

Narrow/wide rings – Nice, but I still run a bit of a chainguide.

Clutch derailleurs – Nice, but I still run a bit of a chainguide.

Dropper seatposts – Revolutionary for some, but this saves me about 30 seconds 3-4 times a ride.

Tubeless – Nice to ride, not much fun to work with (Ya, ya, ya. This was Written pre tubeless shitstorm).

Wider bars – Honestly, motocross riders are starting to wonder why we’re encroaching on their bar widths.

Fat bikes – I have no idea.

Electronic shifting – This feels like a way to get rich people to spend more money on something.

Add this all up and it’s a pretty big deal, I will admit. All of this “stuff” has allowed some pretty great bikes to emerge over the last few years. But there’s still a lot of shit floating around out there. And despite all this “progress”, a great bike really hinges on a few key things:

Well. This is the advice that I would give to anybody under the age of, shit, thirty?  Thirty-five?

But of course you had to lob that age hand grenade into the mix and remind us that we’re all old and suck and all that. Of course you’re getting slower. Of course you kind of suck now. Of course you wake up the day after a ride and wonder if you’re going to be able to keep doing this shit. No purchase or technology or gizmo is going to change this. Except…

In addition to all that performance related age stuff, or perhaps because of it, I find that a big part of getting old is the ease in which I can slough off a ride. “I’ll go tomorrow. Today I have to do some totally boring, shitty thing instead.”  This is a battle that I fight now. But the solution to this is easy. Once a month, buy a fancy, shiny, new gizmo for your bike. Once the interest of that new things wears off, buy another one. This is what old age is. Countering our increasing lack of interest by spending money on things that we wouldn’t have dreamed of in our younger days. This is basically the founding principal of Capitalism and you have a duty to participate. 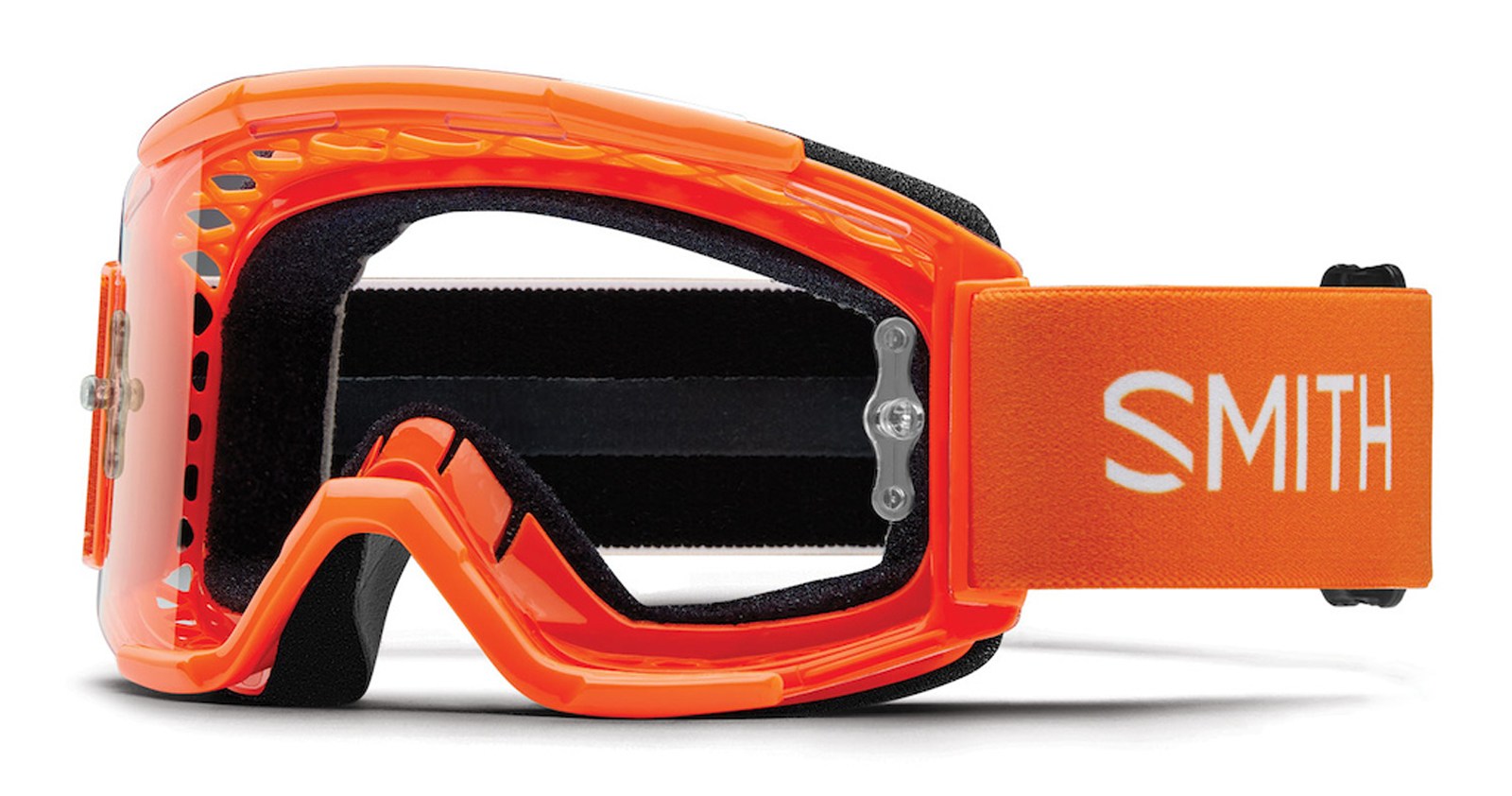 The Smith Squad MTB goggle will be released to the public in October, but Wisher will get a set now. Congrats!

Want to win a great prize? Send your questions to askuncledave@nsmb.com and you might get hooked up.

Do you have time to ride? Do you like to race?

I remember standing at one of those "sections" in a DH race on the BC Cup circuit thinking the same thing (maybe 11 or 12 years ago) and Shaums March rode into the section, hit a lip at the beginning, aired over the whole thing, somehow missed every tree mid-air, and landed on the other side. "Oh, that's how you're supposed to do it." Yeah right.

Enduro, its just like downhill but with a shittier bike and you have to ride up!

I am 49 and getting faster, downhill and sometimes uphill. You never too old to get skills and go faster…

I find that being really out of shape and a kinda shitty rider in my 30's has made my 40's much more enjoyable. Fitter and faster every year!

Dear Dave -
Based on your response to Soiled, I need you to come to the East Coast and perform an intervention for a half dozen of the group I ride with.
Of course the downside would be that I would have slightly less satisfaction passing them in the rock garden/log over/general gnar than I normally do on my clapped out 575 (Alu. single pivot - the horror!) with out-dated drive train.
( I say this, not to brag - I'm not that great myself - but to highlight their misguided focus.)