The white-hot fires of competition always breed innovation, and TRP looks to capture a little bit of that magic with their new TR12 12-speed drivetrain. Designed in conjunction with Aaron Gwin and John Hall, it looks to break through the duopoly and offer riders a fresh choice in shifters and derailleurs. Read on after the break for a full rundown:

Rippin`trails like there is no tomorrow. The new TR12 drivetrain system brings World Cup downhill shifting technologies to the trails. TRP is expanding its product line with a new 12 speed shifter and derailleur. The TR12 is the result of an intimate development relationship with 5 x DH World Cup Overall Champion Aaron Gwin and his personal mechanic John Hall. Along with the input given from Team Intense, Scott DH, Commencal 100% and YT Mob. In 2019, the TRP DH7 had over 300 racing days. This extensive first season was crucial for providing additional development input for the new TR12. 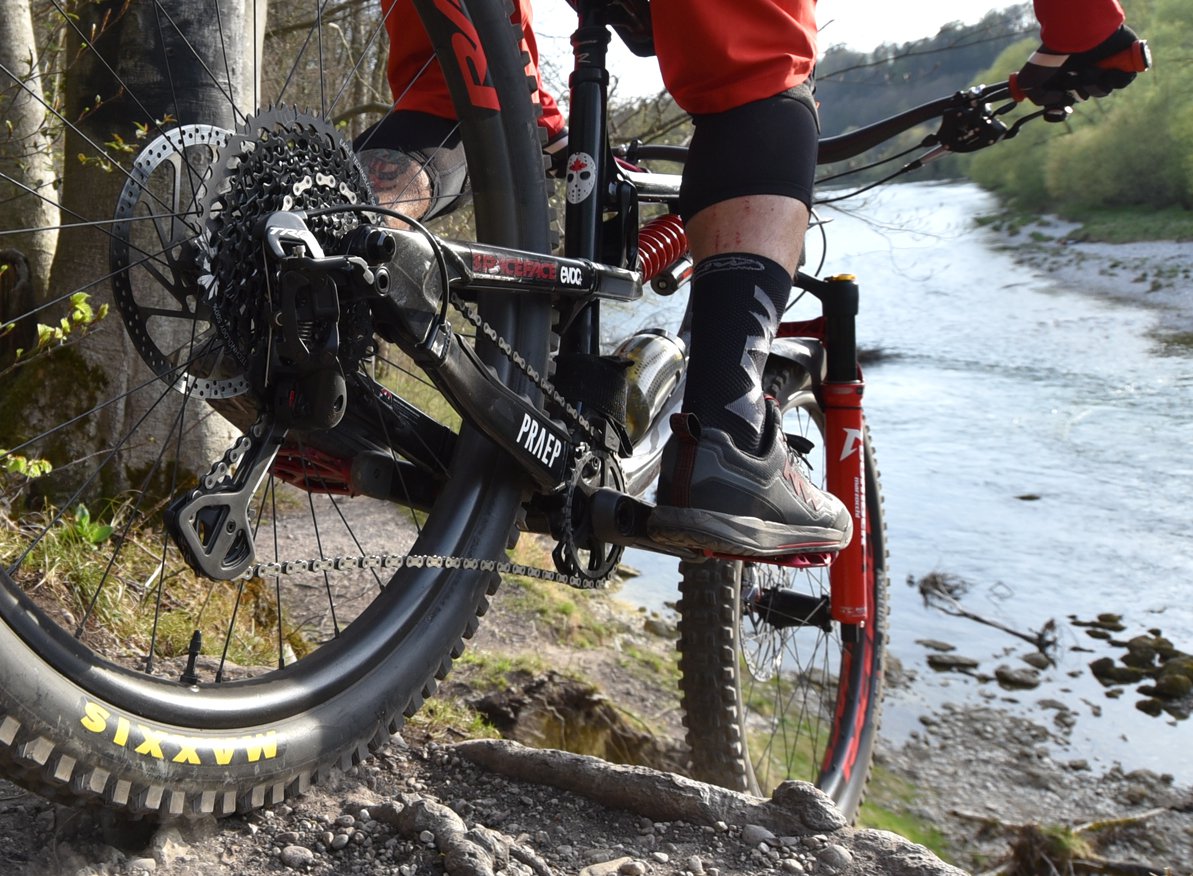 One key drivetrain feature that separates the new TR12 derailleur from the cycling industries existing products is the Hall Lock, named after Aaron Gwin’s mechanic, John Hall. The Hall Lock is a lever integrated into the derailleur mount, which locks the movement of the B-knuckle around the mounting bolt when closed. The Hall Lock can be opened to easily remove the rear wheel or closed to balance the stability and security of the system while deflecting impacts.

This key feature was born from an ongoing competition among the best mechanics on the Downhill World Cup circus - to build the quietest bike on the track. John Hall identified the movement of the derailleur around the B-knuckle as a key point of improvement for several reasons, which are punctuated by removing the noise caused by chain slap and increasing shifting accuracy. Features well appreciated for rough trail riding. 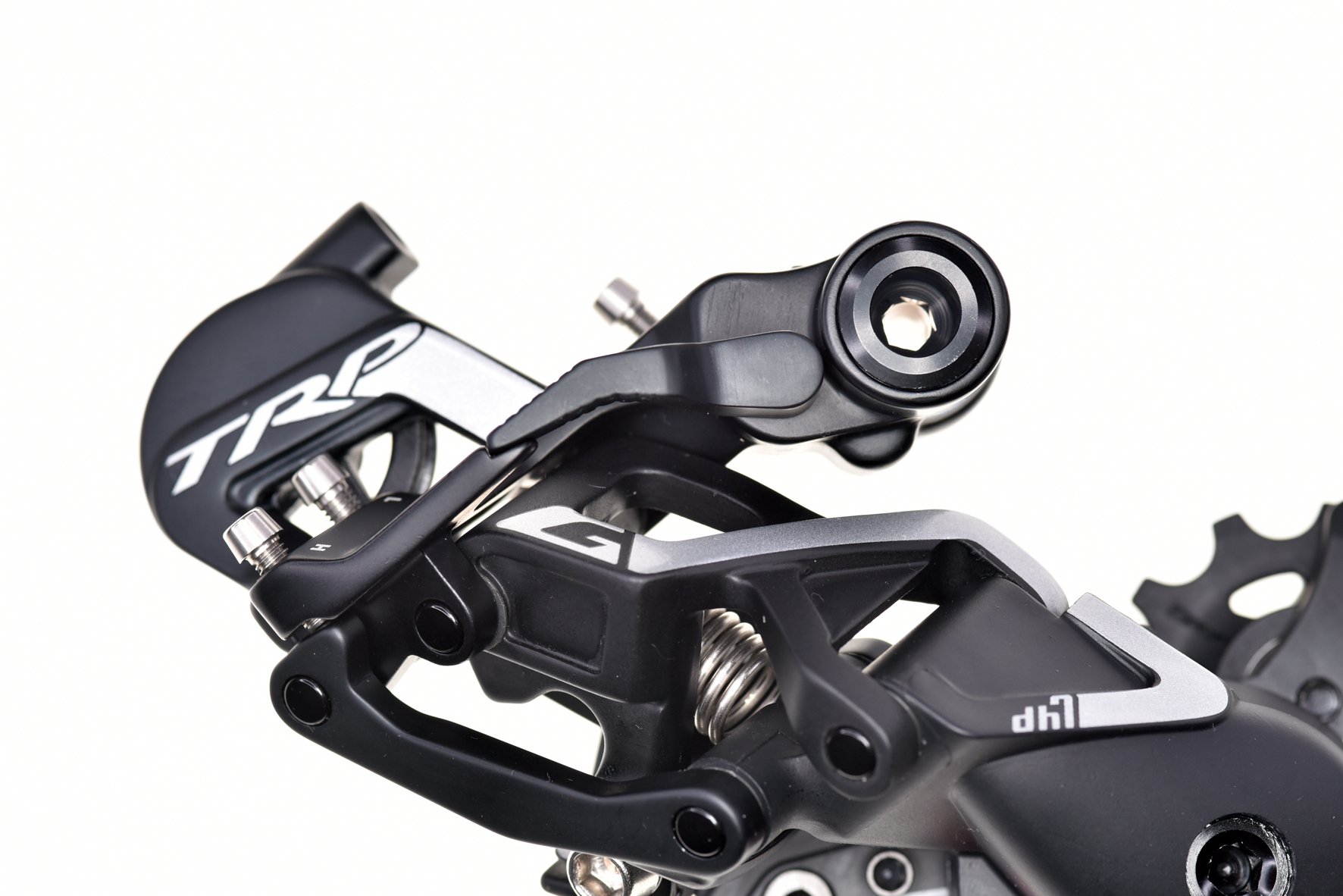 A second key TR12 derailleur feature is an adjustable ratchet-style clutch. Depending on the suspension layout of the bike, there can be different amounts of chain growth. This is why the team designed adjustability into TRP‘s ratchet style clutch. If a rider wants to free up the system, they can back off the clutch to balance pedal feedback with chain retention. This provides the ultimate personalized feel as the drivetrain works in unison with the suspension set-up and riding style.

The new TR12 rear derailleur is able to provide a quiet and accurate ride over the roughest trails. The key feature to this pursuit is the Hall Lock. During the Race season, lead mechanic for Intense Factory Racing, John Hall, noticed excessive movement around the b-knuckle when riding over rough rock gardens and in tracked out corners. This was leading to more chain skipping and slapping creating possible variances in shifting. This inspired John’s idea to lock the B-knuckle to the bike’s derailleur hanger. TRP engineers worked closely with Hall to create this feature, The Hall Lock. The function is integrated into the derailleur. When working on the derailleur or changing the wheel, the Hall Lock is opened. Closed while riding, the derailleur is locked to the frame and thus stabilized in the roughest conditions. This feature maintains accuracy in shifting and superb chain retention by not allowing the derailleur to rotate excessively away from the cassette. Its clamping force can be adjusted to balance stability and security while the derailleur deflects impact. 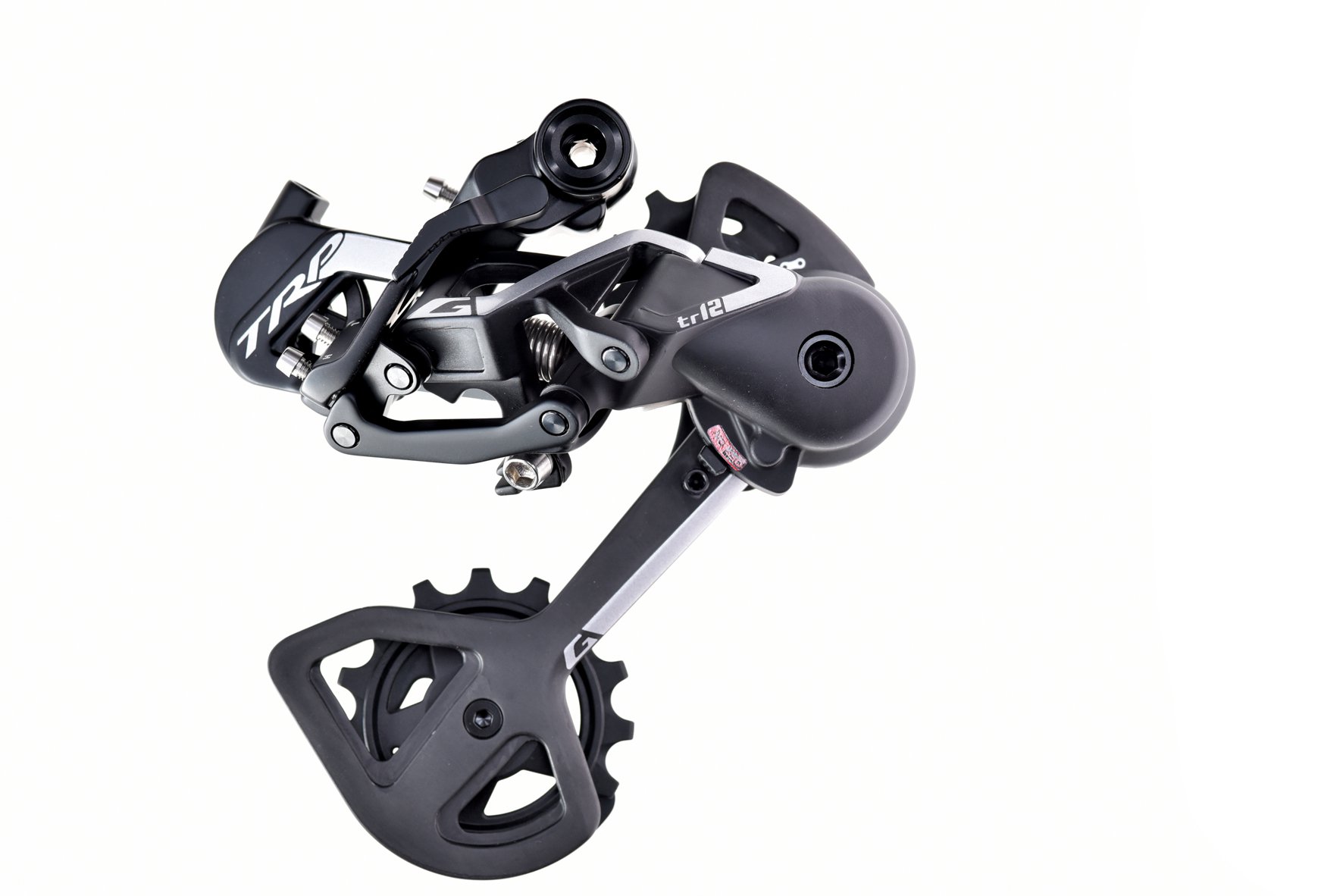 Ergonomics are key to Aaron, which is why he wanted something a little different. As a result, TRP engineers looked at the cable release lever’s ergonomics and devised a system to move it in a linear path to mimic the motion of a rider’s thumb, rather than rotating it away. This unique positioning allows for a more consistent contact patch providing overall better grip and shifting performance when the trail gets rowdy. 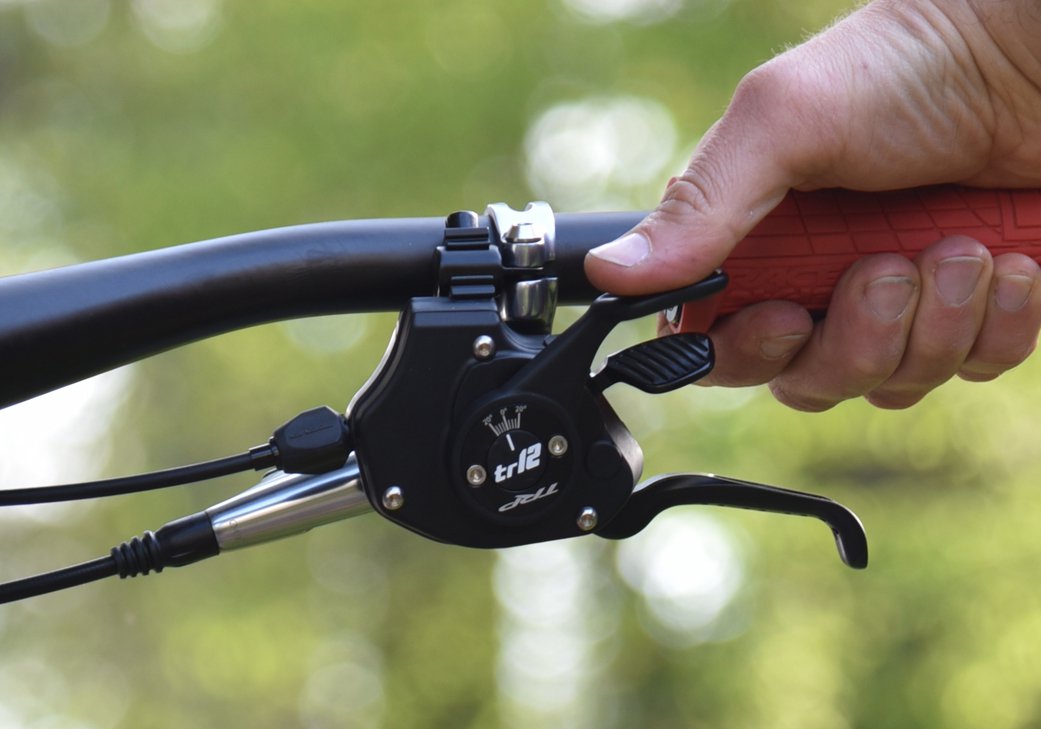 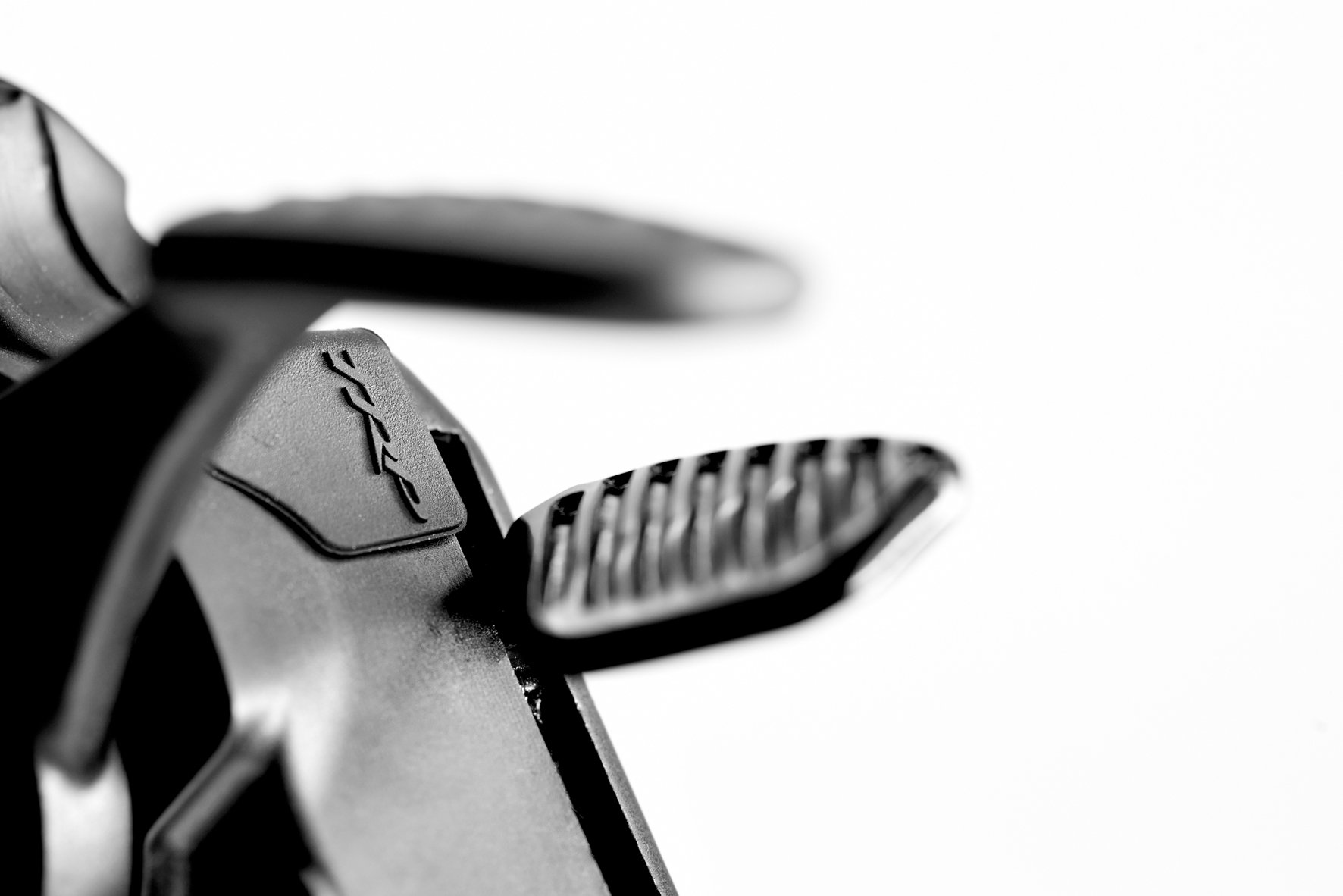 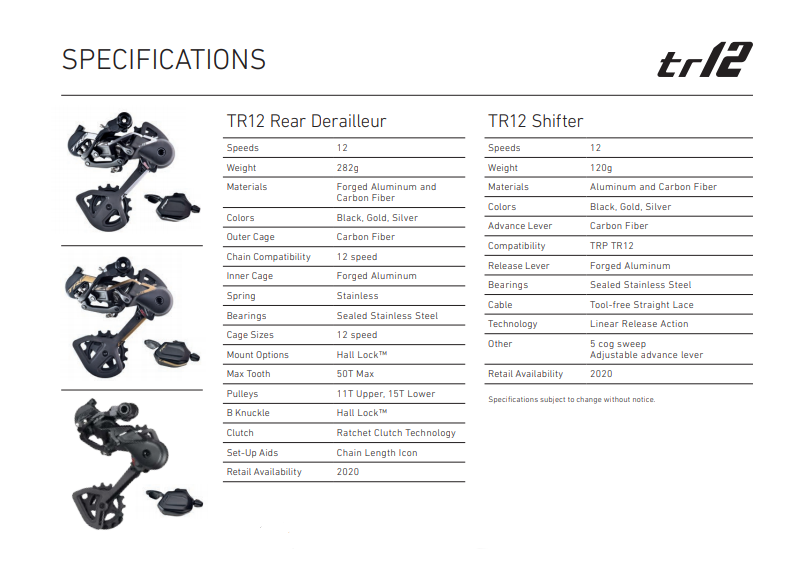