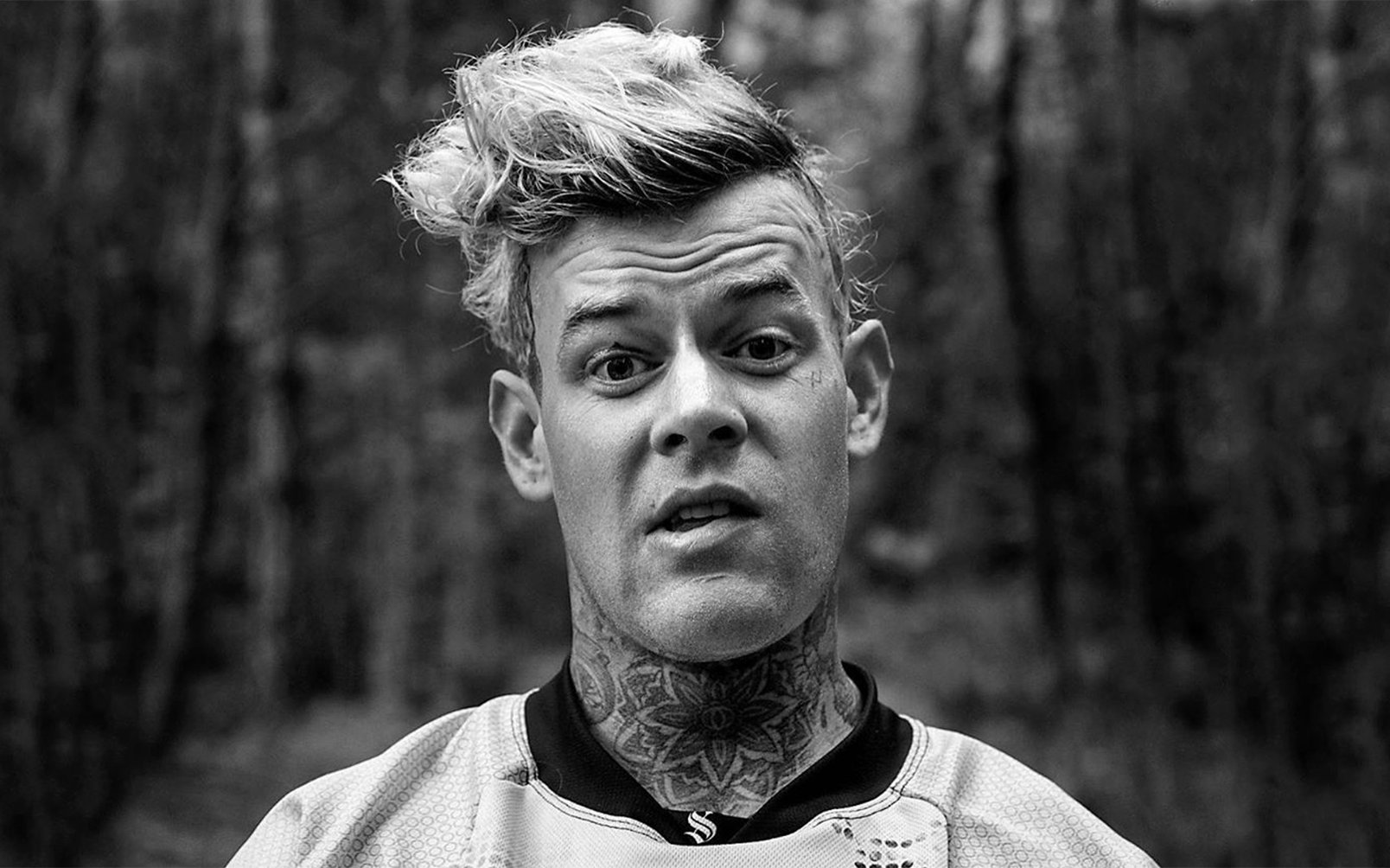 I learned something telling about Jordie Lunn's life last night at the Chasing the Yeti premiere talking to Darren Berrecloth. Most of us realize that anything we see on video appears vastly tamer than it is for the person behind the bars. I'm not talking about 5 or 10 percent more difficult in person, but an order of magnitude.

Despite this we believe our eyes, and evaluate our heroes with an unreasonable emphasis on flat screen-perceptions that are based on personal experience, which often has no relationship whatsoever to the moves we see our heroes are pull. Jordie is one of the few who pushed it far enough to break through those second hand visual limitations.

He wasn't interested in what you'd already seen. The first man to pull an inverted 7 on a mountain bike (360 backflip - if you will), learned that pushing the envelope inspired riders of all stripes, and his Rough As Fuck video series was the fully formed expression of of that. The segments left riders uninversally gobsmacked.

Watching video and, even more so, seeing stills, gave me a significant appreciation for how mind-blowing Jordie's iconic ride down the tree must have been. But Berrecloth put it in perspective.

"The Claw" told me that he called Jordie after he saw photos of the tree stunt, and tried to talk him out of attempting it. "Doing a gap or a step down is one thing. You could break a leg or something, but this was different." Berrecloth knew instinctively that a misstep could mean death, and he said as much to Jordie.
There was no dissuading him of course, and Jordie dropped it and rode away smiling, and without injury, if you don't count testicular lacerations.

If Darren Berrecloth tells you something is too dangerous, in a situation he hadn't found himself in before, and you are able to press on regardless, you deserve a medal. Or maybe incarceration.

I'll pick the hardware for Jordie.

Jordie, who sadly left us on October 9th riding his bike in Mexico, was a much-loved character. After seeing the tributes of those closest to him, it seemed the best way to remember him was through their eyes.

Some common themes emerge. Every one of Jordie's friends remember his humour, his sweet character and his ability to make everything fun. He touched many lives and managed to live more in his 36 years than most do in 100.

The word gets tossed around a lot, but the man was a mother-fucking legend. Here's what those closest to him had to say about his life and his passing.

“The sketchiness of this tiny landing adds value to your photo. It’s extra cash if you ask me.”⁣ ⁣ ⁣ “Ballin-on-a-budget is hard work but you always start with sick rims.”⁣ ⁣ ⁣ “Don’t worry if you blow your shot. I’m going to shoot the same angle as you and it’s going to be better. What settings should I run?”⁣ ⁣ ————⁣ ⁣ I remember all the times, gasping for air through violent ab contractions, the laughter you often sparked was intense. Damn, you made us howl!⁣ ⁣ Whether you were working on a new trick, coaching younger generations, throwing down until I was happy with my shot, or letting loose with the crew, you put in 110%. Your costume game was untouchable (Randy, TPB), karaoke performances topped charts (Rod&Gun), and we all held our breath while you explained the rules for the next sketchy-urban-night-jib-challenge. It was difficult to not be inspired by your presence. We all looked up to you. ⁣ ⁣ @jordielunn - Thank you for being a real G. Thanks for all the bear-sized hugs. Your massive global wolf pack misses you. You were an incredible friend with the warmest heart. Rest in Peace brother. ❤️#longlivejordie⁣

On weds we all lost an amazing human, he was more than a friend to me. He was an inspiration to never do what people expect, to follow your own path and be true to yourself. We both grew up in a small town and both loved to ride bikes, get rad and send it on anything we could get our hands on. In ones life you only have a few opportunities to get to know someone like jordie and I’m going to cherish all the memories we made together. Growing up at his house with his two other brothers and Bdog was nothing short of a riot, we were constantly lighting each other’s hair on fire, jiffy marking each other’s face when someone passed out early. We travelled the planet together doing what we love, riding bikes and having sport drinks🤪. I remember one morning in Europe waking up and opening my eyes to jordie with his arm around me as the beds were tiny and he must of rolled over in the middle of the night😂. Oh George you were one of a kind. The first shot was taken no less than a hour before he crashed. He got a shot of me with my @gopro and I was like dude get yer ass up there I’ll get a shot of you cuz that’s a sick shot. We were both jacked on the pic as we’re always hustling for shots on the gram. He died that day doing what he loved. Not many people that have lived on this planet could say that and that gives me some peace 😊. He died in my hands and it gives me some peace that he was with a loved one during his last moments. Death is a stark reminder to never take anything in life for granted, love yourself, love your family and your friends. Life is precious. @jordielunn you were as good of a friend as I could ever wished for, I’ll miss you bud. #longlivejordie #longlivechainsaw

You wild magical man - I was so proud of you. You brought true magic to anything and everything that you touched. The Lunn family was Mountain Biking and they let us run wild - dig the yard, coach the kids and shape the future... travel the world. We raced the races, even if you were broken - you were so tough - or stubborn... You oozed creativity and we cut our teeth trying to do cool shit - The Jordtronjumpathon, Peanut butter knife fight, Fresh Air... We made something for the friends. You thou, my friend were a true original. Thanks for the random FaceTime calls no matter where we might have been in the world and thanks for being the most loving man I know. The “soft kiss” was unforgettable. You changed lives and we need more of you in this world. Now, come over and get your shitty cut-off sweatshirt you left at my place - the white tights and towel made a ton of sense for the party but I can’t fathom this is real. Tell stories. Ride your bike. Hug your friends. Jordie was a brother. 📷 @toneboneroams @harookz

One of the kindest and most humble guys with an infectious riding style & time for anyone! We miss you Jordie! ❤️ #longlivejordie #ytfamily

Jordie Lunn, golden heart and soul, hard to see you go. Thank you for charging so hard over the 20+ years of your career. Thanks for raising the bar in our sport. From Ride to the Hills, to Roam, to slope courses worldwide, through the Fest and onto your Raw AF’s…the path of legend! For your smile and laughter, that glowed of what was inside. Your circle of friends and family that love you is world vast. For your endless energy and stoke for the groms at SGC, I’m sure they laughed and learned a lot about life being near you. Thanks for showing us the better pace in life, keeping it light, but always gettin’er done. for wearing a pink glove when you golf….cuz you had mad style and didn’t give AF. #longliveJordie post 1 of 2.

Jordie Lunn, golden heart and soul, hard to see you go. Thank you for charging so hard over the 20+ years of your career. Thanks for raising the bar in our sport. From Ride to the Hills, to Roam, to slope courses worldwide, through the Fest and onto your Raw AF’s…the path of legend! For your smile and laughter, that glowed of what was inside. Your circle of friends and family that love you is world vast. For your endless energy and stoke for the groms at SGC, I’m sure they laughed and learned a lot about life being near you. Thanks for showing us the better pace in life, keeping it light, but always gettin’er done. for wearing a pink glove when you golf….cuz you had mad style and didn’t give AF. #longliveJordie post 2 of 2.

Jord... man I miss you dude. We shared so many insane times together. When you invited me to come live in Parksville with you, I never could have imagined how our lives would intertwine after that. We moved into an illegal basement suite in Lynn Valley where the landlord opened our mail, and came into our suite to turn off the TV because Craig fell asleep on the couch with “The Rings” playing late at night. We moved into Chesterfield Ave, where we would hold legendary parties, and act as a half-way house for riding friends passing through town. The years we spent together in that house were life changing. Filming riding segments with you was always insane.... your style was beyond unique, and you would always do something nobody had ever seen! I’ll never forget “Fresh Air” at moms house. Half of the riders were scared to ride the course because of your wild wood stunt at the start....Thanks for showing me how to be myself, and not give a fuck what other people think. You inspired me to think outside of the box. You inspired me to never give up. You inspired me to be rad. I’m so thankful to have shared so much of my life with you. Every moment with you was unforgettable; unbeatable. Save me a spot on the couch in the sky, and we will watch Trailer Park Boys until we pass out. Love you Jord. Bonnie, B-Dog, Caitlin, Craig, and Jarrett; I am so so sorry for your loss. We will always have the unforgettable memories that make us smile, make us laugh, and make us proud; thanks to Jordie ❤️

Jordie Lunn was not just some epic mountain bike stunt rider, YouTube star, podium worthy athlete or an Instagram doubleclick, for us at Kali, Jordie Lunn was family. Lost, but not forgotten. #longlivejordie #longlivechainsaw

Well said , Cam.  Thanks for this article. Glad to hear that the Claw was true friend to Jordie in the end as well as all the other Pro riders that loved him and were inspired by him.  I'm sad that he's gone.