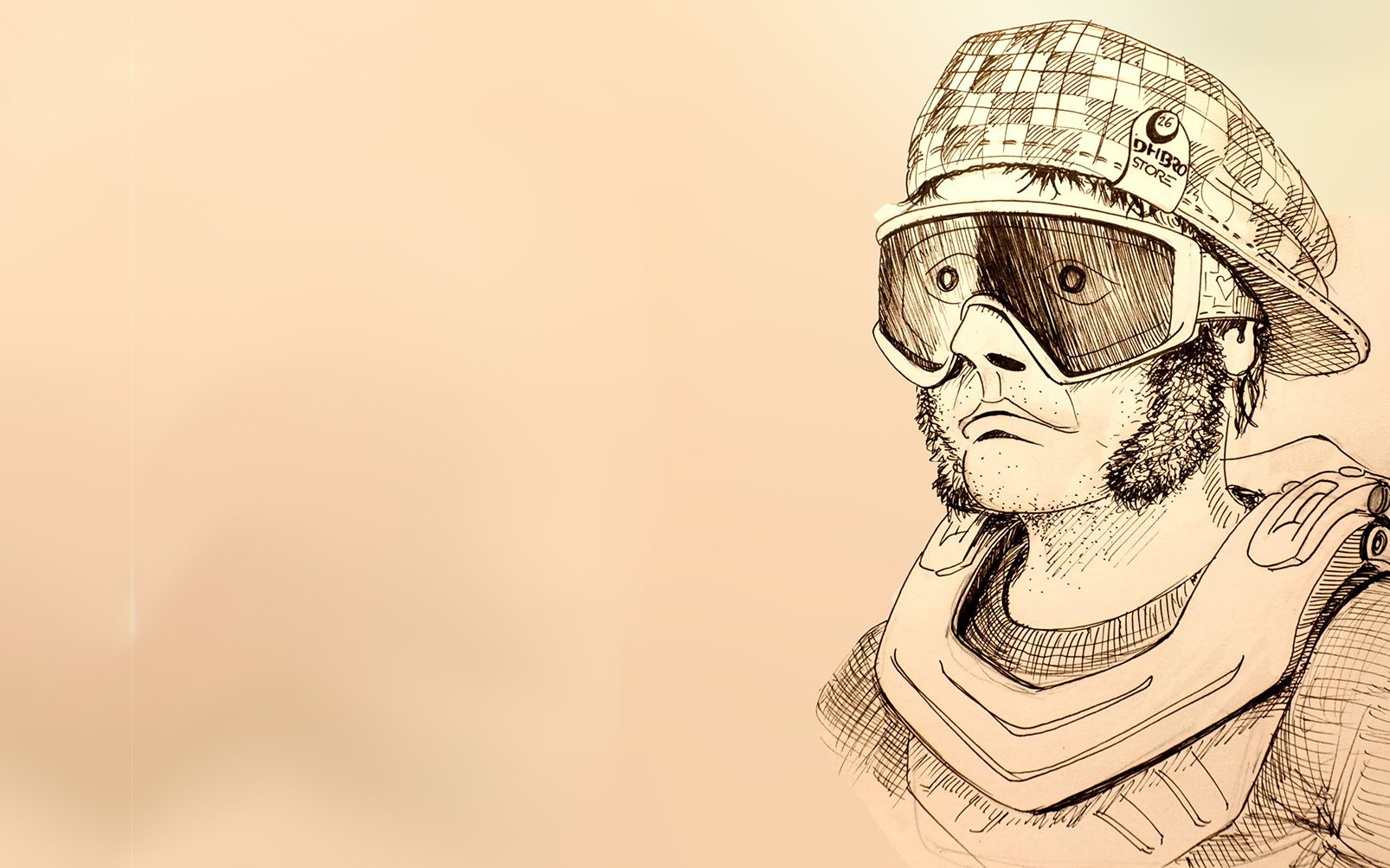 Too Old to Wear a Flat Brim

You brilliant fashionista you... I have a question:

I was informed the other day by a co-worker that since I am older than 35, and have children, I am no longer allowed to do two things when it comes to head wear choices: 1) am not allowed wear a flat-rimmed hat 2) nor wear a hat backwards.

So what was my natural response you ask? I wore a flat-rimmed hat backwards to work the next day.

I disagree with this assessment, but what say you? Are there certain fashion choices that fathers/>5 crowd are no longer to partake in? Does this mean that my leopard-print yoga pants are taboo? My one-piece ski-suit is outlawed? Is it possible that wearing my flat-rimmed hat while driving the family mini-van will scare the shit out of a hipster as I drive by with Raffi blasting from the sound system?

Yours truely,
Young at heart

Oh man. You just ruined the week for the lady of my household. She hasn't even read this shit and the psychic waves produced by my writing it are subconsciously giving her fits. She's dropping things...keeps looking over her shoulder...and she has no idea why. An actual conversation we had this weekend centered around why I owned two jackets with camouflage on them (If you must know, Cam gave me a puffy Dakine that nobody else in the NSMB orbit would touch and that I wear to take out the garbage, and one of my old coats had a camo lining. They're both now available at the 4th Avenue Salvation Army if you hurry). There will be some bemused expressions when she finds out that I'm handing out advice on how to dress. 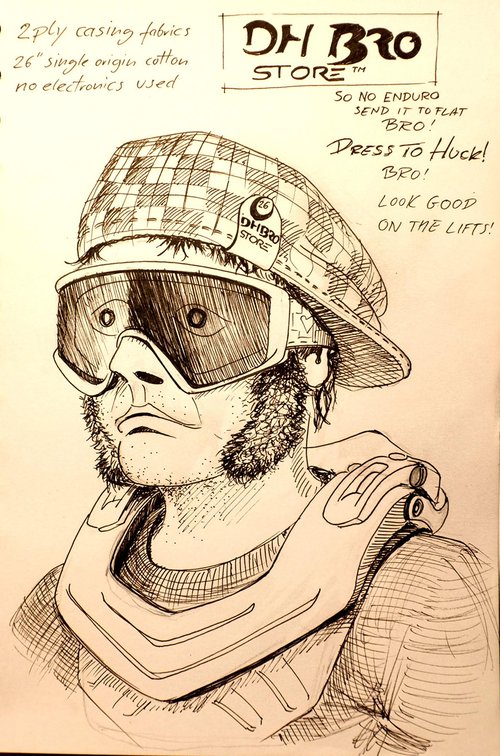 Regardless of that, I'm worried here. About you. Yes, we're only talking about a hat with a brim that is potentially a teensy bit too straight. Maybe it covers your ears a smidgen as well. Probably this hat isn't going to be the end of the world and you could wear it without too many problems. But let's extrapolate things a little bit further. Picture the quintessence of the awful that hat can bring to the party. Close your eyes and picture the middle aged bro, straight outta the suburbs, hopping out of his pimped out minivan, rocking what I just decided to christen as "Monster Truck Fashion". He's got some hideously overwrought denim on, coupled with some DC shoes (oblivious to their legendary history in skateboarding), a Fox Head shirt (most likely unaware of all that they've done for motocross), and the cherry on top, capping it all off (ha ha, I didn't even mean to do that): a flat brimmed Monster Energy baseball cap (unfortunately all too aware that they are in the business of manufacturing sugared up piss water). There could even be some frosted tips or some shit lurking under that hat. You've seen this guy. You've laughed at him. You tell yourself this will never be you. But how did he get his start?  How on earth did these trends get so co-opted that middle aged assholes are wearing shit that should be nothing more than a source of embarrassment to some present day teenager scrolling through his family photos twenty years from now?  Why is it now acceptable for adult humans to dress this way?  Would our parents have ever done something like this?  Jesus Christ, no.

Before we get too far, let me just point out that there is nothing wrong with flat-brimmed baseball caps, per se. It's just one more thing white people appropriated from black culture and that Justin Bieber ruined for everybody*. No, the problem here is "cool". Our insistence upon pursuing it when we have no business worrying about such things, and no idea what it actually means. "Cool" is the domain of youngsters, with nothing better to worry about. "Cool" is what happens when you have no job, money or pastimes, and nothing but buckets of concern for what all those other assholes think about you. When your personality isn't developed enough to hold the attention of some fine young lass or lad. "Cool" should not be a consideration of anybody past the age of thirty-two. And kids?  Forget about it. You think your kids give a shit if you're "cool"?  No. They don't. It is only possible for them to think one of two things:

1) I'm ten years old (or younger) and my Dad is the coolest guy in the World.

2) My eleventh birthday was yesterday and holy shit are my parents weird.

Or...you know...there's some other options...but whatever. At no point do they think "Man, wouldn't it be awesome if my dad started dressing like the older kids at my school did five years ago?"  They're never excited that you scored some sweet kicks on clearance at Winners. Whatever you're doing, no matter what it is, it's the definition of "not cool". So stop trying. Stop pretending. Start acting (somewhat) your age. Accept that you're old and you're boring and that nobody thinks about you that way any longer. The best you can really hope is that the thing that your neighbours and the people at work make fun of you for is something other than your clothing. Hopefully they focus on your bad breath or your poor job performance instead. Getting rid of the flat brim is the easiest way to make this happen. And my god, is it ever a straight forward process to do so.

Step 1 - Look at your baseball cap. Does it have an actual logo for a baseball team on the front of it?  No?  Throw it out.

Step 2 - If you still have a hat, grab the sides of the brim with each hand. Subtly curve it a bit. Just oh so gently. We're not trying to curve it like some mid-90's hockey player living it up at the Roxy. We just want a tiny bit of a curve in there, so it follows the contour of your head a little bit.

And just consider. Who do you want to be when you grow up. This guy? 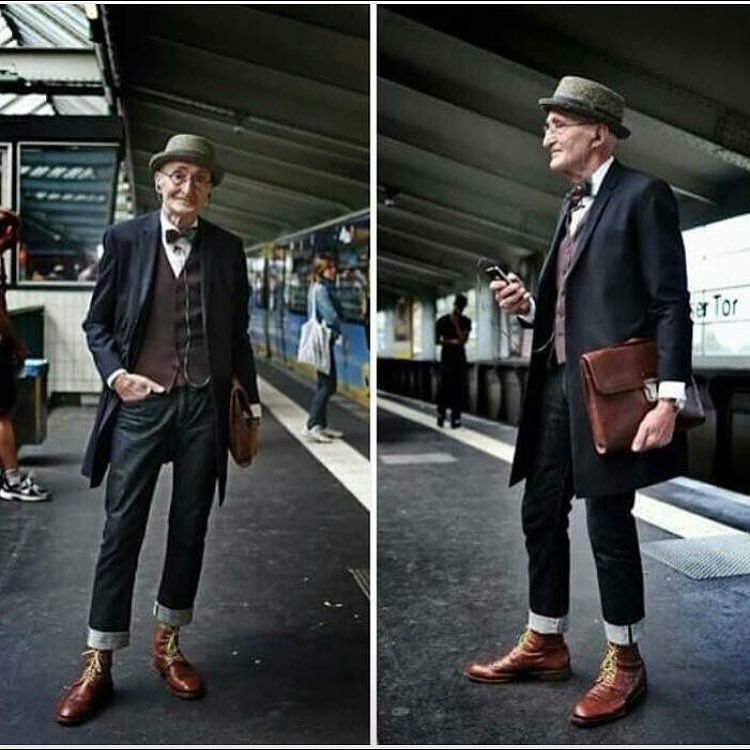 Take your pick. (the internet thinks this guy is 104 but apparently he's closer to 70) 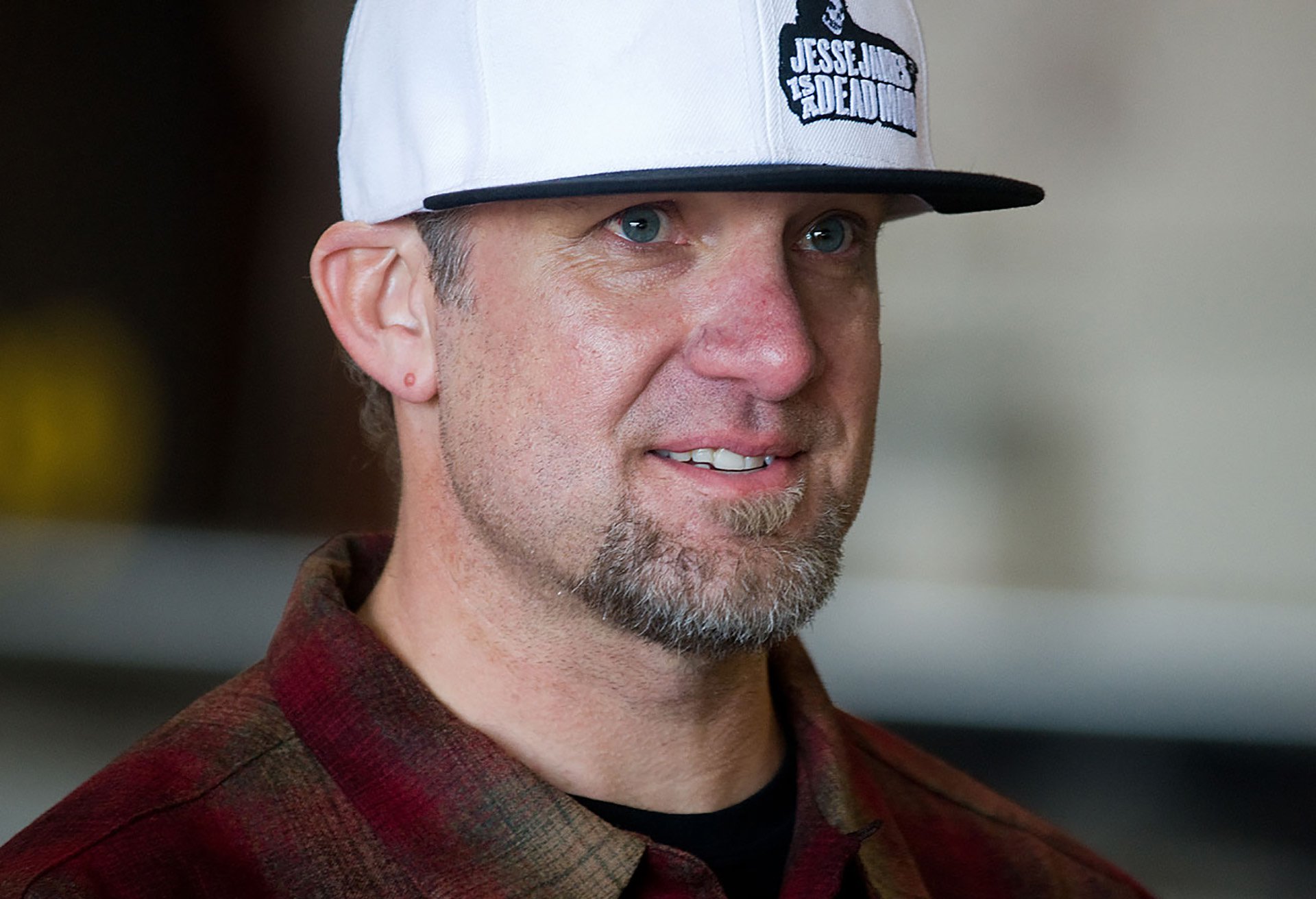 If you're happy losing a wife who is thousands of times too good for you, by all means, keep the flat brim. 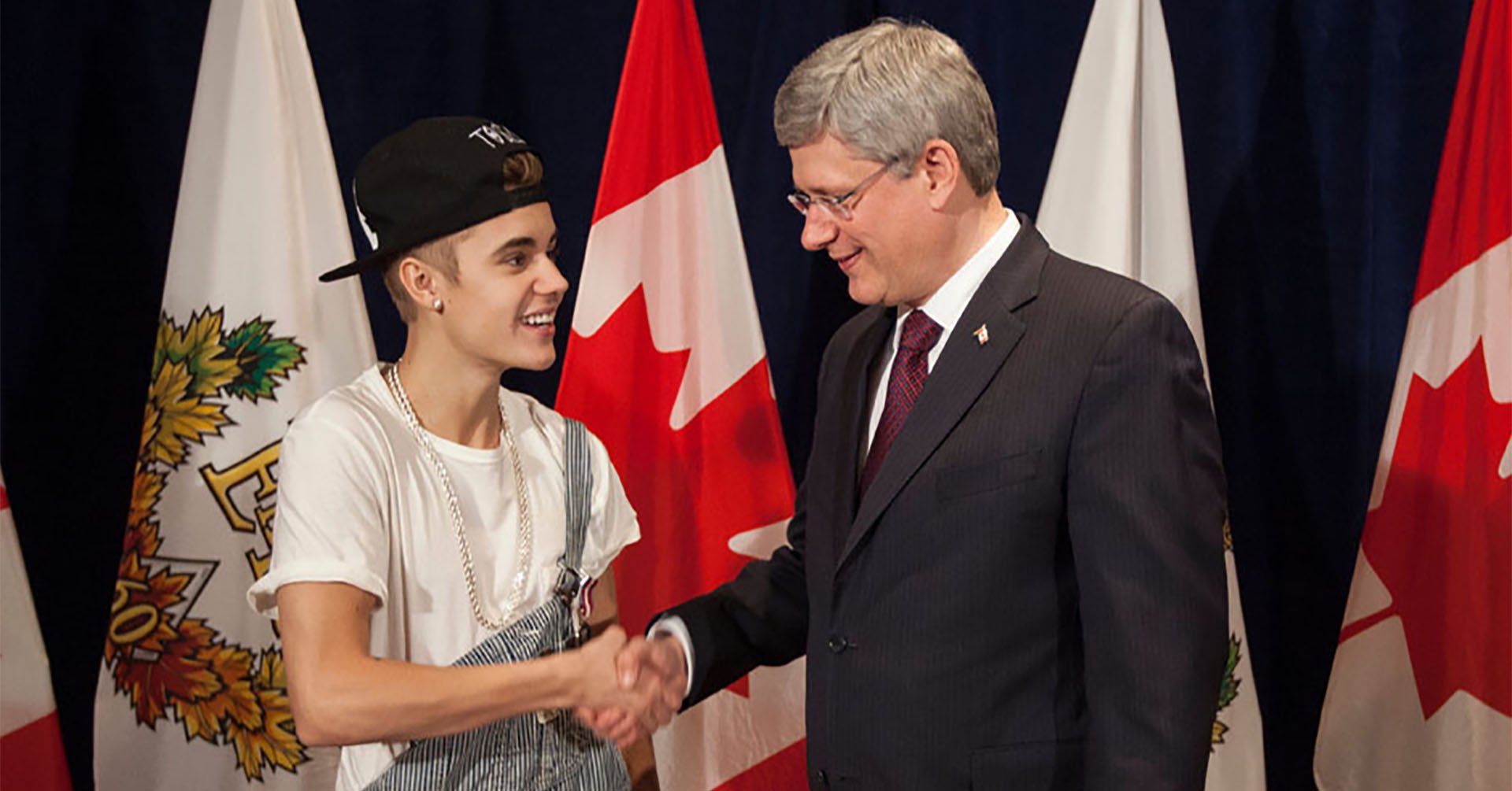 I'm actually pretty jealous of a band like Liars. They're a group of dudes who are so out in front of trends, they can just throw it all away to move on to the next thing before anybody else has caught on. Consider They Threw Us All In A Trench and Stuck a Monument On Top. They flitzed in and abandoned dancepunk before The Rapture knew what was happening, and moved to the woods in New Jersey and made an album about witches. And only then did shit start to get a bit weird, when they started the "move to Berlin" thing and created a drum based something or other. But it wasn't until after that, that things started to really come together. Liars is easily their best album. For the most part, it's a lot of ugly noise that comes together in the greatest possible fashion. See "Plaster Casts of Everything" for an example of this. Put this on before you crash your car into a building. The actual video seems mildly NSFW.

Liars - Plaster Casts Of Everything

But then you have songs like "Sailing to Byzantium", which show a musical side to all of the noise.

And "Clear Island" is just a great song.

Of course they dropped all that and moved on to some other shit which I can barely keep up with so I stopped trying. "Scissor" is pretty great, though.

Congratulations, YAHs, you've won a prize pack courtesy of Race Face consisting of a Stash Tool Wrap, some Indy compression socks, and a Shooter belt. And we're happy to say that even though two of these things are wearable, neither of them will make you uncool if you wear them to the wrong place. Well, except the belt. You can wear it with jeans to a block party, but only if you also wear your flat brim. Drop us a note with your address and phone number and we'll get you hooked up.

YAHs, you win a tool (and tube) wrap, compression socks, and belt (for riding!) from Race Face. Congratulations, and thanks for sending in your question.

Have you got a question for Uncle Dave? He likes questions, just not always the ones you ask. In two weeks, we'll be giving away a sweet Suntour Auron 34 RC2 PCS to the winning question. Just send your questions to Uncle Dave, and make 'em good ones.

Here are a few highlights of our next big prize:

The Suntour Auron 34 RC2 PCS is a sweet piece of frontal machinery that costs a little less than some of the other forks in its category. Not Boost you say? Well, lots of people thinking about a new fork aren't running Boost, so this is a cagey move by Suntour. 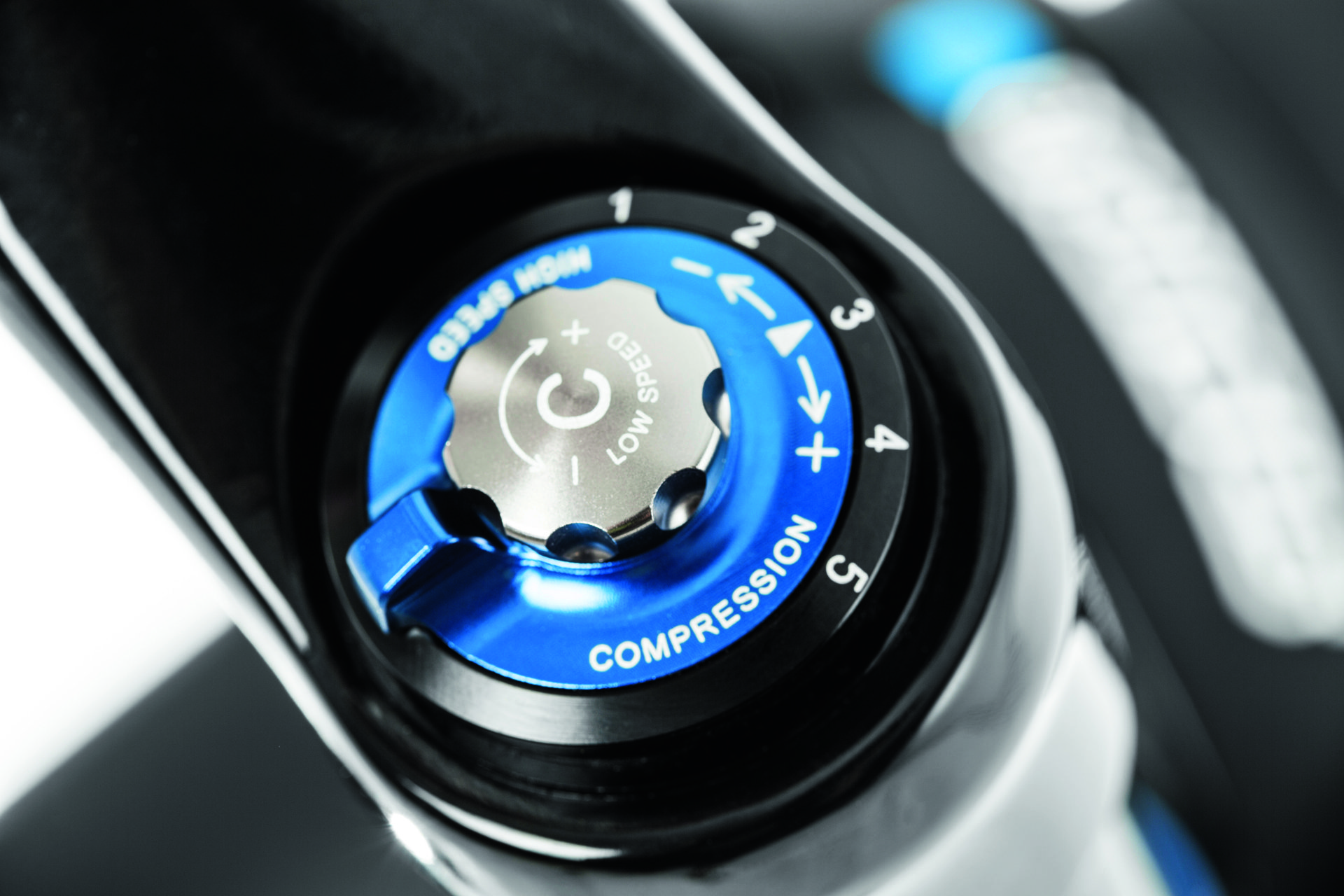 34mm stanchions contain a coil negative spring and the ability to tune air volume with pucks. Plus high- and low-speed compression damping and a new RC2 damper. This is a lot of fork for the money.

"If you still have a hat, grab the sides of the brim with each hand. Subtly curve it a bit. Just oh so gently. We're not trying to curve it like some mid-90's hockey player living it up at the Roxy. We just want a tiny bit of a curve in there, so it follows the contour of your head a little bit."

And badaboom, you're not trying to relive your youth.

Hat tip... in both senses of the word.

Thank god mine is subtly curved!

fashion is so painfully nuanced. i believe i'm sporting an acceptable degree of curvature for my age as well.

And, they won the hat trick of prize packs...irony?

Huh! I never knew about that first one.

Man, and I had you picked for my sports trivia team, hands down. Now I'm not so sure... 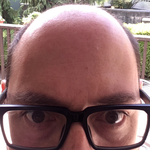 Priceless photo of Bieber and Harper. The devil must have been just out of frame.

If you do not like that odd uncomfy feeling of a flat brim, give it a subtle curve.

You are a mountainbiker. You are the epitome of awesome. Act like one.

Lets get real though, MTB has THE WORST style out of any of the "extreme sports" so worrying about hat brims is fun but rediculous. How about the big ugly chunky 5/10s, the funny lil socks, the awkward fitting nerd shorts, and goofy jersey. ALL of which with a contradictory pattern.

I wear a flat brimmed hat, and it doesnt have a monster logo. Laugh at me if you want but I can pull it off. Trick is to stay away from youth brands

I really, thoroughly enjoy Dave's entire view of 'coolness', and how it pertains to fashion. Again, the most concise explanation of why coolness even exists as a phenomenon, and who should care