I was searching for an e-mail the other day and I stumbled across one that I wrote about 10 years ago. In a nutshell I had gently poked fun at a friend for going to see the Pixies at the Plaza of Nations, rather than coming along with us to see the Unicorns at the Cultch.

(It’s kind of funny that I even bother mentioning actual band names in this article, but it feels important to me. Deep down I’m hoping the readers will understand how insane that decision was, rather than thinking “what the hell is grandpa talking about?”)

Within two e-mails the conversation had devolved into a passionate and nasty eruption of crazy. It was just totally insane. And as I read through it, all I could think was “Man…I don’t care about anything this much any more.”

And perhaps that’s what “getting old” is all about: realizing that trivial shit isn’t all that important. 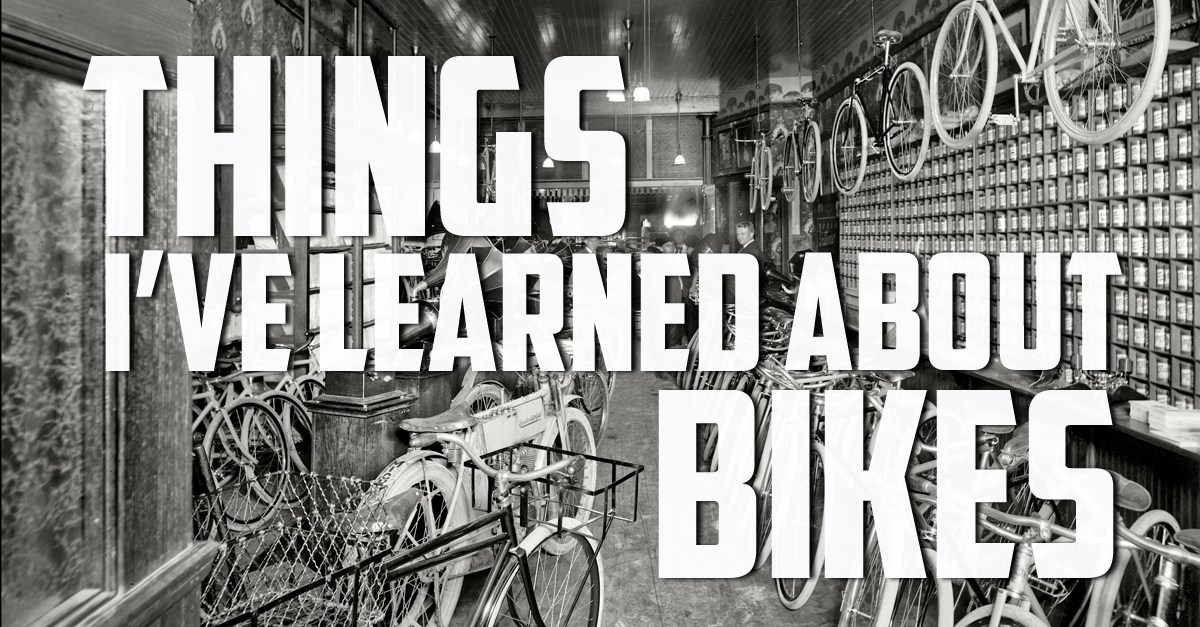 So it goes with bikes. When I was a kid, bike shops were my babysitter. I could sit for hours in a bike shop and just stare at bikes, ask questions and annoy the mechanics. I knew every single bike and part available and roughly what it cost (this was easier to do back in the day).

Same thing with bike magazines. I’d tear into them and digest them cover to cover. Probably my favourite thing was the mail order ads in the back of MBA. I’d lust and build my dream bike in my head and get really concerned about whether this bike would have an Answer A-TAC or a Syncros stem.

Now, I dread going in to bike shops. I’m impatient when new things come out. I want a bike that is simple, reliable and that performs well. I don’t need the latest and greatest and, to take it a step further, don’t really trust it or want it or agree with its existence. In short, I’m a crusty, crotchety old bastard afraid of new things.

However, I will admit that I know how to set up a bike. I’m not quite at the brewing-my-own-lubricants-at-home or removing-balls-from-bearings-so-they-roll-faster level of a European ProTour mechanic, but I can set up a bike that looks and runs well.

So, I was thinking, it’s time to start passing along some of this wisdom to the whippersnappers. And I reserve the right to totally change my mind on some of this stuff.

Rule #1 – If the primary upgrade over last year’s bike is a new graphics package, think about looking elsewhere. If you buy that bike, when next years graphics package comes out your bike is going to feel old. Single colour paint schemes age better than the flashy shit.

Rule #3 – What’s with the clear over decals? Peel that shit off, throw some new ones on and you have a new bike.

Rule #4 – If I didn’t live in the Pacific Northwest I wouldn’t run lock-on grips.

Rule #6 – Tires are probably the most expensive, fastest wearing item on your bike. I like a long lasting tire, is what I’m saying. Traction is nice too, though.

Rule #7 – I do like the feel of a nice tubeless set-up, but I don’t trust it and I am not a fan of checking my air pressure before every ride. So I really have no idea what to think about this topic.

Rule #8 – Velox rim tape is probably the best though, if you’re not going tubeless. Gorilla tape in a pinch.

Rule #10 – Building a wheel isn’t actually all that hard, but finding a good wheel builder is, for some reason. If you’re at all mechanically inclined, think about doing it yourself. It’s all about taking your time and attention to detail. Just go read Sheldon Brown on what to do.

Rule #11 – I don’t think I’ve ever used anything other than a brass nipple. Although, I own some pre-built wheels that probably contradict this statement.

Rule #12 – If all else is equal and you can’t make up your mind, choose the Shimano one.

Rule #13 – It’s taken a while, but companies have finally figured out the right bend for a handlebar. The motorcycle companies were the first to figure it out though. I still give them points for that.

Rule #15 – DT Swiss makes a 10mm through axle hub that will fit in just about any “obsolete” frame. If you try to tell me that this isn’t stiff enough for you, I don’t agree with what you are saying. And there might be something wrong with your bike. I’m ignoring the existence of your wet noodle full suspension bike right now, though. That thing is probably done. So, ya, I’m basically talking about hardtails here.

Rule #16 – There are a couple of companies out there that make really nice hubs that are worth the money. And there are many others that aren’t. If you’re not sure, see Rule #12.

Rule #17 – On a single crown fork I can’t feel the difference between a 15mm axle and a 20mm axle. But I resent that I have to think about it, and I realize that I talk about this a lot. And if you’re worried about how stiff your fork is, it’s probably not the right one for the bike.

Rule #18 – Low speed compression, high speed compression and rebound is all you need. I’ll give you a couple more if you’re winning World Cup DH races and have a factory mechanic tuning your suspension. Everything else is a gimmick. Well… coil spring u-turn was pretty awesome. I’m sad that is gone.

Rule #20 – You shouldn’t be all that concerned about what type of finish is on your stanchions.

Rule #21 – Internally geared hubs are not the future.

Rule #23 – I used to be able to tell you that a Thomson seatpost was a near perfect item. Now we’ve gone and decided that seatposts need to be more complicated.

Rule #25 – I don’t know what to think about pressfit bottom bracket. I mean… Why would I want my bottom bracket to thread in and my headset to press in? But why is somebody trying to “fix” this thing that works pretty darn well?

Rule #26 – But I have made my mind up on integrated headsets. Chris King says they’re bad and I believe them. Him. I think of him more like an idea…like Uncle Sam…rather than an actual person.

Rule #27 – Spending a bit of money to get reach and contact adjustment for your disc brakes is probably worth it.

Rule #28 – Spending a lot of money to get a really fancy rear derailleur is probably not worth it. Any longer. I bet there are some really crushed product managers out there because of this. I mean…that was like the bread and butter upgrade to justify your existence for 20 years.

Rule #29 – Nobody should argue about how many chainrings are needed up front. It’s like arguing about what type of underwear is best. That shit should be left up to the individual.

Rule #30 – Although…the new 11 speed stuff is pretty fantastic. I’m not sure why anybody wouldn’t want that on their bike. You know…other than having to pay for it.

Rule #31 – Every build costs way more than your budget. You’ve always forgotten something and you will always need to take an extra couple of trips to the bike shop. Headset spacers. A missing bolt. It will kill the budget of your project after you shopped for 6 months to save 10 bucks on a derailleur.

Inspired by Rule #29:
Nobody should argue about the wheelsize, that should be left by the individual.

Additional to Rule #21:
Not the future, but great in a nearly maintainance-free hardtail

I.m so glad he said nothing about larger wheels. Otherwise I would have to have called BS

I think you only need 2 rules - don't listen to anyone else's crap and ride whatever makes you happy.
I do like the 31 rules, although no. 21 makes me sad 🙁

43 Always see the Pixies 10 years ago before Frank was fat.

? - Frame material isn't as important as some make it out to be. Just

remember that you are riding a bike off road with obstacles - scratches and dents are going to happen. Aluminum is disposable and light, steel is strong and only comes rigid, carbon is light and flexes, and titanium is comfy and doesn't corrode.
*Change to rule #7 - If you aren't checking your tire pressure before every ride, you should get comfortable fixing pinch-flats or dealing with lots of tire sealant.

What's this flexy carbon you speak of?

I think he means shock absorbing?

I mean that carbon is compliant. There is a flexy carbon suspension fork. I can't remember it but the Angry Single Speed guy got to test one out.

Change rule #1 to "Your bike, components, tires, etc. most likely are not the reason you are not winning races!"

12…except if you prefer SRAM. Otherwise ride a single speed and use parts

from neither company just because.

whatever…Retail is for schmucks and Christmas shoppers. There are endless

used deals on parts that are awesome. Don't undercut your LBS at every turn, but be a smart shopper.

whatever 3.0…DO NOT LITTER, and if you see trash on the trail, stop for two

seconds and pick it up.

32 pounds is not a heavy bike for getting 160mm of travel. no matter what the pundits say. and the weight isn't all that important to your riding experience anyways… again- unless you're racing.

Rule #37 - Flats or clips, it simply doesn't matter unless you are racing at a world cup level.

Rule #32 - A "quiver killer" bike is missing the point. A quiver is good

Rule #33 - If you subscribe to #32, then you'll always be tortured over which bike to ride / take with you on a riding trip (and will always question your decision once you've made it)

Rule #34 - Don't get sucked into "this xyz is faster" marketing bollocks; unless you race, it doesn't matter. Pick a bike that's fun.

Rule #36 - Everyone should own a second bike at least and preferably a hardtail. A back-up bike is essential.

Good additions, gravityfreak. Who else has some?

Gonna disagree with this one. Water in your bladder, gatorade/electrolyte stuff in your bottle. I'm guessing colinworobetz hasn't cramped (or on a ride with someone who has) on a long hot ride due to a lack of electrolytes.

apple juice does the trick …no gatorade/eletrolyte stuff needed 😉