The Truth About 11-Speed

I’ve long been in the habit of doing mathematical equations in my head while riding; this came about involuntarily but quickly became a way to pass the time doing long road miles. While mountain biking primarily keeps my brain occupied with technical trail features rather than algebra, I can’t help but fall back into old habits.

The single ring revolution is a common subject while I’m turning the pedals lately. The majority of mountain bikers – or, rather, the product managers who spec the bikes the majority of riders buy – are in the process of accepting single ring drivetrains, but this new reality doesn’t come without its misconceptions. 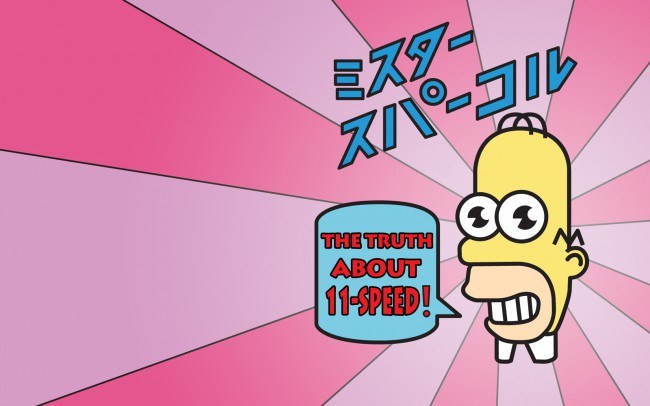 Mr. Sparkle holds the key to this problem.

I have two points to make about single ring drivetrains and they relate to common complaints that I hear in conversation. My first point relates to the jumps between gears, while the second speaks to the overall gear range of a system. Unsurprisingly, both points are related to numbers and the answers are actually quite simple.

Traditionally, bicycle cogsets have aimed for an approximately 12-13% jump between gears. With appropriately chosen gears, you feel a similar change in perceived difficulty when you drop a cog anywhere on the cassette. Wide range mountain bike cassettes make the 13% ideal a bit more challenging to attain, and numbers as high as 17% and can be found between the largest cogs – but for the most part you’ll find averages around that traditional ideal. (This is part of the reason we benefit from more gears on our cogsets.)

“The jumps between gears on an 11-speed cogset are bigger.”

I’ve heard this stated more than once while out on the trails – particularly by riders using an 11-speed system for the first time. Is a rider really able to discern a difference in the spacing between gears?

In thinking about the second cog on a 42 tooth cogset, which is a 36, I had a bit of a eureka moment. That cog is the same size as the largest cog on a 10-speed cogset. And it’s got one more gear. The 10-speed cassette starts at 11 teeth and the 11-speed starts at 10 teeth. They’ve got to be damn close. Here’s the proof:

There’s your answer, fishbulb. SRAM’s numbers are exactly the same apart from the bottom cog, which rarely sees use under most riders. The notable difference between the manufacturers is an extra 3 tooth jump mid-cogset on the SRAM cassette. That itself is potentially discernible, but at 16.7% it’s not a bigger jump than other gears on the cogset. The bottom line is the jumps between gears on an 11-speed cogset are very close to those of the 10-speed one. 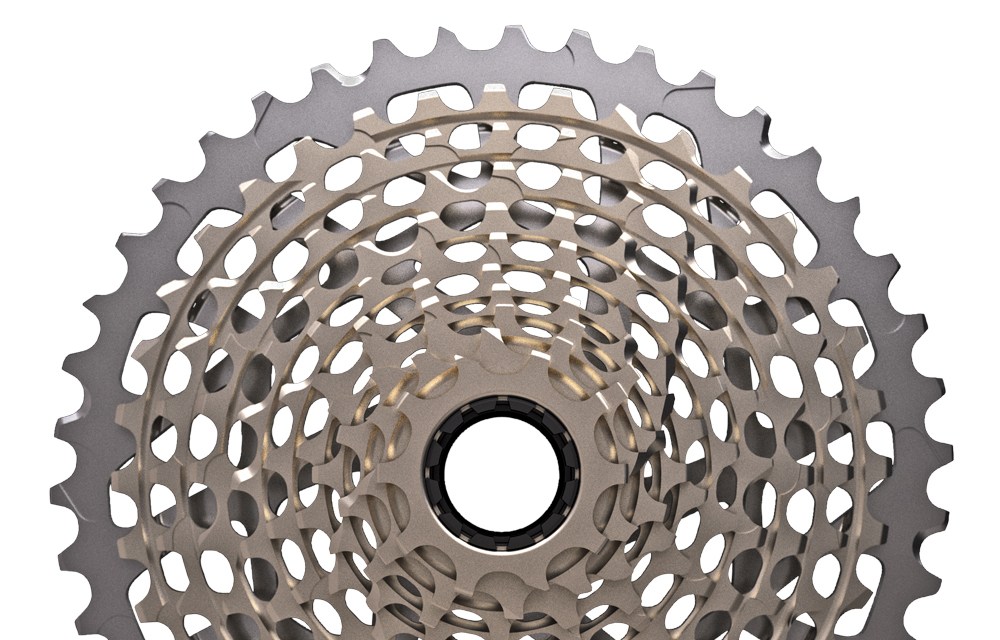 The average mountain biker uses a fairly wide range of gears, but mostly on the low end of the spectrum. If we can agree (and I think this is quite reasonable) that a 24/36 double chainring setup with an 11-36 10-speed cogset provides adequate gear range for the average rider, we have the basis for an educated discussion of overall gear range.

The 10-speed double setup with its 491% gear range has the 11-speed single beat by 71%. This is the reason it’s still important to choose the right front ring with the single ring system: you can achieve the same top gear or the same bottom gear – but you can’t have both. Most riders choose based on what they think they’ll need for a bailout climbing gear.

I’ve often wondered at what point rear gears will cease to become any larger. Will the dinner plates on our rear wheels be limited by overall size, the derailleur’s capability to control a long chain, or perhaps by sheer weight? I got to thinking about the simplest logical step beyond current 11-speed systems. 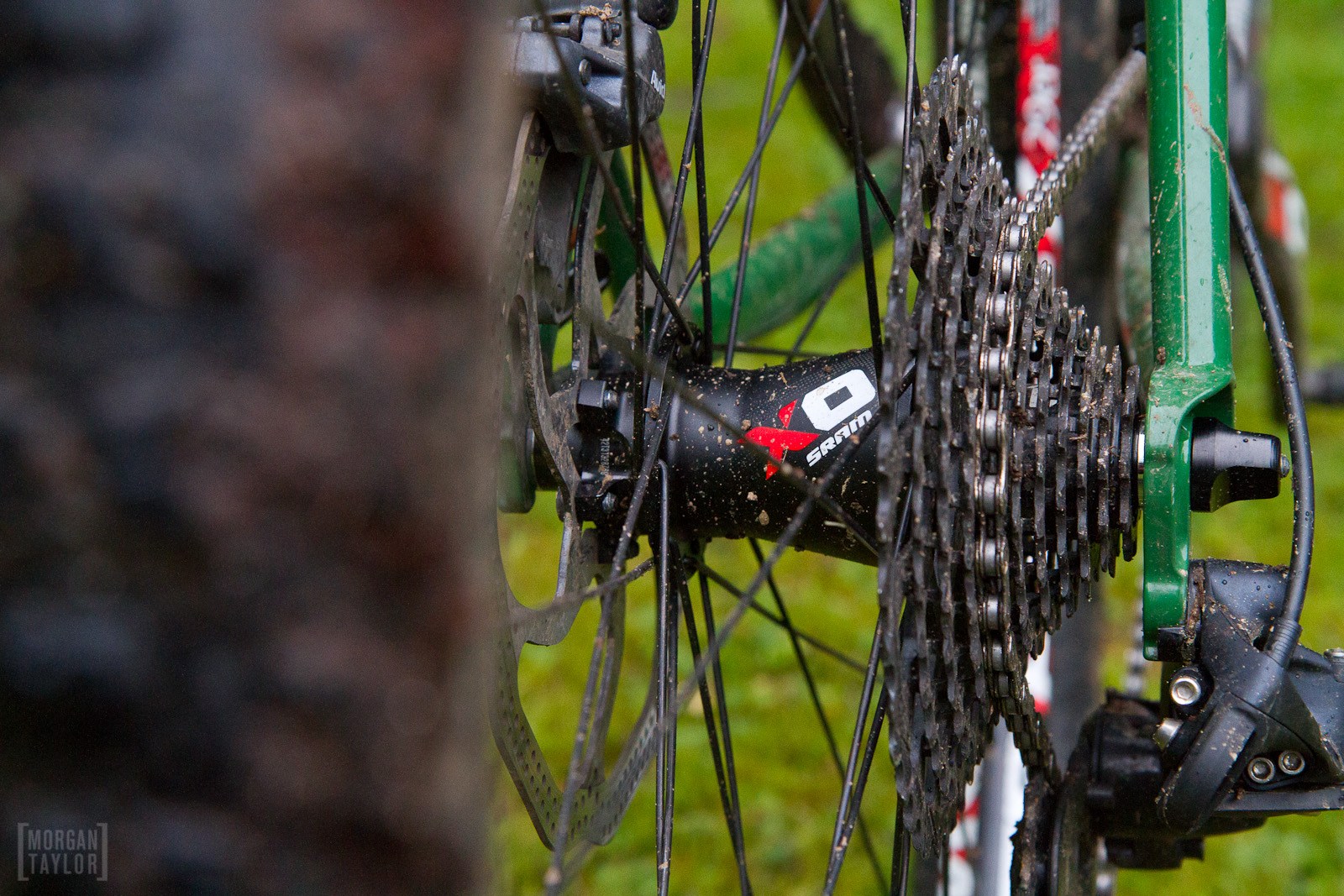 With just one more gear, a 49 tooth cog, the single ring system will no longer be at a gearing range disadvantage. Is 12-speed the answer? The end of the gear wars? The percentage jump from a 42 to a 49 is the same as that from 36 to 42: 16.7%. Plausible. Obviously innovation will continue but it seems as though the front derailleur could truly be pronounced dead with just one more cog out back.

Top level racing pushes development in bicycle technology. Elite racers are the measurable determinant of what companies need to provide. At the current moment, the 420% range provided by SRAM’s 11-speed system has been on plenty of winning bikes in both XC and Enduro. However, these racers are still carefully choosing a chainring depending on the course. It would certainly be simpler if we just had a bit more gear range…

Want to nerd out on gearing? Start with the late, great Sheldon Brown’s calculator.

Simplified CVT, transformed to work on a bike

I tried 1×10 I gave it a good full year riding through all the seasons. I live in southern oregon here a typical ride will climb 8% average grades for up to 5 miles. With the 1×10 I would always end up hiking the bike and choosing my battles. Switched to 2×10 and couldn't be happier. I do understand the logic of 1×11 and being selective about front chain rings to match the course. But for an average joe like me 2×10 offers the best balance of range and cost. I do however like the 1×12 option, so maybe one day i will be riding a 1×12. until that day i'll enjoy my 2×10 am rig and my 3×10 xc.

Hi Morgan, Great analysis; one thing that has always made me wonder is the perceived efficiency sensation of riding bigger chainring combo over a smaller chainring combo when the same gear ratio is selected; for instance, in the current double ring setup, there is almost always gear cross over where ratios are similar. Coming from road riding/XC career, I always selected the 'big ring' over the 'small ring' when a similar ratio existed for high speed spinning; there has been lots of debate over whether this is psychological or mechanical. Here is an interesting article that puts some science behind the discussion. Bailout gears are of course not an issue, but on long fast flow trails where you are doing lots of moderate to high speed spinning, I wonder if the single speed is the way to go given the small front chainring, small cog combo that would be used. I could see for most Shore riding where the 1X11 is great, but for more XC/adventure riding elsewhere, I would think a 2X10 might be better. I also wonder about the longevity of the cassettes on 1×11 if a lot of spinning in the 11 through 14's is required.