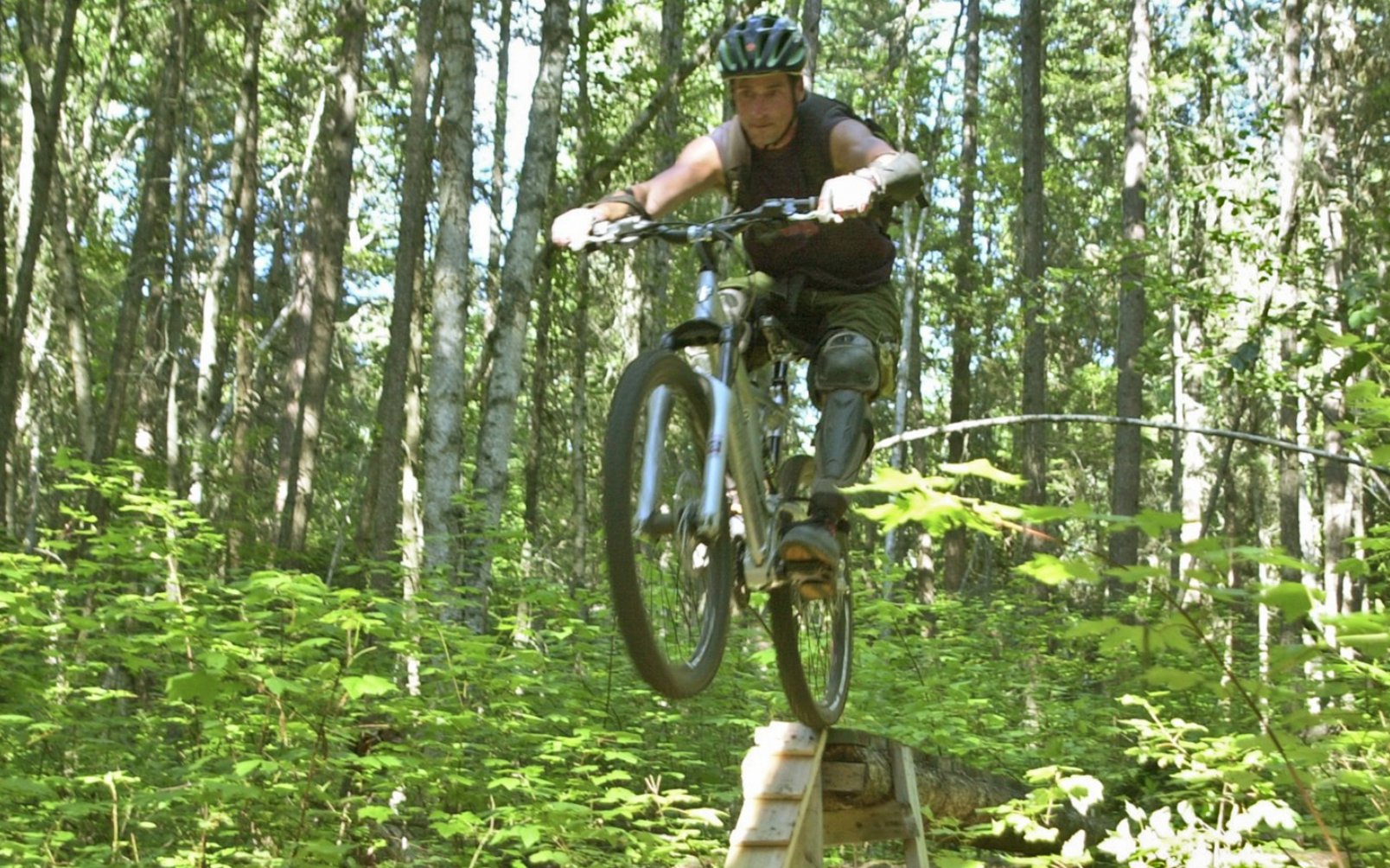 The Spanish Underpants. It was a trail name you could sink your teeth into. It put visions in my head and made me wonder. To me it sounded like somebody got some – but that was just a guess. I liked the juxtaposition of an exotic land and a childish garment, and the way it rolled off my tongue. When people heard the name the first time they’d laugh and follow with some version of WTF? It took me years to ask the trail builder, my old friend Keith Elliott, how the name came to be – and I was glad for the delay. 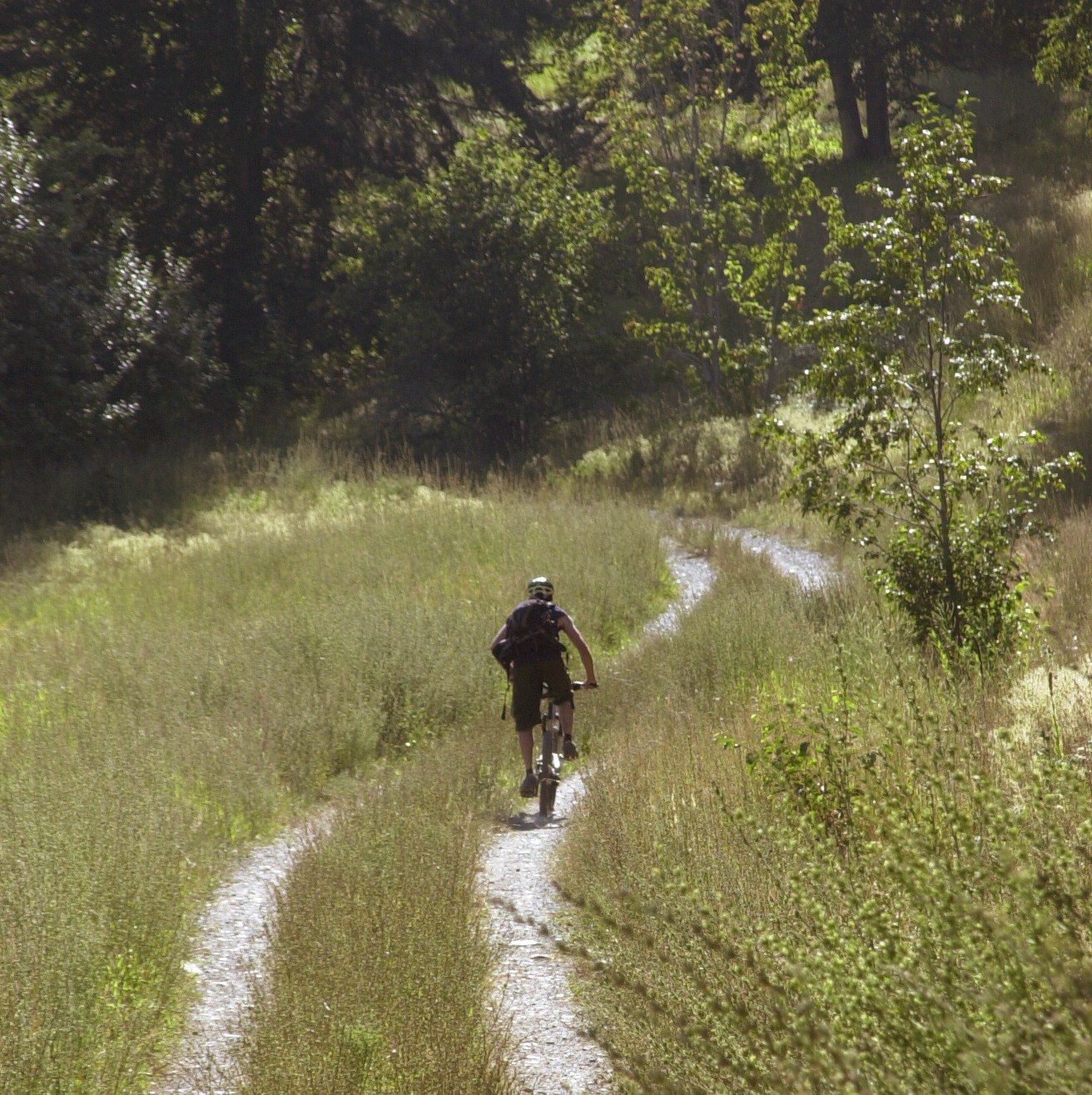 The last push to the trailhead could be smoking hot but stoke would be building in equal measure.

Summers in Scotch Creek on Shuswap Lake have been a family tradition since before I was born. Swimming, water skiing and eventually wake surfing with family and friends were sweet, but once I became a mountain biker I wanted more. From the late 80s I began a fruitless search for the kind of trails that put a smile on my face. At that point in my evolution trails had to be steep and techy with built challenges, like the trails here on the Shore, or I wasn’t interested. For my short attention span mountain biking was about banging up against the limit, about challenge and adrenaline. 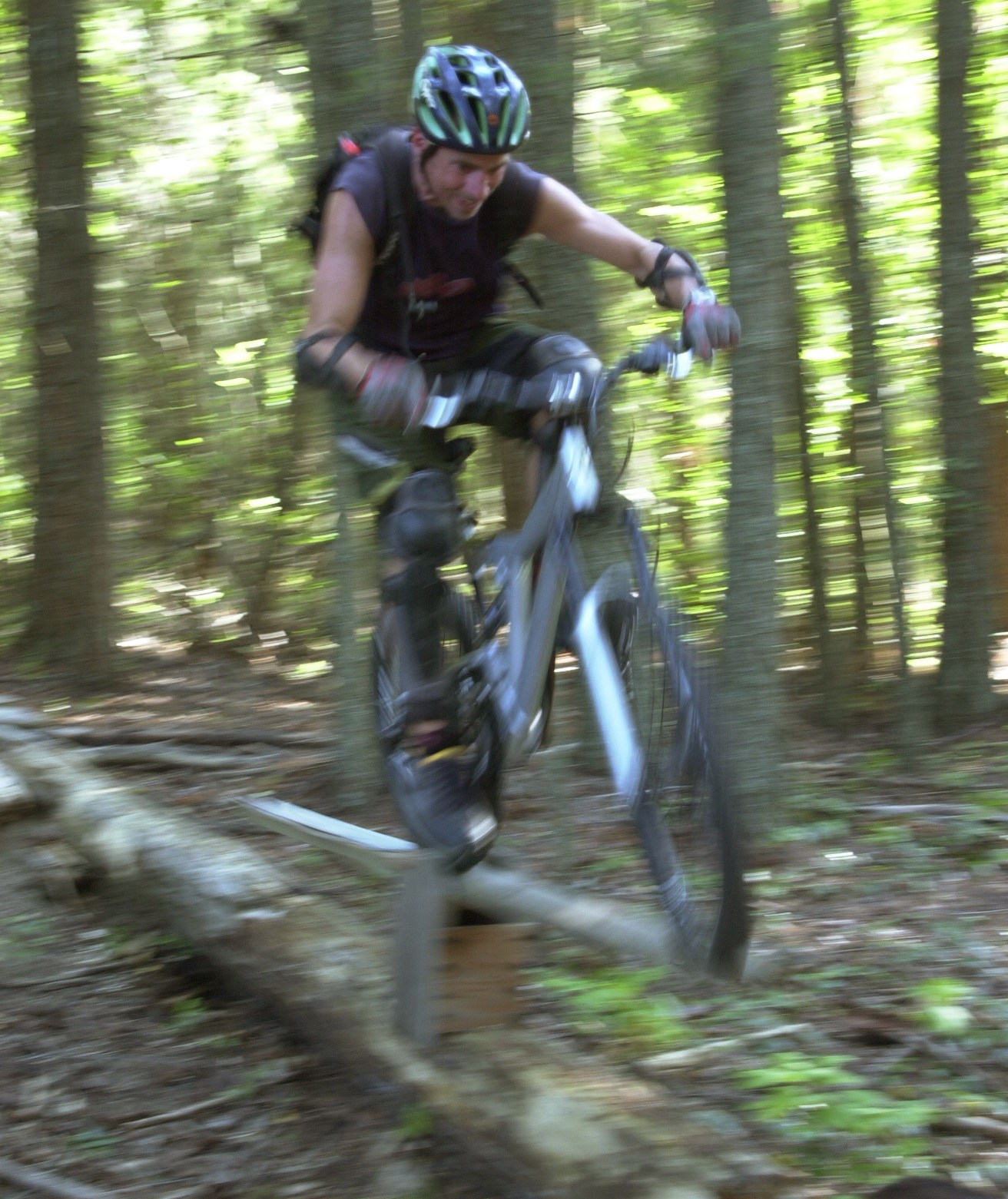 Game on. After a little ladder bridge this tricky double teeter got the trail going. All the riding shots were taken in 2004 – just after the trail had been refreshed.

1998. At the cabin for my stag. We’d built a ramp so we could wheelie drop the deck onto the sand. The two-by-ten was angled up steeply and the drop was 5 feet. A few of us were managing to survive it clumsily when we got our pedal strokes just right and we were very pleased with ourselves. And then Keith rolled up. He pedaled in without a word, noticed the ramp out of the corner of his eye and then without checking the landing or ratcheting his pedals he floated off the end, landing softly on his rear wheel. That was Keith on every ride – he’d leave you gobsmacked without ego or fanfare. He was always quietly awesome. The year before Keith had spent a winter of quiet awesomeness building The Spanish Underpants and my world in Scotch Creek was complete. 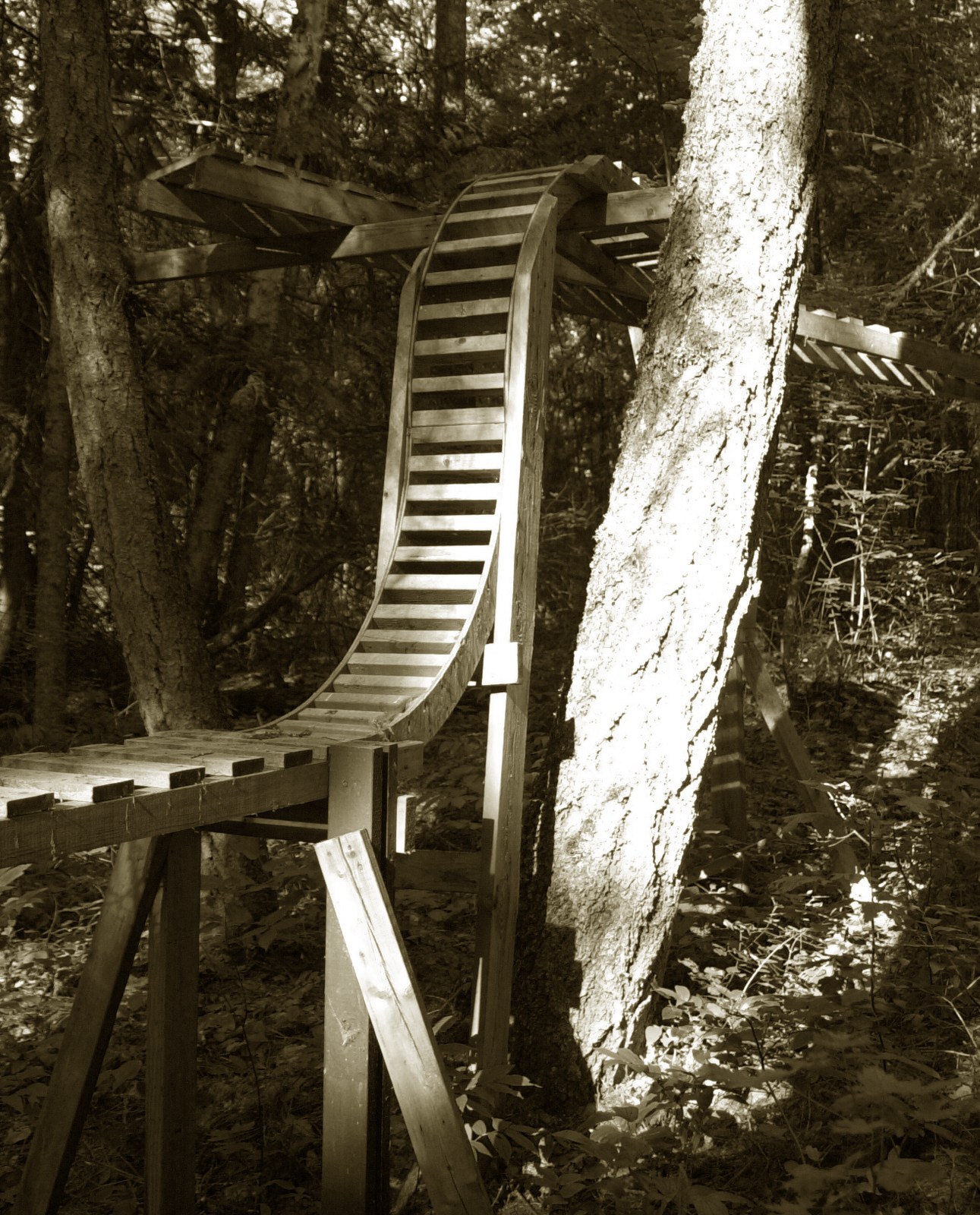 I can’t remember what this feature was called – probably because I never had the nerve to ride it.

The trail wasn’t long, but the climb from the lake – 40 minutes or so – was enough to get the heart beating and the down satisfied on many levels. After grunting up Alan Road and ignoring private property signs we’d close the gate behind us and pedal up a little-used double track and through a meadow before arriving at another gate. More signs to ignore greeted us and we’d pad up while swatting mosquitos. In the beginning Keith put his skills as a carpenter to work and, since this was the late 90s, he built some fun stunts – and some crazy ones. The first was a double teeter totter that was low to the ground and then, after a short section of single track, things got wacky. Keith built a two-by-four trough to ride up before you could choose your own adventure. Once you were nine feet off the deck you could select right, which was a drop to flat, or left which was a steep, skinny downcoaster to a four foot drop. Keith, a top level rider who rode with Wade Simmons and others in Pulp Traction, rode the 9-footer to flat on his first attempt. On an aging Trek Y frame. A young rider who was with him got pumped on adrenaline and followed him off and broke his arm. I never saw anyone but Keith ride either of these lines. 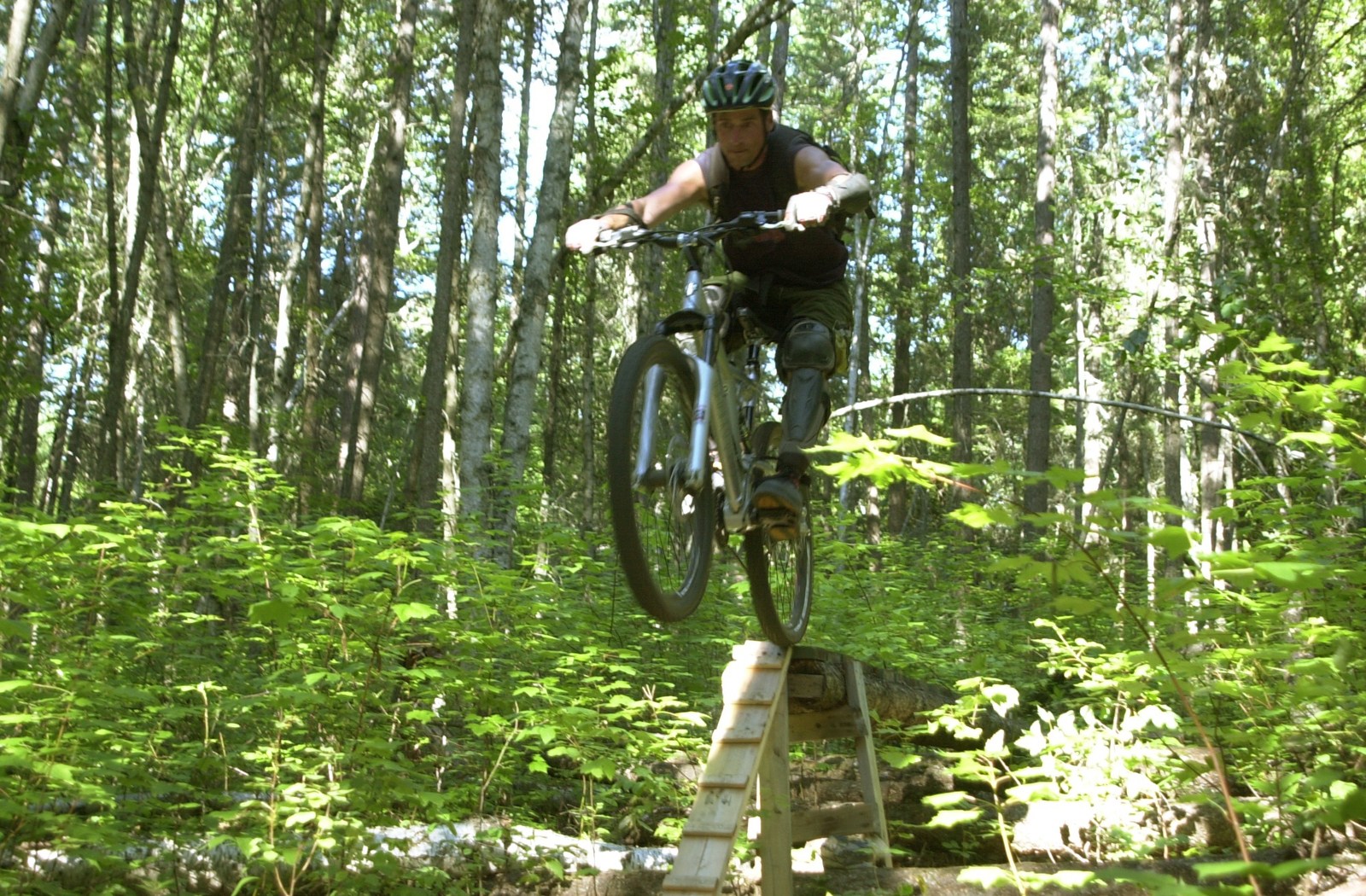 The good old days – when a skinny to four footer (using the nsmb ruler) was reason to session.

A couple of stunts followed but after that the steep terrain provided most of the challenge. Keith added optional lines and a a few more stunts but this section of trail held its own without much lumber. The second last stunt was a steep two-by-six trough ramp off a small cliff, a feature I only got the nerve to ride once. 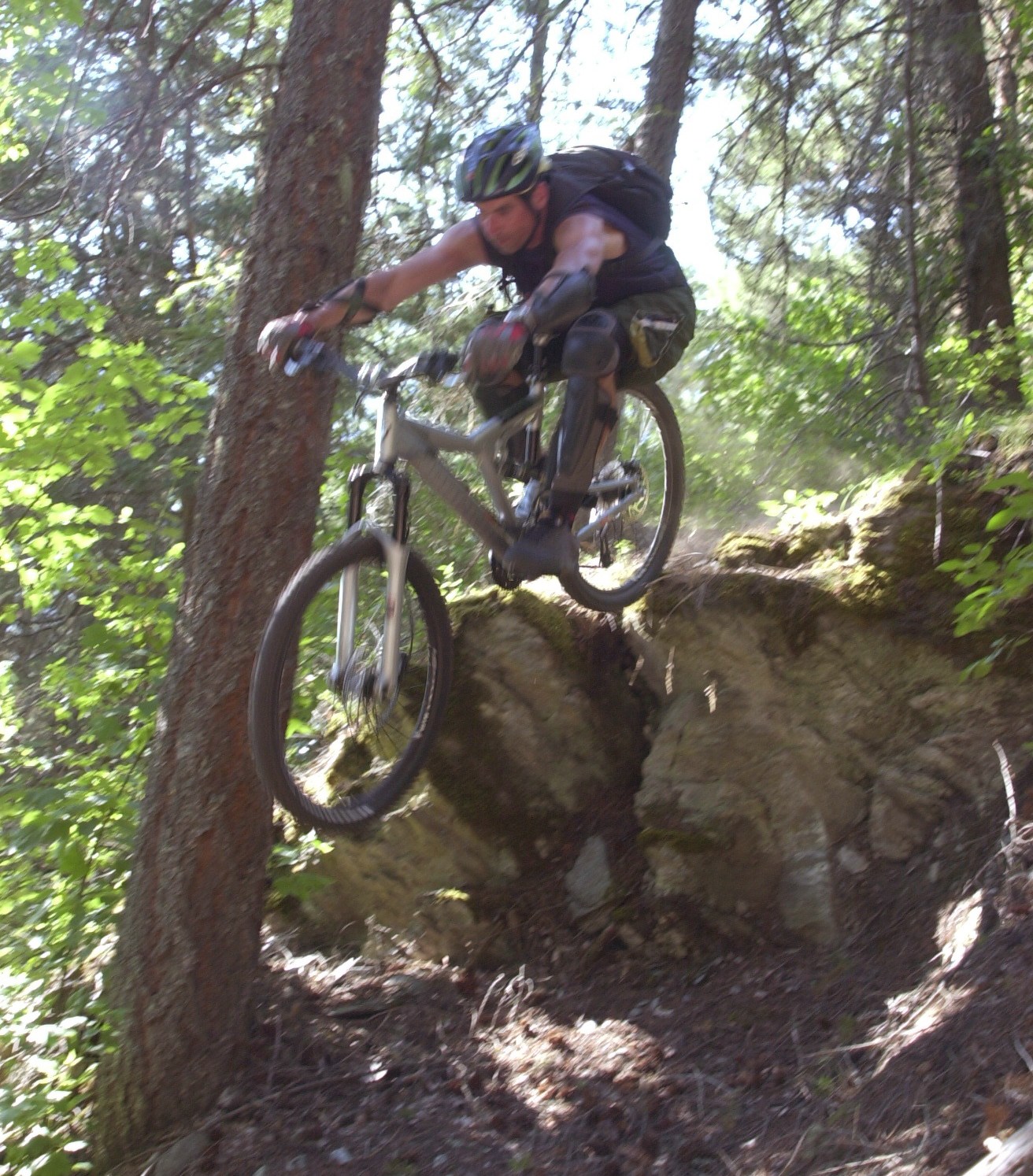 I swear this was a tricky move. An off-camber left hander ends just before the ledge and it made me pucker every time.

Over the years the forest began to reclaim the wooden features. Long wearing Cedar is scarce in the B.C. interior and many of the stunts were made of dimensional lumber. In the day the stunts were perfect but riding styles were changing and the single track under the wood started to take centre stage. Luckily the terrain was varied and fun and the line improved with each passing year as the forest decommissioned features. 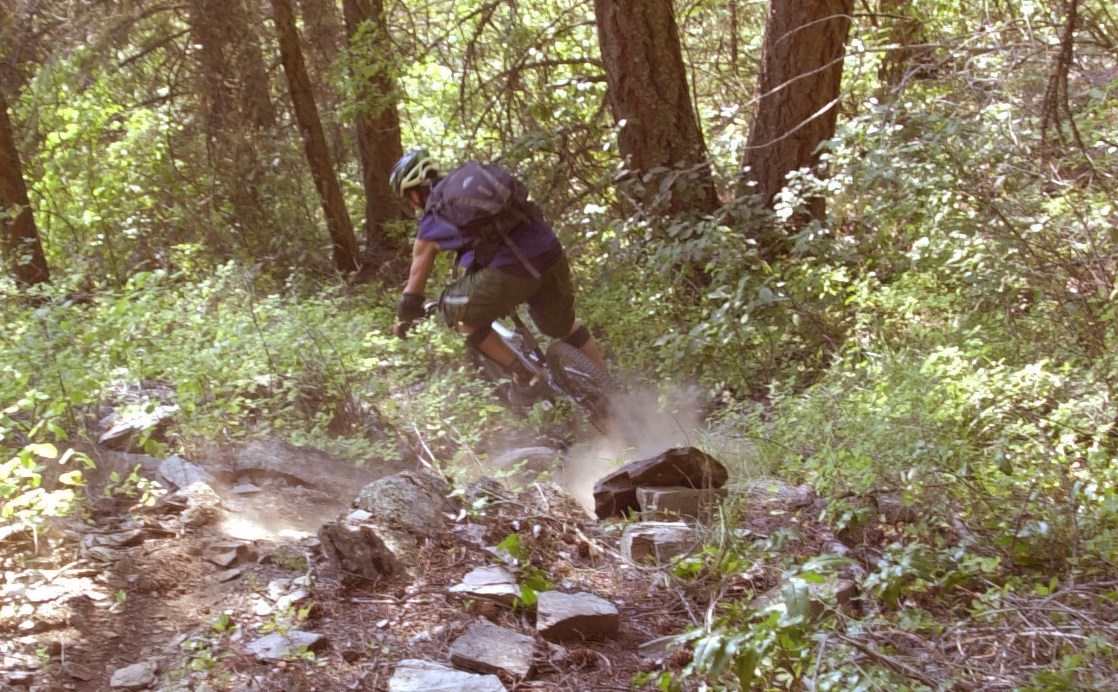 Steep, shaley, rowdy, fun – and it seemed like nobody rode it but me.

Keith moved away and eventually I started to take some responsibility for clearing the trail in the beginning of every summer. Occasionally someone had been there before me but there was almost always some deadfall to buck and remove and leaves and sticks to rake. As the trail morphed and matured I began to appreciate it more and more. It became my own private trail and I looked forward to seeing what the winter had wrought when I returned in the spring. 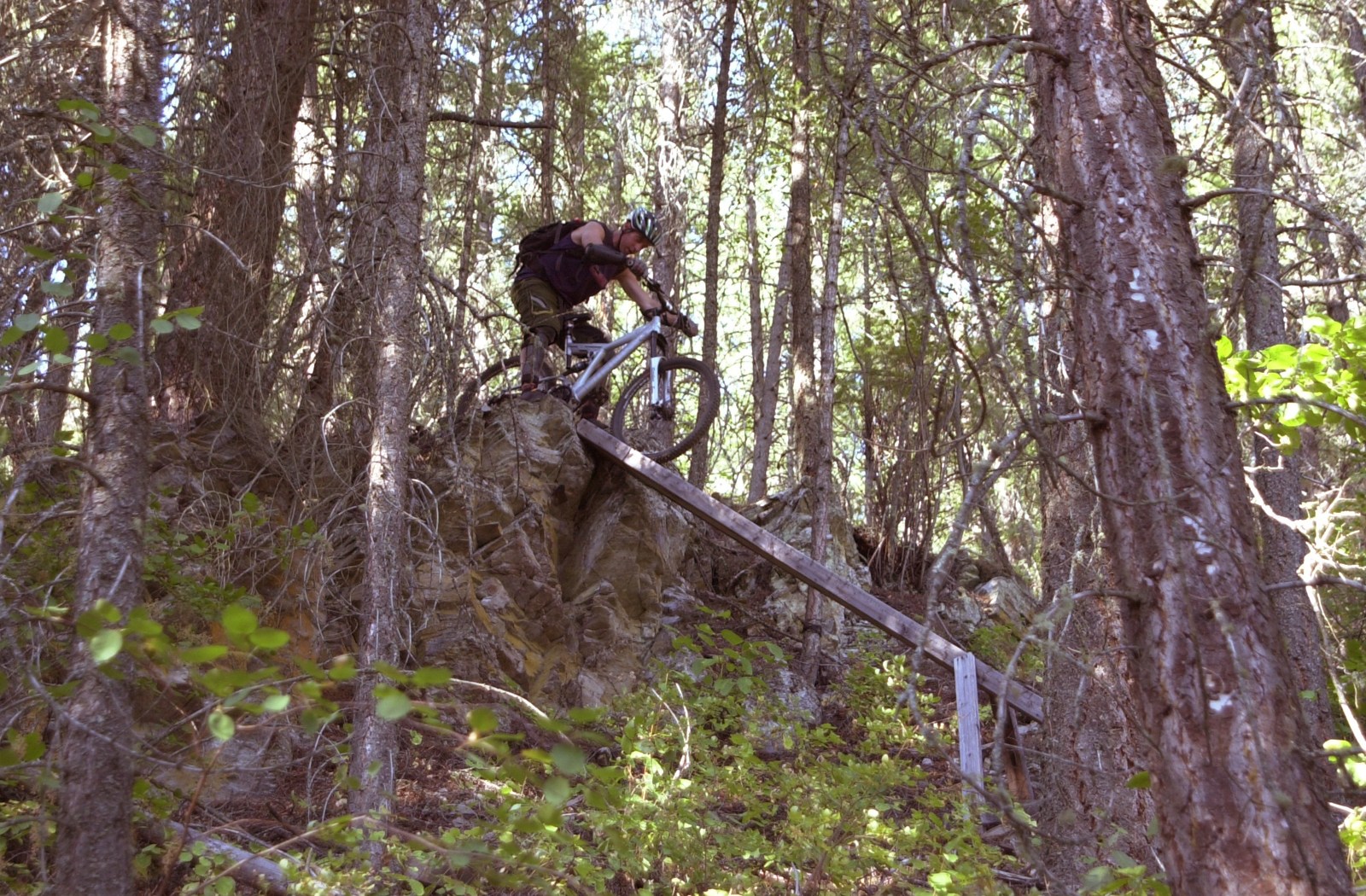 I know this doesn’t look like much but until your front wheel was in the trough this was blind – so you’d be teetering 10 feet off the deck before taking the plunge. I only got the nerve up once.

One summer I arrived and some clearing had been done. Access for a skidder allowed some trees to be taken out. The view was improved but really there was no harm done. I looked up the hill with trepidation for the next few years but when nothing happened I forgot all about the threat, thinking my private summer trail would be there forever. 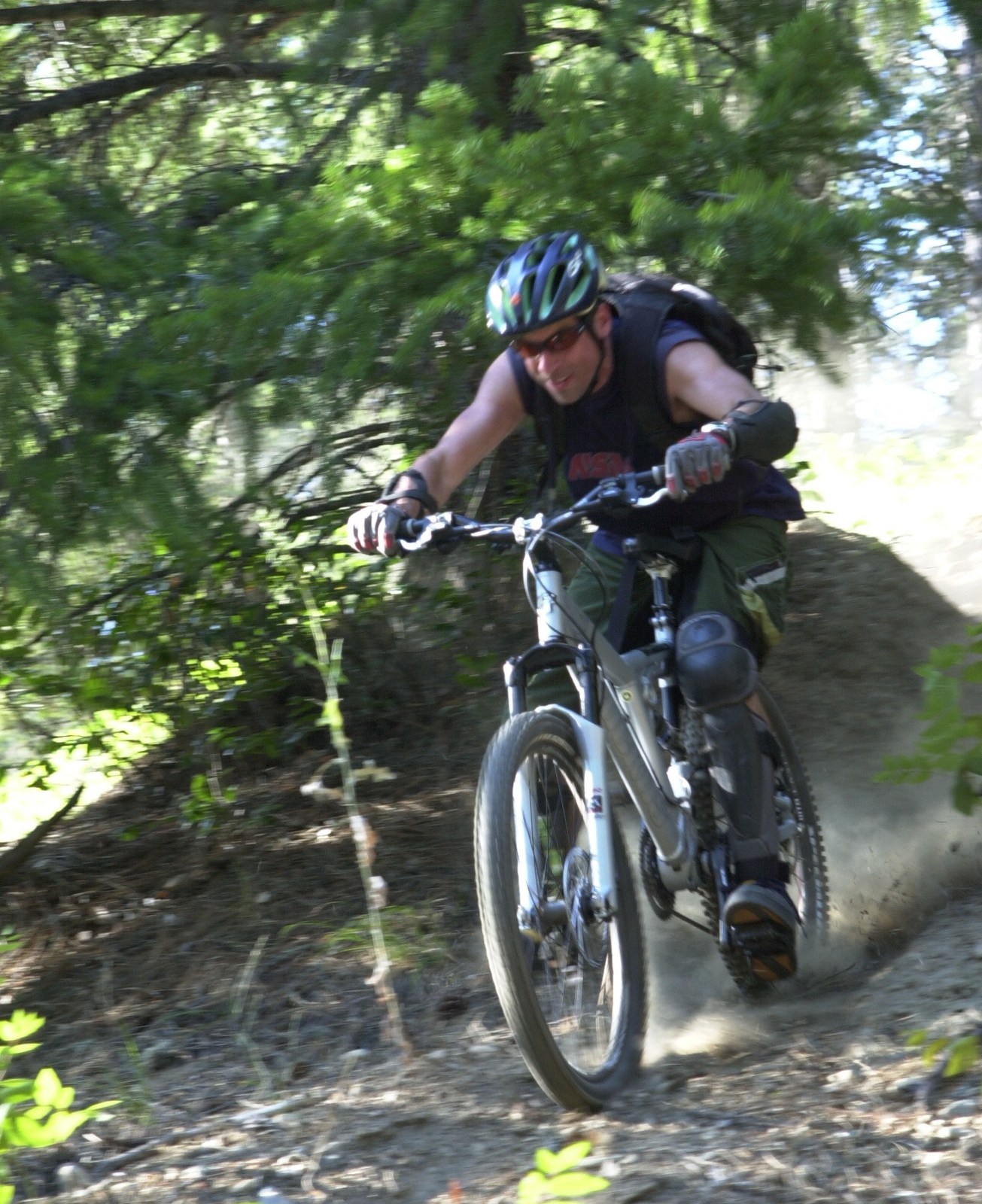 This last descent was the cherry on top.

Overall it wasn’t North Shore gnarly but the steep sections were too much for inexperienced riders. This lead me to start hiking the trail if there were no game riders around. I began to look closer and breathe the land in. We’d notice ancient middens left by the first people to inhabit the land, a rare Western Skink, bear scat and other wildlife sign I never would have seen on the bike. Hiking The Spanish Underpants and maintaining it made me enjoy riding it even more and, like the Grinch’s heart, my affection for the trail grew two sizes. As I morphed and matured(!) as a rider the trail seemed to be one step ahead. 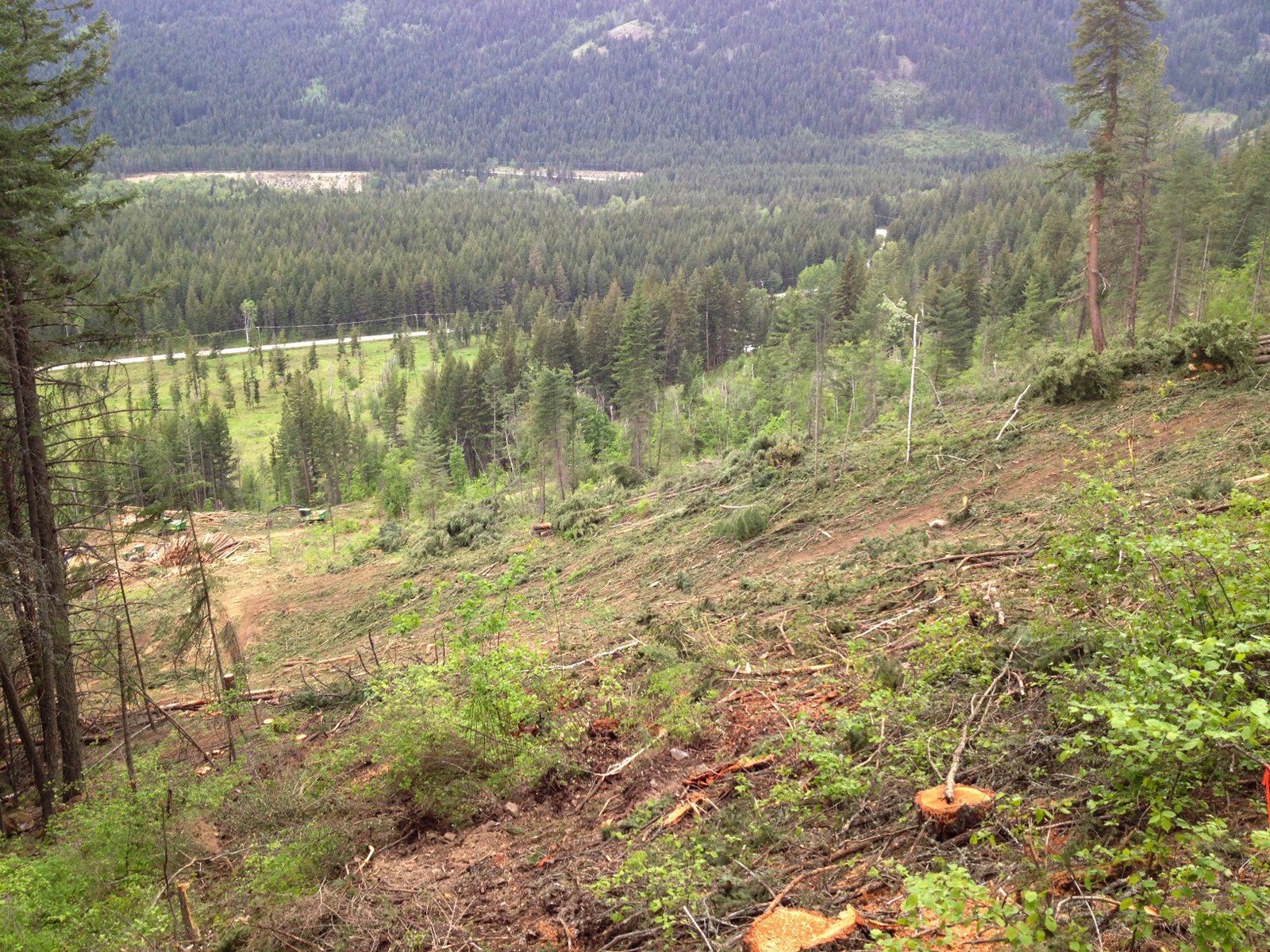 The first phase of the harvest didn’t look too bad – but they were just warming up. Photo – Cam McRae

The climb could be brutal in mid-summer but the ribbon of single track and the adrenaline it brought made my sweat run cool. The descent went from loamy to steep hard pack to shale and then through the cycle again before you found yourself back on the site of the old Lazy R ranch. The challenge and the diversity made its brevity forgivable. Finishing the descent elated, hungry for more and vibrating, I’d mash the pedals back to the lake, stoking the sweat and then I’d ride straight to the dock to dive in; helmet, shoes and all. 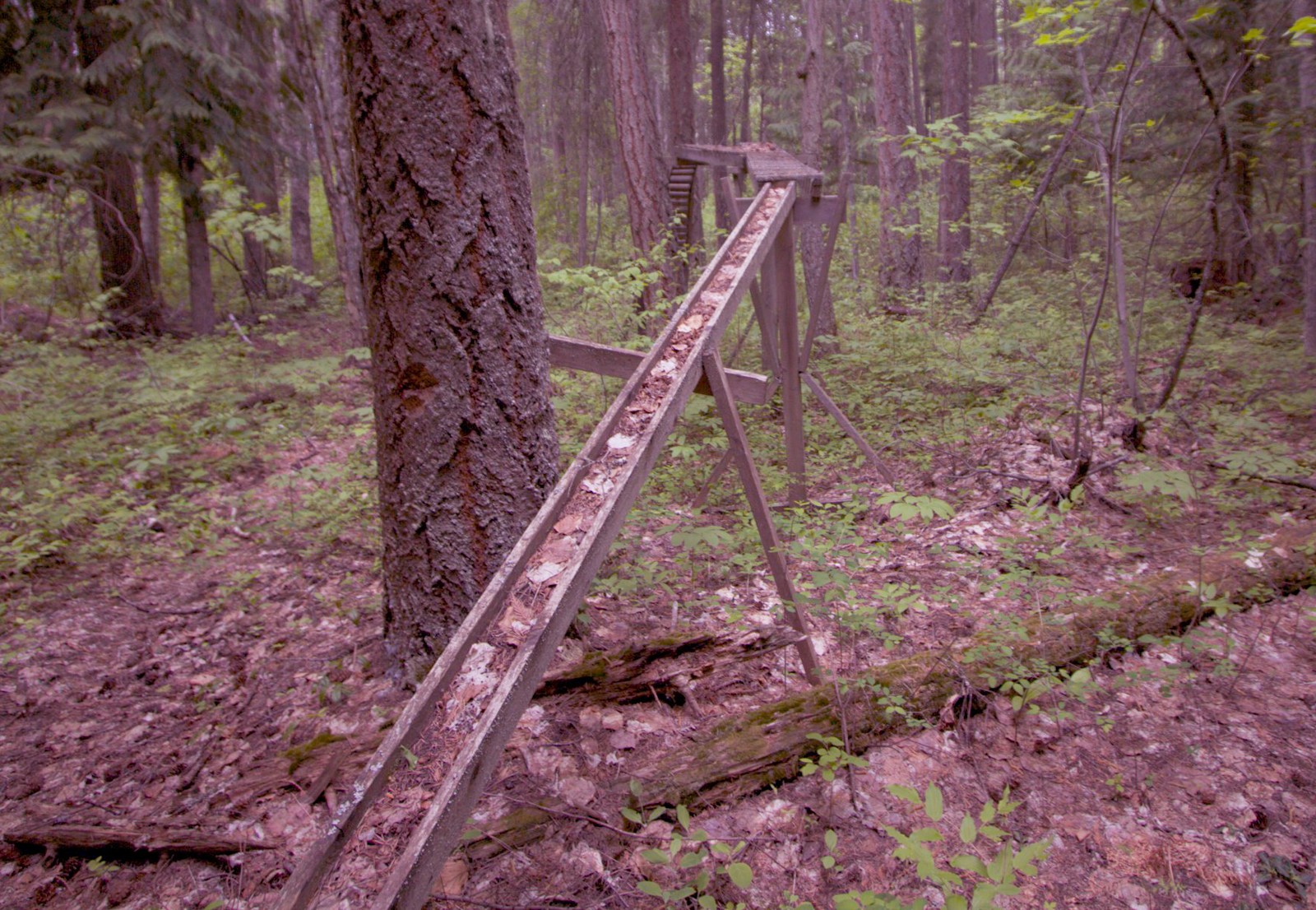 This was my last look at this part of the forest before it was cut to make flyers and toilet paper. Yep – I’m bitter. Photo – Cam McRae

In early spring 2012 I was bikeless in Scotch Creek and I dragged some old friends up the trail for a hike. Nothing much had changed over the winter and there was less work to do than usual. In late June we returned in the early evening and as we drove by it was clear something had changed. The next day we went for a closer look and I was gutted; the last third of the trail, most of the steep section, had been logged. They had used harvesting machines for the job and the cleared area was an almost impassable mess of ruts and timber waste. Part of the steep section was intact and it appeared a re-route was possible but as we climbed further we noticed the top section was elaborately ribboned. Hoping for the best but fearing the worst I returned to the coast and rang a buddy in the Forest Service. He gave me some names and my search began. The trail was on private land so I knew there was little I could do but at the same time I couldn’t do nothing. I eventually tracked down the company doing the logging but they wouldn’t tell me anything. All I could do was wait. 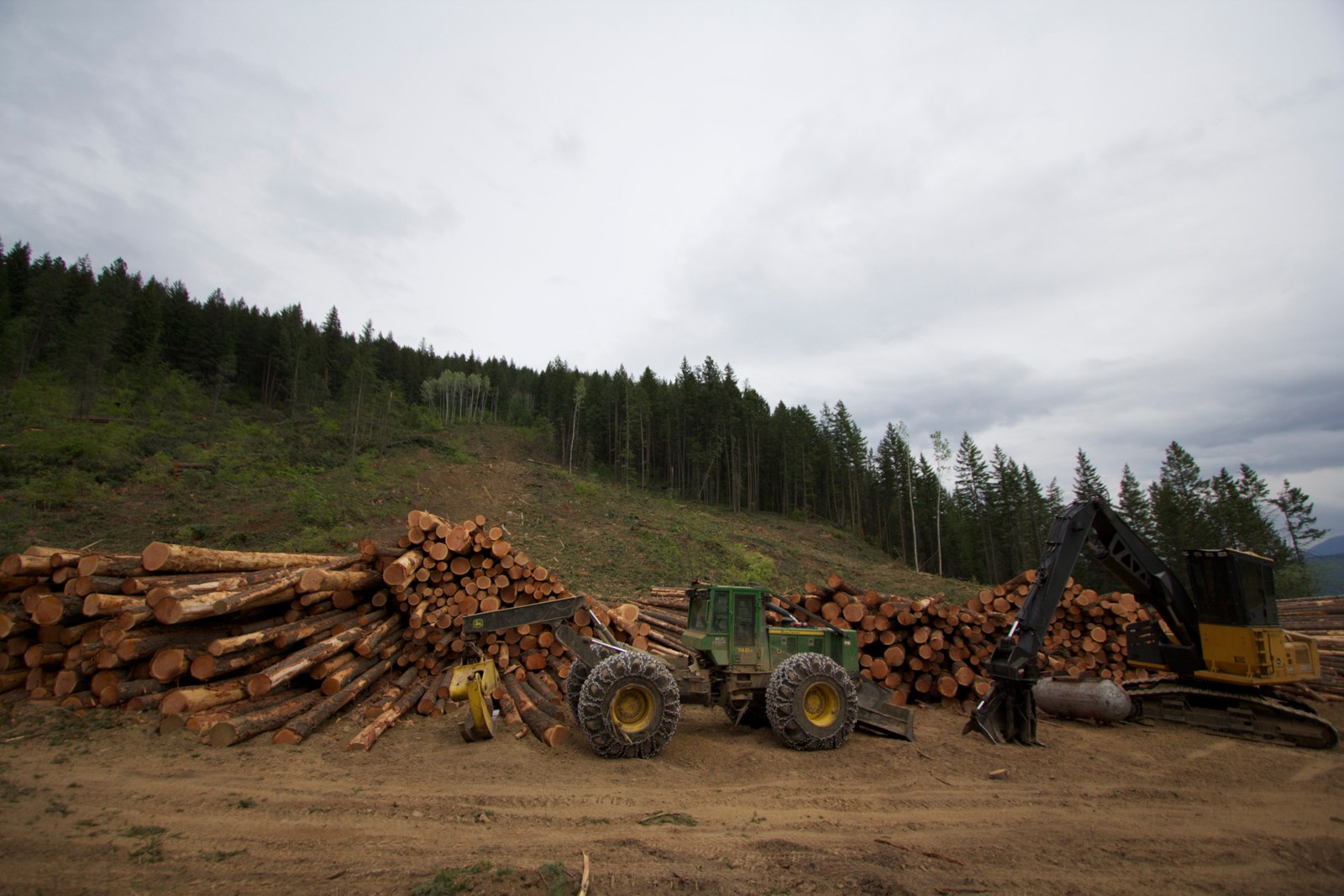 The hill is far enough from the road that it wasn’t easy to see what the next phase had wrought but two weeks later a hike to the top confirmed my fears. A mere 50 feet of the Spanish Underpants had survived. My private trail was gone along with the magical forest it once snaked through. 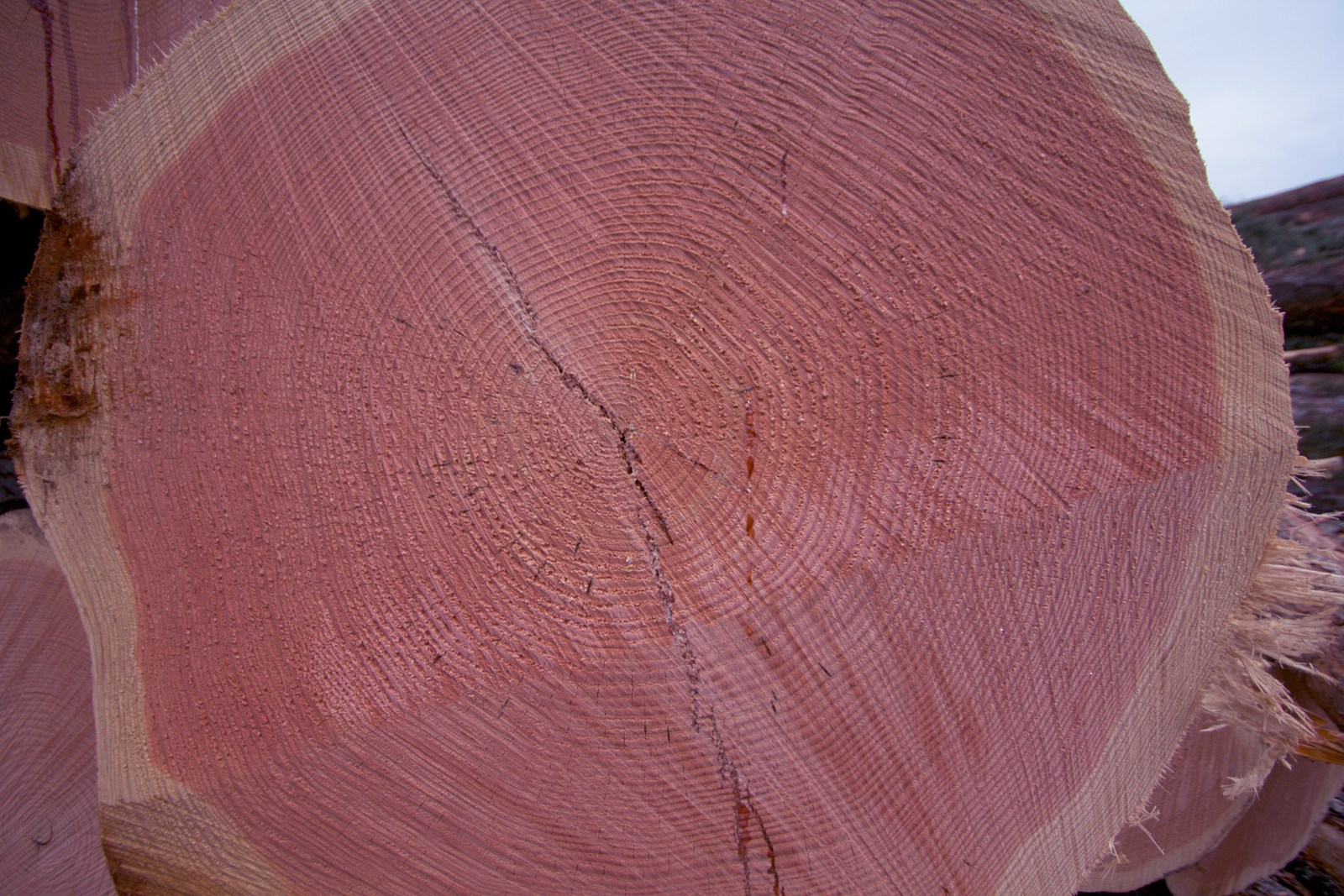 By my count the last clear cut was about a century ago. Photo – Cam McRae

I’d been trespassing for years so I had no right to the anger and frustration I felt. Common sense did little to dull the ache but at least the experience schooled me some. These days when I’m in the woods, either on the bike or holding a shovel, I pay more attention. Acutely aware that every trail could be erased, I breathe deeply, savour the details and give thanks to builders like Keith.

I eventually remembered to ask Keith where the name came from. Among other scenarios, I envisioned a sloppy wine-fueled hostel session with a raven-haired Spanish beauty. Keith turned to me and said, with a little smirk, “I just liked the way it sounded.” Like the trail, the name was born in Keith’s imagination. It needed no justification to be, no elaborate explanation; like the builder and the trail, the name held its own.

That was a good read. Thanks

I have to agree, nice to see an article of you once again, Cam. I hope there are more in the pipe?

Thanks lads. It's nice to be back. in the saddle and back writing stories.

Pete - please google that and get back to us.

Good stuff Cam. In the sage words of Boyz II Men, its so haaaaard, to say goodbyyyyyyye… to yesterdaaaAAaaaAAaAAaaaaayyyyyyyy.

Nice one, Cam. I hoped the pics of Spanish Underpants being pulled down would be entirely different, though.

what a story. i've missed your writing cam. welcome back!

Let me know when you are up there. I have something else to show you. Bring a camera.

Heading up tomorrow. No bike though.

Will be up first week of August with bikes though.

I only ever rode this trail once. That roll over with the 90 degreers at top and bottom…that thing defies physics.