The Relics of Shaketown – Part II

Bryce Borlick is back with another old timey tour through the slopes of the North Shore when humans first sent projectiles down its fall lines. Catch up with The Relics of Shaketown Part I, and dig in to Part II below…

The cool crystalline waters of Lynn Canyon flow just beneath my rocky perch tempting me to while away my afternoon in this shady cove, but I’ve got miles to go before I can hang up my helmet. I hike back up to Lynn Valley Road, back into the safety and uniformity of the suburbs, and I can’t help but wonder whether today’s residents know about the rough and tumble beginnings of their community. 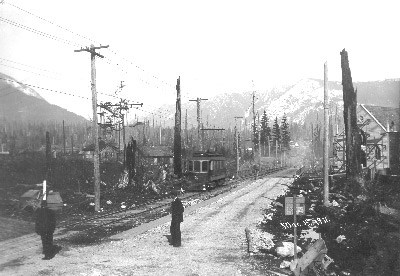 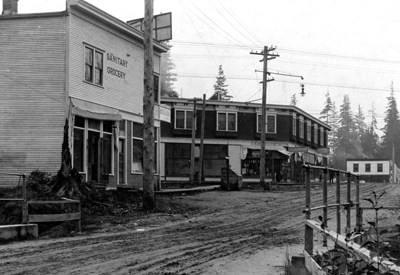 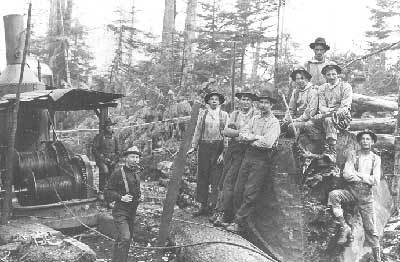 In the mid-1800’s Lynn Valley was known as Shaketown for the cedar roofing shakes it produced and, like most outposts on the North Shore, it wasn’t much more than a few buildings at a muddy crossroads. The outlying lands were shockingly barren from a combination of land clearing and forest fires that ravaged through every couple of years. Flumes and skid roads criss-crossed the area, bringing timber from the shake mills and logging camps to Moodyville down at water’s edge. It was in this era that J.W. Fromme served as a mill operator, town councillor, and a driving force in the development of Lynn Valley. 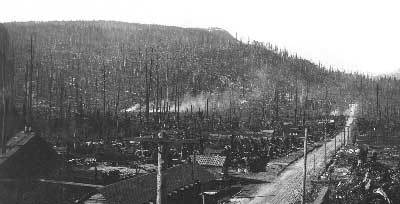 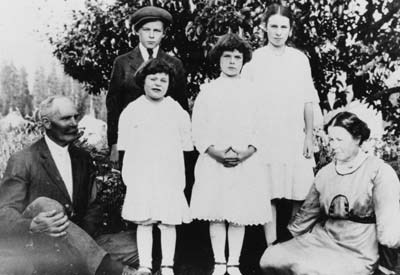 My next is goal is Mount Fromme, originally called Dome Mountain. It looms in front of me like a gentle giant as I pedal along McNair Avenue, past the sprawling suburban homes of Lynn Valley’s few remaining anti-biking advocates. I make a right turn onto a gravel trail and slide under the forest canopy of Mountain View Park. Immediately to my right is the old holding pond where cedar shingle bolts from the McNair mill waited for their flume ride down to Moodyville. Over the decades natural erosion has filled in much of this manmade pond and it’s now more of a muddy bog for kids to catch tadpoles in. 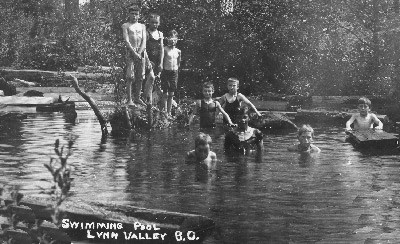 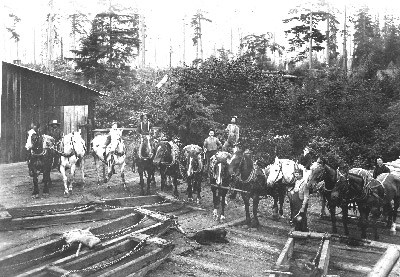 The crew from the Fromme mill. Note the sleds used for dragging logs down the mountain.

I downshift and turn the cranks harder as the trail turns upward and becomes more technical. I turn left and right and left again, negotiating my way up the technical bits and keeping an eye out for the best line. The trail has changed with time and, while I can remember a time when it was in better shape, I can also remember a time not too much earlier when it didn’t exist at all. 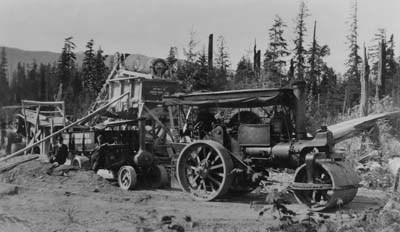 After some effort I emerge onto Mountain Highway, not far above the old quarry. This road, originally called Centre Road, was the main skid line from the forests to the town and, consequently, it was the lifeline for Lynn Valley. But by the early 20th century the mills had gone quiet and in 1925 the upper section of Mountain Highway was paved and renamed Grouse Mountain Scenic Highway, with the new purpose of delivering carloads of Vancouverites safely to the ski slopes far above. By the 1950s, it was replaced by a chairlift (at the top of chairlift road) and it has served primarily as a utility road since then. 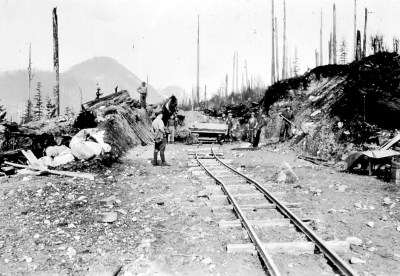 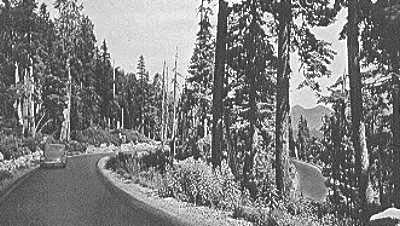 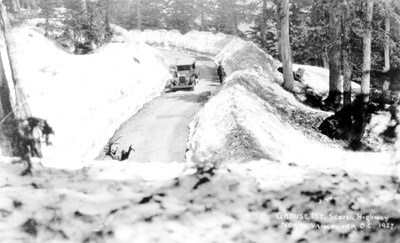 The chicane, roughly at the access point for Leppard trail. 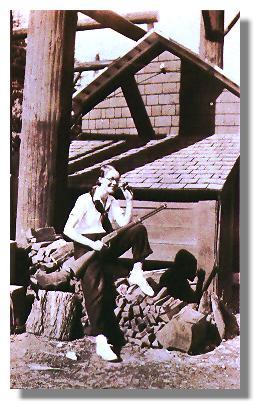 As I pedal up the easy grade of the road, noting a few remaining sections of the original pavement, I survey the woods around me. Although there isn’t much evidence of the old logging camps, you can often spot areas just to the side of the road that are distinctly flatter and clearer than the adjacent forest. One such spot is the Van Tan club at the second switchback, although I wouldn’t recommend venturing in there looking for old broken down sagging things. The logging camp that was situated here, at the top of a rocky bluff, sent logs down the hill in a dry flume, with the logs often alight from friction by the time they reached the bottom. As you can imagine, the life of a 19th century logger was fraught with all kinds of bizarre perils and death was a constant in the camps. 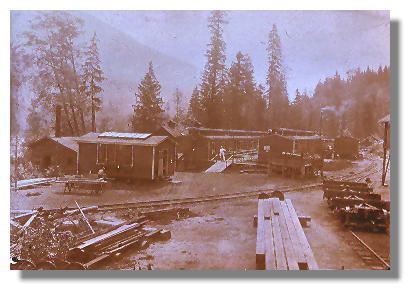 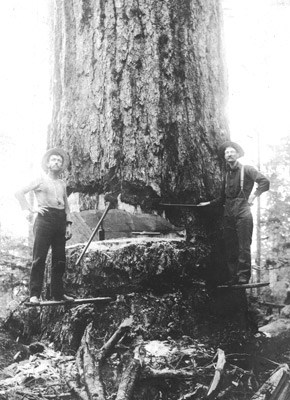 With timber this big, what could possibly go wrong?

Just before the 4th switchback I hook a right and give the Warden’s climb my best effort. It’s a tricky mess of babyheads and roots and today it gets the best of me, forcing me to dismount and walk up a bit. I notice that someone’s cut out some deadfall, and while I appreciate the effort, I can’t help but chuckle when I see the axe marks – it’s a slow way to cut wood. Amazingly, axes were used for falling some of the largest timber ever recorded, until the crosscut saw was introduced in the 1880’s. It was also around that time that the oxen gave way to the horse, which was eventually replaced by rail and truck logging. 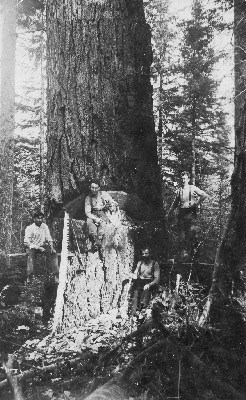 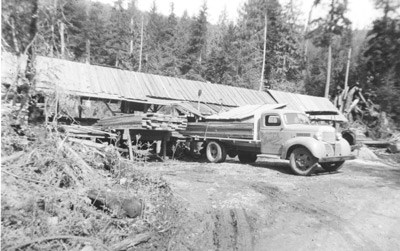 Continuing upward past classics like Ladies, Expresso and Oilcan, I eventually find myself at the 6th switchback, at the top of Bitchecutioner, where I munch on a Clif bar and happily zone out for a while. This was the first trail I ever rode on Fromme, and I can still remember the nervous anticipation of that ride. I also remember the old truck frame in the forest next to the trailhead that we speculated about periodically. Was it abandoned there or did it miss the corner on an icy autumn day? Before I get too warm and fuzzy, I drop in. 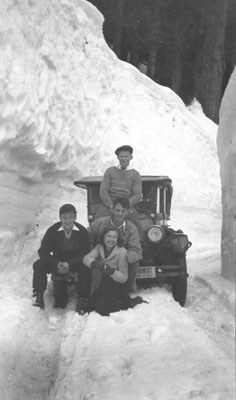 Be thankful that we don’t have snowbanks like this anymore. Climate change FTW.

The trail peels away downhill through a few rocky corners and over some rocky ledges that have grown a bit with time. But I’m feeling balanced and confident and the tires skitter over slick surfaces with the grace of ballerinas. Some parts of the trail are like old friends, other parts I don’t recognize at all – either the recent trailwork has rerouted them or the increased traffic that inevitably follows trailwork has worn them into something entirely new. I bump and bounce through bigger holes and burlier lines that make me thankful for the long travel, grippy tires, and powerful brakes that we have nowadays. 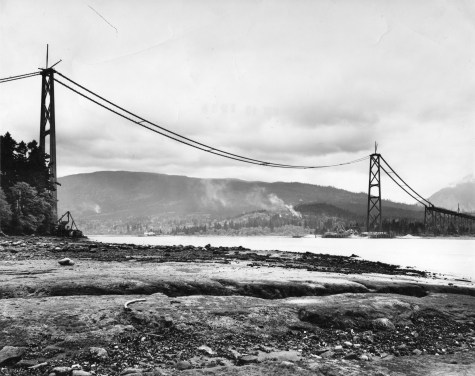 Eventually I reach the lower junction and I make a right onto Dreamweaver and pedal a short ways uphill into a nice section of old growth forest with a nice tall canopy. This steep western side of Fromme, above the din of Mosquito Creek was the last part of the mountain to be logged, with most of the old growth cut down around the turn of the century and only a handful of fine examples left for posterity. If you hike down the hill amongst the numerous skid roads, you’ll find these gems still standing and you’ll also find remnants of an old GVWD water line that followed the creek to the upper falls. 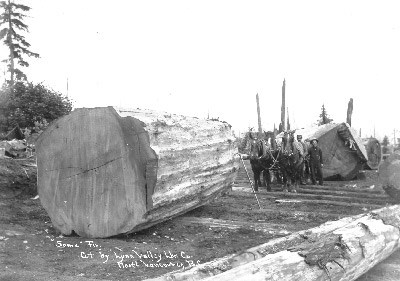 Back on my bike, I turn downward once again with rays of the sun’s fading light filtering through the ancient canopy. The trail surface is smooth and fast and I pick up speed quickly, sweeping through Dreamweaver’s quick turns and short rises. It’s a fantastic trail that has opened a lot of eyes to the merits of bench-cut trail construction and the elusive chainless/brakeless flow that feels so good. In much too short order I’m back on the intricate rockwork of the Baden Powell, putting my suspension through its paces. 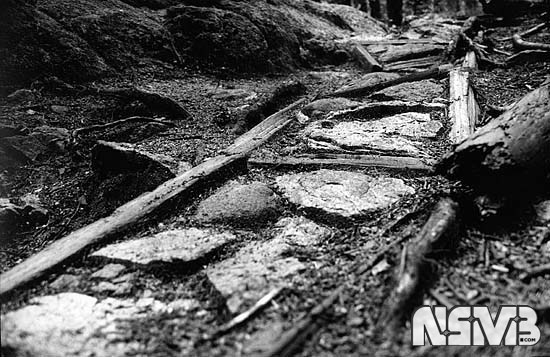 By the 1930s the western side of Fromme had been all but abandoned, with just a couple small hand-logging operations and some stubborn homesteaders remaining. Cabins from the forestry boom of years past served as midway points for Grouse-bound hikers until the dilapidated structures were inevitably burned through carelessness. 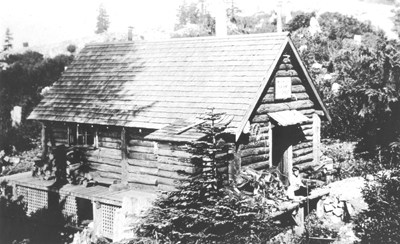 The Munday Cabin below the Grouse Mountain Chalet, 1926. 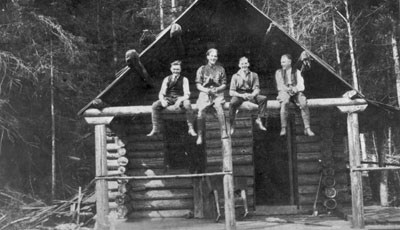 A cabin on Mosquito Creek.

As I pick my way through the maze of old corduroy and dogwalker trails, I spot a remnant of these cabins – an old tower, either for electricity or a telegraph line. I survey the surrounding woods, looking for any hint of human occupation but, as is the case with so much of the history in these mountains, it’s been taken back by the forest, only to exist in books and memories. 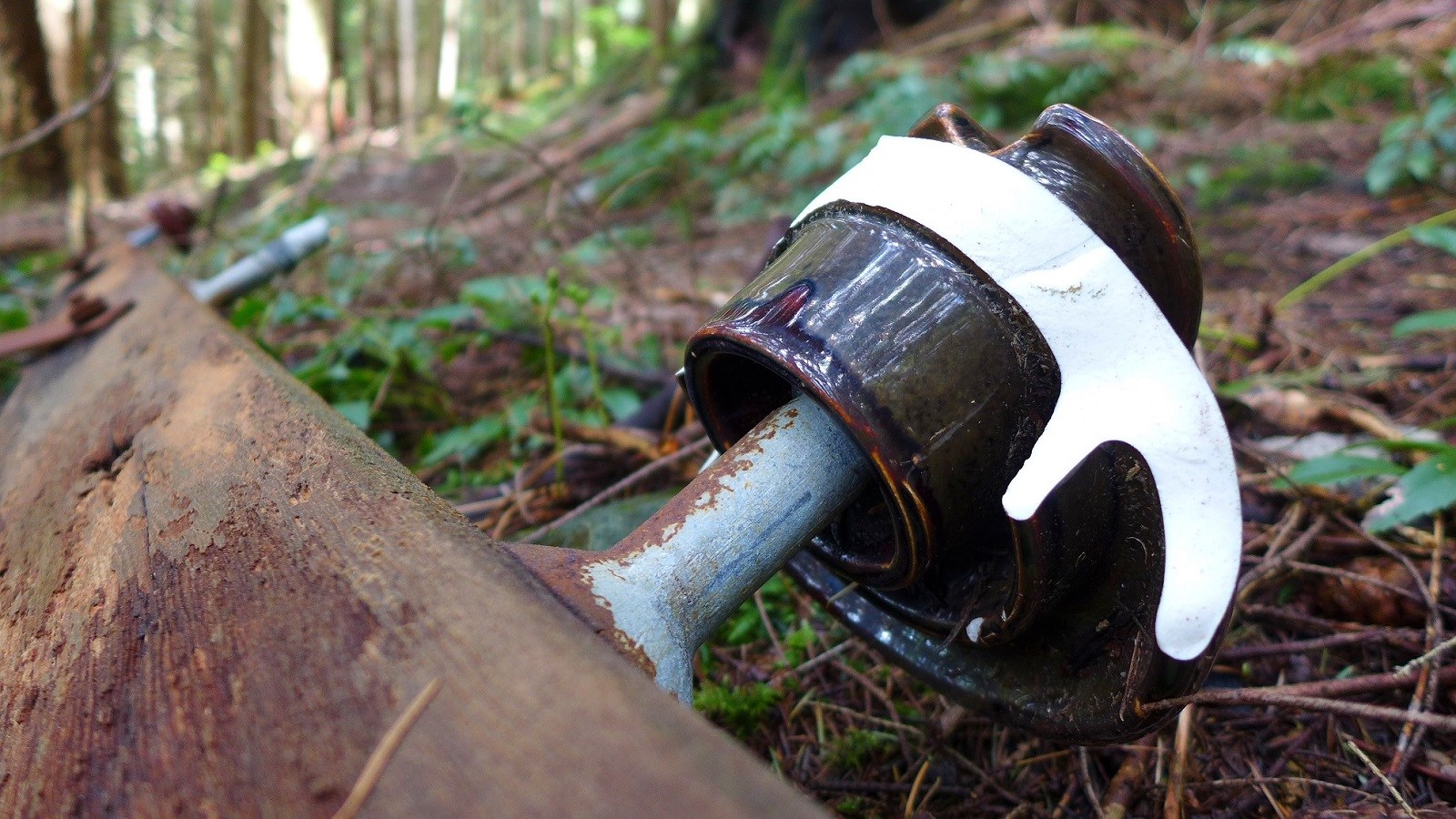 Maybe KenN can tell us what this is.

I hit the streets again, spinning westward toward Lonsdale Avenue, blinded a little by the sun as it nears the horizon. With the day coming to a close, I think about the history I’ve pedaled through and all the layers of change that have settled upon the original roots of this community. It makes me wonder where we’ll be in another 100 years and what kind of legacy we as citizens and mountain bikers and trailbuilders will leave. It’s a big subject and, with a beautiful sunset before me, I’m content to just ride my bike, remembering the past, living in the moment, and hoping for the future.

We weren’t the first and we certainly won’t be the last. Thanks Bryce for another trip through the relics!

Great series. I had no idea that Mtn Hwy was open to the public. What could go wrong?

Reminder for history buffs - The Lions Gate Bridge will be 75 years old on Nov 14.

Great series, and lots of pics I hadn't seen. Thank you.

Would be good for Monica to see how much improved the environment is now, and to learn that her frog pond was in fact man made.

The pic of 1st switchback is amazing, boy how things have renaturalized since then!

Without the legacy of logging we wouldn"t have such great access to the hills as we do now. Nor would Vancouver be here for us to enjoy.

That photo of the first switchback blew my mind, I had no idea the road was ever that… road-like.