The Other Side of the Fence

An extremely bitter, cynical and slightly delusional take on the cycling event known as the Joyride Slopestyle of 2013… 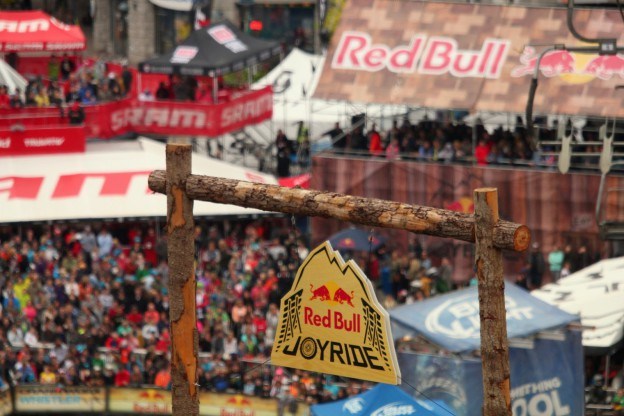 What’s going on? Where are we? Who does a triple whip over bus length gaps? How do these guys bounce back after hitting the ground so hard? Why are there rocks on the side of the course? Is this what it feels like to be old, baffled by the pace at which things are passing you by? Why so many questions? Why so many cameras? Why bananas? Why tuck? Where did all of these people come from? Do they all ride bikes? Who drinks all this Red Bull anyhow? What is that taste?

These are all great questions one could ask and answer as a tool to build a perfectly solid introduction to a photo essay around. Instead, let’s deviate wildly with a random tangent. 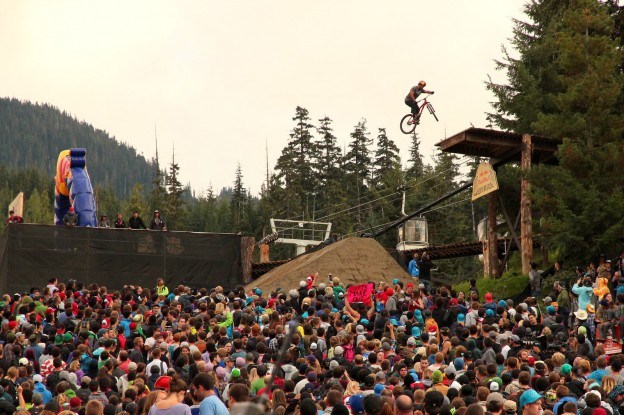 Remember a few years ago, when you would watch the Slopestyle, and there’d be a few things on course and you’d find yourself thinking “Yeah…I could hit that”? Those thoughts are funny. You wouldn’t drop that. Yannick Granieri lays down the official first drop trick – Some sort of 360 variation. 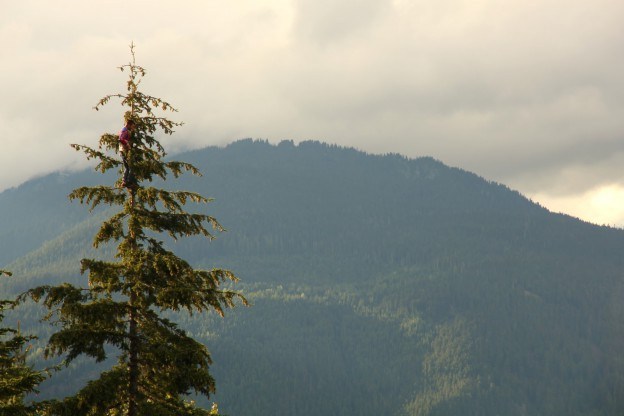 Has a spectator ever died at a slopestyle? I’ll put some money down on this guy being the first at some point in the future. 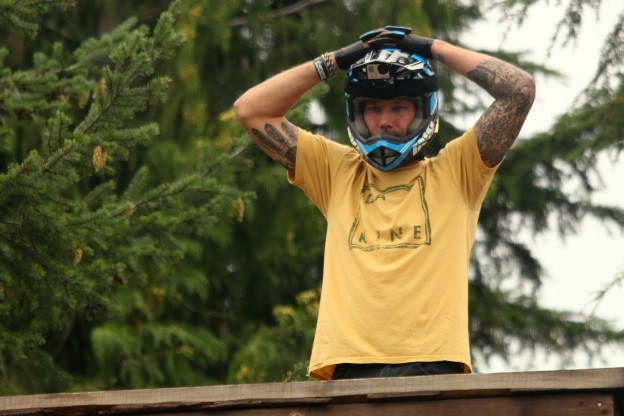 Don’t worry about that guy conked out on the landing of this drop, Gully. You’re up next! On a side note… who didn’t take a photo of Gully standing on this drop? People really like Gully. 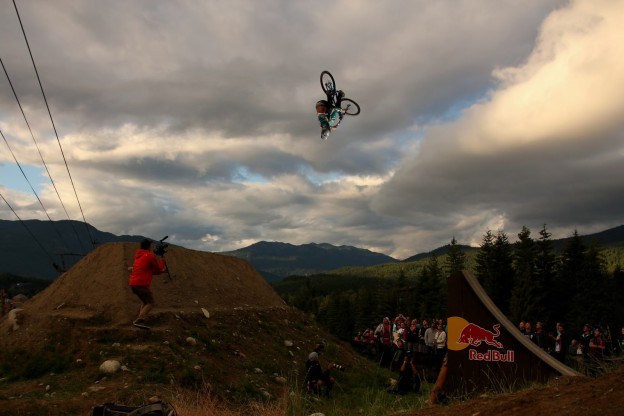 I have no idea who this is… I think I caught somebodies flash though… Take enough shots and you get lucky sometimes. Lucky meaning you happen to catch somebodies flash…not like…oh whatever.

I had the sweetest fake ID back then. The first one was actually my friends fake ID that he had made for him on a class trip to New York City. The photo looked nothing like me and the lamination was paper thin. It was called a “United States Identification Card” or something like that. The only thing that salvaged it was that it had fingerprints on the back. Everybody assumed it was legit because it had fingerprints on the back.

Somebody, somewhere high up in Crankworx owns stock in a Thunder Stick manufacturer I’ll bet. 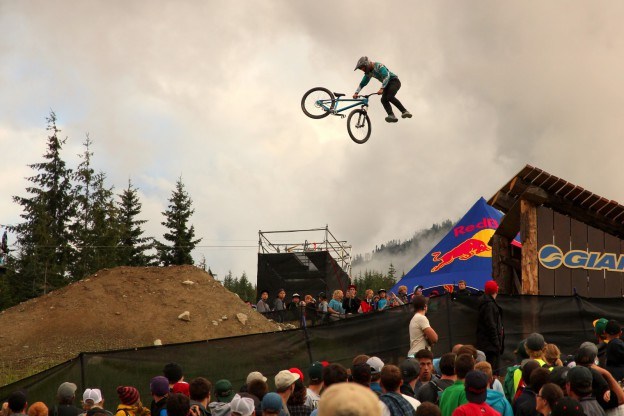 Not bad for a 19 Year Old. Anton Thelander introduces himself to Whistler, gets a prize.

When another friend of mine turned 19, I took over his fake ID. It was from a knuckle dragging mouth breather that we had both gone to high school with. I think he turned 20 before we graduated. That was a gen-you-wine British Columbia Drivers License and that got me in anywhere. Heck, I was doing beer runs for my brothers 25-year-old friends with that thing. 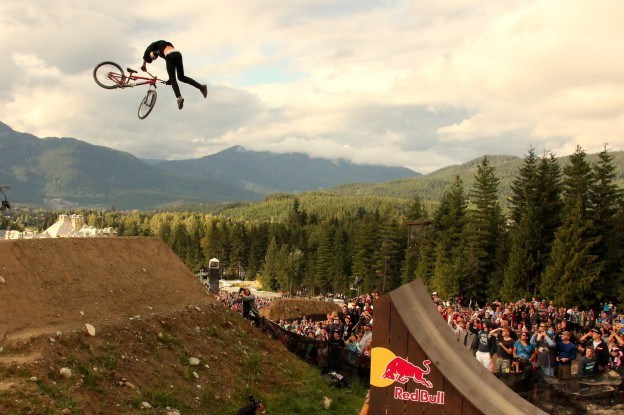 This was not the triple whip that Martin Soderstrom did off the same jump later on in the evening. But we can pretend that it was.

Oddly, the most difficult place to underage drink was at our Vanier Park Residence dances that happened every couple of months. See, they only let residents in to these dances. While “Dave Tolnai” was a resident of good old Place Vanier, “Mark Smith” was not. They would not let that bum in. It made things difficult. 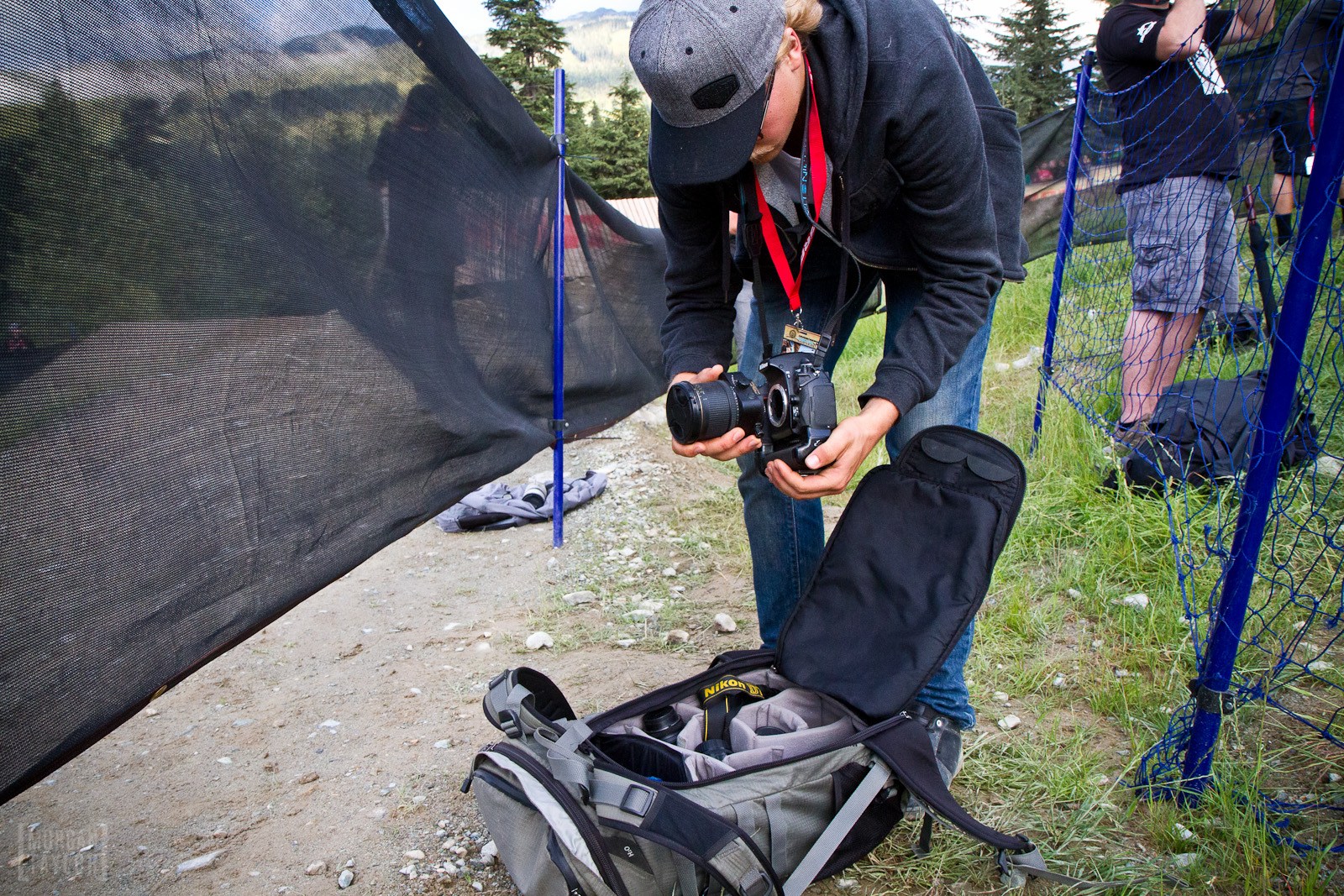 The lower class media corral. Five feet of slop between the fans and the action. Just enough room for Reuben Krabbe to put his tilt-shift on and make miniature slopestyle photos. Photo Morgan Taylor. 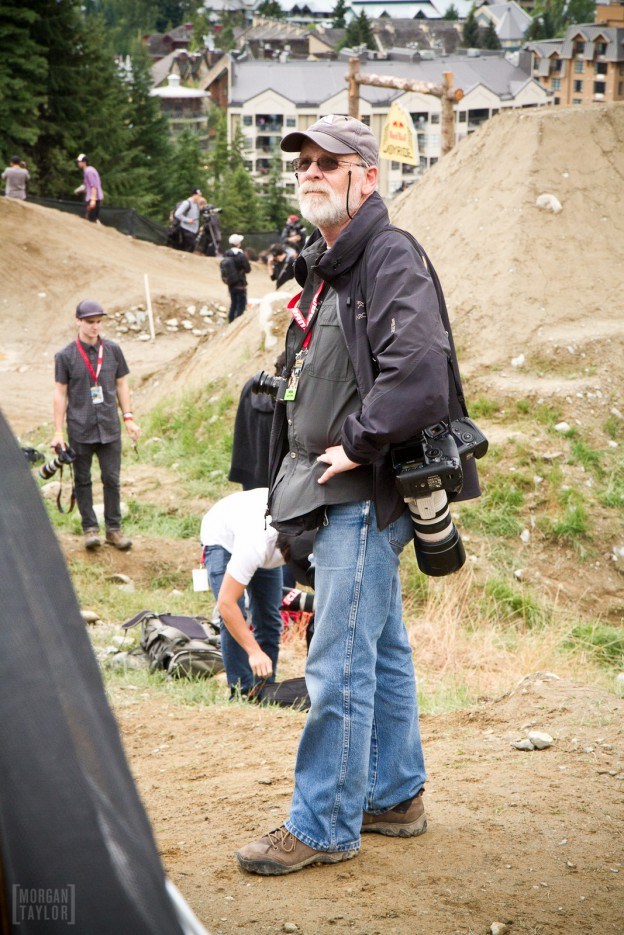 Once again, I brought a knife to a gun fight. What you can’t see is that in addition to the two DSLR’s hanging on his shoulder and a sweet Leica hanging around his neck, he also has another SLR on the other side. Me, well I couldn’t even get my own decent shot of the guy. Photo Morgan Taylor.

It was coming up on the stupid Halloween dance, and everybody was going (that’s another favourite pastime of University students, doing what everybody else is doing). The situation looked bleak. But lucky for me, I was a University student and there was alcohol involved, so my brain dug deep and had a solution within a few minutes. Everybody was allowed one guest! All I had to do was get my friend to put “Mark Smith” on the guest list, I’d flash my fake ID and we were golden.

Where do you get this many banana suits?

The night of the dance came and I got ready, content with my ingenious solution. We underage drank some pre-drinks in our room and were off to the dance. Even better, when we got there, a guy I knew from first year who was now a Residence Advisor was working the door (we’ll call him “Jeff”). It was all coming up Millhouse. 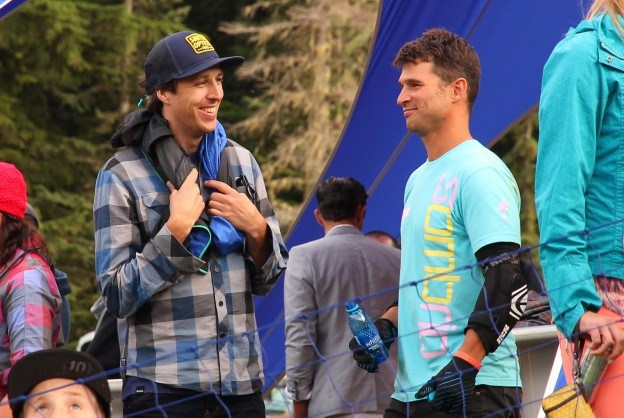 Dude. I’m serious. Just table your bike a bit and drop your one hand casually do the side. It’ll kill! 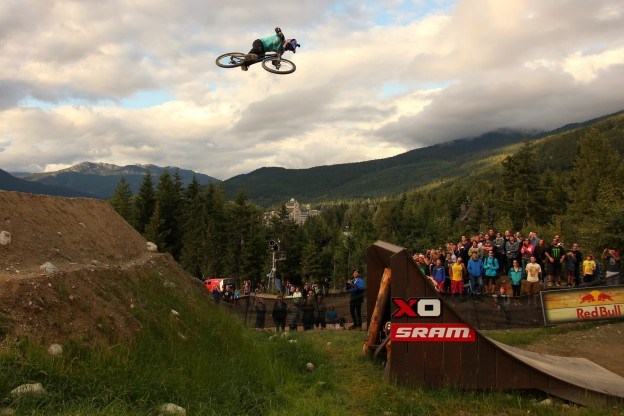 Or you could just lay down a big old 360… Yah… That’s way better, actually.

Flummoxed! All that hard work, down the drain. I couldn’t really hold it against Jeff though. He was just doing his job. Luckily, as stated above, we were University students and we were talking about alcohol. This was nothing but a minor hiccup. 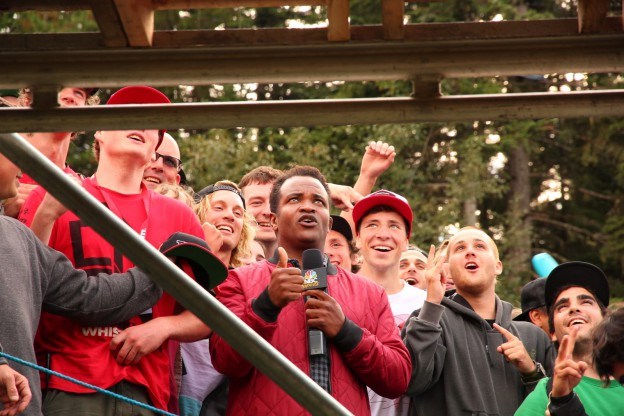 You know things are big time when Sal Masakela is on the scene. 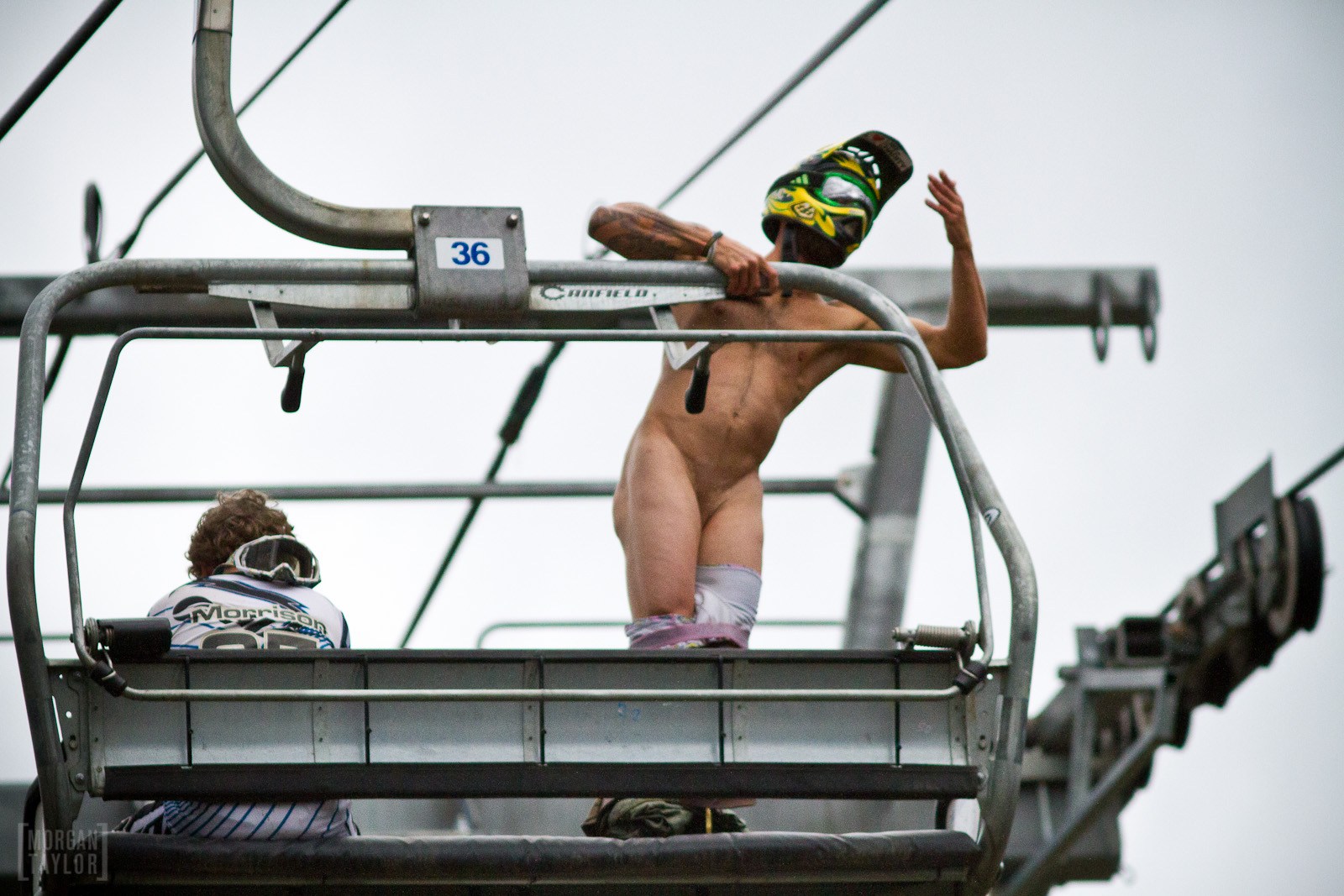 He was probably checking out this guy. Second-most photographed dude at Joyride after Gully. Photo Morgan Taylor.

All the students deemed okay to drink were given a stamp on their hand. That stamp only showed up under black light. I grabbed my friend and we went and found somebody who had a black light in their room (what University student doesn’t have a friend with a black light in their room?). We looked at the stamp and I drew it out on my own hand in yellow highlighter. Back to the dance, flash the hand, I’m in and drinking. No worries. 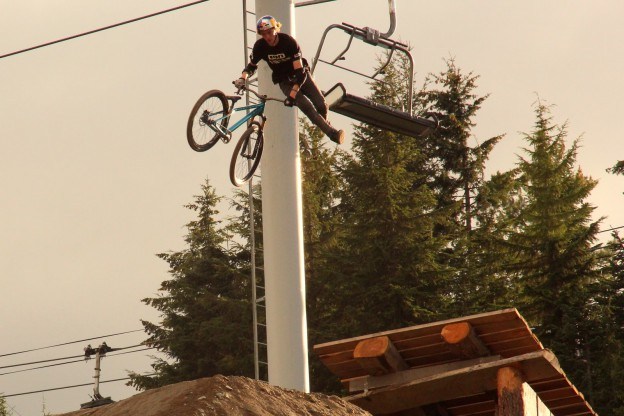 This photo was taken moments before Thomas Genon rocketed off the side of the landing over a field of boulders. These guys are tough. 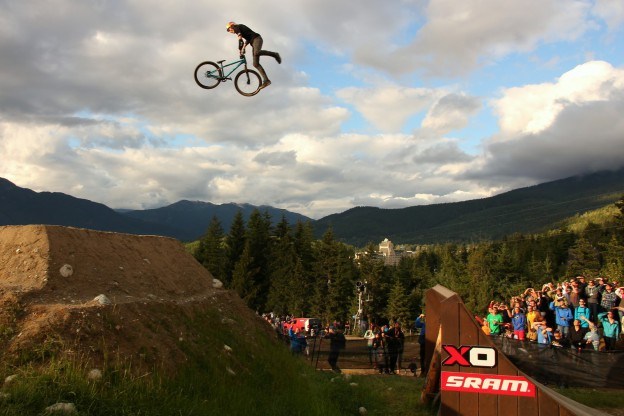 He was more successful here.

So we’re barely two drinks in and I feel a tap on my shoulder. It’s Jeff. My “friend” the advisor. Congratulating me on beating the system? Giving me a friendly wink-and-a-nudge with a no-hard-feelings? No. Throwing my ass out. That power tripping juice monkey was going out of his way to throw my ass out of the beer garden! I mean…what the hell? It’s one thing to not let somebody through when you’re surrounded by your peers and some schmuck is trying to pass off a fake ID in a well lit hallway…but to go out of your way to track him down once he’s gamed the system and is quietly throwing back a few pops in a darkened room? That’s a dick move. He quickly became one of my least favourite people ever and I made his life difficult for the rest of the year. 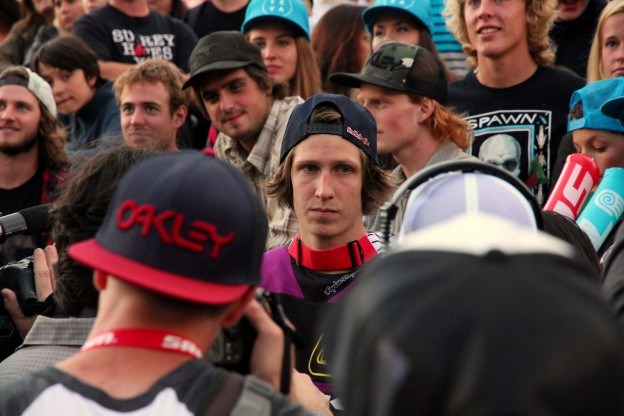 Everybody wants a piece of the champ. I realize that I have not included any action shots of Mr. Semenuk in this piece. I felt that enough have been shown already.

So congratulations Crankworx. You’re the steroid using, authority seeking, fun killing jerk of the Slopestyle circuit. Why you gotta make life so difficult on us poor media? Why you gotta go so far out of your way to crush the ambitions of us poor 99 percenters on the wrong side of the fence? 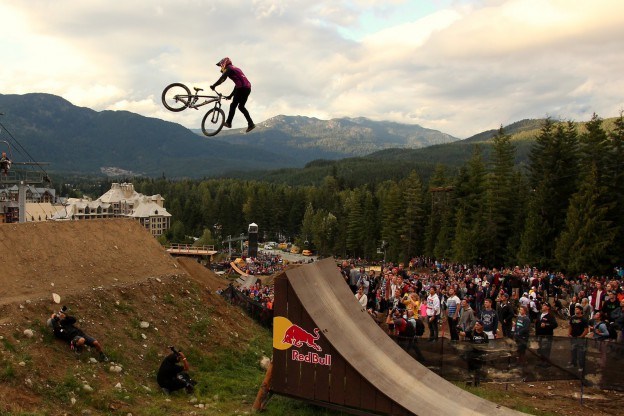 Okay. Fine. One action shot of Semenuk. Ya. I know. Pretty much the same shot as the one of Soderstrom. Angles are tougher to come by when you’re on the outside of the fence looking in.

Well excuuuuuuuuuse me, Crankworx, for trying to share your event with the mountain bike community. Sorry for trying to buy my kids an ice cream cone every once in a while. What are they going to eat for dinner tonight, anyhow, Crankworx? Corn Flakes? Who’s going to pay for the scurvy medication? You, Crankworx? Cause I sure am not.

Okay. One more bonus photo. Just because I like it. Wouldn’t have included it in the story though.

What? You came here to read about bikes?

Dave’s story is about as relevant to slopestyle as slopestyle is to the rest of mountain biking these days. Have you ever felt like you were on the other side of the fence?

So you're complaining that your front row seat media pass, that got you standing in front of 25,000 people but behind 30 photographers wasn't good enough? Or are you saying that Crankworx was cooler 5 years ago when you had the gold star media pass and could go inside the last row of fences? That it was "core" when there was 10,000 fans, but now it's "corporate" because there's 25,000?

Hating on Crankworx is so hot right now.

New's flash: It's a circus. It's a pro-show. It's a drunk fest. If you can't enjoy it maybe it's time to go photograph some weddings or high school yearbooks.

You can't know what you don't know. No thanks for filling me in on what I didn't miss. Sounds like you guys made the best of it anyways…

Pleb gets reminded he's a pleb, gets upset on the internet.

My girlfriend got tired of my complaining. I needed a bigger audience.

“You get a shot on the cover of Bike magazine? Oh, you did. This year? No? Other side of the fence!”

That line is gold.

love this crankworx article .. Best part about the naked dude was the 10minute wrestling match between him and a security guard right in front of the cabin.. It ended with the crowd chanting "get up" "get up" then the naked dude stood up while wearing the security guard as a towel shook him off and ran naked back into the crowd… Im not sure what they are paying the security at crankworx but it was enough for that guy to wrestle a naked man and lose.

I hid in the valley with a 29r and XC lid all week. Made for good times. Sometimes it's better not to try and beat the system.

I too was in the land of limbo. not with the masses, but stationed as an animal for the people to watch in our cage running back and forth trying to get something ok. Was better then nothing.

Better than nothing, for sure. Yet oddly difficult.

Hilarious write-up.
I was also on that other side of the fence, carrying a massive ass video camera and tripod through swarms of drunks to try and re-locate.
Drunks, my most favoured and loathed type of people.